Read The Case for a Creator Online

The Case for a Creator 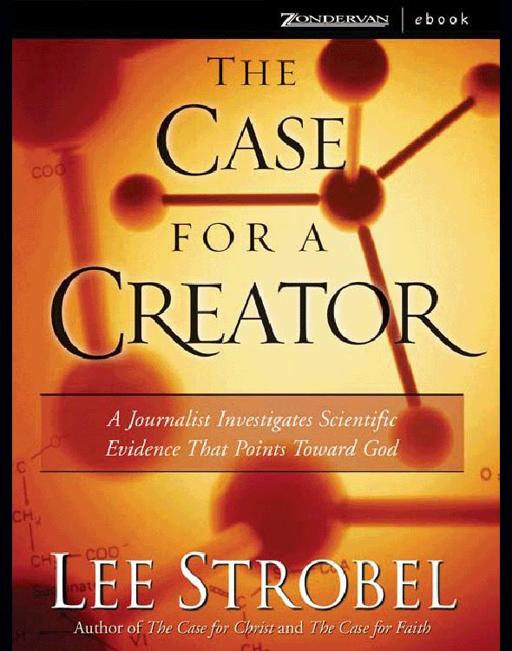 The Case for a Creator

The Case for a Creator
audio

The Case for a Creator—Student Edition
(with Jane Vogel)

The Case for Christ

The Case for Christ
audio

The Case for Christ—Student Edition
(with Jane Vogel)

The Case for Easter

The Case for Faith

The Case for Faith
audio

The Case for Faith—Student Edition
(with Jane Vogel)

Experiencing the Passion of Jesus
(with Gary Poole)

Inside the Mind of Unchurched Harry and Mary

Surviving a Spiritual Mismatch in Marriage
(with Leslie Strobel)

What Jesus Would Say

THE
CASE
FOR A
CREATOR

A Journalist Investigates Scientific
Evidence That Points Toward God

This title is also available as a Zondervan audio product. Visit www.zondervan.com/audiopages for more information.

All Scripture quotations, unless otherwise indicated, are taken from the
Holy Bible: New International Version
®
. NIV
®
. Copyright © 1973, 1978, 1984 by International Bible Society. Used by permission of Zondervan. All rights reserved.

The website addresses recommended throughout this book are offered as a resource to you. These websites are not intended in any way to be or imply an endorsement on the part of Zondervan, nor do we vouch for their content for the life of this book.

The Images of Evolution

Doubts about Darwinism
An interview with Jonathan Wells

Where Science Meets Faith
An interview with Stephen C. Meyer

The Evidence of Cosmology: Beginning with a Bang
An interview with William Lane Craig

The Evidence of Physics:
The Cosmos on a Razor’s Edge
An interview with Robin Collins

The Evidence of Astronomy: The Privileged Planet
An interview with Guillermo Gonzalez and Jay Wesley Richards

The Evidence of Biochemistry:
The Complexity of Molecular Machines
An interview with Michael J. Behe

The Evidence of Biological Information:
The Challenge of DNA and the Origin of Life
An interview with Stephen C. Meyer

The Evidence of Consciousness:
The Enigma of the Mind
An interview with J. P. Moreland

The Cumulative Case for a Creator

Appendix: A Summary of the
Case for Christ

T
he deadline was looming for the “Green Streak,” the afternoon edition of the
Chicago Tribune
, and the frenzied atmosphere in the newsroom was carbonated with activity. Teletypes clattered behind Plexiglas partitions. Copy boys darted from desk to desk. Reporters hunched over their typewriters in intense concentration. Editors barked into telephones. On the wall, a huge clock counted down the minutes.

A copy boy hustled into the cavernous room and tossed three copies of the
Chicago Daily News
, hot off the presses, onto the middle of the city desk. Assistant city editors lunged at them and hungrily scanned the front page to see if the competition had beaten them on anything. One of them let out a grunt. In one motion, he ripped out an article and then pivoted, waving it in the face of a reporter who had made the mistake of hovering too closely.

“Recover this!” he demanded. Without looking at it, the reporter grabbed the scrap and headed for his desk to quickly make some phone calls so he could produce a similar story.

Reporters at City Hall, the Criminal Courts Building, the State of Illinois Building, and Police Headquarters were phoning assistant city editors to “dope” their stories. Once the reporters had provided a quick capsule of the situation, the assistants would cover their phone with a hand and ask their boss, the city editor, for a decision on how the article should be handled.

“The cops were chasing a car and it hit a bus,” one of them called over to the city editor. “Five injured, none seriously.”

The city editor frowned. “Gimme a four-head,” came the order—code for a three-paragraph story.

“Four head,” the assistant repeated into the phone. He pushed a button to connect the reporter to a rewrite man, who would take down details on a typewriter and then craft the item in a matter of minutes.

The year was 1974. I was a rookie, just three months out of the University of Missouri’s school of journalism. I had worked on smaller newspapers since I was fourteen, but this was the big leagues. I was already addicted to the adrenaline.

On that particular day, though, I felt more like a spectator than a participant. I strolled over to the city desk and unceremoniously dropped my story into the “in” basket. It was a meager offering—a one-paragraph “brief” about two pipe bombs exploding in the south suburbs. The item was destined for section three, page ten, in a journalistic trash heap called “metropolitan briefs.” However, my fortunes were about to change.

Standing outside his glass-walled office, the assistant managing editor caught my attention. “C’mere,” he called.

“Look at this,” he said as he handed me a piece of wire copy. He didn’t wait for me to read it before he started filling me in.

“Crazy stuff in West Virginia,” he said. “People getting shot at, schools getting bombed—all because some hillbillies are mad about the textbooks being used in the schools.”

My eyes scanned the brief Associated Press report. I quickly noticed that pastors were denouncing textbooks as being “anti-God” and that rallies were being held in churches. My stereotypes clicked in.

“Christians, huh?” I said. “So much for loving their neighbors. And not being judgmental.”

He motioned for me to follow him over to a safe along the wall. He twirled the dial and opened it, reaching in to grab two packets of twenty-dollar bills.

“Get out to West Virginia and check it out,” he said as he handed me the six hundred dollars of expense money. “Give me a story for the bulldog.” He was referring to the first edition of next Sunday’s paper. That didn’t give me much time. It was already noon on Monday.

I started to walk away, but the editor grabbed my arm. “Look—be careful,” he said.

I was oblivious. “What do you mean?”

He gestured toward the AP story I was clutching. “These hillbillies hate reporters,” he said. “They’ve already beaten up two of them. Things are volatile. Be smart.”

I couldn’t tell if the emotional surge I felt was fear or exhilaration. In the end, it didn’t really matter. I knew I had to do whatever it would take to get the story. But the irony wasn’t lost on me: these people were followers of the guy who said, “Blessed are the peacemakers,” and yet I was being warned to keep on guard to avoid getting roughed up.

“
Christians . . . ,
” I muttered under my breath. Hadn’t they heard, as one skeptic famously put it, that modern science had already dissolved Christianity in a vat of nitric acid?
1

From the gleaming office buildings in downtown Charleston to the dreary backwood hamlets in surrounding Kanawha County, the situation was tense when I arrived the next day and began poking around for a story. Many parents were keeping their kids out of school; coal miners had walked off the job in wildcat strikes, threatening to cripple the local economy; empty school buses were being shot at; firebombs had been lobbed at some vacant classrooms; picketers were marching with signs saying, “Even Hillbillies Have Constitutional Rights.” Violence had left two people seriously injured. Intimidation and threats were rampant.

Separate Beds by Elizabeth Buchan
Between a Rockstar and a Hard Place by MacIntosh, Portia
The Man Who Was Thursday by G.K. Chesterton
Not Just Friends (Brookfield) by Wolfe, Lacey
Penelope by Rebecca Harrington
Wild Bear by Terry Bolryder
Put Your Diamonds Up! by Ni-Ni Simone
Creamed at the Coffee Cabana: A Cozy Mystery (Sweet Home Cozy Mystery Series Book 1) by Constance Barker
The Book of M by Peng Shepherd
Love in Bloom by Sheila Roberts