Read The Chronicles of Lumineia: Book 02 - The Gathering Online

The Chronicles of Lumineia: Book 02 - The Gathering 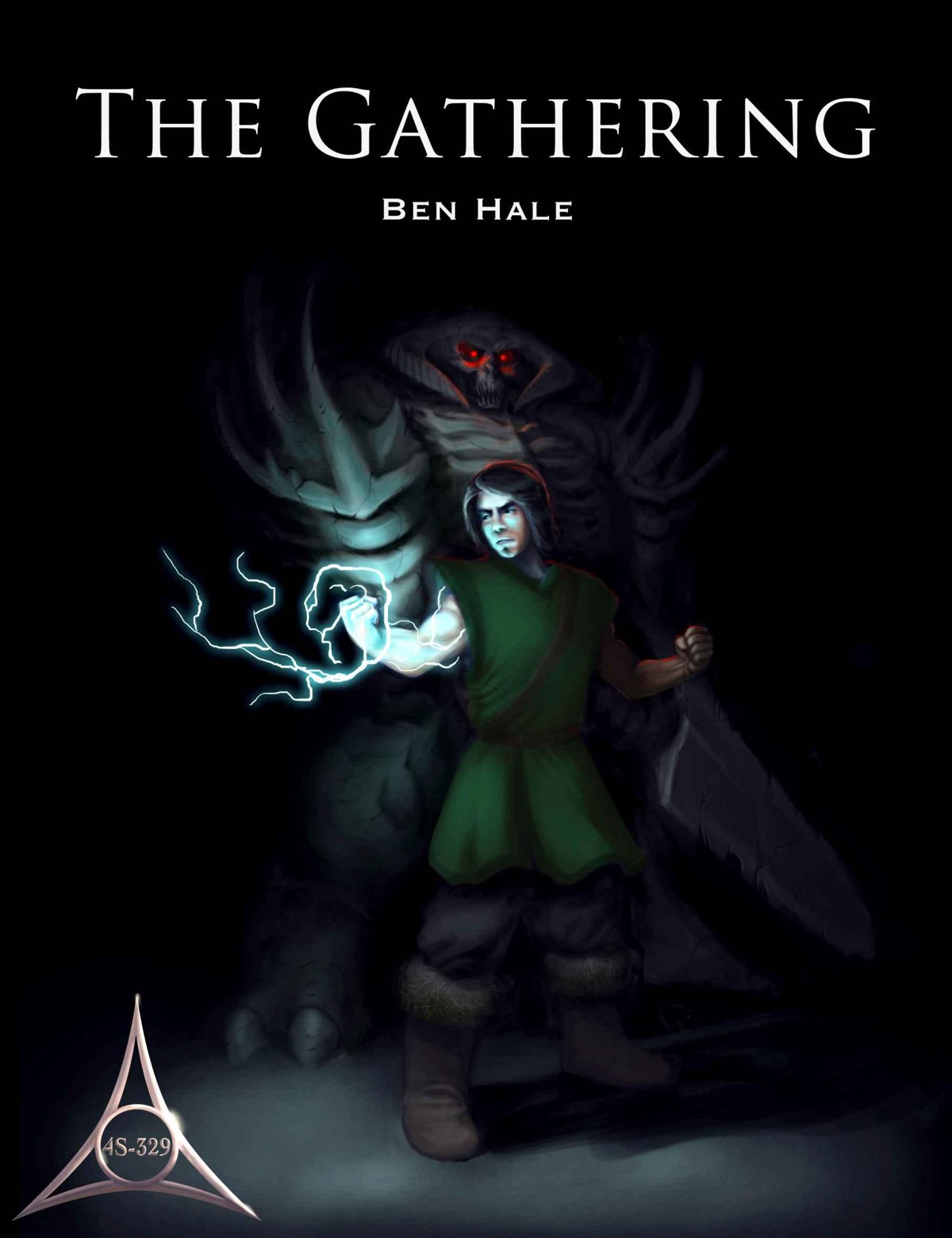 To my family and friends, who believed.

And to my wife, who is perfect.

Chapter 2: The
Power of a Prophecy

Chapter 8: Origin
of a Thief

Chapter 10: The
Hawk and the Mind

Chapter 11: Everyone
Has a Purpose

Chapter 13: A Light
in the Dark

Chapter 21: The
Flesh of War

Chapter 25: The
Cost of Greed

Chapter 32: All
Gathered In

Siarra
advanced between the snarling fiends on either side of her, knowing they were
only held in check by their absolute fear of her—and that wouldn’t last long.
She just hoped it was long enough. With cautious steps she worked her way past
the various creatures trembling in their desire to tear her asunder.

Quare
dominated the bulk of the vicious army. The man-size fiends boasted a mane of blood
red fur that barely showed on their ink colored skin. Although they carried no
weapons, they had already slaughtered thousands with their bare hands. Rippling
muscles bunched and clenched throughout their bodies, and their manes flared in
anger as she passed. She knew they could tear a man in half, and they would try
to do the same to her.

Sipers, dogs
the size of lions, growled and snapped at the air swirling in her wake.
Lightning fast, they were the first to close off her path behind her, blocking
her in. The hard, arrowhead scales that covered their bodies shimmered from
pure black to a deep crimson as they sensed the kill. Opalescent eyes glittered
as she passed through a pack of them, and she did her best not to shudder.

In between the
sipers and quare, the kraka captains towered over the other fiends. Blanketed
in white bone armor that grew from their own flesh, they dragged massive
obsidian swords as if they were too heavy to carry—until they whipped the sword
through an elf faster than the snap of a whip. Earlier in the battle she’d seen
a single kraka annihilate an entire company of humans before being taken down
by a lucky ballistae bolt. A hundred dead in a matter of minutes, and there
were hundreds of thousands of krakas around her.

Then
Skorpians, huge beasts as large as a wagon with tails that grew black bone
spears in minutes, spears that could be launched with a snap of their tail to
embed into solid rock. If that wasn’t enough, their dual pincers could cut
through armor and bone like it was parchment. Their exoskeleton had prevented
all but the most powerful attacks from penetrating . . .

—A Siper
lunged at her, hatred surpassing its fear. As quick as thought she sidestepped
the lunge and lifted a spike of earth to impale it mid-flight. She turned from
the dying creature and stared at the black horde, until once again their fear overcame
their boiling hate. For one brief instant she relished in the feeling of power.
She had faced down an army of billions, and they had blinked first.

But the
thought was fleeting, and her courage waned, so she resumed her steady walk
forward. Slow and sure she moved as far from the broken gates of Azertorn as
she could. Each precious step moved her further from the city, but it wasn’t
distance she needed, it was time.

The cliff and
city had been under siege by an almost unlimited host of fiends for less than
six days.
How could so many have died in six days
? And they still had to
survive until the light fell on the seventh day. Part of her recognized it
wasn't her fault, but she couldn't shake the great weight that hunched her
shoulders. As the Oracle of Lumineia, she was the most powerful mage throughout
the kingdoms, and had guided the races to unite.

Somewhere,
somehow, she had failed.

Before her
thoughts could continue, a ripple coursed through the army and she came to a halt.
Like the wind had shifted, she knew. This was the spot of her last battle. On
all sides, fiends snarled and growled, roared and pawed the ground, each
waiting for her to attack. She stood firm, hoping the extra seconds might make
a difference. If she moved first it would only be a matter of time before they
overwhelmed her. She had to give the allies time to fortify, to prepare for the
next onslaught.

Deep down she
knew it wasn’t enough, that her desperate bid to give them time would fail. She
knew she couldn’t hold them off, but it wasn’t in her to give up. She knew she
would die, and then everyone in Azertorn would perish. Looking at the curled
muzzles and dark, bloodthirsty mass surrounding her, she wondered where the
allied races had lost, where she had made a wrong decision.

What in
heaven or earth could have turned aside this holocaust?

Siarra took
one last look at the vast cloud of black that had enveloped the sky, leaving a solitary
column of sunlight from the city to the clouds, piercing the encroaching
darkness and causing the heavens to shine on Azertorn. Even as she watched, the
black roiled and pressed against the waning light and she knew that it was
time.

Returning her
tired gaze to the rippling sea of black, she listened to the fiends gathering
their courage and readied herself for the fight of her life. The unnatural
peace lasted only a few seconds, until an enormous Kraka began to charge. From
deep within the legion he roared, a bellow of rage that echoed off the scorched
and broken cliff as he began to pick up speed. The entire evil host rippled in
anticipation, ready to strike when the armored hulk reached her tiny elven form.

Barreling
towards her, the massive fiend snarled in defiance and pumped its legs like a
galloping steed. Its obsidian blade bounced through the dirt behind him,
kicking up a spray of soil as he thundered across the ground. Fifty paces away
. . . then twenty . . . then ten, and finally the huge beast snapped the giant
sword high—but Siarra was quicker.

Lifting her fingers,
she raised the ground in front of him just a few inches, and tripped him before
he could get in range. The fiend’s roar turned to a cry of pain as he slammed
into the unforgiving ground and tumbled forward. Before the impending wave of
creatures could descend upon her she used a gust of air to push the dark blade
underneath the rolling body, forcing him to land on his own sword. When the fiend
came to a stop, it didn’t move . . . but Siarra wasn’t there to see it.

The catalyst
had come, and the sea of fiends flooded towards her, bent on erasing her from
existence. In an instant she became a whirlwind of action. Her hands blurred
into motion and air flew into enemies, knocking them flying. With a stomp of
her foot the ground exploded outward, thundering into anything nearby and
crushing them into each other. Clenching her fist she sent a wave of ice
missiles lancing through armor and bone alike. The sharp projectiles dropped
them where they stood, but more jumped over their twisted forms before they had
even stopped breathing.

Siarra spun
and twisted, blasting magical attacks into the bodies of her enemies. Fire
exploded and burned when she pulled heat from the air, lightning jumped and
arced as she gathered the charge from the sky, stone rose up to obliterate dark
forms at her command, and the very light from above scorched them where they
stood . . . but it was not enough.

Bit by bit the
encroaching wave pressed inward, over the bodies of hundreds of their dead
comrades. Each strike now came within feet of hitting home, then inches . . .
then it was too late.

—A Siper
dodged every attack and leaped at Siarra from behind, taking her down. Tasting
fear, she rolled and blasted him away, but other claws were already descending
towards her. She called on what was left of the forest of Numenessee and long
roots sprang from the ground to crush the surrounding fiends, but they came too
late. A claw had gouged into her leg, causing her to cry out in pain. Seconds
later her arm was almost ripped off by a Quare, and she burned him to ash. The
heat from the magical fire shimmered off her body before another form materialized
through the dark dust. Smashing into her, it sent her hurtling backwards.

Her frail body
tumbled through ranks of fiends, barely protected by a film of energy that blanketed
her skin. Desperately she poured her strength into its power, shocking anything
that tried to strike her—but it wasn't enough. Driven by bloodlust, some forced
their way through the shield, at the cost of their own lives. When she came to
a halt, her right side had gone numb, two ribs were broken, and she could feel
blood seeping from her body in too many places to count.

A giant kraka
stood above her as she coughed and fought to bring her magic to bear. Shrugging
aside her effort, he took a moment to cut down a Siper that had slunk past him.
Fighting for breath she squirmed as he raised his black weapon. His bellowing
challenge caused her to flinch and lose what semblance of focus she'd regained.

She had probably
killed several thousand in the last few minutes, but now she could do nothing
but scream and watch the blade descend towards her neck—

—Siarra awoke
thrashing and screaming with her blanket wrapped around her, cutting off her
air. She tore it away and gasped for breath, reaching to touch her throat. As
her death faded from sight, she realized that what she had seen had not been a
nightmare. It had been a vision.

It was her
future.

It took
several minutes for the images of dark fiends to fade from her eyes. Reaching
out she found the rock wall at the head of her bed and sat up, gesturing at a
flameless torch to lighten the room.

A spontaneous
shiver shook her body and she pulled the shredded covers, still damp from her
sweat, around her shoulders.
Pull yourself together,
she told herself,
and took a few breaths to steady her nerves. Once her heart had slowed she
pulled the covers tight and walked to the mirror.

The face
looking back at her was young for an elf, just days over fifty, yet the blue
eyes carried a weight that made her look much older. Her hand reached up and
began to work on her tousled blonde hair, straightening it into submission.
Angular in shape, Siarra's face was beautiful, but even she would acknowledge
that there was a harsh intensity to her look that didn't attract. Frowning, she
turned away and strode to the wide window. Drinking in the cool night air, she
surveyed the magnificent view.