Read The City on the Edge of Forever Online

The City on the Edge of Forever 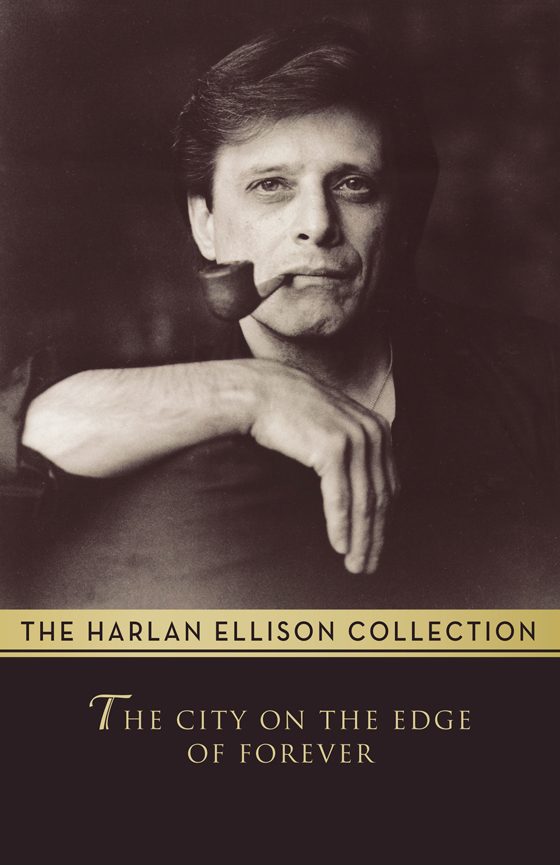 THE CITY ON THE EDGE OF FOREVER

is an Edgeworks Abbey
®
Offering in association with ereads.com.

Published by arrangement with

the Author and The Kilimanjaro Corporation.

are registered trademarks of The Kilimanjaro Corporation.

This edition is copyright © 2008 by The Kilimanjaro Corporation.

No part of this book may be reproduced or transmitted in any form or by any
means electronic or mechanical—including photocopy, recording, Internet
posting, electronic bulletin board or any other information storage and
retrieval system, or by any other method, means or process of embodying
and/or transmitting information, text or the spoken word now known or
hereafter devised without permission in writing from The Kilimanjaro
Corporation, except by a reviewer who may quote brief passages in a critical
article or review to be printed in a magazine or newspaper, or electronically
transmitted on radio, television or in a recognized on-line journal. For
information address Author's agent: Richard Curtis Associates, Inc., 171
East 74
th
Street, New York, New York 10021, USA.

All persons, places and organizations in the teleplay sections of this book
except those -clearly in the public domain–ar
e fictitious and any
resemblance that may seem to exist to actual persons, places or
organizations living, dead or defunct is purely coincidental. The scenario is
a work of fiction.

Star Trek is a registered Trademark of Paramount Pictures.

"Afterword"
copyright ©
1995 by (The Estate of) DeForest Kelley.

The print edition of Harlan Ellison's
The City on the Edge of Forever
includes many additional materials such as magazine clippings, letters and production notes. We found that when resizing these images for e-book resolution they were barely readable. But we wanted the customers who purchased the e-book to be able to enjoy them, so we've housed these images on the E-Reads website. Just visit the following URL:

Only time will tell. Those who deserve thanks in the Hard Times of one year, turn out to be somewhat less deserving in the Harsh Glare of three decades later. We live and learn. Sometimes we live and learn and get so damned angry we forget earlier kindnesses blunted by the ache of betrayal. Which is about as Zen as I care to get.

Back then, when the series was just debuting and I was writing the teleplay you’ll be reading here, both Herb Solow and Bobby Justman were extraordinarily kind to me. Time has passed away, and maybe memory has dimmed, and I ain’t very happy about some of the things these two pals of days-gone have written and said about events covered in this book…but I remember with clarity how they befriended me back then, and I would rather dwell on those times than these. So, I thank Herb and Bob.

Steadfast from the git-go, David Gerrold and John D. F. Black and Dorothy Fontana, whom you know as D. C. Fontana. Years have slipped behind us, the four of us, and Johnny’s beard has grown to truly Moseslike proportions; and David just got around to writing the best story of his career (“The Martian Child”) and they gave him a Hugo and a Nebula for it, and he’s finally managed to shuck off that cloaca of being “just a
Star Trek
tv writer”; and Dorothy, well, despite a truly recent stunning revelation included in her Afterword to this volume, I confess to deep and unassailable admiration and affection. These are four from the old days (and from this four-year agony of putting
City
between covers). It took four years because it was the hardest, probably nastiest, job of writing I’ve ever had to do, and when it was almost finished, Gene Roddenberry screwed me up yet one more time by dying.

Here are the soldiers and scavengers and hustlers and shotgun-riders who helped get this book into your hands. Please kindly do not forget this list. Commit it to memory. When those of you who will get demented at what I’ll be saying in these pages run amuck and come with blazing torches to
schlep
me out of my bed for crucifixion, I’d like to think all these aiders and abetters will likewise dot the landscape with their anguished bodies. No one likes to be the only yotz at the party.

In no particular order:

Mark Evanier; David S. Rosenbaum at Paramount legal; Richard Curtis; Larry Closs, Executive Editor at
TV Guide
; Kevin Ryan at Pocket Books, who served as amenuensis; Sharon Buck; Bill Amend, creator of the wonderful cartoon strip,
Fox Trot
, for allowing me to reprint the gag on page 46 [of the original version of this text]; and to a decent and honorable investigative journalist who cannot be named, and to employees of NBC and Paramount who cannot be named, and to divers correspondents, informants, moles and insiders who cannot be named…my secret thanks to you all. Have no fear: they could pound my balls flat with a steel-stamping press, and they’ll never get your names from me; not even yours, Arthur.

But we got through it, and we’re still alive, so what the hell. Thank you to Scott Cohen, our fecund and idefatigable designer, right up to the blue line additions. Thank you. Thank you particularly to the remarkable Laura Perkinson, White Wolf’s demon editrix on this project. Her attention to detail, her delicious punctiliousness, her dogged commitment to producing an error-free text, cannot be praised highly enough. Thank you. Now go put a cold compress on your brow.

The good friends who wrote the Afterwords. Each a star, each with better things on which to spend time than writing a coda to this book. But they did it. Because they’re stand-up. I am in the debt of each of you. (Not to mention Stewart Wieck.)

If it were not for Susan, trust me on this, I would long-since have taken to the streets with an assault rifle. You can all thank your lucky stars she’s here on my behalf—because frankly, it’s been
decades
since I was a responsible person.

N
ot once, but many times
.

Not just in private chats
,

and where it counted
.

For thirty years he knew

the truth and wasn’t afraid

this one is for 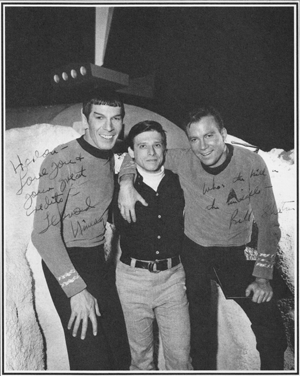 The author with Leonard Nimoy and William Shatner, in 1966, on the set of STAR TREK® with the inscriptions, "Who's the kid in the middle – Bill Shatner" and "Harlan – love you and your great credits – Leonard Nimoy."

WOULD YOU BUY A USED GALAXY FROM THIS MAN?

GENE RODDENBERRY SPEAKS TO THE CROWD
.

In answer to a question about the writers on the original
Star Trek
series: “Most of those I don’t want in the same room with me. I’ve given all of them a chance. Harlan got a chance on the first show and wrote a $350,000 estimate budget show in those days when we only had $186,000. And when I told him to cut the budget, he sent me back a note that said, ‘Do it with special effects.’ He then submitted his original script for a Writers Guild Award, and when he won the prize, which he deserved for the script…except that many people would get prizes if they wrote scripts that were budgeted out at three times the show’s cost. I rewrote that script for Harlan, and it won the Nebula Award, which he rushed up on stage and took credit for, too…David Gerrold has been condemning the show constantly, although I had him on staff for many months. He never wrote an episode we could shoot. So beware of these people that are loud voices. Give your attention to people who quietly do good work.” (Thunderous applause.)

Elliott, Kate - Crown of Stars 3 by lp,l
The Contingency Plan (The Lonely Heart Series) by Nelson, Latrivia
Leo by Sheridan, Mia
Walker Pride by Bernadette Marie
Fitz by Mick Cochrane
Waiting for Her Soldier by Cassie Laurent
Home to Roost by Tessa Hainsworth
Hannah Jayne by Under Suspicion
Civilian Warriors: The Inside Story of Blackwater and the Unsung Heroes of theWar on Terror by Prince, Erik
The Ninja's Daughter by Susan Spann