Read The Clue of the Screeching Owl Online

The Clue of the Screeching Owl 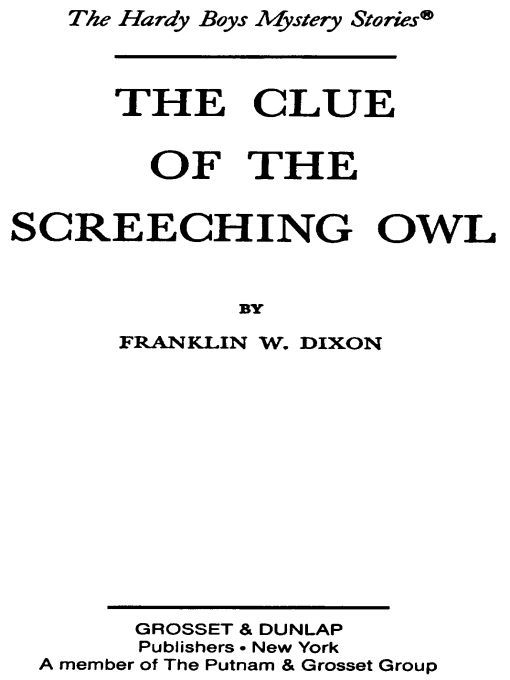 Table of Contents
Title Page
Copyright Page
Â
CHAPTER I - Puma Charge!
CHAPTER II - A Midnight Scare
CHAPTER III - An Eerie Trail
CHAPTER IV - The Windowless Cabin
CHAPTER V - A Reluctant Sheriff
CHAPTER VI - Unusual Bait
CHAPTER VII - The Hermit
CHAPTER VIII - Rock Barrage
CHAPTER IX - Setting a Trap
CHAPTER X - Sketch of a Thief
CHAPTER XI - The Tailor's Clue
CHAPTER XII - Chet's Ruse
CHAPTER XIII - Worrisome Watching
CHAPTER XIV - Flash Fire
CHAPTER XV - Ragged Footprints
CHAPTER XVI - The First Find
CHAPTER XVII - Help!
CHAPTER XVIII - A Harrowing Rescue
CHAPTER XIX - Prisoners!
CHAPTER XX - Triumphant Sleuths
Â
THE CLUE OF THE SCREECHING OWL
When dogs and men suddenly disappear, and strange screams fill the night, fantastic stories of vengeful ghosts are almost believable. It is these strange happenings which bring Frank and Joe Hardy to the Pocono Mountains to help their father's friend, a retired police captain, solve the mystery of Black Hollow.
But when the Hardy boys and Chet Morton arrive at Captain Thomas Maguire's cabin on the edge of the hollow, he has disappeared. In the woods the boys find only a few slim clues: a flashlight bearing the initials T.M., a few scraps of bright plaid cloth, and two empty shotgun shells which had been fired recently.
Frank and Joe are determined to find the captain, despite Chet's misgivings after a night of weird and terrifying screams. Neighbors of the missing man insist that the blood-curdling cries are those of a legendary witch who stalks Black Hollow seeking vengeance.
Strangely, it is a small puppy that helps the boys disclose a most unusual and surprising set of circumstances, involving a mute boy, an elusive hermit, and a fearless puma trainer.
Readers who relish the chill of suspense and the thrill of adventure will find plenty of both in this exciting story of mystery in the Pocono Mountains. At that moment two venomous snakes slithered
out of the cave 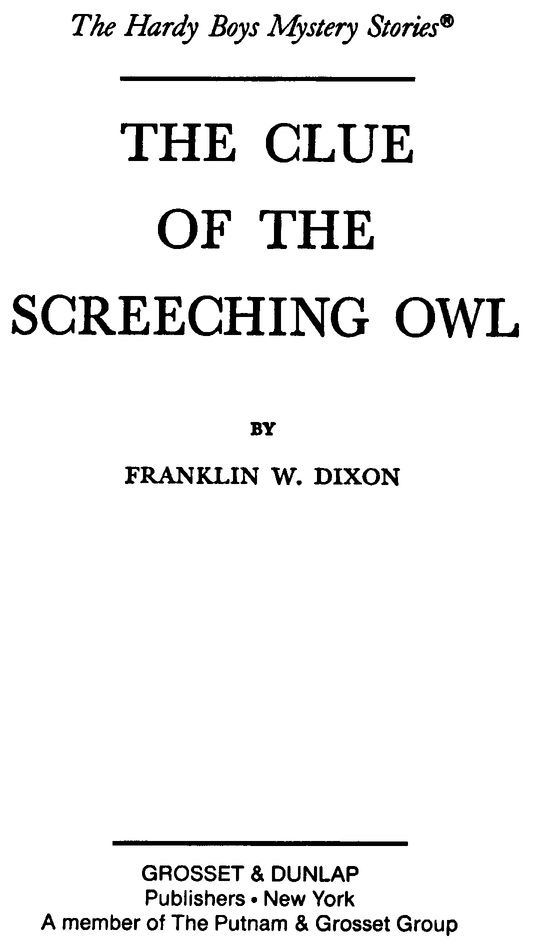 CHAPTER I
Puma Charge!
“SUMMER vacation!” Chet Morton exclaimed.
“No more school until September.”
The stout, good-natured boy lounged half asleep between Frank and Joe Hardy in the front seat of a powerful yellow convertible. With a soft purr, the car moved swiftly past the carefully tilled fields of the Pennsylvania Dutch farmers.
Dark-haired, eighteen-year-old Frank Hardy was at the wheel. He kept his eyes upon the highway which would lead them to the green bulk of the Pocono Mountains later that sunny June afternoon.
Meanwhile, his blond-haired younger brother Joe said, “There used to be witches around here, Chet. See that sign? It's to ward them off.”
He pointed to a brightly painted circular design on a huge red barn.
Chet Morton had opened an eye as the car moved past the barn. “What is it?” he asked.
“A hex sign,” Joe told him. “Supposed to keep off lightning and protect the farm against witches.”
“Witches!” The plump boy straightened up, looking worried. “Today?”
“Sure,” Joe Hardy went on teasingly. “If a witch puts a spell on your cow, she won't give milk. Those circles keep off the curse.”
Nervously Chet looked at the next two barns, at the blue sky above him, and then once all around him.
“Aw, nobody believes in that kind of stuff any more. This is the twentieth century. Stop kidding me, will you, fellows? This is a vacation. All I'm going to do is sleep and eat. Let's not have any mysteries!”
While their friend settled down and closed his eyes once more, Frank and Joe exchanged knowing grins. As sons of the internationally famous detective, Fenton Hardy, they had many times been drawn into baffling and dangerous mysteries, where their brilliant sleuthing had earned them fine reputations of their own. Easygoing Chet Morton, the Hardys' best friend, always seemed to become involved.
“Well, Chet,” Frank said, “you may as well know the truth. This isn't just a camping trip. We have to look up Dad's old friend, Captain Thomas Maguire. He's living in a cabin at the edge of Black Hollow, somewhere in those mountains just ahead of us.”
“Captain
Maguire?” repeated the stout boy suspiciously. “What kind of captain is he?”
“A police captainâthat is, he was chief of police until five or six years ago. He's retired now.”
“I knew it!” Chet exploded. “I just knew it! Another mystery! A fellow no sooner gets set to enjoy a nice, quiet vacation than the Hardys drag him into some detective work.
“When the police and the Hardys get together, it spells trouble. Trouble for old Chet especially. All rightâI may as well hear the worst. What is it this time?”
“Well,” Frank answered, “there have been some funny goings-on around Black Hollow. Captain Maguire wrote Dad. He didn't give any details, but asked him to come up and investigate.”
“Unfortunately, Dad couldn't make it,” Joe took up the story. “He's been working with the New Jersey State Policeânot very far from here, in factâon a new hijacking racket. Among other things, somebody has been stealing shipments of instruments that go into the nose cones of guided missiles. They're taken while being trucked to the assembly station.”
“That's important, all right,” Chet agreed.
“Dad heard about our camping trip and suggested we take it near Captain Maguire's cabin,” Frank finished.
“Well, Chetâshall we turn back?” Joe needled. He and Frank knew that underneath his complaints, their friend had plenty of courageâand even more curiosity.
“I suppose we can't call it off now,” Chet mumbled. “All our food would go to waste!”
It was midafternoon when the prosperous valley of the Pennsylvania Dutch, lush with the tender green of young crops, had been left behind. The road climbed and curved up a heavily wooded hill. Now and then the thick foliage on either side was broken by a smooth gray rock face.
“We're really in the mountains,” Joe noted.
After topping a ridge, the road descended and then straightened out as it approached the next line of hills. Frank, looking ahead, could see the buildings of a town.
Suddenly the stillness was broken by the raucous sound of music and voices blaring over a loud-speaker. They strained their eyes to see where it came from.
“I see it!” Chet shouted.
Two Ferris wheels and a number of tents came into view. A bright, gay banner on top of one read:
KLATCH'S CARNIVAL
“Whoops!” Chet shouted eagerly. “Let's go in, fellows. I can smell the popcorn from here!”
Laughing, Frank parked the convertible, and the three boys entered the midway. Now the din of the loud-speakers was overwhelming. Crowds of people moved in both directions. The ridesâthe “Whip,” the “Octopus,” and several others whirled madly. The people on them screamed shrilly. Barkers were shouting from side-show platforms.
Chet immediately bought himself a carton of popcorn, a bag of peanuts, and a frothy cloud of pink cotton candy.
“Say, how about this?” Joe asked. He pointed to a sign:
COLONEL BILL THUNDER
Fearless Animal Trainer
The roar of some wild animal, coming from within the tent, was enough to convince the boys of the colonel's courage. In a moment Frank, Joe, and Chet had entered and taken seats.
In the center of a large circular cage stood a man dressed in a white shirt, white riding breeches, and shining black boots. His thick, dark hair, mustache, heavy eyebrows, piercing eyes, and the black whip that he held coiled in one hand gave him a look of authority. He needed it, for seated on small stools at equal distances around the cage were four huge cats.
Two were tawny, two black. All four glared at the man, their long tails flicking nervously.
“Pumas,” Joe whispered to his companions. “Big ones, too.”
The black whip snapped. The trainer's body rotated as he forced each powerful animal, in turn, to leave its stool and then mount it again.
“This fellow's really good,” Frank declared. 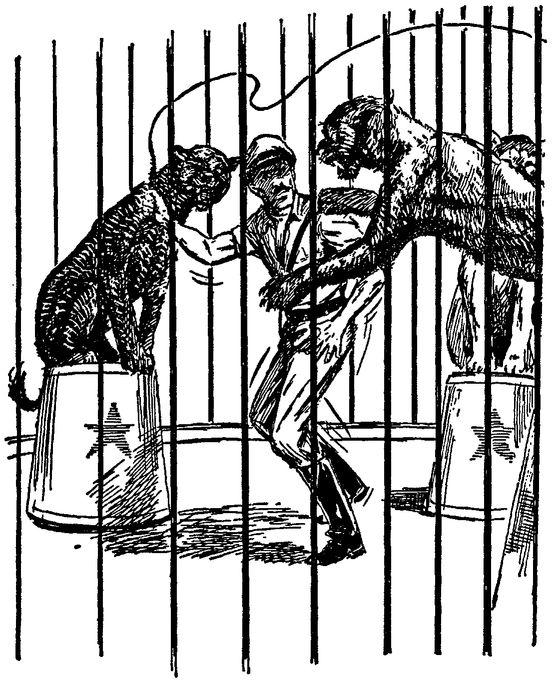