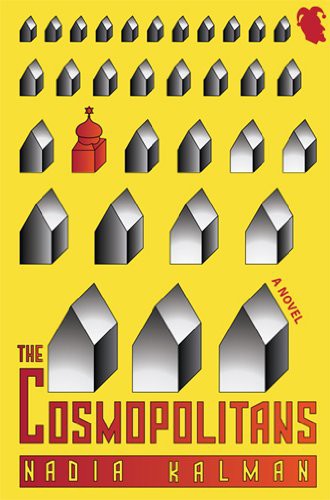 The University of West Alabama

All rights reserved, including electronic text

Printed in the United States of America,

to persons living or dead is coincidental.

Livingston Press is part of The University of West Alabama

and thereby has non-profit status.

brothers and sisters, we need ’em.

Where are you sailing to? If Helen were not there,

What would Troy be to you, young warriors of Aegea?

They are none of them fans of tradition. Tradition is for great-
grandparents, and not even for theirs, who traded their shtetls for the
Universal Struggle.

Was it traditional to leave Mother Russia, to leave it truly, not
just to sit on the floor listening to an imitation folk bard sing about it?
They flew to the land of the free, and they worked towards diplomas
in computing, and after a few years, they could afford boom boxes
to play the old wistful songs, they could afford to be tearful when
they listened.

They would categorically disagree with all of the above. They
would tell me I am generalizing like a Marx. They would ask, Why I
don’t write about Samuel: he never attended a single computer class
and look at him now, a home health aide and a cocaine addict, have
you ever heard of a vocation and an addiction so mismatched? Why
don’t I write about Pasha, who owned a wig store and was always
offering us free front pieces, because “
Pochemu i net?”
why not?
Who died butting her car into a highway divider, who may have died
on purpose?

I say, it’s no exception to think you have an exemption. Then,
bowing my head, I admit that when I say all, I mean most, and when
I say most, I mean my brother Osip’s family, the Molochniks of
Stamford, Connecticut. Nothing to do with you, Valera Stas Sasha
Abram Yosha Genady Zoonia Manya Margarita Natalya Kiril Foma
Galina Rachel. How could I write about you? How could I remember
you, or you me?

Stamford has its North, nearer to New Canaan, home to
formerly famous pro wrestlers and Gene Wilder; and its South,
where we Molochniks live. However, Connecticut gives even its
undistinguished residents ways to distinguish among ourselves. My
brother’s family lives across from a gas station, but his wife can say
they live in a Tudor. I live in a low-income housing project, but I can
say I live in Augustine Manor, for that is what our developer, who
installed a bidet in every toilet and a coat of arms below the “No
Solicitation” sign, chose to call it.

I’ve climbed to the roof, free from my neighbors’ footfalls, their
warring cooking smells, ignoring my knees and the No Trespassing
sign, for one reason only: to scratch out a pleasant, simple tune.

“That’s not how it starts, you know,” one of the uncles said.
There were three uncles at the table: a doctor, an editor-Quaker, a
novelty tee shirt maker; all tall, all dark, all maybe-handsome if they
weren’t so old, in their forties, maybe. Milla was twenty-one, at a
Seder with her boyfriend Malcolm Strauss’s family, in a Manhattan
apartment on the park, with unwashed hair (it had been a last-minute
invitation), her lip balm under one leg, her leg under Malcolm’s hand,
pecking with her spoon at a matzo ball and guessing at etiquettes, a
large and poorly concealed pimple on her chin.

“No one in America knows how
Anna Karenina
really starts,”
the uncle went on.

“What?” Malcolm’s mother Jean said, her hands at her throat.
She’d wanted to be a musical-theater actress, but was a divorce
lawyer instead.

“Everyone in the English-speaking world just quotes it like that.
The original translation was incorrect, but it was a tremendous hit, so
they just kept it.” Milla was now fairly sure it was the doctor uncle.
He was the most confident one, according to Malcolm. Everyone
had always thought he would win the Nobel Prize, and even though
he hadn’t, even though the tee shirt maker was wealthier, and the
editor-Quaker more cultured, the doctor remained the grandmother’s
favorite.

“So how does it really start, then?” Jean said. “Milla, you must
know.”

Eight? Twelve? Sixty? beautifully groomed heads turned
towards her. Malcolm squeezed her leg. “Actually, I think it does
start: ‘Happy families are all alike,’ just like in the translation,” she
said.

“Yes, but Russian people are very educated,” said one of the
aunts. She was now Milla’s favorite. Milla would remember her by
her, well, her fatness, which just made her all the more beautiful
and maternal. “Pasha, for instance,” the aunt continued. “Our
‘housekeeper’?” She made scare quotes around the word with her
fingers and a few Strausses smiled. “In Russia, she was a dentist.”

“The first line of the book, aren’t you listening?”

Malcolm smiled, leaned back in his chair. “I’m just a music
major.”

“What do you
do
with a music major?” Jean asked the group.
She pointed at Malcolm like a cop about to shoot and he pointed
back at her and Jean smiled, letting him off for now.

Looking around the table, Uncle Doctor said, “
Anna Karenina
starts with the couple arguing, and
then
Tolstoy puts that line, as an
explanation. I read about it in the
New Yorker
, I’m pretty sure, so…”
He gave a modest shrug.

“When I last reread
Anna Karenina
—” Milla made sure to
pronounce the title with a Russian accent — “it started with ‘Happy
families.’”

“And you read the book in the Russian? The whole thing?” Jean
said.

“Of course,” Milla said, trying to imitate the tone of Jean’s voice
when, earlier in the evening, she’d told the family about a peerless
eye cream. “I’m positive I’m right.” She waved her spoon like a
sickle.

Bobby was Malcolm’s father. Chubby as a seal, he wore a black
suit with lavender stripes, which Jean had bought for him, and had
said nothing for the entire meal, except to agree with Jean that the
suit was, indeed, incredible. “Never read it,” he said now.

“But you went to Harvard!” Jean said. “
And
he’s never seen
The
Philadelphia Story
.”

The aunt who, throughout the dinner, and apparently, throughout
the past three months, had been exhorting them to party as if it were
1999, said, “Send him to the lions.”

Malcolm smiled and said, “I never saw it either. I don’t like that
actress.”

“You don’t like Katharine Hepburn?” Jean’s face now carried an
expression of stupefaction so extreme her eyes had crossed.

“She’s too hard, and I don’t like her voice, and she’s not sexy.”
He was so easy here, everywhere. He slurped a spoon of soup.

“I know your problem,” Jean said.

“What’s that?” As he slung his arm around Milla’s shoulders,
she thought of how well she slept, with his arm just like that, and let
her chest relax into the thought of him.

Attempting to prove she was loud, boisterous, even, Milla
ventured, “You know, in Russia, there’s this saying,
v teehom omute
cherti vodyatsah
, devils live in quiet waters. So, you never know.”
Silence. Deep-set Straussian eyes stared from all directions.

“Great
broth
,” the uncle who made tee shirts finally said.

Everything was in confusion in the house of the Molochniks.
The Chaikins were due to arrive in an hour, along with their son,
Leonid, a stock analyst with a face like a potato, who’d bought
himself two mountain bikes, just in case the right girl came along.
That girl, according to Osip’s wife, was Milla, but Milla drooped
through the house, a dying swan in sweatpants. She’d mentioned
the Chaikins’ visit to her boyfriend Malcolm, and Malcolm had said
that if she was seeing other people, he would, too. Osip thought his
beautiful Milla had nothing to worry about — Malcolm was not
a James Bond — but who cared what Osip thought? No one even
cared that he was wearing the fuzzy checkered sweater his wife had
put in the trash the previous week.

Yana, their middle daughter, tried to work the word “clitorectomy”
into every conversation, as if it were the name of a boy she loved,
and had created a mountain of what she called “girl clothes” in the
upstairs hallway, and the mountain was slowly collapsing, skirts
fluttering to the floor whenever anyone passed, and she was taking
photographs of this.

Katya, the youngest, had locked herself in the bathroom again.
Was she dyeing her hair? Cutting off her eyelashes like she had that
one time? Smoking crack, like the police chief’s daughter on
The
Commish
? Creating a viable hydrogen fuel?

My Big Book of Trucks and Diggers [Childrens] by Caterpillar
The Starkin Crown by Kate Forsyth
Thief of Mine by Amarinda Jones
The Warren Omissions by Jack Patterson
When the Bough Breaks by Connie Monk
The 52nd (The 52nd Saga Book 1) by Dela
Your Song by Gina Elle
Lord of Pleasure by Delilah Marvelle
Magic of Three by Castille, Jenna
El asesinato del sábado por la mañana by -Gur[v1]