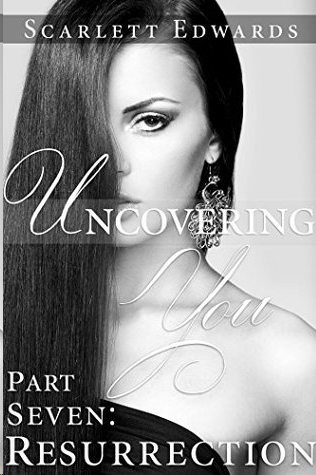 New to the series?

New to the series?

See where it all began with the
Uncovering You Complete First Boxed Set
, now available for $0.99 and only from Amazon:

When I wake up in a dark, unfamiliar room, I have no idea what's waiting for me in the shadows. My imagination conjures up demons of the worst kind.

Reality is much worse:

A collar with no leash. A prison with no walls. And a life stripped of meaning.

I am presented with a vile contract and asked to sign. It outlines the terms of my servitude. The only information I have about my captor are the two small letters inked at the bottom:

Armed with only my memories, I must do everything I can to avoid becoming ensnared in his twisted mind games. But in the end, it all comes down to one choice:

Uncovering You
contains scenes of intense emotional and physical abuse. Readers with sensitivity to such subjects are advised to proceed with caution.

I know why I was taken.

How much does that change things? I cannot say. I still have a weakness for Jeremy—when he is Jeremy. But when he's Stonehart? Well, that's when all of my hatred comes out.

I have to make myself detached, indifferent, and emotionally removed to make the proper decision on what to do next. Jeremy makes detachment hard. Stonehart makes it easy.

What side of him will I get? I don't know. Only one thing's for sure: right now, I'm in the poker game of my life... against the best player in the world.

The young boy brought one trembling hand to the door. He pushed.

It did not budge.

He could not protect her.

Footsteps. From down the hall. The young boy’s head whipped around. His heart caught in his throat.

He was not supposed to be here. It was forbidden, for many different reasons, but only one was pertinent:

Because his father had said so.

Frantic, he searched for an escape. His eyes scanned the empty corridor. There was only one way out: Down the stairs, away from the attic.

Where the footsteps were coming from.

He looked for a hiding place. An open fire roared on the other side of the room. It was a grand room, and rarely used. However, the servants always ensured that no room in the large, soulless mansion lay neglected.

The footsteps were getting louder. The boy could still hear his mother’s crying on the other side of the door. He gave one last, futile push—even though he knew it was useless—and scampered to hide behind the large armchair by the fire.

He peaked from behind the chair back at the entrance to the room. He could see the shadow cast by the person climbing the steps. It grew larger and larger. Fear constricted the boy’s throat. He clutched the book he was holding to his chest like a shield of armor.

But he knew, deep inside, that nothing could protect him.

“Je…remy…” His brother’s singsong voice came to his ears. “Je…remy…. Little Jeremy, where did you get to?”

He saw his brother’s large shape emerge from the flight of stairs. If Jeremy was scared before, one look at his brother was enough to make him terrified.

Robert, at nineteen, was already a full-grown man. He’d be turning twenty in a week. Wide shoulders gave prominence to a bulky frame that suited him perfectly for rugby. A few days of neglecting the razor had left a thick beard on his cheeks. His hair, wild and disheveled, betrayed what he’d been doing earlier with one of the housemaids.

Before fancy struck him to seek out a victim for the night.

The boy did not know why his father tolerated Robert’s nocturnal activities. They were cruel, sadistic. More than once in the past year, Jeremy had woken up to find the family dog beaten within an inch of its life. Each time, he had nursed it back to health—only to have it happen again a few weeks later.

Eventually, the poor beast disappeared. Nobody spoke of it. In fact, Jeremy seemed to be the only one who took notice.

There were other incidents. One month ago, Jeremy discovered a shoebox wrapped in gift paper waiting for him at the breakfast table. He had woken late, and missed the rest of the family. He was alone when he opened it. Inside, he found—his stomach recoiled at the memory—six little parakeets, with their necks horribly twisted, lying in a bed of straw.

He’d brought the box to his father. He’d expected some sort of punishment for Robert, hopefully of the kind he’d received so often…but all he got was an angry scolding for interrupting his father when he was working.

“They’re birds, Jeremy,” his father had said. “Dead ones, at that. They can’t harm you.” Jeremy remembered his father’s sneer. “Don’t tell me you’re frightened of the dead?”

Jeremy closed the box and threw it out. But the image of those six helpless parakeets haunted his dreams for weeks.

“Jeremy!” His name was barked out like a command. “I know you’re here. Show yourself. Father’s angry that you’ve disobeyed his command.”

The young boy closed his eyes and pushed his back into the chair, wishing desperately to meld into the fabric. Robert’s heavy footsteps echoed like artillery shells as he crossed the room. He stopped before the only door and tried the handle. It didn’t move. Robert pressed one ear to the wood. Hearing exactly the same sounds that had lured Jeremy up here, he gave a derisive scoff.

Jeremy pressed his small body tight to the floor. He crawled beneath the chair that he hoped would be his salvation.

“No?” Jeremy could see his brother’s booted feet. They moved around once in a slow circle, and then stopped. The toes pointed directly at the chair. “Then it looks like I’ll have to find you. I warn you, you’re only making it worse.”

Jeremy ducked his head down, pressing his forehead to the floor, and closed his eyes. His whole body shook with fear.

The impact of Robert’s boots against the hardwood floor told Jeremy exactly how close his brother was. Twenty feet. Ten. And then…

The next thing Jeremy knew, he was being dragged out from his worthless hiding spot.

He grunted and kicked and squirmed as his brother pulled him free. Jeremy’s book lay forgotten under the chair.

Robert sat atop him, making it impossible for Jeremy to breathe. He grinned down like a madman.

“What are you doing up here, huh, kid?” he asked. A fist collided with Jeremy’s ribs. Pain exploded up the side of his body. “Looking for mommy?” Another punch. Another searing jolt of pain. “Well, guess what, you useless cunt? Mommy’s not here!”

A flurry of punches rained down on Jeremy’s body. He tried to shield himself from the onslaught.

Robert grabbed Jeremy’s hair and jerked his head up. The sharp agony splintering down his spine was almost enough for Jeremy to break his vow of silence.

Almost. But not quite.

“What do you have to say for yourself, huh?” Robert demanded. “What are you going to tell father when I let him know where I found you?”

Then, the weight on his body was being lifted. Jeremy gasped for air, filling his lungs with the precious nectar.

“Get up,” Robert demanded. He kicked Jeremy in the spleen. “Get up! We’re going straight to father. He’s not going to be happy with you when… Hello! What’s this?”

No!
Jeremy thought.
No, please don’t…

“Oh, you’ve got to be fucking kidding me!” Robert laughed. “No way. No fucking way. You still keep this garbage?”

He leaned down and picked up the book that had been exposed when the chair skidded to one side during the struggle.

Robert held the book high. The front cover fell open. All the pictures that Jeremy loved, that he treasured, flew by as the pages rifled down. The bright blue skies. The green pastures.

“This,” Robert announced, “is utter garbage. Father told you to get rid of it months ago.” His eyes widened, and he turned toward the open fire. Jeremy could see the idea forming in his brother’s head.

“
It-it-it-it-it’s mine,”
Robert mimicked. “I’m going to do what father should have done long ago. I’m going to—“

“
Robert Blackthorne
! You put that book down.”

Jeremy’s head whipped toward the sound of the voice. There, standing in the middle of the open doorway, was his mother. An angry red welt marred half her face, making it soft and puffy. It would bruise horribly by the morning.

Robert froze, halfway through the motion of raising his hand. He glared at their mother. He took one look at Jeremy, another back at her, and then threw the book across the floor.

Jeremy scrambled to pick it up.

“You deserve
everything
father gives you,” Robert spat. “Ungrateful whore.”

And then he stomped out of the room.

Jeremy waited until the footsteps were out of hearing before running and flinging himself into his mother’s arms. Even her gentle hug hurt his new injuries. But Jeremy knew that she could not have known what Robert had done. That only left one answer for why she held him so loosely.

She was harboring similar ones.

But sometimes, the façade became too much to bear.

“You brought our book.” His mother smoothed his hair and touched his cheek. “Would you like me to read it to you again?”

Jeremy bit his lip to stop from blubbering. He nodded.

His mother smiled. The beauty of that smile shone through the ugliness of what his father had done.

I spend the weekend in a state of semi-delirious shock.

Jeremy takes care of me. That sounds like such an unbelievable, ridiculous thing to say. That I would
allow
the man whose plot for vengeance, whose focus on me began over something I had no responsibility for to care for me when the truth finally came out…it makes me seem weak, pathetic, frail.

The Secret Servant by Daniel Silva
My New American Life by Francine Prose
Resonance 4th Edits - Bleeding Worlds Bk 3 by Justus R. Stone
Playing Scared by Sara Solovitch
The Longest Pleasure by Christopher Nicole
Swan Song by Tracey Ward
The End of Eve by Ariel Gore
Summer of the Dead by Julia Keller
Falling Into the Fire: A Psychiatrist's Encounters with the Mind in Crisis by Montross, Christine
Quick Fix by Linda Grimes