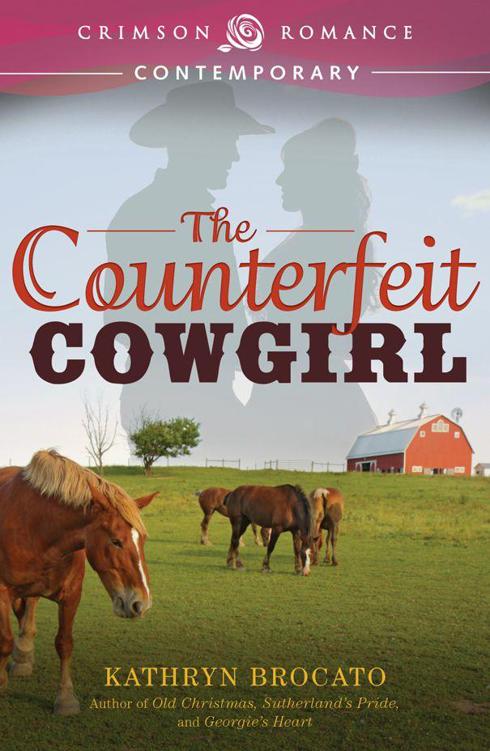 This Book is Dedicated to

Who always wanted to be a Cowgirl

More from This Author

The admiring words came from a tall, rangy man in a cowboy hat who lounged against a car parked outside the grocery store. Felicity Clayton tossed an impersonal smile at him. She had been worried that people in Foxe, the small Southeast Texas Gulf Coast town where she’d just arrived, wouldn’t take notice of her clothes.

So much for that fear. She’d attracted plenty of notice while shopping in the grocery store and was still attracting attention in the parking lot.

From the slim blue denim skirt that skimmed the tops of her high-heeled cowboy boots to the red bandanna-print shirt, Felicity might have just ridden in off the high-fashion range. Even her hair fit the look. She had pulled the shoulder-length brown mass off her face in deference to the Gulf Coast heat and humidity and fastened it at the nape of her neck with a leather clasp that matched her boots.

A turquoise and silver necklace and ring matched the handcrafted silver belt at her waist, and silver horses dangled from her ears. She completed her eye-catching outfit with a leather purse that resembled a miniature saddle. Her purse held a sheaf of business cards bearing the logo of The Cosmic Cowgirl, the western boutique Felicity owned in Nashville, Tennessee.

“You look … mmm, mmm good, babe,” the man added. “A little skinny for my taste, but you sure got class.”

Felicity winked at the rumpled pseudo-cowboy. As a slim woman with nondescript brown hair and brown eyes, she figured she needed all the help she could get from stylish clothing. Otherwise, she might fade into brown anonymity.

“Thanks, cowboy,” she said and prepared to climb into her shiny, white pickup.

The voice carried overtones of suppressed anger that attracted Felicity’s attention. Whoever it was sounded like Johnny Cash. Turning, she stared at a veritable mountain of a man who was climbing down from a dusty blue truck that had just pulled into the parking lot.

He was over six feet tall, with broad, capable shoulders and thick, dark hair. Felicity didn’t blame Leroy for leaving the scene immediately. The new arrival looked madder than a wet bantam rooster.

“He wasn’t bothering me, but thanks anyway.” Her impersonal smile turned into a mischievous grin when she noted the effect the braces on her teeth appeared to have on him. He winced and closed navy-blue eyes.

She caught her breath. Something about him urged her to put extra energy into her smile.

“I’d like to speak to you a moment, Miss Clayton.” He slammed the door of his truck aggressively.

Yes, the man was definitely angry. That and the fact that he knew her name made Felicity doubly wary.

“Whitaker,” he said in a clipped, furious tone. “Aaron Whitaker. Not that it matters. You probably won’t be here any longer than it takes to get the money and run.”

Felicity’s brows lifted in astonishment. “I don’t know what you’re talking about, Mr. Whitaker. But it’s a pleasure to meet you, anyway.” She held out her hand.

Felicity was accustomed to a certain amount of hostility from men with fashionable wives who spent a lot of money in her shop. She was always at her friendliest when meeting them. Except that nobody here knew who she was. Perhaps she sold him a piece of farm equipment a few years back when she had traveled the South selling tractors and combines to farmers.

She studied Aaron Whitaker, refusing to let him rattle her. Saleswomen grew impervious to negative reactions, or they didn’t stay in sales very long. Besides, without his height and those rugged, tanned features, his contemptuous stare wouldn’t have had nearly as much impact. His mouth, a masterpiece of chiseled, stony disapproval, and his square jaw both added to the impression of tough implacability.

She made it impossible for him to ignore her proffered hand. He took it automatically and she noticed his palm was hard with calluses.

She let her gaze glide down him. Weathered, form-fitting jeans hugged his long, muscular legs. He wore scuffed cowboy boots, and a blue work shirt had been rolled up to expose muscular, tanned forearms liberally sprinkled with dark hair.

No wonder he disapproved of her. He was a genuine cowboy fresh off the range, and she was a fashion-house fake. She had never even ridden a horse — at least, not long enough to call it riding. She was all show, whereas this man was the genuine article. Well, too bad. In her line of business, image was everything.

“You favor the cowboy look, I see,” she said, and smiled approvingly. “It suits you.”

“It doesn’t suit you. You look like a rhinestone rodeo queen.” He appeared to realize he was still holding her hand and dropped it. “But that’s beside the point.”

“It’s not beside the point if you have any interest at all in fashion.” She bared her silver-banded teeth at him. “If I sold men’s clothing, I’d offer you a huge salary to advertise for me. You’re the perfect example of a working cowboy.”

Aaron looked as though he’d just swallowed a huge dose of ipecac syrup. He half shut his eyes, as if the glare from her braces blinded him.

“It’s the jeans and the boots,” Felicity said helpfully.

“I don’t give a damn about fashion.” He regarded her with a curious combination of annoyance and dawning respect.

A saleswoman had to keep her skills honed. Besides, Aaron’s obvious contempt brought out Felicity’s besetting sin, the urge to convert people to her point of view. “You favor the man-of-the-earth image. A pair of steel-toed boots — ”

“I don’t favor any such image,” Aaron snapped. “Shut up for a minute, will you?”

Felicity arranged her face into a smile of bland interest. “I’m holding my breath in anticipation, cowboy.”

Aaron’s expression turned as bland as hers. “You won’t be for long. Especially if you’re the woman who now owns Lureen Tucker’s house.”

He threw that out like a challenge. Felicity wondered where Aaron came by his information. She did own Lureen Tucker’s house and had for the past five years. Far be it from her to enlighten him, she decided, taking in his scornful navy gaze and ruggedly disapproving expression.

“My breath is still on hold.” She ignored the trickle of sweat down her back and the damp feel of her heavy denim skirt. Standing in the direct glare of the sun on a humid September afternoon threatened to take the starch out of her, but she wasn’t about to let Aaron Whitaker know that. “What does the ownership of a house have to do with anything?”

Aaron flashed his teeth once more. “Ordinarily, neighborliness is something I prize. In your case, however, I’m making an exception.”

She had no idea what he meant, although she experienced a sinking feeling when she recollected the large brick, ranch-style house some distance from her own little wood-frame house. Glancing over his shoulder, she reaffirmed the sinking feeling. The blue pickup was the same double-cab truck parked in the wide, circular drive at the house next door to hers.

“A child could easily fall down that hole you call a well in the back yard.” He pinned her with an accusing stare. “I expect that nuisance to be properly covered by tomorrow morning, or I’ll sue you. Is that clear?”

“I’m sorry to hear that, Mr. Whitaker.” She couldn’t believe this. “If there’s an open well in my backyard, I’ll certainly see to covering it.”

“See that you do.” Aaron gave her a dangerous smile, his eyes glittering. “Mrs. Tucker says you’re all business. Not one penny of profit escapes you, according to her. Now that I’ve seen you for myself, it’s obvious where every penny goes.”

Suddenly, everything became clear. Felicity sucked in her breath as annoyance replaced her puzzlement.

“I do think first appearances are so important,” she purred. “Don’t you, Mr. Whitaker?”

The expression on the cowboy’s face was priceless.

“In that case,” he said, “maybe you’ll see to getting your property mowed and having that eyesore of a house painted. Otherwise, people are sure to get an impression of you I’m sure you don’t want them to have.”

Felicity was dumbfounded. She had arrived in Foxe barely three hours ago, and already she had made an enemy.

Usually, she never made enemies unless she outsold some of the non-producing, entrenched salespeople. Usually, even her enemies liked her. In fact, Felicity was accustomed to being liked because she always took care to make her colleagues in the sales department look good. What was wrong with Aaron?

She forced a nonchalant shrug. “Sorry, Mr. Whitaker. I haven’t been in town long enough to fully assess the property and what needs to be done to it. But you can rest assured that by the time I leave here, that property will be in bandbox condition.”

She could safely promise him that. Cleaning, repairing, and selling that house was the reason she was spending her first vacation in years in Foxe. Some vacation … barely one day into it, and already the house was causing trouble.

“We’ll see,” Aaron said, eyes narrowed with dislike. “A woman like you is usually full of promises she can’t — or won’t — keep.”

“Just tell me this.” Aaron’s voice dripped with contempt. “Was Lureen Tucker your grandmother?”

Felicity felt her face flush. “She was. However — ”

“How many times did you visit her in the five years she lived here?”

Felicity’s mouth opened, but Aaron cut her off. Worse, two other cars had pulled into the parking lot and she sensed the avid interest of the drivers.

“Well, let me tell you something, cowgirl. I have no use for a woman who treats elderly people like throwaways. That old lady might have been a little spooky, but she was still your grandmother. You never visited her once in all the years I’ve known her. Neither has anyone else in your so-called family. I happen to know her only visitor was an old guy named Fenton Mills.”

Felicity opened her mouth again, but for once the Saleswoman of the Year for three years running failed to get a word in edgewise.

“No one in my family wants anything to do with you. Get that house into some kind of decent shape, then kindly get out of our lives and stay out.”

“Do you have any knowledge at all of what you’re talking about?” Felicity asked, when she recovered her power of speech.

Aaron smiled. The gesture reminded Felicity of a wolf showing its teeth. “That well is an accident waiting to happen, and now that you’ve been informed of it, you’re going to be held responsible if anything happens before you can get it covered. You’d better pray one of my dogs doesn’t fall down that thing.”

He turned and bounded into his dusty pickup with a single, powerful motion. He backed out swiftly, without squealing his tires, and drove off without so much as a glance in the rear view mirror.