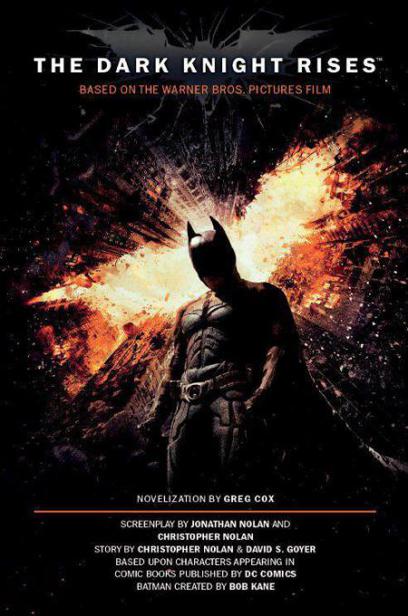 A NOVEL BY GREG COX

BASED ON THE SCREENPLAY BY JONATHAN NOLAN AND CHRISTOPHER NOLAN

BASED UPON CHARACTERS APPEARING IN COMIC BOOKS PUBLISHED BY DC COMICS

This is a work of fiction. Names, characters, places, and incidents are used fictitiously, and any resemblance to actual persons, living or dead, business establishments, events, or locales is entirely coincidental.

BATMAN and all related characters and elements are trademarks of and © DC Comics.

Printed and bound in the United States.

DID YOU ENJOY THIS BOOK?

We love to hear from our readers. Please email us at
[email protected]
or write to us at Reader Feedback at the above address.

“Harvey Dent was needed. He was everything Gotham’s been crying out for.”

Police Commissioner James Gordon stood before a podium in front of the courthouse where the late district attorney, supposedly martyred in the line of duty, had once fought for justice by prosecuting the city’s powerful underworld kingpins. Somber dignitaries, including the mayor and city council, were on hand to honor Dent’s memory. A black funeral wreath framed a large color portrait of a handsome man with wavy blond hair, a strong jaw, and a winning smile. Harvey Dent looked every bit a champion of justice, but Gordon had seen his other face. The commissioner hesitated briefly, before continuing.

“He was…a hero. Not the hero we deserved. The hero we needed. Nothing less than a knight, shining
brightly even in Gotham’s darkest hours. But I knew Harvey Dent. I was…his friend. And it will be a long time before someone inspires us the way he did.” Gordon gathered his notes, anxious to get this over with and exit the podium.

“I believed in Harvey Dent.”

The words caught in his throat. With any luck, people would think that he was simply overcome with emotion. God forbid they should guess what he was really feeling. That was a secret he shared with only one other man, a man who had sacrificed his own legend to preserve Dent’s legacy and reputation. A man whose face Gordon had never seen. Gotham’s true dark knight.

Is he watching this?
Gordon wondered, his eyes searching the crowd.
Where is he now?

And will Gotham ever see him again?

A land cruiser sped over a rugged mountain road, past rocky slopes devoid of human habitation. Scraggly patches of scrub and greenery dotted the barren gray hills. The cruiser had the road all to itself as it raced to make its rendezvous before the sun went down. It bounced over the rough terrain beneath a gloomy, overcast sky that was almost the same gray color as the hills. A keening wind whipped through the desolate peaks and canyons.

A bad omen,
Dr. Leonid Pavel thought. The middle-aged scientist sat tensely in the middle of the vehicle, flanked by grim-faced men armed with automatic weapons. More soldiers guarded the prisoners in the rear of the cruiser: three silent figures with hoods over
their heads. They sat rigidly, their hands cuffed, under the watchful gaze of the guards.

Pavel squirmed uncomfortably, feeling more like a prisoner than a passenger. He ran an anxious hand through a mop of unruly white hair. Sweat glued his shirt to his back.
Am I doing the right thing?
he fretted.
What if I’m making a terrible mistake?

Other sounds began to be heard. Just when he had convinced himself that he should never have accepted the Americans’ offer, the cruiser arrived at its destination—a remote airstrip overlooking a war-torn city. Artillery fire boomed in the distance, the reverberations echoing off the desolate hillsides. Sirens blared. The sounds of the conflict, which had been going on for months now, reminded Pavel why he had been so eager to flee the country for a safer, more civilized location. This was no place for a man of his intellect—not anymore.

The cruiser squealed to a stop, and the guards hustled him out of the vehicle. An unmarked turbojet airplane waited on the runway, along with a small reception committee consisting of a bland-looking man in a suit and a small escort of armed guards. Although the soldiers bore no identifying uniforms or insignia, Pavel assumed they were US Special Forces, probably from the CIA’s own secretive Special Activities Division. The elite paramilitary teams specialized in sabotage, assassination, counter-terrorism, reconnaissance…and extractions. Pavel hoped he could trust them to keep
him safe, especially after his recent narrow escape.