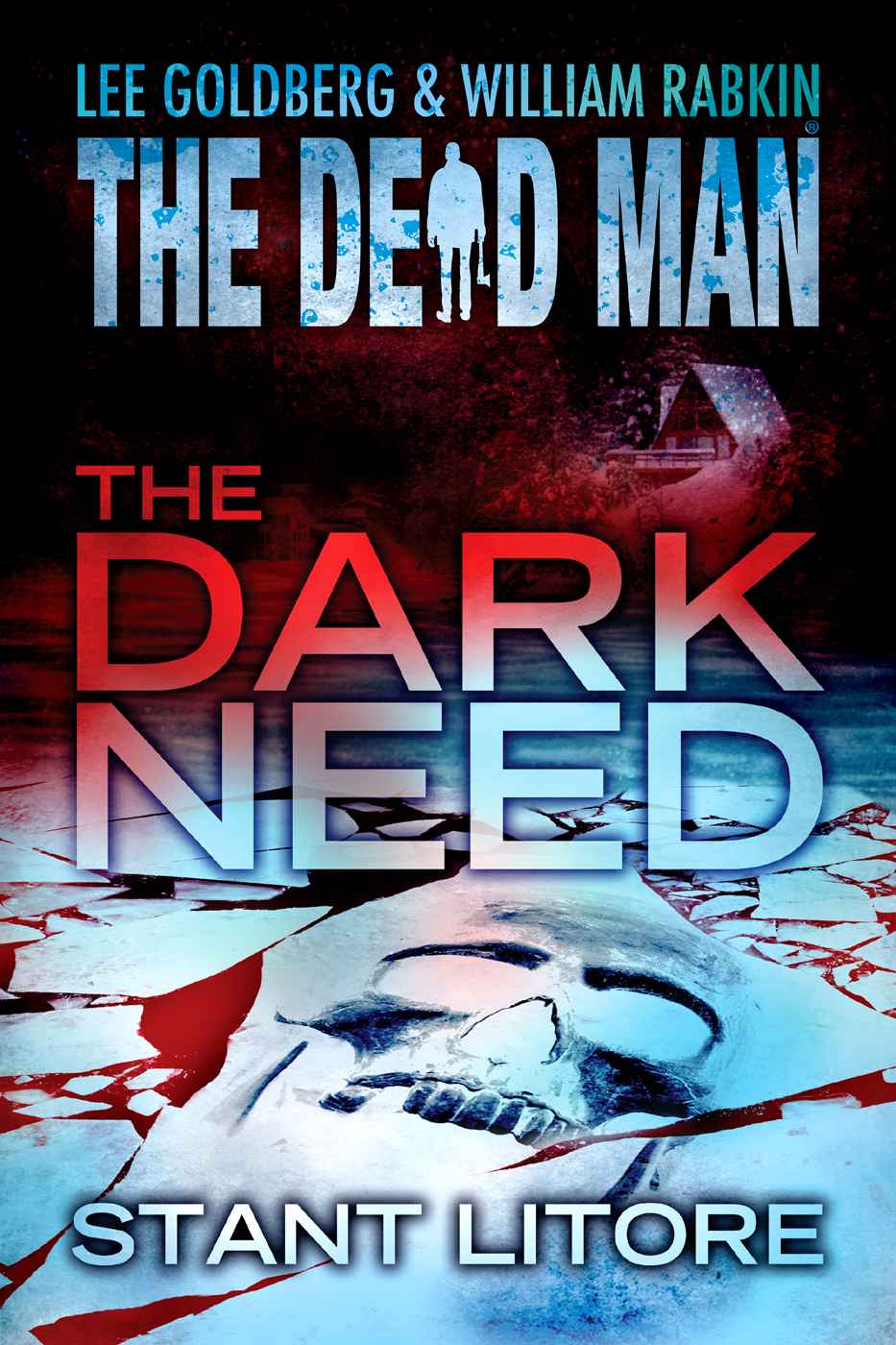 Text copyright © 2013 Stant Litore
THE DEAD MAN logo is a registered trademark of Adventures in Television, Inc.
All rights reserved.

For Jessica, heart of my heart

Matt could hear the footsteps ahead of him, the crunch of snow beneath dress shoes. Twice the man slid, caught himself, his curses on the cold air. Matt’s own booted feet were heavy, his footsteps loud—this hard snow made silence impossible. Both he and his quarry knew exactly where the other was. Speed mattered; secrecy didn’t. A stitch in his side as he barreled between the tall conifers, through a darkness lit only by the soft sheen of the snow, ducking when a sudden branch whipped at his face, shoving snow-covered ferns out of his way. He was already soaked to the skin, his heavy jacket doing little good. His breath loud in his ears. A few times he caught glimpses of the killer, darting between the cedars in a long duster he’d taken from his last victim. Once, just once, the killer glanced back. Enough for Matt to see his face writhing with maggots in the starlight.

Then they were out of the trees and the killer was running out onto the lake, which, for twenty yards out, was no dark mirror of forest and sky but a sheet of ice.

For once, why couldn’t it be easy? Most men left their jobs at five, had dinner at home, paid their bills, put their kids to bed, made love to their wives, fell asleep snoring ’til sunup. Not him. Never him. He had to be out chasing psychopaths with messed-up powers across dark ice four hours after midnight.

What kind of a life was that?

But then, technically I’m not alive, am I? And I’ve been dead in the cold before. I can do this.
Longing desperately for his ax, Matt took a breath and stepped out onto the ice.

The knocking snapped Oscar from sleep as sharply as you might break a twig. His was an old house, and sound echoed through it with a vigor and fury unknown to younger structures. Bolting upright, he sat in his bed, straining to hear over the clamor of his heart.

There it came again: an insistent but light and almost feminine tapping at the door. Oscar glanced at his bedroom window: the shadow of cedar branches faint through a sheen of frost. It had to be ten below outside.

It took a few moments to get his old body moving, into a bathrobe, and treading down the creak of his stairs, but whoever was at the door didn’t give up, didn’t like being left out in the cold. Four quick taps, repeated again and again. Oscar tied his robe, then blew air on his hands as he reached the last few steps. There was an old four-pane window by the door but it was entirely iced. He couldn’t see anything on his porch. The cold floor burned his feet; he hadn’t paused for slippers, and he groaned, wanting his bed and a swift return to the dream he’d been having, of a woman he’d yearned for in college. His sleep had been full of her body pressed softly to him, her gasps in his ear. A stab of regret: he should have asked her out. All those years ago. He should have asked her.

A rattle of the door, then he jerked it open, and then all the breath seemed to leave his body. His hand whitened about the edge of the door.

The woman on his porch smiled, but her eyes were hard and cold. Her graying hair, the small wrinkles about her mouth, the way one corner of her mouth curved higher than the other.

But she’d been… gone… for years.

“Have you forgotten me?”

He just stared at her helplessly. Then stammered, “Of course,” and stepped out of the way of the door.

She stepped inside, her eyes on his. He frowned. Something about her wasn’t quite right. The intent way she was staring at him, unblinking. That slight smile, an unnerving smile—the way one imagined predators smiling from the brush as they watched a deer step down to the creek, just one short leap away from capture.

She lifted her hand to his cheek, and at that soft touch his eyes filled with tears that he fought to hold back. Her eyes glistened too. “I know.”

His brain struggled to catch up with his heart. “Come sit down,” he whispered. “The… the kitchen. I’ll get you something to drink…”

“That would be nice.” Again that smile.

Coughing, he turned and shuffled toward the kitchen, his mind racing. Martha. His Martha. But she was in the grave. And had left his house before the grave ever took her. This
couldn’t be. Yet, ghost or dream, she was here. She was going to have a drink with him. Some things were too beautiful to be questioned. Some dreams you didn’t want to wake from.

Pain, violent in the back of his head. The world grayed and then was gone.

A hand slapping his face. Oscar’s eyes shot open. He found himself gazing up at a younger man, probably in his thirties. He had a military cut to his blond hair and a scar just above his left eye. Like a knife scar. A hard, chiseled face. In it, eyes keen as ice. The man lifted a needle and peered at it in the dim light from the lamp on the bedside table. Oscar gasped, tried to jerk upright. Metal cold against his wrists. More around his ankles. His breath went fast and shallow, his heart wild in his chest.

“Who are you?” His gaze locked on that needle.

The man smiled and fitted the needle to a long tube. A black bag—an old-school medical bag, the kind doctors used to carry on house calls—was popped open beside him on the bed. “I’m a doctor. Call me House.” His smile grew, and he lifted the needle near his eyes to look at it. “No, don’t call me House. Call me Lugosi. Doctor Lugosi. More appropriate, don’t you think?”

Without any change in that smile or in his eyes, he bent over Oscar and slid the needle quickly into his neck. The sharp prick of it.

“Now, stop that.” Another slap to his face. “Hyperoxygenated blood doesn’t taste nearly as nice. It’s memories I’m after, not oxygen. I can breathe whenever the hell I want. This…” He gave a soft shiver, a movement nearly sexual. His face flushed, eyes dark with anticipation. “This is a rarer feast.”

“Because you need it.” The man stared down at him, and Oscar realized suddenly what was so strange about his eyes: he rarely blinked.

“You need it,” the doctor said softly. “You’re not a religious man, are you, Oscar?”

“No, I didn’t think so. Not out here, alone. No priest. No wife even, no one to confess to. But you’ve done things, Oscar, regretted things, or you wouldn’t have seen me wearing a mask of the dead.” He ran the tube through a small hand pump and placed the other end of the tube into a small wooden bowl. “But I can help you, because I’m a doctor. A very special kind of doctor.”

The doctor ran his fingers along the tube where it lay across the bed, and Oscar tensed.

“You’ve probably done horrible things, or seen horrible things. Horrible things in your blood. Not to worry. I will take all the bad blood out.” Again that cold smile. The stranger reached into his bag, and Oscar’s gaze followed his hand, his throat dry. His captor pulled out a roll of black duct tape, and Oscar’s eyes widened. The harsh rip of the tape, then, even as he sucked in breath to scream, the stranger shoved the heel of his hand against Oscar’s chin, clacking his jaw shut, hurting him. Then the tape was warm and sticky against his lips, his cheeks, sealing his mouth shut. Almost gently, the stranger smoothed down the tape.

“Yes,” he crooned. “Empty you out. Leave you dried out and clean and pure. In the old days, I would have covered every inch of your body in leeches. Let them do it the slow way. They used to call us that. Medical people. They called us leeches. These aren’t the old days, though. No, they aren’t.”

He tapped Oscar’s cheek twice with his fingers, then reached for the little pump.

The duct tape muffled Oscar’s screams. Only the face-changer heard them, the face-changer and the mice that lived in the wall behind the old armoire that had belonged to Oscar’s wife. No one else. Outside Oscar’s house, the snow fell soft, silencing the whole world, erasing footprints, muffling all sounds, even the dreams of small lives living in burrows or inside of trees, and concealing all mankind’s secrets.

Over the past three days Matt had tracked the killer from Stanwood to Arlington, then up into the Cascades to tiny settlements that had no real road. He didn’t know the murderer’s name or his motive or whose house he would visit next, but Matt Cahill did know one thing.

The man had been touched by Mr. Dark.

It had been a long time since Matt had seen a face that terrible. It was as though even the man’s bones had been eaten away by the maggots beneath his skin. Matt had glimpsed him by chance in Anacortes, across a busy street, the day before the killings had started across the water in Stanwood.

Matt had found Stanwood buzzing with word of an elderly couple who lived with their niece in a trailer just off the county road. The two elderly ones had been drained empty, the blood sucked right out of their bodies. The niece had been nowhere to be found. In Arlington, it had been a youth pastor whose wife had been trying vigorously to divorce him after his arrest on charges of molesting children. The pastor had been out on bail for a week when a neighbor reported the pastor’s front door swinging open and shut in the wind. The cops found him in his bed, a puncture wound in his throat, his lips white and bloodless.

Here Today, Gone Tamale by Rebecca Adler
My Everything by Julia Barrett
A Rogue for All Seasons (Weston Family) by Lindsey, Sara
For Better or For Worse by Desirae Williams
Rocks in the Belly by Jon Bauer
Awakening (A Dangerous Man, #1) by Grey, Serena
Ghost Dog Secrets by Peg Kehret
When Love Is Enough by Laura Landon
One Hot Momma by Cara North
Women Aviators by Karen Bush Gibson