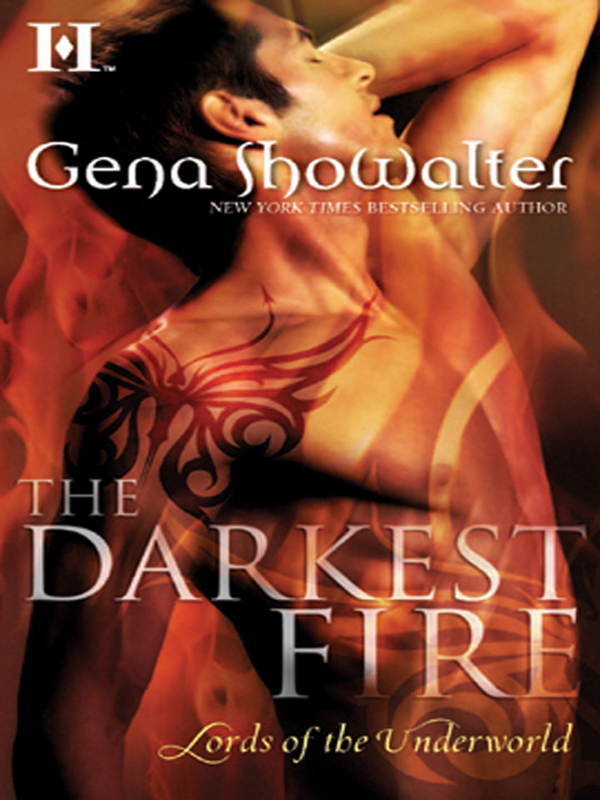 Every day for hundreds of years the goddess had visited hell and every day Geryon had watched her from his station, desire heating his blood more than the flames of damnation beyond his post ever had. He should not have studied her that first time and should have kept his gaze downcast all the times since. He was a slave to the demons, spawned by evil; she was a goddess, created in light.

And yet, still he watched her this day as she floated through the barren cavern, coral-tipped fingers tracing the jagged stones that separated underground from underworld. Golden ringlets flowed down her elegant back and framed a face so perfect, so lovely, Aphrodite herself could not compare. Eyes of starlight narrowed, a rosy color blooming in those cheeks of smooth alabaster.

“The wall is cracked,” she said, her voice like a song amid the hiss of nearby flame.

He shook his head, positive he had merely imagined the words. In all their centuries together, they had never spoken, never deviated from their routine. As the Guardian of Hell, he ensured the gate remained closed until a spirit needed to be cast inside. That way, no one and nothing escapedâand if they tried, he rendered punishment. As the goddess of Oppression, she fortified the physical barrier with only a touch. Silence was never breeched.

Uncertainty darkened her features. “Have you nothing to say?”

She stood in front of him a moment later, though he never saw her move. The scent of honeysuckle suddenly overshadowed the stink of sulfur and melting flesh, and he inhaled deeply, closing his eyes in ecstasy. Oh, that she would remain just as she wasâ¦

“Goddess.” He forced his lids to open gradually, slowly revealing the glow of her beauty. Up close, she was not as perfect as he had thought. She was better. A smattering of freckles dotted her sweetly sloped nose, and dimples appeared with the curve of her half-smile. Exquisite.

What did she think of
him
? he wondered.

She probably thought him a monster, hideous and misshapen. But if she did, she did not show it. Only curiosity rested in those starlight eyes. For the wall, he suspected, not for him. Even when he'd been human, women had wanted nothing to do with him. Sometimes he'd wondered if he'd been tainted at birth.

“Those cracks were not there yesterday,” she said. “What has caused such damage?”

“A horde of Demon Lords rise from the pit daily and fight to break out. They have grown tired of their confinement here and seek living humans to torment.”

“Have you their names?”

He nodded. “Violence, Death, Lies, Doubt, Misery. Shall I go on?”

“No,” she said softly. “I understand. The worst of the worst.”

“Yes. They bang and they claw from the other side, desperate to reach the mortal realm.”

“Well, stop them.” A command, laced with husky entreaty.

In that moment, he would have given up the last vestiges of his humanity to do as she wished. Anything to repay the daily gift of her presence. Anything to keep her just where she was, prolonging the sweetness of her scent. “I am forbidden to leave my post, just as I am forbidden to open the gates for any reason but allowing one of the damned inside. I'm afraid I cannot grant your request.”

A sigh slipped from her. “Do you always do as you're told?”

“Always.” Once he had fought the invisible ties that bound him. Once, but no longer. To fight was to invite pain and sufferingânot for him, but for others. Innocent humans who resembled his mother, his father and his brothers were brought here and tortured in front of him. The screamsâ¦oh, the screams. Had the pain and suffering been heaped upon
him
, he would not have cared. Would have laughed and fought all the harder. But Lucifer, brother to Hades and prince of the demons, knew exactly how to strike to ensure the desired results.

“I expected differently. You are a warrior, so strong and assured.”

“I will pay you to help me,” the goddess insisted. “Name your price. Whatever you desire shall be yours.”

Whatever you desire shall be yours
, she had said. If only, Geryon thought. He would ask for a single taste of her lips. But he would not risk the suffering of the innocentâ
why do you bother with them
?âsimply to sate his craving for the lovely goddess.

The question that had drifted through his mind had him gritting his teeth. He bothered because without good, there would only be evil. And he had seen too much evil.

Her delicate shoulders sagged in disappointment. “Butâ¦why? You want to keep the demons inside of hell just as much as I do.”

Geryon didn't want to tell her his reasons for refusing her, was still ashamed after all these centuries. Tell her, however, he would. Perhaps then she would return to the old ways and pretend he did not exist. As it was, his craving for her was growing, intensifying, his body hardening. Readying.
She's not for you
.

“I sold my soul,” he said. He had been one of the first humans to walk the earth. He'd been content with his lot and enraptured by his mate, even though she'd been chosen by his family and had not desired him in return. She had grown sick, and he had despaired. He had cried out to the gods for assistance, but they had ignored him. Then Lucifer had appeared before him.

To save her and finally win her heart, Geryon had willingly given himself to the dark princeâand found himself transformed from man to beast. Horns had sprouted atop his head, and his hands had become claws. Dark, carmine fur covered the skin on his legs, while hooves replaced his feet. In seconds, he'd transformed, more animal than human.

His wife had healed, as his contract with Lucifer stated, but she had not softened toward him. No, she had left him for another man. His hands fisted, claws digging deep into his palms, as he refocused on the goddess. “Though I wish otherwise, my actions are no longer mine to command.”

The goddess studied him, her head tilting to the side. He shifted uncomfortably, such scrutiny unnerving given his sickening appearance. To his surprise, revulsion did not darken her lovely gaze as she said, “I will see what I can do.”

“Lucifer, hear me well. I demand to speak with you. You
will
appear before me. This day, in this room. Alone. I will remain exactly as I am.” Kadence, goddess of Oppression, knew to state her wants precisely or the demon prince would “interpret” them however he wished. Were she simply to demand an audience, he might whisk her to his bed, her arms and legs tied, her clothing gone, a legion surrounding her.

Several minutes ticked by and there was no response to her summons. But then, she'd known there wouldn't be. He enjoyed making her wait. Made him feel powerful. She used the time to eye her surroundings. Rather than stone and mortar, the walls of Lucifer's palace were comprised of flames. Crackling, orange-gold. Deadly.

She hated everything about this place. Plumes of black smoke wafted from the blazes, curling around her like fingers of the damned. So badly she wanted to wave her hand in front of her nose, but she did not. She wouldn't show weaknessâeven with so small an action.

Did she dare, she knew she would find herself
drowning
in the noxious fumes. Lucifer loved nothing more than exploiting vulnerabilities.

Kadence had learned that lesson well. The first time she had visited, she'd come to inform both Hades and Lucifer that she had been appointed their warden. As one who embodied the essence of subjugation and conquest, there was no one better to ensure that demons and dead alike remained here. Or so the gods had thought, which was why they'd chosen her for this task.

She had not agreed, but refusing them would have invited punishment. Many times since accepting, however, she'd thought perhaps punishment would have been better. She spent her days sleeping in a nearby caveânot a true sleep but a watchful one, her mind's eye drifting over the different demon camps. She spent her nights surveying the wall. Every so often, she had to come to the palace and report an infraction.

How could I not have known what was happening this time
?

Had Lucifer blocked her visions? If so, what did he hope to gain?

No, that wasn't true. During her first visit, Lucifer had sensed her trepidationâand he'd since ceased every opportunity to nurture it. A fire-coated touch here, a wicked taunt there. She had wilted under his attentions.

That had disappointed the gods. They would have called her home, she was sure, had they not already bound her to the wall, an act that had been meant to help with her duties, not hinder them. But not even the gods had known just how deeply the bond would go. Rather than simply sensing when the wall needed fortification, she'd realized it was her reason for living. Her blood now sang with its essence.

The first time one of the demons had scratched it, she'd felt the sting and had gasped, shocked. Now, it no longer shocked her, though she still felt every contact. When a soul brushed it, her skin felt tickled. When the inferno licked at it, she felt burned.

You can do this
. The outcome of this meeting was more important than any that had come before it.
You can
.

Would the guardian care how much she risked for him?

From outside the palace she could hear the crazed laughter of the demons, the moans of the tortured and the sizzle of flesh pouring from bone. And the smellâ¦it was a hell all its own. It was difficult, remaining stoic amidst such vileness. Especially now. The past few weeks, her body had been draining of strength, little by little, pains shooting through her. Now, at least, she knew why. Bound as she was to this dark underworld, that crack in the outer wall was literally killing her.

The pound of footsteps suddenly echoed and the flames several feet in front of her parted. Finally. In strolled Lucifer, as carefree as a summer day.

“I've been waiting for your return,” he said in the silkiest of voices. He even grinned, the expression pure wickedness. “What can I do for you, my darling?”

Love Anthony by Lisa Genova
Scarred Asphalt by Blue Remy
Chicken Soup for the Kid’s Soul by Jack Canfield
Saving Grace (Serve and Protect Series) by Wilson, Norah
The Great Sicilian Cat Rescue by Jennifer Pulling
Color of Love by Sandra Kitt
Plus None 2 by Emily Hemmer
How a Gunman Says Goodbye by Malcolm Mackay
Strapped Down by Nina G. Jones
The Amazing Tales of Wildcat Arrows by Joy, Dara