The Death Run (A Short Story) 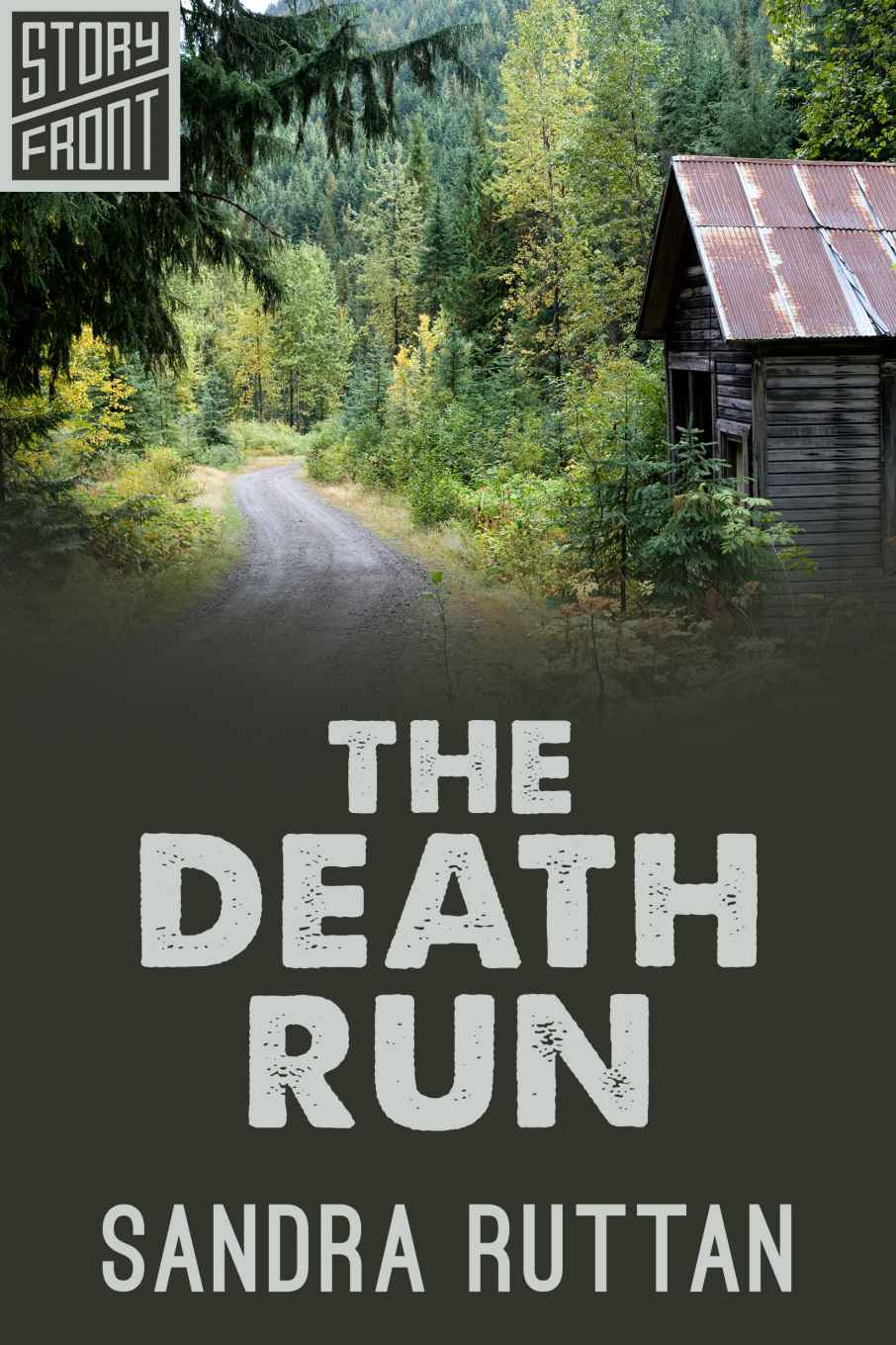 “SUSPICIOUS CIRCUMSTANCES has to be one of the most satisfying mysteries going that grips the reader from beginning to end. Ruttan has spellbinding style.”

“Brave, dark and utterly convincing, THE FRAILTY OF FLESH is guaranteed to break the hardest of hearts.”

OTHER TITLES BY SANDRA RUTTAN

The characters and events portrayed in this work are fictitious. Any similarity to real persons, living or dead, is coincidental and not intended by the author.

No part of this work may be reproduced, or stored in a retrieval system, or transmitted in any form or by any means, electronic, mechanical, photocopying, recording, or otherwise, without express written permission of the publisher.

For everyone who has ever been the victim of a bully.

The day after the accident, a lone figure went to the place near the edge of the woods and gravel pit. The wind blew his straggly, long hair into his face, making it harder to find the right spot.

When he found it, he glanced around, double-checking that nobody had put things together and followed him there.

He dug up the can and cracked the lid.

It was gone. It was all gone.
Only an old watch was inside. He dropped the tin in a panic. Were they on to him?

He should run. Run until his body was earning the frantic breaths that were already coming hard and fast.

As he turned, he saw it. A small slip of paper was inside the lid. He bent down and peeled off the tape that held it in place.

The Four-Oh is permanently canceled. Get out of town. Don’t come back or you’ll be next.

Below, there was a list. A column of five numbered lines. Each number had one initial beside it.

This time, he dropped the can and ran.

He wasn’t taking any chances; he left town that afternoon.

“So, like I was sayin’ we jest keep on with the Four-Oh run. Jay’s cool with it.” Judd grinned. He glanced at the counter and the grin faded. “Place half-empty and there’s no time to make a fresh pot? Geez.”

Colin watched Judd saunter back to his booth, where he’d been talking loudly to his friends.

Loud enough that Colin could hear. Wasn’t hard, though. Stuck in a small town, still invisible. He was surprised Judd even knew his name.

Colin slid off the bar stool where he’d been sitting, a few feet from Judd’s table, and walked down to the cash register.

The petite blonde turned and offered him a smile as she grabbed donuts and stacked them inside a box.

“Can I get four coffees?” He glanced back at Judd’s table as he tucked his newspaper under his arm. “Uh, fresh?”

Her voice sounded like honey to him. Not that he knew what honey sounded like, but it was how he imagined it would. Her eyes seemed to shine with hope, like she hadn’t given in to the disillusionment of being a high-school dropout, working as a waitress in a small-time coffee shop, making pots of coffee and boxing donuts all day long.

Eileen passed the coffees over to him and gave him another smile. “Thanks for hooking me up with your brother. He’s nice.”

Colin forced himself to smile back, although he didn’t have to push himself too hard. He’d known about her reputation. They lived in a small town, after all. He would’ve overlooked that for himself.

But she’d turned him down.

Things were different since then, but she was still important to him. Perhaps more important than ever.

He paid her and tried to ignore the way just the touch of her fingers sent goose bumps up his arms and a feeling of warmth to his face as he took the coffees over to the table.

Colin nodded at Graeme and Terry.

“How’s Corey doin’? Still in the city?” Graeme took a gulp without even bothering to look in Colin’s direction, or say thanks. Graeme had always been ruthless; Colin had endured his taunting at school, and knew the backsides of those fists well.

For the life of him, he couldn’t remember a single reason why Graeme had used him as a punching bag, but then Corey had put a stop to that.

“Really? Our very own league man. He stayin’ this side of the border?”

Colin shrugged. He stood at the end of the booth, although there was an empty seat at the table. The old black coat he wore hung loosely on him, but the guys at the table had fresh new blue jean jackets and boots.

A noticeable step up from the faded army fatigues they used to wear.

“Guess not. Hope to hell it’s not Pittsburg, though. Can’t stand ’em.”

Judd gave Colin a little glare, and he knew it was time to walk away. Colin wandered back into his world of oblivion.

The sound of the bells on the door ringing out and the latch clacking shut behind him blurred into the dead-quiet street waiting for him outside. Colin pulled out his bank card as he walked to the ATM, which soon told him he had insufficient funds to withdraw.

He tossed the newspaper into the recycling bin. He didn’t need it anymore.

He’d known for a while it would take more than classified ads to get him out of this town.

There’d been one chance for him to get out and get an education. Three days shy of graduating, the government dropped the hammer. Cuts everywhere. No chance to get hired on in a field that was facing layoffs. No choice but to come home and wish he were anywhere else.

He’d tried to run, but this curse had reached out and snared him, and dragged him back.

At least, that’s how it happened in his dreams. No, not dreams.

Bloody town, full of hillbillies, wannabes, and has-beens. And they thought he was a loser because he’d left and been forced back. Because he couldn’t even cut it there. Been cut back to a casual hire at the Co-op, of all places.

Colin straightened up a little as he stuck his hands in his pockets. He’d known for a while he’d have to create his own fate if he were going to escape.

He started the long walk to the cemetery.

“Colin? Is that you? Colin? Are you deaf?” With that, Mother started marching toward the hallway, hands on her hips.

Colin could see her in the mirror, which was curiously placed in a corner, and let someone at the doorway see into the far hall, or someone in the hall by the bedrooms see to the doorway.

Couldn’t complain. He always had fair warning when she was coming.

As he pulled his boots off, Colin looked up. “Who else would it be?”

“Really. Get those boots back outside. They’re covered in mud. What have you been doing, wandering around in the rain?” She wagged a finger at him. “Have you found a job?”

He ran his hands through his soggy hair and sighed. “Not yet, Mom. I went to the cemetery. It wasn’t raining when I left.”

She stopped cold as he walked past her, into the living room.

She stared at him for a minute, but didn’t say more. There was a sterile dinginess to his mother, and the house she kept. It was like all the color was slowly being sucked out of everything. Faded paint, faded wallpaper.

Like the décor around her, Mother had faded with time. Her once blonde hair was turning gray, and her rosy cheeks were a memory, replaced now by a shade that wouldn’t even match pale salmon.

She stared at him, and for a second he thought she was going to try to say something, but then she walked back to the kitchen. “Wash up and come to the table.”

He did as he was told.

Bright beams of sunlight pushed their way into his black sleep and he groaned. 7:30. That’s what the clock said. Colin jumped with a start. He never slept that late. Some nights, when his dreams were bad, he barely slept at all.

It hadn’t been that way in the city, when he’d been at college.

“What’s wrong with me? Sleeping in, today of all days?” He stopped. He’d been up late, using the table after Mother went to bed. He’d be up late tonight. After all, today was the big day.

Maybe sleeping in wasn’t such a bad thing after all.

He pulled on sweatpants and a T-shirt, swore under his breath as he banged his head on the low frame of the door, and then wandered down the hall.

There were noises from the kitchen. Running water. Clunking dishes.

“Weren’t you supposed to make breakfast today?” Mother liked to remind him of his shortcomings by asking pointless questions with obvious answers.

“Sorry.” He gave her a sheepish half smile. “Can’t believe I slept so late.”

“Neither can I,” she muttered as she took the plates and cutlery to the table in the dining room.

A few second later, she turned around and looked him in the eye. “What’s this?”

The leather-bound scrapbook was in her hand. Colin was sure she could hear his heart beating a million times a minute.

“It’s … it’s nothing.” The burning he felt in his face told a different story.

“Nothing? You’ve been up half the night, left garbage all over my table, for nothing? I swear, you’re a mystery to me. I don’t know what you’re thinking half of the—” She stopped cold as she opened the book at random. Her breath caught in her throat, and the room was absolutely still, except for the sizzle of the bacon on the stove.

Colin hadn’t even realized she was cooking bacon until then.

She flipped the pages slowly. “I didn’t even know you were working on this.”

He shrugged and turned his face toward the floor. “It’s not the kind of thing you talk about, you know?”

“It’s such a nice …” She seemed to struggle for an appropriate word. “Collection. Maybe you could share it with Mrs. Stephensen. I’m sure she’d be really touched. I didn’t even know you saved all these clippings about Danny.”

She reached the last few blank pages at the end and closed the book, then passed it to him.

The spell was broken, the book back in his hands. She continued with breakfast, turned the stove off, put bacon and eggs on a serving plate. Colin quickly set the book on the side table before he met his mother in the dining room.

“I’ll just clean this up,” he said as he pointed at the scraps of paper left on the table.

“It can wait. Eat your breakfast.”

With that, Colin sat down. He ran through his plans for the rest of the day in his head as he ate in silence.

Vaughn Falls wasn’t a very big town. One long road stretched lazily from end to end, so it was easy to see most of the local shops without hitting the side streets. What made it a long walk wasn’t the distance, but the way everyone wanted to talk your ear off.

Colin thought it was funny how people in big cities had nothing to say to each other. They’d pass person after person on their way to work, see all kinds of things, ride in silence. Come to a small town where nothing’s happening, everybody knows everyone, and you can’t shut people up. Talk to you all day if you let them.

He’d always gotten away with being a little quieter, but today he stopped to help Mrs. Griffin with her groceries, listened to Walt Anders outside his shop for nearly half an hour before a customer came, and then took a walk through the Co-op.

By the time he was done, he glanced at his watch, and knew it was time.

He headed to the restaurant.