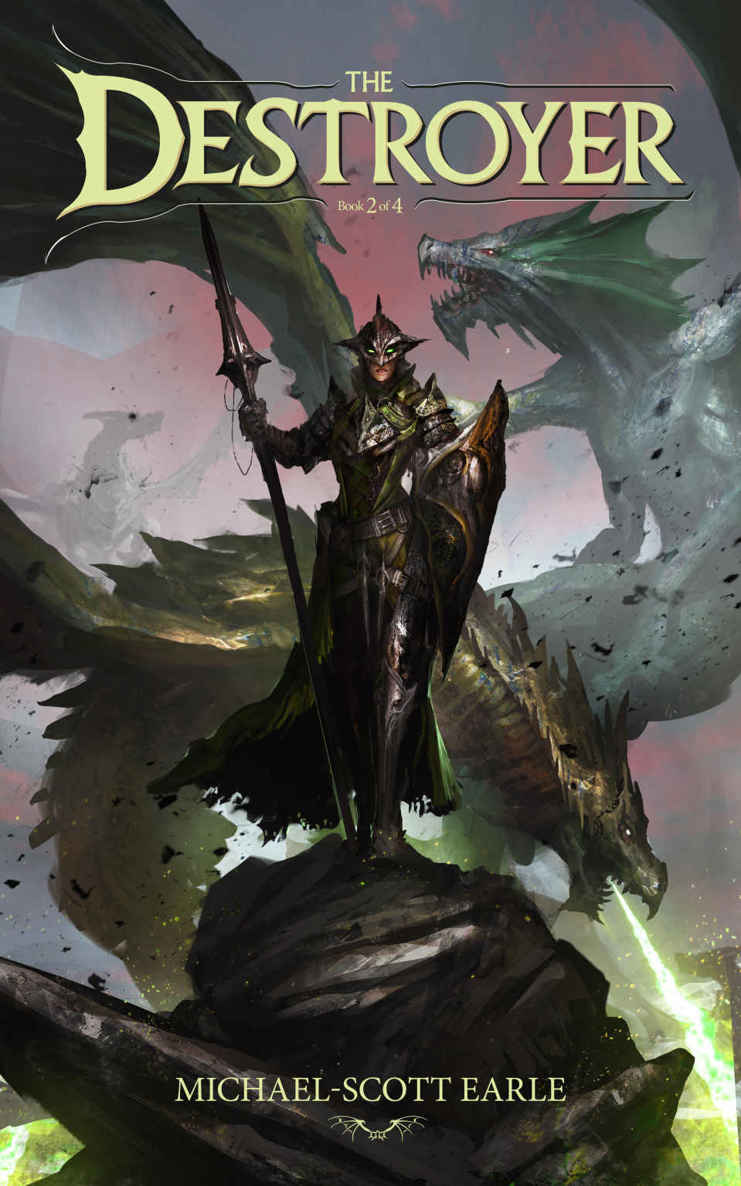 Word must have spread through the troops by now. It had been almost fifteen years since I led a charge. It was not that I feared battle, I relished every possible chance to crush Elven forces. It was more that my generals insisted that I stay in the back, out of danger, and able to coordinate their movements.

There was little choice today. I needed to lead them or we would lose the whole war and the small scraps of freedom we had carved for our race. I’d made a horrible mistake with our positioning and we were pinched between the Elven forces and the ocean. I should have predicted that they would flood the wetlands to the north to block our escape. It was definitely something I would have done had I been in their same position. I had gotten so used to winning that I started to underestimate my Elven opponents. Entas would have been upset with me if he had still been alive.

We won our last series of major battles against the Elven horde by harassing their food chain. This was a new force of Elvens with a different commander who I would not disrespect again. This new general reacted to my tactics quickly and actually surprised us with a few feints and victories.

I finished my pre-battle meditation in my tent before I checked my armor and weapons again. The armor fit like a second skin and I could no longer tell that it weighed almost seventy-five pounds. The skulls that protruded from my pauldrons continued to scream in unbridled rage along with the various smaller effigies etched across the blackened metal. When I attached the helm to my body, I no longer looked like a man, I looked like a smoldering, skinless demon that had just escaped from the fiery nightmares of hell. It was an absolute contrast to my enemies, who dressed in armor of beautifully leaved gold and silver. Their armor was engraved with trees, birds, celestial shapes, and flowers to enhance their already beautiful forms.

I’d rather be the walking incarnation of death than one of flowers. My purpose was destruction and not life.

My purpose was victory.

My purpose was revenge.

My shield and war mace were fashioned after my armor, by the same talented smith who forged all of my generals’ armaments. The arms were stout, impossibly heavy, and covered in screaming, agonizing, horrible visions of death. My hands wrapped around their comfortable leather grips and the small pangs of regret, remorse, and worry faded from my mind. The situation looked grim, but I would triumph. I was always victorious.

My massive black warhorse stood outside my tent in its dark skull plate armor. The horse was a magnificent beast, bred from carefully selected stock, and it was the eighth of its lineage that I had ridden. Its midnight coat shone in the morning sunlight and the light displayed its network of large muscles and veins. The beast snorted angrily when it noticed me. It was eager to kill, and the noise the animal made indicated that I had taken too long in my tent getting ready.

One of my men attached the long red cloak to my armor as I approached the horse. Another one held a twelve-foot skull encrusted lance. I could tell that he had been changed since he was able to hand it up to me easily once I mounted my horse. The two humans who assisted me checked my saddle and the hooks that held my mace and shield. My horse paced in annoyance. I sensed the animal's desire to run, smash, and trample.

“Looks good Kaiyer,” the one who handed me my lance said. I recalled that his name was Rogiur.

I spun the warhorse around and trotted to the front of the camp, to where Gorbanni’s men posted. They were my mounted cavalry and would lead the vanguard strike against the bulk of the massive Elven force. A few of Malek’s men would be riding with us to help keep magical attacks out of our path. We were positioned in the bowl of the valley against the flooded wetlands and the ocean. We would have to charge uphill to meet the enemy. It was a horrible position and I cursed my hubris again for putting the army in this predicament.

Gorbanni met me on the field in front of his gathered cavalry. His armor was polished to a gleaming shine and it almost seemed like the metal ram horns on top of his helm were glowing in the morning light. Two of his commanders sat on their horses next to him and the three saluted as I approached.

“Are you ready?” The monstrous helmet made my voice drop three octaves in pitch and grow darker in timbre.

“We are. As soon as the flags from the other generals go up, we will charge.” I had known him long enough to know that he was nervous.

“Good. I am eager to ride with your men and trample hundreds of Elven bodies under the hooves of my steed,” I said flatly. Gorbanni’s commanders were seasoned men, but I could see their eyes grow wide at my obvious confidence.

“Kaiyer,” Gorbanni said hesitantly in a way that made me think he would say things I might disagree with. “This looks very grim. I would be telling a falsehood if I said that my men held the highest of spirits. It helps tremendously that you are riding with us, but would you be willing to speak to them?”

“Of course! You know I would do this my friend.” I laughed under my helmet but it must have sounded hollow. Even so, the blonde general and his two commanders looked relieved.

The three of us pushed the horses farther down his line. To my left I could see up the slope away from the ocean, where the gathered Elven army was stationed. The rising sun reflected off their armor and made it appear as if it rose from two different places. It was hard to get a count of their exact number from our position, but their line stretched on for what seemed like a mile in each direction. After a quarter of a minute of riding, I reached the middle of Gorbanni’s unit. Their horses were impressively armored with plates, ram horns, and decorated lances of thick gray steel. Most of them wore their helms down so I was unable to see the expressions of their faces. As I rode by with my long red skull cloak and death lance in the air, they sat up in their saddles with a salute.

I spun my steed around when I reached the center and regarded them from my position at the head of the unit. I controlled the Air passing through my lungs and used its power to throw my voice across their lines and to the remainder of the forty thousand warriors. Malek and Shlara’s troops were positioned behind Gorbanni’s cavalry, too far away to hear my normal voice.

“The O’Baarni,” I started with the simple phrase to get everyone's attention. Gorbanni’s troops were already focused on me, but silence descended on the rest of the masses that prepared for the upcoming battle.

“Upon the dead bodies of our fathers, mothers, sisters, brothers, and loved ones, we have given birth to this army.” I paused briefly and my horse strafed sideways, twisting his head and snorting. It didn’t understand why I wasn’t killing Elvens yet.

“We have fed this army on the blood, flesh, and screams of our enemies. This diet has helped us grow strong and savage. In our past lives we were slaves and we lived in fear of all the possible ways they could punish us. Now we are free men, free women, and we dream of what abuse we can inflict on them. What retribution we can inflict on them. What horrors we can inflict on them.” My horse skittered the other way and tried to run up the slope but I yanked on its reigns and dug my spurs into its flanks hard enough to draw blood. It snorted again in anger but I doubted it actually felt the spurs. It was an effigy of my anger and hate. During this day the animal would understand me better than anyone else on the battlefield might.

“Some of you think this is our darkest day. Some of you are afraid. Some of you wonder how we will live through this.” The horse quieted suddenly and shook its mane in frustration.

“So do not be afraid that this is our darkest day. We are all going to die eventually. But we will not die this morning. I am leading our first charge against our enslavers. I will be the first one they see and the first one to hit their ranks like a thunderbolt through a tree. Do not fear this day. I know we will live through this battle, we will flourish through this existence, and we will be born again when night falls, stronger than we have ever been.”

I paused again and moved my horse slightly toward Gorbanni’s standard bearer.

“I only have one fear today. I fear that, like my stomach on a feasting day, I will not be able to consume all the blood, all the flesh, and all the screams that this large bounty presents for me. I will need help devouring them.” I sucked in my breath and channeled the Wind through me. I would be so loud now that the Elvens would hear my voice echo in their skulls.

“Will you help me feast O'Baarni?” I screamed.

They screamed back a thousand times louder. Malek always teased that I didn't appreciate any art. Yet this was the finest music I had ever heard.

I raised my arm and my banners tilted to the sky on all four corners of the army, bearing a black skull framed in blood red. I lowered my arm toward Gorbanni’s bearer. He didn’t waste a second before he raised his up in the air. Within a few more seconds Shlara’s dragon and Malek's wolf standards lifted up against the sky. Thayer and Alexia's armies were a two week ride away, where I had incorrectly guessed the Elvens would be ripe for harassment.

I spun my horse around to face the Elven legion. My horse stamped his foot and tossed his head again. If he could have thrown me off the saddle and charged up there himself, he would have. Gorbanni rode to my side with his visor raised.

“Thank me when our armor is soaked with their blood my friend,” I said as I raised my lance up in the air. He nodded and lowered his helmet, then he made a signal with his hands and his guard closed in around us. My horns sounded from the standard bearers and across the bowl of land where the army lay. They were a triumphant call to the heavens and to the hells.

My warhorse sprung forward faster than any steed on the battlefield and chewed up the soft grass as it raced up the hill toward the wall of golden and silver armor. I didn’t bother to look for Gorbanni or his men; they were probably at least ten or twenty feet behind me. I hoped they would catch up before I hit their front lines so they wouldn’t feel useless.

How to Save the World by Lexie Dunne
Star Trek: That Which Divides by Dayton Ward
Truth Like the Sun by Jim Lynch
Widowmaker by Paul Doiron
The Gift by Peter Dickinson
Around India in 80 Trains by Rajesh, Monisha
Darkside Blues: SciFi Alien Romance (Dark Planet Warriors Book 4.5) by Anna Carven
One Night Burns (The Vampires of Livix, #1) by Smith, J Gordon
The Golden Maze by Hilary Wilde
Girl Waits with Gun by Amy Stewart