Read The Devil in Green Online

The Devil in Green 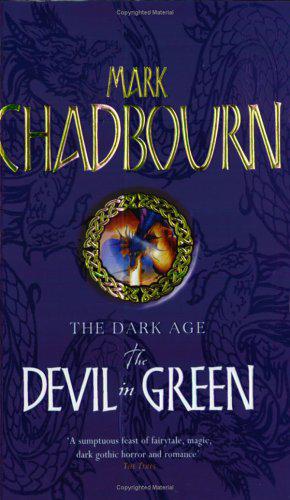 The right of Mark Chadbourn to be identified as the
author of this work has been asserted by him in accordance
with the Copyright, Designs and Patents Act 1988.

First published in Great Britain in 2002 by
Gollancz

For more information on the author and his work, please visit
www. markchadboum. net

Allan Beacham, Labhras de Faoite, Alanna Morrigan, Faith Peters
and the other regular visitors to the Mark Chadbourn message
board, and all the many people who've e-mailed me or written to
me during the course of the Age of Misrule; Greta for discussions
about balance and the Craft; Howard's House Hotel, Salisbury; and
finally to the staff of Salisbury Cathedral, who answered all my
impertinent questions with good grace.

Chronicles of the Fallen World

One night, the world we knew slipped quietly away. Humanity awoke to
find itself in a place mysteriously changed. Fabulous Beasts soared over
the cities, their fiery breath reddening the clouds. Supernatural creatures
stalked the countryside - imps and shape-shifters, blood-sucking revenants, men who became wolves, or wolves who became men, strange
beasts whose roars filled the night with ice; and more, too many to
comprehend. Magic was alive and in everything.

No one had any idea why it happened - by order of some Higher Power,
or a random, meaningless result of the shifting seasons of Existence - but
the shock was too great for society. All faith was lost in the things people
had counted on to keep them safe
-
the politicians, the law, the old
religions. None of it mattered in a world where things beyond reason could
sweep out of the night to destroy lives in the blink of an eye.

Above all were the gods - miraculous beings emerging from hazy race
memories and the depths of ancient mythologies, so far beyond us that we
were reduced to the level of beasts, frightened and powerless. They had
been here before, long, long ago, responsible for our wildest dreams and
darkest nightmares, but now they were back they were determined to stay
for ever. In the days after their arrival, as the world became a land of myth,
these gods battled for supremacy in a terrible conflict that shattered
civilisation. Death and destruction lay everywhere.

Blinking and cowed, the survivors emerged from the chaos of this Age
of Misrule into a world substantially changed, the familiar patterns of life
gone: communications devastated, anarchy ranging across the land,
society thrown into a new Dark Age where superstition held sway.
Existence itself had been transformed: magic and technology now worked
side by side. There were new rules to observe, new boundaries to obey,
and mankind was no longer at the top of the evolutionary tree.

A time of wonder and terror, miracles and torment, in which man's
survival was no longer guaranteed.

chapter one
in these times

'It is not bad luck, but right and just that you have found yourselves travelling
this road, far from the beaten track followed by others. It is right that you
should learn all things and develop the unshakeable heart of well-rounded
truth, unlike the opinions of men that contain no truth at all. You shall learn
how mere appearances seem as though they actually exist.' -
Parmenides

The weight of a man's soul is greatest in the dark hours before dawn. On a
night when even the moon and stars were obscured, Mallory carried the
burden of his own intangible more heavily than ever. He was in the thrall
of an image, a burst of fire in the night like the purifying flame of some
Fabulous Beast. It was clear when he closed his eyes, floating ghostly
across his consciousness when he opened them, both mysterious and
haunting. Yet a deeply buried part of him knew exactly what it meant, and
that same part would never allow it to be examined.

He had briefly been distracted by the passage of a man in his mid-
twenties who looked unusually frail, as if gripped by some wasting illness.
He was hunched over the neck of his horse, buffeted by a harsh wind
hurling the first cold stones of rain. Autumn was drawing in. Mallory was
protected from the elements in his Porsche, which he had reversed behind
a hedgerow so that it couldn't be seen from the road; he'd felt the need to
clear his head before continuing on to his destination.