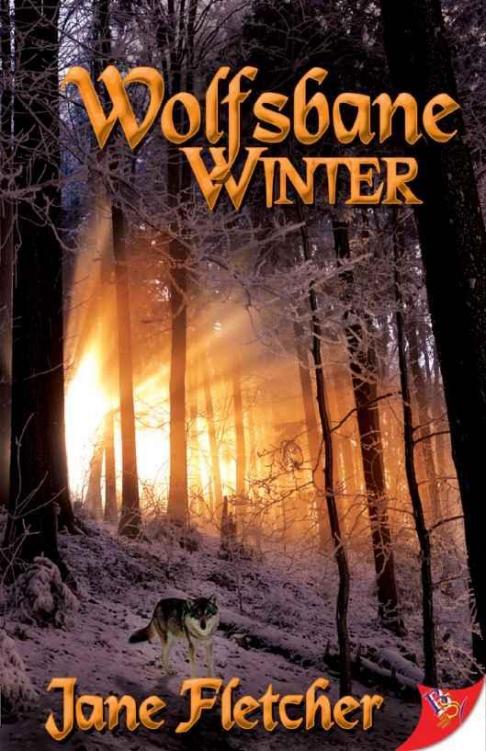 The Iron Wolf mercenaries who guard travelers on the Misery Trail are notorious for their quick and casual sex lives.

Deryn may fit the stereotype better than most, but she has her reasons. A childhood tragedy has left her wary of forming attachments. If you don't care, then you can't get hurt, but you can still make a mess of things—such as the error of judgment that leaves her with no money, forced to spend the winter on a lousy job in a miserable little backwater.

There she meets Alana, local healer, vet, and woman of mystery. It does not take Deryn long to find out that Alana is more than she seems, and has her own perilous secret to keep. Yet Deryn still finds herself falling for the woman, so much so that her come-and-go lifestyle is at risk.

This would be bad enough, but serious trouble arrives for Deryn and Alana in the form of demon magic from the Time of Chaos—revealing that old legends are not merely material for ghost stories around the fire. As the danger increases, who do they need to fear more, the living or the dead?

The Exile and the Sorceror

The Traitor and the Chalice

The Empress and the Acolyte

The High Priest and the Idol

The Temple at Landfall

Shadow of the Knife 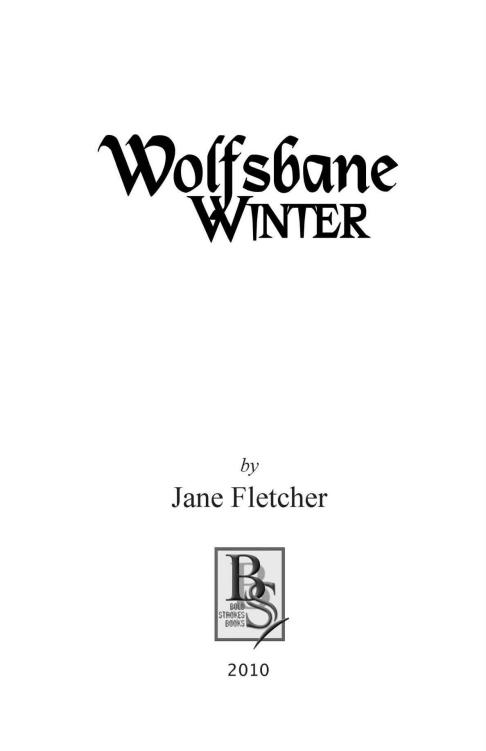 To Joanie, Ruth, and Jo for reading the first draft and making helpful suggestions.

To Sheri for the cover.

To Stacia, Cindy, and everyone else at Bold Strokes for being so wonderful to work with.

To Rad for making it all possible.

Deryn pulled back the bowstring and locked her hand under her chin. She squinted, lining up the bow with the target, and then carefully relaxed her fingers, letting the string roll off the archer’s tab. Her arrow thudded into the tree, a bare inch from the center of the chalked cross she had been aiming at. Smiling in satisfaction, she reached over her shoulder for her quiver.

Without warning, a fury of hoofbeats erupted, charging toward her. She barely had time to react before the rider thundered past, crossing so close behind that the horse’s tail flicked her arm. A bowstring twanged and a second arrow struck the tree, this one a hand’s width from the cross.

Deryn’s heart pounded, in part due to the jolt of surprise and in part due to the sight of Shea, moving as if she and the horse were one, a single fluid entity. At the edge of the clearing, Shea turned in an impossibly tight circle for someone controlling her horse purely by pressure from her knees, and galloped back. Already she had another arrow on the string, ready for her second shot. This one went wider of the mark, clipping the edge of the tree. Shea wheeled around again, her horse slowing.

A chorus of good-natured catcalls came from the group of Iron Wolf mercenaries who were eating lunch at the other side of the campsite. Shea responded with a laugh and an obscene gesture as she jumped down from her horse before it had stopped completely.

Shea gave the tree a long, critical stare and then grinned at Deryn. “Okay. Your arrow was nearer, but you were standing still. Do you want to try on horseback and see if you can beat me?”

“Ah, no. I know I um…couldn’t, it’s…” Deryn stopped trying to talk and settled for a smile that she hoped was not too sickly.

Shea gave a loud laugh. “It’s all right. You did pretty well, for a scout.”

“Nobody is gonna expect anything much in the way of fighting from you. That’s the job of us warriors.”

Deryn could not believe how lame she was sounding. Not a single intelligent thought was in her head. Her palms started sweating. She tried to wipe them surreptitiously on the legs of her pants, while praying her body would not betray her in even worse ways, such as by blushing. Shea had joined the band of mercenaries at the mine six days before, and this was the first time they had exchanged more than a one-word greeting, although Deryn had dreamed about it.

Shea patted Deryn’s shoulder and then strolled to the tree. “Scouts are there just so you know where you’re going, but I tell you, the scout in my last party was a fucking useless waste of space.”

Deryn’s stomach had catapulted through a loop at the pat and her knees were unsteady. Yet somehow, she managed to follow Shea, who carried on talking.

“D’you know, the jerk led us right into the middle of a windigo nest. First thing we knew about it, I was staring at teeth the size of my fingers”—Shea held up her left hand to illustrate, then raised the other one, leaving a scant yard between her palms—“this far from my face. I tell you, I was…” She shook her head ruefully and dropped her voice to a confidential whisper, even though nobody else was near enough to hear. “I was shitting myself.”

Deryn wished she could make a casual, offhand quip, as one Iron Wolf to another, expressing solidarity for the hazards of their profession, but she had never seen a live windigo, let alone fought one. She reached the tree and pulled her arrow out, which gave her a few more seconds to think, but the best she could come up with was, “That must have been…um…nasty.”

“It sure was. Luckily, Hagan and Raul were sharp about it. They got the beast’s attention long enough for me to get out of biting range. Then the three of us polished it off.”

“Good you had comrades on hand you could rely on.” At last she had managed to string a proper sentence together.

“Too true. It’s more than I can say for that damned scout. Useless fool. I mean, the windigo was twenty feet long, we’d marched bang into the heart of its territory, and the idiot claimed he hadn’t seen any sign of it. What was the point of having him on the team?”

“Was that when you got injured? I heard you’d been hurt riding the Trail, so you couldn’t complete the journey. Someone mentioned it to me, kind of in passing.” Deryn did not want to give the idea that she had been actively hunting down gossip about the new arrival, even though it would be true.

“No. That was a completely separate cock-up on his part. The jerk picked a dumb-ass place to ford a river and my knee got wrenched.”

“Yeah. I couldn’t ride for a couple of weeks, and the traders couldn’t hang around if they were to get to Sluey and back before winter. Luckily we were near a fortified way-house, where they could leave me. When I was fit to ride, I tagged on with a group heading back to Oakan. But I’d only gotten paid for the part of the journey I’d done. That’s why I needed to fill in for a month with this job here.” Shea glanced around dismissively. “It’s not what I’d have chosen. Way too dull. But you’ve been here some time, right?”

“Yes. Brise and me came with the miners, when they started, in spring.”

“The miners wanted protection. We’ve had a few hungry bears and a cougar sniffing round.”

Shea threw back her head and laughed. “Yeah, bears. That’s about what I’d expect. Hardly needs Iron Wolves to handle it. But what I meant was, why did Brise accept a piddly, god-awful job like this? She doesn’t strike me as a total waster. She’s not scared to tackle the Misery Trail, is she?”

Even though Shea was the one saying it, and she had been smiling while she spoke, Deryn felt a kick of irritation. She glanced across to where Brise stood with a couple of miners, one foot on the log they were using as a seat, chatting to them while they finished lunch. A casual pose. Yet always Brise had the air of a cat about her, senses alert to everything and a lithe muscled body, ready to react in an instant.

“Brise is a really good scout, and she’s ridden the Trail, loads of times.”

Deryn’s tone must have registered. Shea held up her hands. “Hey, I didn’t mean no disrespect. She’s your mother, right? And like I said, she strikes me as being way more useful than most scouts you meet on the Trail. That’s why I’m surprised she’d spend a whole season here, playing nursemaid to miners. If she used to ride the Trail, what made her stop?”

“She adopted me, a few years ago. She reckoned I was too young for the Trail then, so we’ve been…” Deryn shrugged rather than finish the sentence, hoping the admission would not make her seem too much like a child in Shea’s eyes.

“Is she gonna do the Trail again?”

“She said she would, once I’m old enough. Just another year or two and I can join the Iron Wolves.”

“Of course.” Deryn raised her eyes and met Shea’s level gaze. A whole second passed before Shea looked away. Deryn swallowed and her stomach formed a tight knot. How much eye contact counted as significant?

“I’ve been a Wolf for two years. You really should talk your mother into doing the Misery Trail next year. That’s a real job for an Iron Wolf. Beats any crap mining camp.” Shea smiled and ran her eyes over Deryn. “You’re adopted, you said?”

My Stallion Heart (The Stallions Book 7) by Deborah Fletcher Mello
Danger Guys on Ice by Tony Abbott
Between the Lies (Book One - The Northern Lights Series) by DeKok, Joy
The Dark Defile by Diana Preston
The Freedom of Navid Leahy by Jenna Helland
Portals by Wilson, Maer
Trust Me by Melinda Metz - Fingerprints - 3
Lone Tree by O'Keefe, Bobbie
The Sun King Conspiracy by Yves Jégo
The Union by Robinson, Gina