Read The Devil May Care (Brotherhood of Sinners #1) Online

The Devil May Care (Brotherhood of Sinners #1) 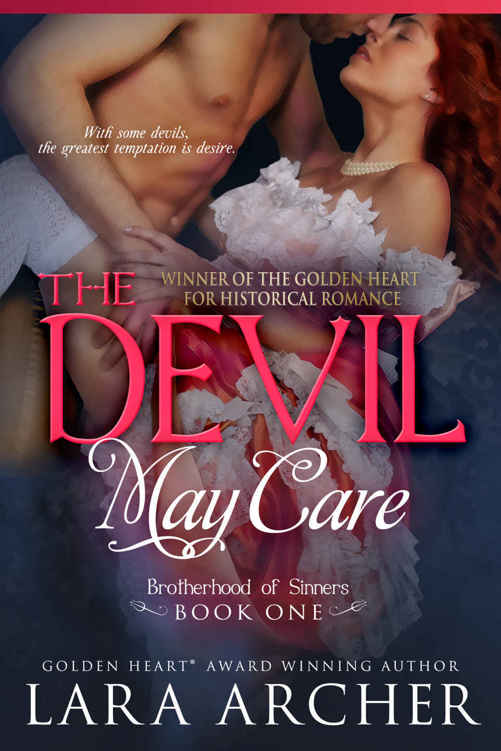 The Devil May Care

All rights reserved. No part of this book may be reproduced, distributed, or transmitted in any form or by any electronic or mechanical means, including information storage and retrieval systems without the prior written permission of the publisher, except in the case of brief quotations embodied in critical reviews and certain other noncommercial uses permitted by copyright law. For permission requests, write to the author at [email protected]

This book is a work of fiction. The characters, events, and places portrayed in this book are products of the author’s imagination and are either fictitious or are used fictitiously. Any similarity to real persons, living or dead, is purely coincidental and not intended by the author.

For more information on the author and her works, please visit
http://laraarcher.com/

Rachel Covington felt like a common criminal. The soldiers marching her into Whitehall Palace kept hard-knuckled grips on their muskets, and one darted glances at her every few moments, as if afraid she’d attack.

Ridiculous.
She was unarmed and half his size—a poor little governess. What did he think she was going to do, scold him about his posture? Force him to eat his carrots and peas?

The one criminal act of her life had been sneaking an extra slice of iced ginger cake up to her room one night, against Lady Greeley’s orders that servants eat nowhere but the kitchens. Hardly a trespass likely to topple the British government.

And yet, someone clearly thought an armed guard was necessary.

Just as clearly, Whitehall wanted something from her, or they wouldn't have sent a solicitor to Lancashire to fetch her from the Greeleys, nor would they have ordered a pack of soldiers to join them at the nearest town. The solicitor claimed the soldiers were only there for her protection, but refused to say why she needed protecting, or why she'd been summoned in the first place.

For pity’s sake, she was no one. She knew no secrets, unless one counted Lord Greeley’s penchant for dallying with the local dairymaids, or Lady Greeley’s habit of hiding a brandy flask in her embroidery chest, just beneath the yellow floss.

Of course, that left the slight possibility that someone had something to tell
her
.

The rush of hope that went through her unsteadied her legs. But what could the British government care about an orphaned girl who’d run from home almost a decade ago? How could such a girl have survived the years in between, and if she had, why had she never let Rachel know she was alive?

Still, Rachel had packed her meager satchel at once and come to London, despite Lady Greeley’s hysterical vows that if she left so precipitously, she’d never find work as a governess again. If there was any chance at all that Sarah was alive, Rachel had to come.

Now the soldiers halted before an unmarked door. One rapped with his knuckles, and the door opened onto a darkened, cramped room. Rachel’s lungs seized.

Don’t panic
, she told herself.
See, there’s a window
.
Small and grimy, but it could be shattered to get air
. Besides, they wouldn’t have brought her here just to lock her in, not when she’d been as good as buried already up in Lancashire. She stiffened her spine, and stepped inside.

In the gloom, it took another moment before she saw the two men.

They stood behind a bulky desk, silhouetted by the glow of a sooty fireplace. The stouter of the two—big-bellied, with white bristling eyebrows and a jowly chin—gave a nod, and the soldiers retreated, closing the door with a snap.

Rachel fought to calm her breathing. Now at least she might have answers.

“Dear God,” hissed the smaller man, a scarecrow creature wearing a frowzy periwig that should have gone to the rubbish heap a decade ago. He blinked at her as though just slapped awake.

“Steady, brother,” said the stout man coolly. His pale eyes assessed her without apology, in a manner she knew well: that of a man accustomed to power. A lord of some degree, no doubt.

Rachel raised her chin and stared just as frankly back at him.

To her satisfaction, he broke the silence first. “You are the Rachel Covington raised by Misses Martha and Mary Covington, of Stone Cottage, in Rookshead, Yorkshire?”

Her pulse jumped: Stone Cottage had been Sarah’s home as well. The last place she’d seen her twin sister, far too many years ago. “I am, sir.”

“And since the death of your great aunts, you have been employed as governess by Lord and Lady Greeley?”

“Yes, sir.” She forced her fingers to soften, not curl into fists.
My sister. Tell me about my sister
.

“Governess. A fine profession for a woman.” The man planted his palms on the desk and bent towards her as though to get a better view of her face. “Tell me, Miss Covington, does it bring you gratification to rear young children in godly learning and moral rectitude?”

She glanced at his glutton’s belly, the stained tobacco pipe near his fingers. He hardly looked the strict religious sort, but zealotry could lurk in the oddest places.

And then a terrible thought struck her.

Good God, he wasn’t interviewing for a
governess
, was he?

Despite his age, perhaps he had young children. Perhaps he’d been warned that London governesses were too worldly, and sought some strict little country mouse who’d bar all sin and corruption from the door.

A horrible shriek of laughter brewed up inside her.

She tamped it down, along with a rising sick feeling in her belly.
I left the Greeley’s for nothing, then
.
Worse than nothing
. But what else had she expected? Women in her position had no more business having hope than did slabs of dried beef.

She straightened her spine. Now that the Greeleys had washed their hands of her, she had no other prospect of earning her keep. “Surely, sir,” she said, forcing a demure smile, “a woman can have no more meaningful employment than educating children in what is decent and good.”

A harsh bark of laughter exploded from the shadows to her right.

She whipped her head around. Good Lord, there was a
third
man in the room! All this time, he’d stood hidden in a dark recess behind a bookcase.

Now he leaned forward just enough that the orange glow of the fireplace caught the side of his cheek, the sweep of his hair. And his eyes. They were glaring eyes, fire-bright.

In contrast to the doughy older men, this man’s face was all taut angles, his posture full of strength and tight-leashed power. In the strange light, he could almost have been a gargoyle. Or a devil. Though she supposed he was rather too handsome for either.

She met his eyes directly, looked straight into those burning depths. And felt instantly scalded. Something clutched in her belly, and she took a step back.

He hates me
, it struck her at once.
He hates me with everything in him
.

That harsh laughter cracked again. “Well, Helm,” the gargoyle-man said, his voice deep and silkened by the accents of an aristocrat. “It seems you’ve found yourself a little nun. A true devotress.” The eyes raked over her again, stinging like a hot blade. “She’s useless to us.”

Useless
? What in blazes?

What use could they have hoped she’d be?

“Patience,” said the stout man—
Helm
, apparently. “There’s a great deal we still don’t know. Please, Miss Covington. If you’ll allow an impertinent observation: you’re a lovely girl, even dressed severely as you are. I am aware that your great aunts left you nothing when they died, that all funds went to their Dissenters’ church. But why become a governess? Why not marry instead?”

The gargoyle laughed again, not pleasantly. “Yes, speak up, miss.” He lounged against the wall, arrogant as a pasha, arms crossed over his chest. His eyes bored into her as if he saw straight through to her backbone. “When the time came to procure your own bread, why did you not snare a rich husband with your feminine wiles?” The corner of his mouth quirked unkindly. “Assuming you
have
any feminine wiles.”

Chicken Caccia-Killer (A Jordan McAllister Mystery) by Lipperman, Liz
Dead Jealous by Sharon Jones
That'll Be the Day (2007) by Lightfoot, Freda
Poems 1962-2012 by Louise Glück
Death Stretch by Peters, Ashantay
I'll Be Yours for Christmas by Samantha Hunter
Under My Skin by Shawntelle Madison
A Fresh Start for Two by Keira Montclair
Wolver's Reward by Jacqueline Rhoades
Mistaken Identity by Scottoline, Lisa