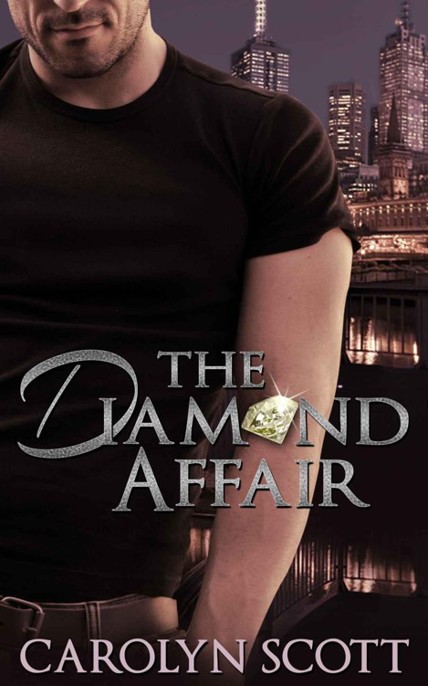 Ruby Jones had
thought she was alone with her diamonds. She was wrong. Someone was in the
hallway beyond her workshop door. The
tap tap
of footsteps on the
floorboards was loud in the silence, louder even than her rapidly beating heart.

She froze. At ten
p.m, visitors to her first floor workshop were only there for one thing.

To steal her
gems.

Maybe, just
maybe, her presence would scare off the opportunistic thief. "Is that you,
Aaron?" she called out, though the footsteps didn't belong to her
assistant. After working together for four years, she knew his light, rapid
step. These footsteps were heavier, slower, as if the person were being
cautious. Or trying to sneak.

Ruby sat very
still, straining to hear over the blood rushing between her ears. Silence. Maybe
she'd been mistaken. After all, there was more than enough jewelry in the downstairs
store safes to keep him occupied. Why would anyone need to venture upstairs at
all?

Bolstered by
logic, she got up to investigate. She picked up the slim jeweler's knife, just
in case logic proved fallible, and eyed the telephone on her desk. If she called
the police based on footsteps alone, she'd sound paranoid. But she
had
heard something. Better to be safe than sorry.

She reached for
the phone just as the door swung open and crashed back against the wall. She
gasped. A gorilla of a man stood in the doorway holding a gun.

"Don't touch
the phone," he growled. He waggled the gun, directing Ruby away from the
desk. "Drop the weapon."

Ruby obeyed
although her shaking body didn't want to move out of reach of the phone. But
she knew the consequences if she didn't do as ordered. The intruder had a
reputation for ruthlessness. His boss even more so.

But the boss had
no reason to rob her, or send his goon around to wave a gun in her face. He was
insanely rich, he didn't need to resort to petty theft. What was going on?

"You're
Frank, aren't you?" she said, trying to keep her voice steady. "Guy Beauvoir's
employee?"

"Head of
security actually." He thrust out all of his chins, making the ruddy flesh
wobble. ‘Fat Frankie' his boss had called him yesterday, but only after the
gorilla left them alone in Guy's office. Even Beauvoir didn't want to insult
him to his face.

She swallowed and
waited, torn between talking to him and keeping her mouth shut. His gaze darted
around the small room, taking in her equipment and tools before settling on the
small diamonds lying loose in the tray on her workbench. His gaze flicked back
to her.

"What do you
want?" she asked, unable to keep quiet any longer.

"Where is
it?" he said from the doorway.

"Where is what?"
She shrugged. "If it's gems you're after there's some in that tray, the
rest are in the safe." She indicated the sturdy safe squatting in the
corner. "Take what you want. I'm insured."

She hesitated and
he pointed the gun higher, aiming at her head. One shot and she was dead. Ruby
didn't doubt for a second that Fat Frankie would have any qualms about pulling
the trigger. Panic and bile rose in her throat as she fumbled with the combination
lock.

The door opened
and she pulled out tray after tray of diamonds, sapphires, rubies and other
precious and semi-precious stones. Some were still in their raw form, others
cut, polished and ready to be crafted into jewelry pieces by herself or Aaron. It
broke her heart to think all their hard work was about to be snatched away by
the sausage fingers of Fat Frankie simply to fill the vaults at Guy Beauvoir's
mansion.

She had no idea
why one of Australia's richest and shadiest men wanted her stash of gems, but
she wasn't about to argue with his right-hand man. Not when he was reported to
be trigger-happy and fiercely loyal to his boss.

Damn it, why had
she accepted Beauvoir's offer to visit him yesterday against her better
judgment? Frankie's presence must be connected. But how? If only she'd refused
the invitation.

There was no point
speculating because she would always have accepted his offer to view the
Florentine diamond. No matter that she knew he must have procured it through
the black market. It had been a once in a lifetime opportunity. She didn't
regret it, even now.

She knelt in
front of the safe, holding the trays, Fat Frankie standing over her. He clicked
his tongue. "It's not here." He kicked the nearest tray, scattering
her stones—her precious, beautiful gems—all over the workshop. It would take
her forever to find them all.

"Then tell
me where it is." His foot nudged another tray.

"There are
diamonds all over my floor," she snapped. "Which one in particular?"
Even as she said it, she knew. There was only one diamond Guy would be
concerned about losing. One extremely valuable diamond. "The Florentine,"
she said on a breath.

"Wrong. The
boss says you do and I've gotta retrieve it. Whatever the cost." He shot
her a cruel smile and his hand flexed around the gun.

She swallowed
down her fear and stood. This was absurd. There must be some mistake. How would
she, a small-time gemologist and jeweler, get past Guy Beauvoir's security? The
man had more locks and alarms than a bank. The idea that she could steal even a
pencil from him was ridiculous.

"Mr. Beauvoir
must be mistaken," she said. "I don't have the Florentine. Why in the
world does he think I do?"

Fat Frankie
hesitated as if weighing up whether to tell her. "You were the last one to
handle it," he finally said. "And you overheard the boys discussing
which route they were going to take to get it to the boss's house."

She had? She
frowned, trying to recall the previous day when she'd been charmed by Guy Beauvoir
in his suite of offices. But all she could remember was the Florentine and its
magnificent clarity. The color was a rare citron and the light bounced off its
facets in glorious patterns. She'd never held anything like it. It was as
beautiful as she'd always imagined.

"You were
seen on the security footage, listening." Fat Frankie frowned too. "Near
the palms," he added.

"What palms?"
Then she remembered the two tall potted palm trees in the foyer where she'd
stopped to pull out her notebook and pen. She'd wanted to write down a
description of the Florentine while it was still fresh in her mind. None of the
historical accounts did it justice.

"Yeah, see?"
Fat Frankie said, his expression clearing. He must have doubted his own
security intelligence and begun to believe her. "You were there. You did
overhear the boys."

"I don't
have it! Do you actually think I'd steal from Guy Beauvoir then return here? Are
you crazy?"

Ruby wanted to be
brave. She really did. But her legs felt like water and she was sweating all
over. Her brains were about to be scattered around the room along with her
gems. Oh God, why her? She tried to think, tried to clear her mind of the haze
of fear but she couldn't.

"Please don't
shoot me," she whispered.

"I don't
want to mess up that pretty face of yours, Mizz Jones, but I will. Boss's
orders. Just tell me where this diamond is and I'll let you go."

Even if she had
it, he'd never let her go. She looked away and searched for something to
distract him. Her gaze settled on the knife she'd put down. It perched near the
edge of her desk.

"Okay,"
she said, sucking up her welling tears. "There's another safe. A small
one, in the desk drawer."

Fat Frankie
stepped away but continued to watch her. "Go open it. Slowly."

She crossed the
carpet, stepping on an opal on the way. She stood so that Frankie couldn't see
the knife from his position near the safe. She picked it up with one hand as
she opened the top drawer with the other. She lifted out the petty cash tin. It
wasn't even locked. But it would do. It would have to.

She turned around
and nearly smacked into Frankie's well-cushioned chest. He reeked of sweat and
garlic. She gagged on a sob.
Please God, let this work
.

She thrust the
tin into his stomach. He humphed and caught it with both hands, lowering the
gun. Ruby lunged, pressing the blade into his fleshy side then using the moment
of distraction to snatch the gun off him.

He squealed in
pain, clutching at the knife sticking out of his side. "You bitch!"

He shouted
obscenities at her as she grabbed her handbag off the desk and raced out of the
workshop. She ran down the stairs, through the shop and onto Collins Street
without looking back. There were no sounds of Fat Frankie following her but she
couldn't be sure and didn't wait to find out. The sooner she called the cops
the better, but she wanted to be safe when she did it.

Collins Street
was deserted on a Wednesday night. The office workers had long gone, the shops
were closed. There wasn't even a café open where she could make a call. She
pushed on to her car, parked a block away. By the time she reached it, she was
sweating from both the fear and Melbourne's heat wave. Even at night the warm
air clung to her like a second skin.

She drove to the
nearest police station but changed her mind and didn't stop. If she reported
Fat Frankie's confrontation she would have to explain about the Florentine and
that would lead to questions as to why she hadn't reported Guy Beauvoir's
latest acquisition to the authorities earlier. Technically she hadn't done
anything illegal as the Florentine wasn't stolen property—it had simply
disappeared nearly a hundred years ago—but it would certainly lead to doubts
about her own clean reputation. If it became known that she was dealing with
someone of Guy Beauvoir's reputation, her clients would stay away. Celebrities
and socialites couldn't afford to be connected to a jeweler with a dubious
reputation, and she couldn't afford to lose their custom.

Instead she broke
the speeding laws to get to her St Kilda apartment as quickly as possible. Fat
Frankie may be injured but if he was smart—and the jury was still out on that
one—he would head straight there. She didn't have much time. Get in, grab some
essentials then get out. The most essential of her essentials wasn't the
toothpaste, spare underwear or the ring her father had made for her, although
she shoved all of those things into an overnight bag. The most important thing
was a phone number scribbled on the back of a napkin in her brother's
handwriting.

She thrust it
into her handbag and left, locking the door behind her. She passed Evie from
number six on the stairs.

"Hey, Ruby,"
she said cheerily. Evie was always cheery even at six a.m. on their morning
run. "There's a man checking out your car. Big, fat ugly mother. Want me
to call the cops?"

Fuck
! "No thanks, not necessary. Hey, will you need your car for
the next couple of days? Mine broke down and I know you catch the train to
work. I promise I'll take good care of it."

"No need, it's
a piece of trash. It's insured so do whatever you want with it." She
tossed Ruby her keys. "You okay, Sweetie?" For once, Evie sounded
worried. Her pretty brow furrowed. "You're not in any trouble are you?"

"Nothing a
few margaritas won't help me forget when it's all over."