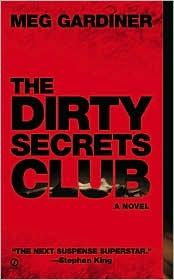 An intelligent and stubborn heroine who's just emotionally vulnerable enough to be empathetic lifts this novel from Gardiner (_China Lake_), a Californian now living in London making her U.S. debut. Dr. Jo Beckett, a forensic psychiatrist (or deadshrinker), performs psychological autopsies to uncover the truths behind grisly crimes. Recruited to consult on the possible suicide of prosecutor Callie Harding, who drove her BMW off a San Francisco bridge and struck an airport minivan on the road below, Jo discovers this accident is the latest in a string of high profile murder-suicides. As Jo and the SFPD's Lt. Amy Tang dig deeper, they uncover the Dirty Secrets Club, a shadowy group of citizens whose members include a noted fashion designer and a football star, both of whom committed very public suicides. Still coming to terms with her doctor husband's recent death, Jo struggles to pinpoint the club's origins, realizing that a former member may be systematically driving the remaining members to their deaths. Gardiner should win new fans on this side of the Atlantic with this adrenaline-filled thriller.
(June)
Copyright © Reed Business Information, a division of Reed Elsevier Inc. All rights reserved.

Starred Review
San Francisco forensic psychiatrist Jo Beckett doesn’t cut open victims’ bodies. She dissects their lives. It’s her professional duty to determine why the dead get dead. This time around, Beckett just might be in over her head. Residents of San Francisco, already edgy from recent earthquake tremors, have become further unhinged by a series of provocative—and very public—murder-suicides. They’re tied to the Dirty Secrets Club, a group that promises anonymity to high-profile citizens aching to confess their sins. U.S. Attorney Callie Harding was the driving force behind the club until the night she drove her BMW off a city overpass, ending her life and those of three others. The word dirty was scrawled in red lipstick across her upper thigh, a clue that ultimately leads Beckett and diminutive SFPD detective Amy Tang to a sadistic psychopath with vengeance on his mind. Beckett and Tang are close to collaring the culprit when Jo receives a threatening letter detailing a dark secret of her own. This is the U.S. debut for Gardiner, an American who makes her home in London. Stephen King has raved about her in print, and she proves more than worthy of that praise in this twister of a tale teeming with thrills and chills. --Allison Block

F
ire alarms sang through the skyscraper, piercing and relentless.

Under the din people poured across the marble lobby toward the doors, dodging fallen ceiling plaster and broken glass. Outside, Montgomery Street crackled with the lights of emergency vehicles. A police officer fought upstream to get inside. The blonde was ten feet behind, struggling through the crowd.

The man in the corner paced, head down, needing her to hurry.

People rushed by him, jumpy. "Everything crashed off the bookshelves. I thought for sure it was the Big One."

The man turned, shoulders shifting. The Big One? Hardly. This earthquake had just been San Francisco's regular kick in the butt. But it was bad enough. On the street, steam geysered from manholes. And he could smell gas. Pipes had ruptured under the building. The quake was Hell saying,
Don't forget I'm down here—you fall, I'm waiting for you.

He checked his watch. Come on, girl, faster. They had ten minutes before this building shut down.

A fire captain glanced at him. He was tall and young and moved like the athlete he was, but nothing clicked in the fire captain's eyes,
n
o suspicion, no
Is that who I think it is?
Out of uniform he looked ordinary, a plain vanilla ail-American.

The blonde neared the doors. She stood out from the crowd: platinum-sleek hair cinched into a tight French twist, body cinched

into a tighter black suit. A cop stuck out an arm like he was going to clothesline her. She flashed an ID and slid around him.

He smiled. Right under their noses.

She pushed through the doors and walked up, giving him a hard blue stare. "Here? Now?"

"It's the ultimate test. Secrets are hardest to keep in broad daylight."

"I smell gas, and that steam pipe sounds like a volcano erupting. If a valve blows and causes a spark—"

"You dared me. Do it in public, and get proof." He wiped his palms on his jeans. "This is as public as it gets. You'll supply my proof."

Her hands clenched, but her eyes shone. "Where?"

Upstairs, they strode out of the express elevator to find the law firm abandoned. The fire alarm was shrieking. At the receptionist's desk, a computer was streaming a television news feed.

"—minor damage, but we're getting reports of a ruptured gas line in the Financial District ..."

The blonde looked around. "Security cameras?"

"Only in the stairwells. It's bad business for a law firm to videotape its clients."

She nodded at a wall of windows. The October sunset was fading to dusk, downtown ablaze with light. "You plan to do this stunt against the glass?"

He crossed the lobby. "This way. The building's going to shut down in"—he looked at a red digital clock on the wall—"six minutes."

"Emergency procedure. If there's a gas leak the building evacuates, they shut down the elevators and seal the fire doors. We have to be out by then."

The wall clock counted down to 5:59. He started a timer on his watch.

"Yeah. I was meeting with my lawyers when the quake hit. It limits damage from any gas explosion." He pulled her toward a hallway. "I can't believe you're scared of getting caught with me. Not Hardgirl."

"What part of
secret
do you not you understand?"

"If we're caught, they'll ask what we're doing here, not what we're hiding in our pasts."

"Fair point." She hurried alongside him, eyes bright. "Were you waiting for an earthquake before you did this?"

Good guess—this was the third minor quake in the past month. "I got lucky. I've been looking for the perfect opportunity for weeks. Chaos, downtown—it was karma. I figured seize the day."

He rounded a corner. A glass-fronted display case along the wall had cracked, spilling sports memorabilia on the floor.

She rushed past. "Is that a Joe Montana jersey?"

He opened a mahogany door. Across a conference room the red embers of sunset caught them in the eyes. The hills of San Francisco rose in front of him, electric with light and packed to the rafters, like a stadium.

He shrugged off his coat, took a camera from the pocket and handed it to her. "When I tell you, point and click."

He crossed the room and opened the doors to a rooftop terrace. Kicking off his shoes, he strode outside.

"You complained I was using the club as a confessional. You told me I was seeking expiation for my sins, but said you couldn't give me absolution," he said.

Deep below them, the building groaned. She walked outside, breathing hard.

"Damn, Scott, this is dangerous—"

"Your dare was—and I quote—for me 'to offer a public display of penitence, and for christsake get proof.'"

He pulled his polo shirt over his head. Her gaze seared its way down his chest.

Now,
he thought. Before his courage and exhilaration evaporated. He unzipped and dropped his jeans.

He backed toward the waist-high brick wall at the edge of the terrace. "Turn on the camera."

"You came commando-style to a meeting with your lawyers?"

Naked, he climbed onto the brick ledge and stood up, facing her. Her lips parted. Thrilled to his fingertips, he turned to face Montgomery Street.

A salt breeze licked his bare skin. Two hundred feet below, fire and police lights flickered through steam boiling from the ruptured pipe, turning the scene an eerie red.

He spread his arms. "Shoot."

"You have got to be kidding me."

He glanced over his shoulder. She was shaking her head.

"Bad?
You tattooed
Bad
on your tailbone?"

His watch beeped. "Four minutes. Do it."

"You're a badass?" She put her fists on her hips. "You get all torn up about a nasty thing you did in college, and want to unload it on us—fine. But you can't tattoo some preening jock statement on your butt and call it repentance. That's not remorse. Hell, it's not even close to being dirty."

Frowning, she stormed inside.

He turned around. "Hey!"

Was she leaving? No, everything depended on her getting the photo—

She ran back out, holding a piece of sports memorabilia from the display case.

It was a jockey's riding crop. He swallowed.

She whipped it against a potted plant with a wicked crack. "Somebody needs to take you down a notch."

He nearly whimpered. She wanted points, too. This was even better.

Snapping the crop against her thigh, she crossed the terrace. Evaluating the ledge, she unzipped her ass-hugging skirt, wriggled it down,
and
stepped out of it.

"It's time to make your act of contrition," she said.

In the tight-fitting black jacket, she looked martial. The stilettos
could
have put out his eyes. The black stockings ran all the way to the top of her thighs. All the way to—

"What's that garter belt made from?"

"I have a drawer full. I got them in the divorce." She held out her hand. "Don't let me fall."

"I won't. I have perfect balance." He felt crazed and desperate and
God,
he needed to get her up here now. "I get paid four million dollars a year to catch things and never let them drop."

She gripped his hand. Her smooth stocking brushed his leg.

He could barely speak. "This is penance?"

"Pain is just one step from paradise."

She looked down. Her voice dropped. "Christ. This is asking for a heart attack."

She looked up. "No—I didn't mean it as a crack about David."

But if David hadn't dropped facedown with a coronary, they
w
ouldn't be here. The doctor's death had created an opening, and Scott wanted to fill it. This was his chance to prove himself and gain admission to the top level of the club.

The breeze kicked up. In the lighted windows of the skyscraper across the street, people gazed down at the fire trucks. Nobody was Poking at them.

"Right under their noses," he said. "Bonus points for both of us."

"Not yet." She handed him the camera. "Set it so we're both in the frame."

He set the auto timer to take a five-shot series and posed the camera on the ledge. His stopwatch beeped. Three minutes.

She planted her feet wide for balance. "What happens to guilty people?"

Blinking, he turned around and carefully knelt down on all fours. "I've been bad. Spank me."

She slapped the crop against her palm. "What's the magic word?"

Relief and desire rushed through him. "Hard."

The camera flashed. She brought the crop down.

The pain was a stripe of fire along his backside. He gasped and grabbed the ledge.

She whipped the crop down. The camera flashed.