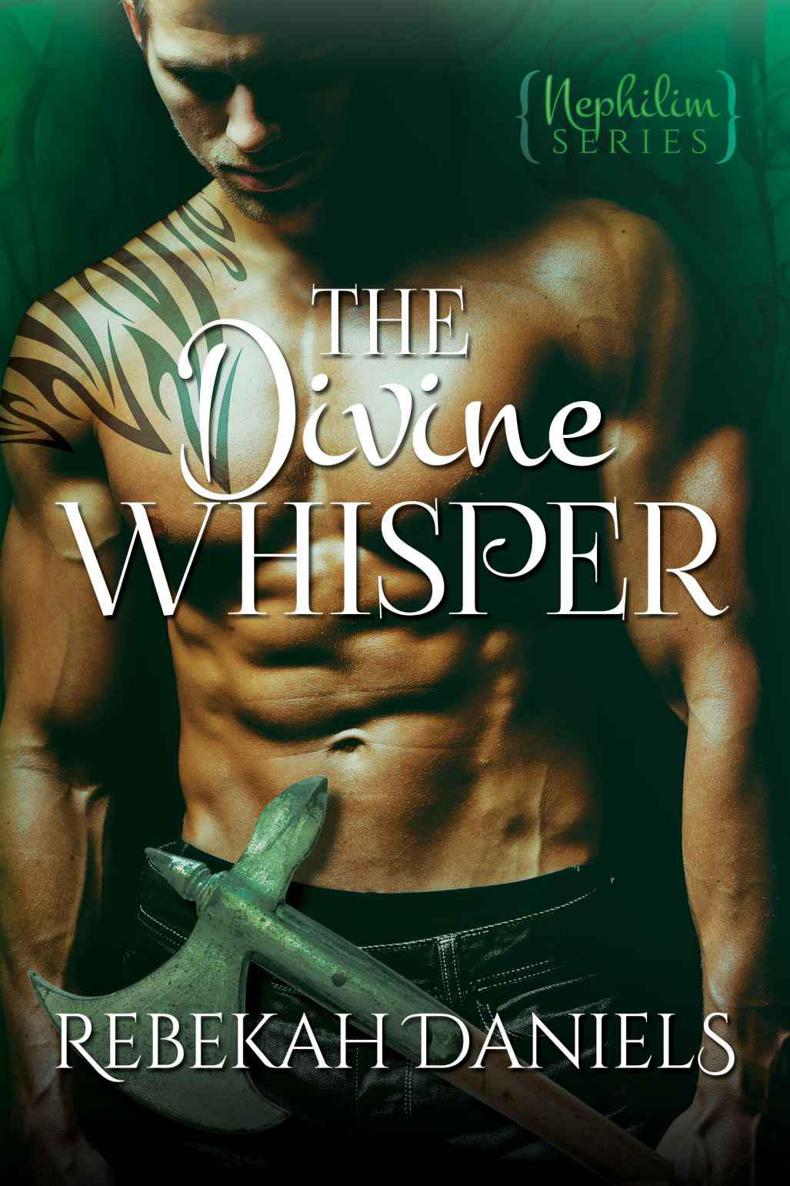 All rights reserved. This book may not be reproduced, scanned, or distributed in any printed or electronic form without the permission of the author, except in the case of brief quotations embodied in critical articles and review.

This book is a work of fiction and any resemblance to persons, living or dead, or places, events or locals is purely coincidental. The characters are productions of the author’s imagination and used fictitiously.

This book is dedicated to a loving woman that was recently lost to us.
Gone but never forgotten, Grandma Colleen.

“I miss your smile.

I miss your smell.

I lost my confidant, my grandma, my friend.

What will never change,

What will always be true.

It is definitely different without you.”

“It’s wrong to fear the one with nothing to lose when it’s the person that has their world threatened, you need to worry about.”

There was an archangel that was one of the most angelic beings ever to be. He was a trusted confidant to God, he was the most majestic, and not another one could compare to his beauty. This celestial being’s name was Lucifer.

Lucifer wasn’t satisfied with his trusted position and wanted more, much more. He came to believe that he should be the Almighty, and started conspiring to overthrow God and take his place of power. In his delusional conquest, he convinced a group of angels to side with him and go to battle against their former brethren. Because of this, the Great War in Heaven started.

There was a fierce battle between angel and angel, brother and brother. The remaining two thirds of God's angels fought valiantly for their lord. There was much killing, but neither side would relent that easily.

Through the intense rage and hatred that Lucifer was feeling, he began to transform from the angelic creature he was to an enormous and fierce blood red dragon. This menacing dragon had seven heads, ten horns, and a deadly forked tail. With the transformation came a renewed sense of energy fueled by his rage.

After seeing the transformation of Lucifer, God’s noble archangel, Michael, knew that something needed to be done. He charged at the raging dragon and fought with all the strength, skill, and speed that God had granted him. The battle waged on, and Lucifer began to tire. The number of angels left in his army had dwindled, and he knew the end was coming soon.

Lucifer and his band of followers were eventually defeated. God quickly cast Lucifer and the remaining traitorous angels down from heaven and onto Earth to wait until final judgment could be made regarding them. From that day forth, the once angels were now demons and they served under the great evil, now known as Satan.

Satan declared that he and his band of demons would do eve
rything in their powers to thwart God’s plan. Opportunity finally arose shortly after, when along came man. God’s very own perfect creation―placed on the same rock as his nemesis. The temptation was just too sweet for Satan to ignore. He soon found out what a powerful tool this
temptation
could be.

As more people populated the planet, Earth became the Devil’s own playground. Anytime he could intercept God’s will or intentions, he would take it. The more time he spent there, the more rage fueled his being. Soon, he was getting his thrills by instilling greed and selfishness into men and women. He started to rebuild his army in order to defeat The Almighty by turning as many souls as he could to the side of evil. Satan and his demons would torment the innocent or bargain for their souls.

Still, his favorite form of corruption was temptation. It worked so well with God’s precious Eve; but he wanted to go bigger… better. Therefore, when the Watcher angels showed weakness to some Earth maidens, he pounced. A little push here, a little nudge there, and voilà… fallen angels.

Satan just sat back and watched as things unfolded. The longer the “angels” were away from heaven, the more devious they became. He smiled when the fallen gave away trade secrets to their fair maidens, and he laughed when children that God never meant to be were conceived. It was a devilishly joyous time when these children grew into monstrous giants with unbelievable strength and powers, combined with a mean streak a mile long.

The world was becoming corrupt at an astronomical rate. These half-breeds were evil incarnate, and the vile was spreading like poison. His army was going to be unstoppable! Now he had this new weapon, these nephilim.

“Where are you, you little shit?”
The man threw open another door that opened to a blackened room.

The sound of the door hitting the wall made him even angrier.

“If she wouldn’t have run away, there wouldn’t be a dent in the wall, now would there?”
The voice inside his head made him grit his teeth.
“Try the next room.”

He turned away from the empty room and headed back down the hallway.
All he wanted to do was watch the game and drink his beer, but no, he was trying to find the errant brat that always had to plague his life. She never stopped wanting things, therefore never left him alone.
Dammit, if you’re hungry… go find some fucking food
! he thought.

Around six or seven years ago, his woman and he slipped up and she got pregnant.
What a fuck-up that was! The money the government gave them just to have the brat was enough to look past all the negatives, though.

He admitted that she did come in handy now and then.
For the most part he had her trained and all he had to do was snap his fingers to get her to come running. Go fetch this, cook me that… The list was endless.

“Did you catch her yet, baby?”
His wife’s voice echoed down the hallway from the bottom of the steps. The sound brought him back to what he was doing.

“She can’t hide forever. Don’t worry, you’ll get her.”

The little brat knew the rules!
Never bother them, and under no circumstances bring any attention to yourself.

“You know what would happen to you, if she were to tell what happens here.”

He didn’t care if her fever was over a hundred, no school nurse should have ever called them today.
To top it off, he had to leave and pick her up, because it was “regulations”. The man flexed his hand, successfully bringing back the sting from earlier when he showed her what he thought of that.

During her well-deserved punishment for breaking the rules, she ripped his shirt; his favorite shirt no less.
He knew it was on purpose. If her wide eyed look didn’t tell him that, her running away from him was the nail in her coffin.

Yes, he was going to make her pay.

Opening the next door revealed another empty room. Except when he turned to leave, he noticed a shadow move on the floor by the bed.

“What do we have here?”
He taunted as he slowly walked over toward the shadow. The silence in the room was only broken by the sound his boots made on the hard floor. Leaning down, it was the flaxen hair that stood out in the shadows and gave away her position.

“Get down there and pull her out!”

Going down to one knee, he reached under the bed until he felt her arm. Grabbing it, he held on while she vigorously tried to pull away. A convenient little twist made her whimper and comply with his unspoken command.

“That’s it. Maybe shake her around a bit, first!”

Grabbing onto her hair, she screamed when he complied with what the voice told him to do.
Feeling the hairs pull from her scalp was an exhilarating feeling that never got old. Holding her off the ground so they were eye level, he snarled in her face.

“You ran.
You know what happens when you run.” He inwardly laughed at the tears streaming down her cheeks.

“I’m sorry.
It was…an accident. And at school…they saw I was…sick…I didn’t say anything. She tried to explain through her sobs, and he cringed at how annoying the sound was. Already having tuned her out, he started walking down the hallway; all the while, keeping her off the ground as she braced herself with his arm.

He held her a little higher, as he made it to the top of the stairs.
Once again, he took note of how small she was. Weren’t kids her age supposed to be growing? It seemed like she had been the same size for years.

Peering over the landing, he looked down to his wife and was thrown off again by the resemblance of the two.
He could be holding a miniature version of her right now. The physical aspects were where the similarities stopped, though. His woman was ruthless and took shit from no one; unlike the pest he held, who let everyone walk all over her.

“Hey, lookie what I caught,” he yelled down.

Denise looked up and smiled. “Ooo! Should I get the bricks?” Laughing, she set down her magazine, and started to get up.

Before he could answer, the slight grip on his arm faltered and the strands of hair broke free from her scalp.
Sighing in annoyance, he watched as she tumbled down the flight of stairs and came to a stop, face down and unmoving, at the bottom.

Tossing the hair aside that was left in his grip; he started making his way down the steps.

He watched as Denise made it to her first and started yelling.
“Get up!” Delivering a swift kick to her side, she tried to get the brat’s attention. “Don’t think this will get you out of anything. Get up!”

“Maybe she’s dead.
That would solve so many problems for us.”

Kneeling down beside her, he flipped her over onto her back, and found himself looking into eyes that were only partially open.

“It hurts…”
The whimpering words came from the broken form on the ground.

Ugh!
He hated when she whined! Peering down at her, he stood back up. “Quit feeling sorry for yourself and get off your ass!”

Stepping over her, and making his way into the living room, he put an arm around his wife before hollering over his shoulder.
“I want our dinner in front of us in ten minutes. After that, this place needs scrubbed.”

When she didn’t move right away, he got even more irritated.
“I’d start moving, or I’ll make it so you
really
can’t move.”

There.
That’ll light a fire under her ass
, he thought as he walked away.