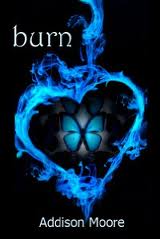 Other books by Addison Moore;

This novel is a work of fiction. Any resemblance to peoples either living or deceased is purely coincidental. Names, places, and characters are figments of the author’s imagination. The author holds all rights to this work. It is illegal to reproduce this novel without written expressed consent from the author herself.

Chapter Five — Off with Her Head

Chapter Seven — Out and About

Chapter Thirteen — One Count Down

Chapter Fifteen — Get a Job

Chapter Thirty — Down and Dirty

Chapter Thirty-Three— I’ll Stumble For You

Chapter Thirty-Nine — Into the Woods

Chapter Forty-One — If I Leave You Now

Chapter Forty-Six — All Aboard

Chapter Forty-Nine — The Death of You

The future wafts in and out of my world like a ghost—like a lumbering beast, begging to be tamed. For so long it sat locked in mystery, surrounding me, fickle as the wind. I see it now for the noose it is, the game that never satisfies, the warrior that always kills.

The past proved to be set in stone, the immovable rock of my existence that cast its shadow into the valley of death. But it is the future’s bright light that draws me in, the blinding rays that pull me forward with bionic, magnetic, force. They row me towards my destiny with indescribable power, to a fate questionably determined—washed in the patina of hope.

You so much as turn another page, and I will let Mom, Dad, the Fosters, and the entire population of Paragon in on the fact that
Carly
left school in April to give birth to your quadruped spawn in New York, where it will be raised as her brother, by her drunk of a stepmother and questionably employed father. If you haven’t scampered already, I’ll make sure your son, whom I shall affectionately refer to as the ‘bastard’, knows what a coward both you and his mother are when the time is right, and trust me, that day will come, ready or not.

I close the covers and clutch the book near my chest.
Carly
has a baby? Bet Logan doesn’t know that.

I rub my finger against the hard lines of the plain powder blue diary—the pages glued shut long ago by Chloe herself. It’s like holding dynamite—an entire explosion of secrets—the shards refracting into people’s lives.

I pick up the personalized message Chloe left me that slipped out after the first page.

I must admit, I’m pretty happy with the changes so far. I mean, I don’t know Chloe’s brother at all, he graduated last year, but I know
Carly
plenty.
Carly
was the sole reason I was able to channel my hatred into a perfect funnel of angst and kill a Fem. Just the thought of her with Logan sends a rush of heated adrenaline up my spine.

I hop down out of the butterfly room and head over to bed. I cradle the diary as I get under the covers and pull my pillow up behind me. How am I going to read Chloe’s diary—thick as a bible, knowing she wanted Logan as much as I do? I guess my one consolation is the fact she’s dead, for now anyway.

I pull back another page, slow and careful like peeling off skin from
a sunburn
.

Am I supposed to say Dear Diary? I think diaries are stupid. I think diaries belong in a thirteen-year-olds bedroom, tucked under the bed, with a balding one-eyed teddy bear keeping watch.

Let the record show, that this diary was forced upon me because my mother thinks it will help to get my feelings down on paper. I believe the word she used was cathartic. I told her I’d write down my genetic code in Latin, burn my soul onto parchment, like the Shroud of Turin, in exchange for never setting foot in Dr. Booth’s office again. If I never see that man’s face again it will be too soon. Nothing was a bigger waste of
time than sitting in his overstuffed chair staring past him out the window for an hour straight.

It wasn’t helping, so I just stopped going. My mom even tried dragging me to the car. So Dr. Booth caved a little and suggested the diary. My mother picked it up on the way home from their private
pow
-wow, and now here you are, rubbing against my bare knees, a place Ellis would give his left testicle to be.