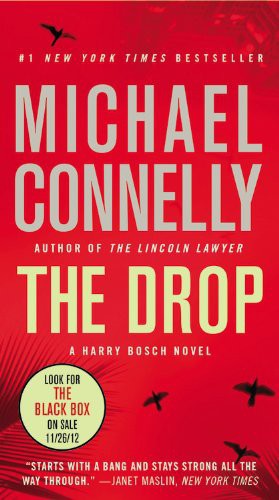 Harry Bosch is facing the end of the line. He's been put on the DROP - Deferred Retirement Option Plan - and given three years before his retirement is enforced. Seeing the end of the mission coming, he's anxious for cases. He doesn't have to wait long. First a cold case gets a DNA hit for a rape and murder which points the finger at a 29-year-old convicted rapist who was only eight at the time of the murder. Then a city councilman's son is found dead - fallen or pushed from a hotel window - and he insists on Bosch taking the case despite the two men's history of enmity. The cases are unrelated but they twist around each other like the double helix of a DNA strand. One leads to the discovery of a killer operating in the city for as many as three decades; the other to a deep political conspiracy that reached back into the dark history of the police department.

This is for Rick, Tim and Jay, who know what Harry Bosch knows
.

C
hristmas came once a month in the Open-Unsolved Unit. That was when the lieutenant made her way around the squad room like Santa Claus, parceling out the assignments like presents to the squad’s six detective teams. The cold hits were the lifeblood of the unit. The teams didn’t wait for callouts and fresh kills in Open-Unsolved. They waited for cold hits.

The Open-Unsolved Unit investigated unsolved murders going back fifty years in Los Angeles. There were twelve detectives, a secretary, a squad room supervisor, known as the whip, and the lieutenant. And there were ten thousand cases. The first five detective teams split up the fifty years, each pair taking ten randomly chosen years. Their task was to pull all the unsolved homicide cases from their assigned years out of archives, evaluate them and submit long-stored and forgotten evidence for reanalysis with contemporary technology. All DNA submissions were handled by the new regional lab out at Cal State. When DNA from an old case was matched to an individual whose genetic profile was carried in any of the nation’s DNA databases, it was called a cold hit. The lab put cold hit notices in the mail at the end of every month. They would arrive a day or two later at the Police Administration Building in downtown Los Angeles. Usually by 8
A.M
. that day, the lieutenant would open the door of her private office and enter the squad room. She carried the envelopes in her hand. Each hit sheet was mailed individually in a yellow business envelope. Generally, the envelopes were handed to the same detectives who had submitted the DNA evidence to the lab. But sometimes there were too many cold hits for one team to handle at once. Sometimes detectives were in court or on vacation or on leave. And sometimes the cold hits revealed circumstances that required the utmost finesse and experience. That was where the sixth team came in. Detectives Harry Bosch and David Chu were the sixth team. They were floaters. They handled overflow cases and special investigations.

On Monday morning, October 3, Lieutenant Gail Duvall stepped out of her office and into the squad room, carrying only three yellow envelopes. Harry Bosch almost sighed at the sight of such a paltry return on the squad’s DNA submissions. He knew that with so few envelopes he would not be getting a new case to work.

Bosch had been back in the unit for almost a year following a two-year reassignment to Homicide Special. But coming back for his second tour of duty in Open-Unsolved, he had quickly fallen into the rhythm of the squad. It wasn’t a fly squad. There was no dashing out the door to get to a crime scene. In fact, there were no crime scenes. There were only files and archive boxes. It was primarily an eight-to-four gig with an asterisk, that asterisk meaning that there was more travel than with other detective squads. People who got away with murder, or at least thought they had, tended not to stick around. They moved elsewhere and often the OU detectives had to travel to retrieve them.

A big part of the rhythm was the monthly cycle of waiting for the yellow envelopes to come out. Sometimes Bosch found it hard to sleep during the nights leading up to Christmas. He never took time off during the first week of the month and never came to work late if there was a chance that the yellow envelopes were in. Even his teenage daughter noticed his monthly cycle of anticipation and agitation, and had likened it to a menstrual cycle. Bosch didn’t see the humor in this and was embarrassed whenever she brought it up.

Now his disappointment at the sight of so few envelopes in the lieutenant’s hand was something palpable in his throat. He wanted a new case. He
needed
a new case. He needed to see the look on the killer’s face when he knocked on the door and showed his badge, the embodiment of unexpected justice come calling after so many years. It was addictive and Bosch was craving it now.

The lieutenant handed the first envelope to Rick Jackson. He and his partner, Rich Bengtson, were solid investigators who had been with the unit since its inception. Bosch had no complaint there. The next envelope was placed on an empty desk belonging to Teddy Baker. She and her partner, Greg Kehoe, were on their way back from a pickup in Tampa—an airline pilot who had been connected through fingerprints to the 1991 strangulation of a flight attendant in Marina del Rey.

Bosch was about to suggest to the lieutenant that Baker and Kehoe might have their hands full with the Marina case and that the envelope should be given to another team, namely his, when the lieutenant looked at him and used the last remaining envelope to beckon him to her office.

Tim Marcia was the squad whip, the detective three who handled mostly supervisory and fill-in duties in the squad. He mentored the young detectives and made sure the old ones didn’t get lazy. With Jackson and Bosch being the only two investigators in that latter classification, Marcia had very little to worry about there. Both Jackson and Bosch were in the unit because they carried a drive to clear cases.

Bosch was up out of his seat before the lieutenant had finished her question. He headed toward the lieutenant’s office with Chu and Marcia trailing behind.

Duvall had a corner office with windows that looked across Spring Street at the Los Angeles Times Building. Paranoid that reporters were watching from the newsroom across the way, Duvall kept her shades permanently lowered. It made the office dim and cavelike. Bosch and Chu took the two seats positioned in front of the lieutenant’s desk. Marcia followed them in, moved to the side of Duvall’s desk and leaned against an old evidence safe.

“I want you two to handle this hit,” she said, proffering the yellow envelope to Bosch. “There’s something wrong there and I want you to keep quiet about it until you find out what it is. Keep Tim in the loop but keep it low-key.”

The envelope had already been opened. Chu leaned over to look as Harry lifted the flap and pulled out the hit sheet. It listed the case number for which DNA evidence had been submitted, plus the name, age, last known address and criminal history of the person whose genetic profile matched it. Bosch first noticed that the case number had an 89 prefix, meaning it was a case from 1989. There were no details about the crime, just the year. But Bosch knew that 1989 cases belonged to the team of Ross Shuler and Adriana Dolan. He knew this because 1989 had been a busy year for him working murders for the Homicide Special team, and he had recently checked on one of his own unsolved cases and learned that jurisdiction over cases from that year belonged to Shuler and Dolan. They were known in the unit as “the kids.” They were young, passionate and very skillful investigators, but between them they had fewer than eight years’ experience working homicides. If there was something unusual about this cold hit, it was not surprising that the lieutenant wanted Bosch on it. Bosch had worked more killings than everybody in the unit combined. That is, if you took out Jackson. He had been around forever.

Bosch next studied the name on the hit sheet. Clayton S. Pell. It meant nothing to him. But Pell’s record included numerous arrests and three separate convictions for indecent exposure, false imprisonment and forcible rape. He had spent six years in prison for the rape before being released eighteen months earlier. He had a four-year parole tail and his last known address came from the state probation and parole board. He was living in a halfway house for sexual offenders in Panorama City.

Based on Pell’s record, Bosch believed the 1989 case was likely a sex-related murder. He could feel his insides beginning to tighten. He was going to go out and grab Clayton Pell and bring him to justice.

“Do you see it?” Duvall asked.

“See what?” Bosch asked. “Was this a sex killing? This guy has the classic pred—”

Bosch looked back down at the hit sheet as Chu leaned over farther.

Bosch glanced at him and then back at the sheet. He suddenly got it. Clayton Pell was born in 1981. He was only eight years old at the time of the murder on the hit sheet.

“Exactly,” Duvall said. “So I want you to get the book and box from Shuler and Dolan and very quietly figure out what we have here. I’m hoping to God they didn’t get two cases mixed up.”

Bosch knew that if Shuler and Dolan had somehow sent in genetic material from the old case labeled under a more recent case, then both cases would be tainted beyond any hope of eventual prosecution.

“Like you were about to say,” Duvall continued, “this guy on the hit sheet is no doubt a predator, but I don’t think he got away with a killing when he was only eight years old. So something doesn’t fit. Find it and come back to me before you do anything. If they screwed up and we can correct it, then we won’t need to worry about IAD or anybody else. We’ll just keep it right here.”

She may have appeared to be trying to protect Shuler and Dolan from Internal Affairs, but she was also protecting herself, and Bosch knew it. There would not be much vertical movement in the department for a lieutenant who had presided over an evidence-handling scandal in her own unit.