Read The Elephant to Hollywood Online

The Elephant to Hollywood 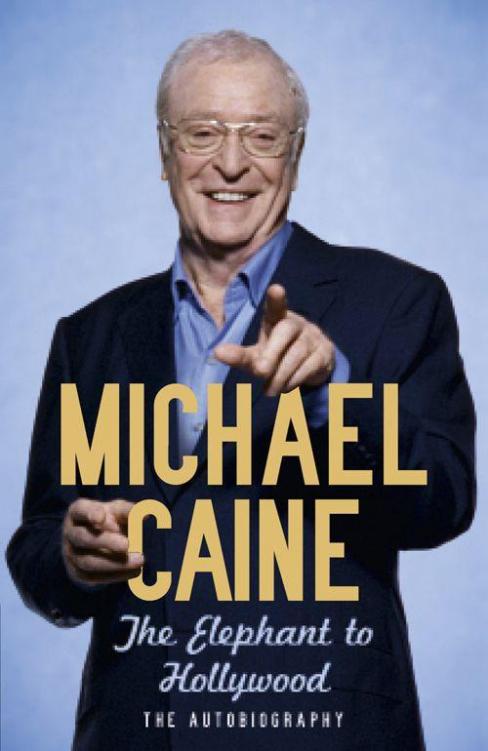 The Elephant to Hollywood

First published in Great Britain in 2010 by Hodder & Stoughton

asserted by him in accordance with the Copyright, Designs and Patents Act 1988.

All rights reserved. No part of this publication may be reproduced, stored in a retrieval system,

or transmitted, in any form or by any means without the prior written permission of the publisher,

published and without a similar condition being imposed on the subsequent purchaser.

To my family: Shakira, Nikki, Natasha, Michael, the father of my three grandchildren, Taylor, Miles and Allegra, and to two of our closest and dearest friends, Emile Riley and Danny Zarem

4 Everyone Gets Lucky Sometimes . . .

7 No Holly, No Woods

11 An Englishman in LA

15 Highs and Lows in Miami Beach

22 Back to the Elephant

23 What It’s Really All About

My Top Ten Favourite Movies of All Time . . .

My Own Favourite Movies

These are the people without whom I wouldn’t be where I am, writing a book about myself . . .

With everlasting thanks to Toni Howard, Sue Mengers, Jerry Pam and Dennis Selinger, who were not only my agents but were and are four of my closest friends. And in the UK, thanks to Duncan Heath, Kate Buckley and Paul Stevens.

With thanks, too, to all my wonderful friends at Hodder & Stoughton: Kate Parkin, Rowena Webb, Karen Geary and Juliet Brightmore. Without them this book would not have been written (or might have been 1000 pages long . . .)

Well, it’s a long way from London’s Elephant and Castle to Hollywood. And the shortest distance between two points is not always a straight line, as my story is going to prove. But then I’ve never been known for doing things the easy way. I wouldn’t have minded easy but things just never worked out like that. In fact – although I couldn’t have known it at the time – they worked out a whole lot better.

Eighteen years ago I thought that my career as an actor was over so I wrote my autobiography
What’s It All About?
to round off my professional life; and that, as far as I was concerned, was that. Fortunately, and not for the first time, I was wrong. Very wrong. The best was yet to come, which, when I look back at my life – the crazy 1960s, the stardom, the glitz and glamour of Hollywood – is really saying something. The last eighteen years have been different – different style, different places and a different idea of happiness – but different has not only been good, it’s been better than I could ever have imagined.

So this is the story of a man who thought it was all over, and found out it wasn’t. It’s the story of the last eighteen years, but it’s also the story of where I came from and where I’m going. I know many people have read my first book, but you don’t get to my age without looking back – and God knows I’ve been to plenty of memorial services – so I’m not going to apologise for telling some of the old tales. But there are plenty of new stories, too, because I’ve had the good fortune to work with a whole new generation of movie stars. And that puts me in a uniquely privileged position. There aren’t many actors whose career has spanned nearly fifty years of movie-making – from
Zulu
to
The Dark Knight
– and there aren’t many actors who have had ‘Happy Birthday’ sung huskily and Marilyn-like into their ear by both Carly Simon and Scarlett Johansson, twenty years apart.

Everyone gets lucky now and then, and I’ve had some lucky breaks. I’ve been lucky, too, with friends and agents and supporters who have all looked out for me. But if there’s one person I feel I owe for the way the last eighteen years have gone, it’s Jack Nicholson. In fact if it weren’t for him, I wouldn’t be writing this book now. I have Jack to thank for the resurrection of my movie career. I know he’s not everyone’s idea of a fairy godmother but he did it for me. I’ll explain how, later – but it could all have been so very different . . .

This is not a serious tome by a pompous old actor – above all, I’m an entertainer, so please feel free to laugh. I want to share the joy and the fun and the good fortune I have had with friends, to tell you about the things I’ve done and the places I’ve been and about how when I got there it was never the way I thought it would be. In many ways this is an innocent’s venture into the unknown, so I’m pleased you want to come along for the ride. To you and me – bon voyage.

When I finished my first autobiography
What’s It All About?
1992 seemed like a good place to stop. I had a great film career, a worldwide bestseller, some restaurants, a beautiful house and most importantly of all, a loving family. Christmas and New Year’s Eve 1991 had been spent in Aspen, Colorado, as guests of Marvin and Barbara Davis, the Texan oil billionaires and socialites. We stayed at the Little Nell Inn (which Marvin happened to own) and we were surrounded by friends including Lenny and Wendy Goldberg, Sean Connery and his wife Michelene and Sidney and Joanna Poitier.

It was a fabulous group to spend a holiday with. I don’t ski but I have really worked hard at developing my après ski skills and that is what Aspen is all about. As we sat around, enjoying the sunshine, gossiping about old times and eating fabulous food with this great group of people, I felt pretty happy with my lot. Everyone there had been part of my life since I first got to Hollywood – although in fact I’d met Sean in London back in the late fifties at what was then called a ‘bottle party’. If someone was giving a party in those days and couldn’t quite afford it, the invitation would be to ‘bring a bottle and a bird’. I was so broke that I couldn’t afford to bring a bottle, so I brought two birds. And they were both very beautiful girls. I walked into this party and there was Sean, who seemed enormous compared with the rest of us weedy actor types, and he saw me with those two girls and I became his instant new best friend. That period, back in the 1950s, was a tough time for me – perhaps the toughest I’ve ever known – and I was living hand to mouth through much of it, owing small sums of money to people all over London and often having to cross the road to avoid creditors. Of course, what I couldn’t have foreseen was that not so many years later, Shirley Maclaine would choose me to play opposite her in
Gambit
and give me a welcome to LA party, and in would walk Sidney Poitier. And that Sidney would become my instant new best friend.

Aspen with old friends was followed by a period back in Hollywood. I felt on top of the world. Things could only get better. I was completely oblivious to the downturn in store for me. My wife Shakira and I had bought a small house with a fantastic view, not on a Beverly Hill but in the more modest district of Trousdale. It was a holiday home, really – our main base was back in England – but we wanted to be close to our dear friend Swifty Lazar whose wife, Mary, was very sick.

Apart from Mary’s illness, there were no signs of impending doom. Nothing seemed to have changed. Our old friends were all in town. As with our New Year at Aspen, the dinner we had one night at Chasen’s restaurant in Hollywood with Frank and Barbara Sinatra, Greg and Veronique Peck and George and Jolene Schlatter, seemed to reflect all that was good in our lives. It was a great Hollywood evening, full of in-jokes including a prime one from George that seemed to sum up perfectly the relationship between actors and their agents. George is one of the great TV producers, the man who discovered Goldie Hawn in his fantastic show
Rowan and Martin’s Laugh-In
, and every bit as funny as the shows he’s produced. I’ve been lucky – my agents have always been close friends – but the relationship between stars and agents is usually quite distant socially. The joke goes, an actor gets a telephone call to say that his house has been burnt down and his wife raped. The actor rushes home and a police officer meets him outside and tells him that it is his agent who has come to the house, burnt it down and raped his wife. The actor’s jaw drops and he turns to the policeman and says, completely astonished, ‘My agent came to my
house
?’

In fact, that dinner at Chasen’s, and one the following week at Barbra Streisand’s (all Art Nouveau, and sensational Shaker furniture), were to be the last highs for quite some time. Looking back to this period I can see now what I couldn’t see then: the storm clouds, as they say, were gathering. A movie I had made the previous year,
Noises Off
, had come out and gone out just as quickly. I wasn’t too bothered. Everyone has a flop movie now and then, I thought. But it was another little sign.

I took no notice. I had become part of Hollywood history. Completely out of the blue, Robert Mitchum, the great 1950s movie star, asked me to present his Lifetime Achievement Award at the Golden Globes. I loved Bob Mitchum and was honoured that he should ask me, but I didn’t know him and had never worked with him and I was curious. ‘Did you pick me because I had heavy eyelids like you?’ I asked him. And he said, ‘Yes. You’re the only one, you know. People were always talking about my eyelids and then I saw you in
Alfie
and I thought to myself: this guy’s got heavy eyelids, too. They’re not as heavy as mine, of course, but they’re quite heavy. It’s all to do with the eyelids.’ A charming story – and Bob was a charming guy – but I began to wonder if it was really because everyone else turned him down.