Read The Emissary (Horse Women of the Zombie Apocalypse) Online

The Emissary (Horse Women of the Zombie Apocalypse) 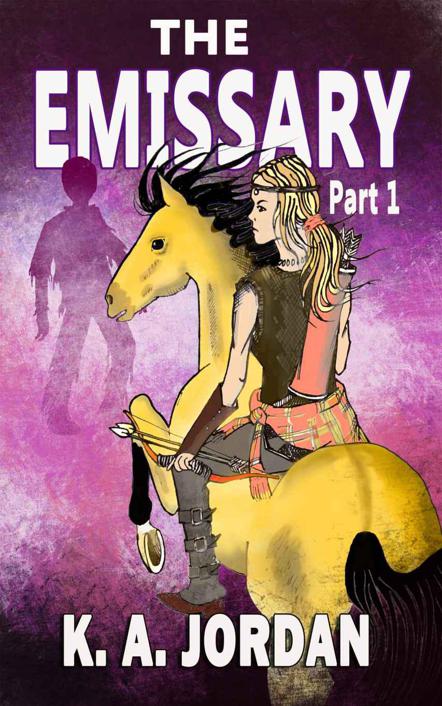 It's just three years since The End of the World. The McLeod and Davidson's clans survive in a world where the
muerto viviente
- walking dead - infest the cities and towns.

The McLeod clan knows how to use medicinal herbs. They offer to share the precious knowledge with the Davidson clan. Alexis McLeod is a trained herbalist, she volunteers to travel to Fort Chatten, the home of the Davidson clan. Her three younger sisters will go with her on the 110 mile journey.

Armed to the teeth, the sisters are horse archers, light cavalry, quick enough to avoid the muerto. Militia, marauders and mad-men abound, the stinking dead walk the land, eating everything in their path.

These characters are products of the author's imagination.

Any resemblance to actual people is entirely coincidental.

This e-book was licensed for your personal enjoyment only.

If you would like to share this e-book with another person, please purchase an additional copy for each person. If you're reading this e-book and did not purchase it, or it was not purchased for your exclusive use, then please return to the e-book store and purchase your own copy.

The meteor was discovered by a couple honeymooning at the Gulf of California, December 21st, 2012. The meteor was large, round, and light for its size. They brought it home to Mexico City and sold it to an amateur collector. It stayed in his rock collection for twenty years. When he died, his kids threw out the rock collection.

The meteor got stuck in the garbage truck mechanism and jammed it so thoroughly, three guys needed a sledgehammer to break it into pieces.

The next morning, all three men were dragged to the hospital, raving, biting, and foaming at the mouth. It was already too late for the human race.

The infected were called muerto viviente — undead or walking dead — shortened to 'muerto' when the disease spread to the rest of the world.

The infection disrupted food services first. The cities of the United States went up in flames due to food riots before they became cities of muerto.

In one summer, the infection took out 50 percent of the population of North America. When winter came, another 30 percent died from lack of electricity, clean water, and imported food.

The spring of year three of the New Dark Ages, on the edge of the Daniel Boone National Forest, two families communicated via ham radio. Clan McLeod offered to share their herb lore with clan Davidson. Twenty-year-old Alexis had the knowledge they planned to share, so along with eighteen-year-old Beth and their two younger sisters, Dani and Julie, offered to take the dangerous 110 mile trip to the Davidson compound. The battle-trained sisters were ready for an adventure.

Ken McLeod checked the weight of the panniers before handing them off to his dark-haired daughter, Julie. He watched her load the panniers onto the pack horse. Julie, only fourteen, was his youngest child, off on her first adventure. He checked all her weapons: the bow, her arrows, the semi-automatic pistol strapped to the pommel of her saddle, and the Winchester rifle strapped to her saddle bags.

He nodded his approval before he gave her a kiss farewell. Julie was the quiet one. She preferred the company of her pets to that of her rough-and-tumble sister Dani.

"I will," she said softly, smiling up at him. Her dark hair was neatly braided in pig-tails, and her hazel eyes flashed with excitement.

He walked over to where Dani had already loaded her pack horse. Her red-blond hair had already escaped the braid. She was eager to start, like a young race horse at the gate. He gave her weapons a cursory inspection.

"Listen to your sisters," he said. She laughed and threw her arms around him. "Don't go chasing after game when you're supposed to be on guard duty."

"I promise." Her brown eyes laughed at him. At sixteen, Dani was lean, light on her feet, and had a red-head's quick temper.

Ken walked over to Bethany. She was ready to go, giving the map a last look before they left. Tall, blond, and lean from a life in the saddle, Bethany looked older than eighteen. She was the fiercest fighter of the sisters, yet she had the habit of bringing home orphans and refugees. He counted on Beth to make friends every where she went.

"The clan needs allies," he said as he gave her a hug. "I'm counting on you to be our emissary."

"I will," Beth promised, smiling. "I also promise not to bring home too many strays."

"Your mother will appreciate that," he teased, kissing her forehead.

He turned to find Alexis watching them, a smile on her face. Blond and hazel-eyed like Beth, twenty-year-old Alexis was as eager to go as Dani. She'd had a crush on Tyler Davidson when she was a little younger than Julie. He worried, as father's do, that since the boy wasn't good enough for her, the man wouldn't be either. But she wasn't interested in any of the local boys. They were all from small farms. Tyler would inherit the Davidson fort and everything he could build from it.

Alexis had nursing experience. She was also an herbalist and top-notch organizer, just like Patricia, her mother, and her eldest sister, Abby. The hundred acre farm that was Dunvegan, only had room for one chatelaine. Matters were already strained between Abby and Alexis.

"I'm not going to say goodbye," he said as he hugged Alexis. "I'm going to count on you to come back in the fall."

"It isn't that far," she protested. "Three days is nothing."

"Look after your sisters," he said. "Bethany will bring home more refugees than our community can absorb."

Alexis laughed, but when she looked up at him, her smile faded.

"Take care of everyone," she said. "I'll miss you all terribly."

"Don't let that boy send you home knocked up." Ken drew himself to his full six-two. "I'd have to ride to Fort Chatten to kill him."

"Mind yourself," he growled.

He looked at the girls and their horses.

"Mount up!" he called to his daughters, then waved to his son-in-law standing at the wooden gate. "Open the gate!"

The girls swung into their saddles. The sound of hooves echoed against the stone walls as they turned their horses toward the gate.

Julie's young pack horse threw up her head, neighing shrilly to the horses in the stable. Ken frowned. The other pack horse had been lent out. Julie would have her hands full with that one. She snapped the lead rope, and the filly fell into step with Julie's saddle horse.

Ken nodded, satisfied Julie could handle it. He'd taught his daughters well. They were a small cavalry, unleashed on a world in ruins. His daughters had the skills and drive to reshape the world to suit themselves.

Not even an army of undead would stand against them.

The four young women had been riding all day, dressed in leather chaps, knee-high boots and leather vests. The sisters ranged in age from early twenties to early teens. The two oldest had sun-bleached dark blond hair, one was a red-head, and the youngest had dark hair. They had tied their hair back with leather strips and tied bright yellow tartan scarves around their waists. Each woman was armed with a short bow, a pistol, a long knife and a rifle. The afternoon sun was warm, and the girls were sweaty, as were their four riding horses and two pack horses.

The compact horses were various shades of buckskin and dun. They had gold to cream bodies, striped legs, and black manes, tails, and stockings. Two had white body markings. The horses' cannon bones were strong, chests deep, rumps round with long, low-set tails. Their large dark eyes watched, small ears flickered, alert for any sound or movement.

Decked out in western saddles, breast collars and bridles, their gear had no flashy decorations to reflect light. The saddles were hung with weapons, water bottles, saddle bags and bedrolls. The two pack horses were loaded with panniers and packs.

The group traveled a dirt track parallel to a paved road. The road side hadn't been mowed in years, but cattle had grazed there, so the weeds weren't high. To the left was thick brush that eventually became woods.

The lead mare lifted her head and snorted a warning. Her rider, Bethany McLeod, raised her hand to signal the others to stop.

"Mist has something?" Alexis, the eldest, asked as her horse came abreast.

"Scout's got it, too." Dani looked at her horse. His head was up, ears trained in the same direction.

"What is it?" Julie whispered.

"Guns or bows?" Alexis asked Beth. Alexis's horse's ears scanned like radar for movement in the brush around them. When the horse heard something, both his ears stopped moving.

Alexis nodded and dropped back to take rear guard.

"I hope it's not a pack of
them.
" Both Julie and her horse were wide-eyed and nervous.

'Them' meant the muerto. Mindless, bloodless creatures that had once been human, they aimlessly roamed the countryside feasting on living flesh.

Beth signaled Mist to walk on. Mist stepped out at a lively pace the other horses had to hustle to match. Mist was concerned with something hidden in the brush on the left. She kept one ear trained on it while the other ear scanned for sounds ahead or behind.

"Toby, quit!" Julie swore at her horse. "Do either of you see anything?"

"Patch acts like it's dangerous." Alexis patted her horse to calm him.

Beth glanced back. Patch's head was to his chest, ears back, nose scrunched up, showing teeth. He chewed his bit and green froth dripped down his chest. Anything that got too close would get kicked or bitten.

When the brush closed in, the sisters heard loud breathing and low moans. Beth checked the trail ahead. There was open space to the right, an intersection.