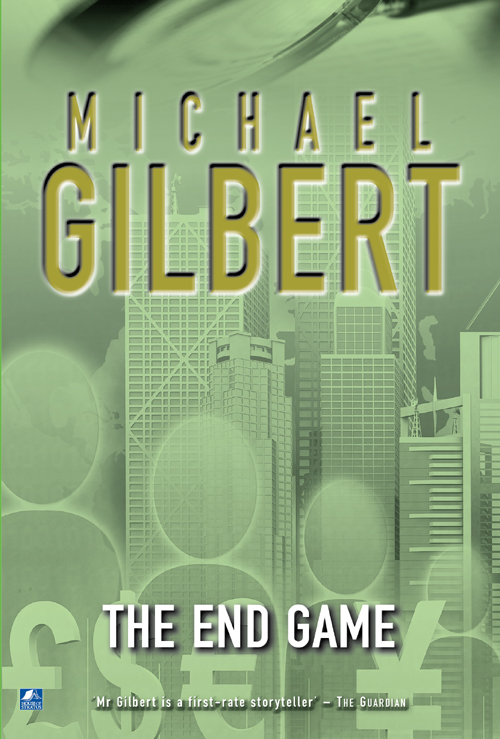 HRF Keating stated that
‘Smallbone Deceased’
was amongst the 100 best crime and mystery books ever published.
“The plot,”
wrote Keating, “
is in every way as good as those of Agatha Christie at her best: as neatly dovetailed, as inherently complex yet retaining a decent credibility, and as full of cunningly-suggested red herrings.”
It featured Chief Inspector Hazlerigg, who went on to appear in later novels and short stories, and another series was built around Patrick Petrella, a London based police constable (later promoted) who was fluent in four languages and had a love for both poetry and fine wine. Other memorable characters around which Gilbert built stories included Calder and Behrens. They are elderly but quite amiable agents, who are nonetheless ruthless and prepared to take on tasks too much at the dirty end of the business for their younger colleagues. They are brought out of retirement periodically upon receiving a bank statement containing a code.

Much of Michael Gilbert’s writing was done on the train as he travelled from home to his office in London:
“I always take a latish train to work,” he explained in 1980, “and, of course, I go first class. I have no trouble in writing because I prepare a thorough synopsis beforehand.”.
After retirement from the law, however, he nevertheless continued and also reviewed for
‘The Daily Telegraph’
, as well as editing
‘The Oxford Book of Legal Anecdotes’
.

The police car slid quietly down the long, empty street. The widely-spaced lighting left pools of blackness midway between the overhead standards.

“More cheerful by daylight,” agreed Detective Constable Wrangle. He was driving the car.

The roadway was enclosed on both sides by a wooden wall made of ten-foot planks set vertically in the ground and held together by rows of metal strip. The bottom of the fence was buried in a thick belt of marram grass. Alder and thorn, the trees that grow quickest when men depart, had pushed their shoots through the cracks and were already tall enough to top the wall.

“Long as I can remember,” said Wrangle. “Must be more’n six years since they shut the East Docks.”

“What used to be there?”

“Offices and sheds. Marine stores, ship repairers, bonded warehouses, places like that. When the ships stopped coming here, they got no customers so they all cleared out.”

“I remember it how it used to be in the old days,” said Brannigan. “When I was a kid, we lived over on Porthead Road. I remember when the docks was crowded with ships. Albion, Canada, Russia, Quebec, Princess – busy all day long, and most of the night, too, you could see the loading going on. Nothing at all, now.”

“Bloody shame,” agreed Wrangle. He wondered if this was a moment when he could offer the Sergeant a cigarette. He hadn’t known him long enough to be sure. The Sergeant was a recent arrival in the Division and was reputed to be hot on discipline.

“Bloody mismanagement,” said Brannigan. “Crowd of bloody old women. Think of nothing but their own pockets.” He kicked the planking thoughtfully. “You ever been inside?”

“Once or twice. Few years ago the Friary Lane crowd started using one of the empty sheds as a store for stuff they’d nicked from the goods yard at Malvern Steps. We got a tip-off and raided the place. Caught them with their pants down.” He grinned. “Once you’re in, there’s no way out, see.”

“Plenty of ways out on the other side, surely? I remember the kids used to get in and out like rabbits.”

“You’d have to be a very small rabbit to do it now,” said Wrangle. “They’ve put up a twelve-foot fence on three sides. Diamond mesh. Not big enough to get your toe in. You’d get over it with a grapnel and a rope easy enough, but not if you was in a hurry.”

“So you nicked the lot?”

“That’s right. They got a handful each. They’d just about be out by now. Not that they give us a lot of trouble here. There’s nothing to attract them.”

“Then why do they bother about that?” said Brannigan. He pointed to a notice on the wall which said, “Warning. This place is patrolled by Guard Dogs. Keep out.”

“That’s a load of cock. They did have a dog in there once. Soon after they shut it down, that was. It disappeared.”

Brannigan climbed back into the car. He said, “Go on. You tell me. I suppose the rats ate it.”

“The rats or the toe-rags. They got some way of getting in and they sleep in the sheds. In the summer, that is.”

In the shadows ahead something had moved. Wrangle flicked on the spotlight.

“Like I said,” said Wrangle. “One of our hotel’s five-star customers.”

The tramp, pinned against the wall by the blade of light, had thrown up an arm to protect his eyes. He was skeleton-thin, fragile enough to be blown away by the first puff of wind.

“Let’s have a look at you,” said Brannigan. He climbed out of the car. The tramp slowly lowered his arm.

“One of our regulars.”

Brannigan checked for a moment. It was the voice that stopped him. The voice and intonation of an educated man. Then he said, “You’ve got no right to be hanging round at this time of night. I’ve a good mind to run you in.”

“You can’t do that,” said the tramp. “I have the wherewithal for a night’s lodgings.”

He held out one hand, palm upwards, with a shining fifty-pence piece in it.

Brannigan knocked his hand up, and the coin went spinning into the gutter. The tramp dropped on his knees, whining like a child, and clutched at it before it disappeared down the grating. Then he got to his feet, swaying slightly.

He stretched out his big hands, caught the tramp by the lapels of his coat and lifted him. He weighed no more than a child. He held him for a moment, his face a few inches from his own. He could see the tears of weakness and fury trickling down the caved-in cheeks.

“I’m a citizen,” said the tramp. “I’ve the right of every citizen to be treated fairly.”

Brannigan put him down on the pavement with a thump, turned about and climbed back into the car.

“Only when he’s lit,” said Wrangle.

“Hopped to the eyebrows.”

“Where the hell would a man like that get the money to buy dope?”

“I expect there’s money in the family,” said Wrangle. “Must have been. You can see he’s been educated.”

As the car moved off he looked back. The tramp had sunk back into the shadows and become part of them.

“It’s funny to think,” said Wrangle, who was feeling philosophical, “that when Percy was a kid his old man sends him to Eton and Harrow and all that caper and thinks, one day my son may be prime minister.”

“It’s mothers think about their daughters that way now,” said Brannigan sourly. He was a male radical.

For a full five minutes after the car had gone, the tramp stayed still, like an animal that has been frightened. When he moved he kept close to the fence. As he walked his lips were working. He seemed to be counting. Two lamp standards and six paces later he stopped again.

At this point, a plane tree on the far side of the paling had grown to such a height that it was already well clear of the top. Its strong roots, growing outwards, had undermined the footing of that particular plank and had worked it loose. Over the years, the parasites which feed on wood had followed the roots down and completed the job. The plank looked secure enough, but in fact it was held in position only by the three lines of metal strip. The first and the third lines had been carefully severed, so that when the tramp pressed on the bottom of the plank it swung inwards, pivoting on the centre strip. The tramp went down on to hands and knees and wriggled through without difficulty, pushing the plank back into position behind him.

Read My Lips by Herbenick, Debby, Schick, Vanessa
Jessica Meigs - The Becoming by Brothers in Arms
The Four Books by Yan Lianke
Before I Say Good-Bye by Mary Higgins Clark
Money in the Bank by P G Wodehouse
Young Thongor by Adrian Cole, Lin Carter
Pirate's Price by Aubrey Ross
Bright Lights, Big Ass: A Self-Indulgent, Surly, Ex-Sorority Girl's Guide to Why It Often Sucks in the City, or Who Are These Idiots and Why Do They All Live Next Door to Me? by Jen Lancaster
Dark Hunger (A Nick Teffinger Thriller / Read in Any Order) by Jagger, R.J., Rain, Jack
Where The Devil Won't Go: A Lucas Peyroux Novel by E.J. Findorff