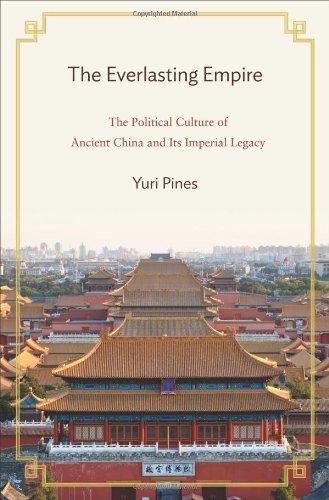 This book has been composed in Garamond Pro
Printed on acid-free paper. ∞

THIS BOOK IS WRITTEN as homage to two eminent scholars. First is my teacher, Professor Liu Zehua

of the Nankai University, Tianjin, whose remarkable ability to combine meticulous study of specific texts, periods, and personalities with bold generalizations and highly original analysis of Chinese political culture throughout the centuries serves as a source of constant inspiration for me. Second is the late Professor Shmuel Noah Eisenstadt, in whose workshops I was privileged to participate in the early 2000s, and who encouraged me to contextualize Chinese history and Chinese political culture in broader global patterns and to think in terms of comparative history. It is to these two great teachers that my book is dedicated.

In preparing this book I have benefited tremendously from the advice of my friends and colleagues: Zvi Ben-Dor, Michal Biran (whose illuminating remarks on nomadic political culture proved exceptionally invaluable), Elizabeth Perry, and Yitzhak Shichor. Paul Goldin and another reviewer for Princeton University Press contributed greatly toward the manuscript’s improvement. I am deeply grateful to these scholars—and to many other colleagues whose advice on particular questions I sought and whose studies I have consulted. Naturally, I remain singularly responsible for any possible inaccuracies and imprecise interpretations of secondary research. I am grateful to Yitzchak Jaffe for preparing the map.

I am grateful to Rob Tempio of Princeton University Press for his constant encouragement; to the Institute for Advanced Study, Princeton, where the exceptionally stimulating intellectual atmosphere strengthened my determination to undertake this project back in 2006, and to my wife, Wang Yu, and my friends, who tolerated my partial default on social obligations during the years of writing and revisions.

This research was supported by the Israel Science Foundation (grant no. 1217/07) and by the Michael William Lipson Chair in Chinese Studies.

Stability is in unity.

WESTERN OBSERVERS seem always to have been fascinated with the durability of the Chinese political system. While attitudes toward the Chinese political model changed dramatically over the centuries, reflecting shifts and turns in Europe’s political and intellectual history—from the Jesuits’ admiration of China’s stability to Hegel’s derision of its stagnation, from Voltaire’s praise of it as an exemplary enlightened monarchy to Karl Wittfogel’s detestation of its “Oriental despotism”—interest in the Chinese empire’s exceptional longevity persisted.
1
In turn it led Western scholars to investigate numerous aspects of Chinese political thought, values, and modes of sociopolitical behavior—what today may be called “political culture.” While in the course of the twentieth century interest in the Chinese imperial model and in China’s political culture diminished among nonspecialists, it remained intense among scholars of China who searched in the imperial past for explanations of China’s turbulent present. Particularly during Mao Zedong’s years in power (1949–1976) and in their immediate aftermath, scholars repeatedly debated the cultural roots of the vicissitudes of Chinese history, investigating imperial patterns of autocracy, dissent, submission, and rebellion and their impact on China’s present.
2

In recent decades this interest in Chinese political culture among Western students of China has gradually subsided. Many factors have contributed to this: emerging scholarly uneasiness with sweeping generalizations that all too often served hidden or overt political agendas; “decentering” shifts in the historiography that redirected scholarly gaze from the center to the periphery and from the rulers to the ruled; and, arguably, the seemingly dull and predictable state of contemporary Chinese politics, which makes the field of political studies of current—and, mutatis mutandis, premodern—China much less attractive than it was during Mao’s twists and turns.
3
Yet curiously, just when Chinese politics became less “exciting” and Western scholars lost their interest in Chinese political culture, this topic gained unprecedented prominence in China’s indigenous scholarship. Prompted by the need to reassess the traditional sources of manifold malpractices of Mao’s (and not only Mao’s) era, and encouraged by

relative relaxation of academic control, Chinese scholars produced dozens of monographs and thousands of articles on various topics concerning traditional Chinese political ideologies, values, and practices and their modern impact. Few are the topics on which the divergence of interests between Chinese and Western scholars is so marked.

My interest in Chinese political culture had been aroused since my first encounter with the leading Chinese scholar in the field, Liu Zehua, under whose guidance I studied in the 1990s, at Nankai University, Tianjin. It was there that I first began contemplating the need to address anew the political miracle of the Chinese empire—one of the largest political entities worldwide, which endured against all odds for more than two millennia. Unlike my Chinese teachers and colleagues, I was attracted to Chinese political culture primarily not because of its impact on China’s current political experience, but as an explanatory framework for the empire’s unparalleled durability. I believe that now, as ideological battles in which the Chinese empire served as a model or a foil for the Occident have long ended, the time is ripe to address its history anew, and try to understand how its architects and custodians were able to establish the longest continuous polity in human history.

The Chinese empire was established in 221 BCE, when the state of Qin unified the Chinese world after centuries of intensive interstate warfare. The nascent empire was then roughly contemporary with the Maurya Empire in India and with the Hellenistic and Roman empires in the Mediterranean area. The Chinese empire ended with the proclamation of the Republic in 1912 CE, almost simultaneously with the final collapse of three major empires in the West: the Ottoman, the Habsburg, and the Romanov. Between these termini, for 2,132 years, China underwent tremendous changes in demography and topography, in ethnic composition of the ruling elites and socioeconomic structure, in religion and means of artistic expression. It encountered—like any other comparable polity worldwide—periods of internal wars and foreign incursions, alien occupations, and devastating rebellions; not a few times the very survival of Chinese civilization looked precarious. Yet upheavals and transformations notwithstanding, we may discern striking continuities in institutional, sociopolitical, and cultural spheres throughout the imperial millennia. The monarchic political system; the powerful bureaucracy; the strongly pronounced social hierarchy, usually coupled with considerable social mobility; the extended family system; the uniform written language and continuous educational curriculum—all these features remained valid both under unifying dynasties and under regional regimes during the ages of fragmentation, under native and under alien rule. Moreover, underlying these common features were fundamental ideas and values, which shaped the imperial polity. The emperor should be omnipotent and

his rule should be universal; the bureaucracy should be staffed by men of proven talent and merit; and the commoners deserve utmost concern but should remain outside policy making. These ideas guided political actors in China from the beginning to the end of the imperial enterprise, from the Qin dynasty (221–207 BCE) to the Qing (1644–1911).

This study explores the ways in which the Chinese imperial system attained its unparalleled endurance. In this exploration, I outright reject the once-popular environmental deterministic approach, such as that advocated by Wittfogel, or the idea that the empire’s success reflected some perennial Chinese “national character.”
4
And I do not pretend to provide a comprehensive answer, which would have to take into consideration a variety of geographic, economic, military, religious, and cultural factors, the detailed analysis of which goes beyond the scope of the present study (more on this below). Rather, I shall focus on a single variable, which distinguishes Chinese imperial experience from that of other comparable polities elsewhere, namely, the empire’s exceptional ideological prowess. As I hope to demonstrate, the Chinese empire was an extraordinarily powerful ideological construct, the appeal of which to a variety of political actors enabled its survival even during periods of severe military, economic, and administrative malfunctioning. Put in other words, the peculiar historical traj ectory of the Chinese empire is not its indestructibility—it witnessed several spectacular collapses—but rather its repeated resurrection in more or less the same territory and with a functional structure similar to that of the preturmoil period. This resurrection, in turn, was not incidental: it reflected the conscious efforts of major players to restore what they considered normal and normative way of sociopolitical conduct—the imperial order.

The peculiarity of China’s historical trajectory starts in its preimperial age. In contrast with other imperial polities, the Chinese empire came into existence after a lengthy period of ideological preparation and preplanning. Centuries of internal turmoil that preceded the imperial unification of 221 BCE, and which are known ominously as the age of “Warring States” (453–221 BCE), were also the most vibrant period in China’s intellectual history. Bewildered by the exacerbating crisis, thinkers of that age sought ways to restore peace and stability. Their practical recommendations varied tremendously; but amid this immense variety there were some points of consensus. Most importantly, thinkers of distinct ideological inclinations unanimously accepted political unification of the entire known civilized world—“All-under-Heaven”—as the only feasible means to put an end to perennial war; and they also agreed that the entire subcelestial realm should be governed by a single omnipotent monarch.
5
These premises of unity and monarchism became the ideological foundation of the future empire, and they were not questioned for millennia to