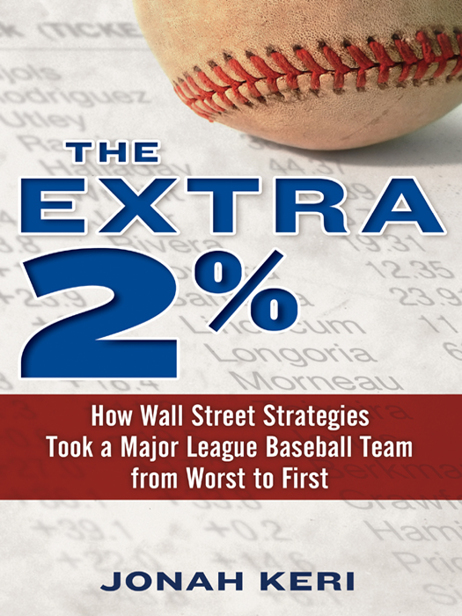 For Ellis, Thalia, and the esteemed Dr. F

When I bought the Dallas Mavericks in 2000, they were coming off one of the worst stretches in NBA history. In the twenty years leading up to that point, the Mavs had won just 40 percent of their games. We had work to do.

One of the first steps we took was to invest in the product. Sure, that meant paying more for player talent than most other teams. But we made our investments count in many other ways too. We spared no expense on player facilities, even in the visiting locker room. Players notice these things. Every time another team rolls into town, every player can see what we’ve built, talk to our guys, and file that knowledge away for the future. To refine players’ skills, we also hired the biggest coaching staff in the league. That way, when a big man needs extra work in the post or a point guard needs to work on his ballhandling, we’ve got specialized instructors who can take them aside and help develop their skills.

Having spent my whole career building technology companies, I was eager to bring that experience to bear with the Mavs. We’ve hired some of the brightest minds in basketball analysis and built a database that tracks everything from player personnel to game strategies. Wayne Winston, a professor at my alma mater, Indiana University, developed a proprietary measure that allows us to gauge the impact each player has on the court, beyond the usual box-score stats. More than just developing our own metrics, we’ve also
learned a lot about how best to use them. While many teams use stats primarily as a player acquisition tool, we bring our analysts and coaches together. One of our top analysts, Roland Beech, travels to every game, working closely with our coaching staff on everything from lineups to set plays. Critically, everyone in the organization—from our best number crunchers to our most experienced coaches—buys into the system.

In the ten years since I bought the Mavs, we’ve won 69 percent of our regular-season games and made the playoffs every season. Players like Dirk Nowitzki deserve the lion’s share of the credit for that progression—Dirk has evolved into a true NBA superstar, with other homegrown players developing alongside him or serving as valuable trade chips. But pure talent is never enough. Everything that we do revolves around the idea of finding that little edge, something that can transform our team from good to very good, and from very good to great.

One Major League Baseball team follows that same philosophy better than any other: the Tampa Bay Rays. When Stuart Sternberg turned over day-to-day control of the team to Matt Silverman and Andrew Friedman, he knew he was trusting his investment to two guys with limited baseball experience. But Sternberg felt that smarter thinking could trump their lack of experience. Silverman and Friedman had shown their potential while working on Wall Street. They could think about baseball in a different way, churning out ideas that their competitors had never seen or tried before. Like the Mavs, the Rays reached out to some of the sharpest analytical minds in the baseball world, bringing them into the fold. In Joe Maddon, they found a manager who wasn’t merely accepting of new ideas—he thrived on them.

I see a lot of myself in Sternberg, Silverman, and Friedman. They have accomplished so much in such a short amount of time, turning a perennial loser into one of the top teams in baseball and growing the Rays into one of the model franchises in all of professional sports. Yet no matter what they do in the future, whether it’s land a more lucrative TV deal, build a new ballpark, even win a
World Series, they’ll always trail well behind the Yankees and Red Sox in terms of revenue streams, market size, and national cachet. Despite that reality, they embrace that challenge every day and continue to prove themselves on and off the field. Like me, they’re always looking for new, subtle ways to beat the competition.

The Tampa Bay Rays are a shining example to anyone, whether you’re running a professional sports franchise or a Fortune 500 company or a neighborhood gas station. Every day they look up and see the two biggest names in their industry, standing right on their turf. So they dream up new ideas, whether it’s to find a new relief pitcher, improve their brand, or build their profit margin. No one idea is likely to make a huge difference. But collectively, those ideas make the difference between winning and losing, or between winning a little and winning a lot. Those ideas, working together, result in that little edge the Rays are constantly looking for—that
all
the best operators are constantly looking for.

No matter what kind of business you’re trying to run, you should read this book. Then you too can understand what the extra 2% is all about.

I used to tell people I played for the Devil Rays and they’d ask, “Who are the Devil Rays?” Now, I think they know who we are
.
—B. J. U
PTON

On the first day of spring training in February 2008, Scott Kazmir scanned his team’s clubhouse, then swiveled his head back toward a pack of waiting reporters. The assembled media members wanted to know what the young pitching ace thought was possible for the coming season. Really, they wanted their first sound bite of the year. Kazmir was happy to oblige.

There is no more optimistic moment in all of sports than the first day of spring training. Refreshed after a long off-season, young men descend on sprawling complexes in Florida and Arizona to catch up with old friends and make new ones. The sun beams down on freshly mown grass. Players slip into freshly laundered uniforms, feel the familiar pinch of their trusty spikes. The gate swings open, and seventy-five pairs of fresh legs saunter onto the field. At that moment, anything is possible. In spring training, every team is undefeated.

In that vein, Kazmir’s prediction was typical. The flame-throwing left-hander had been hugely successful from the time he first stepped onto a Little League diamond. At twenty-four years old, he was a first-round draft pick who’d already matured into an elite major league talent, an All-Star, the ace of a major league pitching staff, the booty in what was considered one of the most one-sided baseball trades of the decade. Young, talented, handsome, and marketable, he was a few months from signing a contract big enough to leave him set for life. If any baseball player was going to be full of preseason bravado, Kazmir seemed a reasonable choice.

That is, until you remembered his employers.

For ten years, the team known as the Tampa Bay Devil Rays had plumbed the depths of Major League Baseball, averaging 97 losses a season. They finished last 9 out of 10 times. When they finished fourth in 2004 with a 70-91 record—the only time they’d reached 70 wins—it was viewed as a moral victory.

The D-Rays traded one of their best players to acquire a manager who left after three losing seasons. They attracted attention only after throwing tens of millions of dollars at washed-up former stars. Their owner alienated fans, local media, and local businesses. The Devil Rays were so reviled by players that when Torii Hunter, universally regarded as one of the nicest guys in baseball, was asked about the lucrative contract he’d signed with the Los Angeles Angels of Anaheim, he threw in a surprise non sequitur.

“I don’t care how much money you give me, I’m not going to sign someplace that I don’t like,” said Hunter. “I wouldn’t sign with the Tampa Bay Devil Rays.”

Hey, at least that was better than Hunter’s proclamation a few years earlier. Appearing on
The Best Damn Sports Show
, Hunter was asked if he’d rather take a Randy Johnson fastball to the head or play for Tampa Bay. He picked the beanball: “If he hits me, it’s over with,” Hunter quipped. “But if you play for the Devil Rays, you’re stuck.”

In a 2003 episode of the
Late Show with David Letterman
, Roger
Clemens read from the list of the “Top 10 Things Baseball Has Taught Me.” Checking in at number four: “The best practical joke? Tell a teammate they’re traded to the Devil Rays.”

That long history of losing formed the backdrop for Kazmir’s playoff prediction. The response to his forecast, then, was predictable.