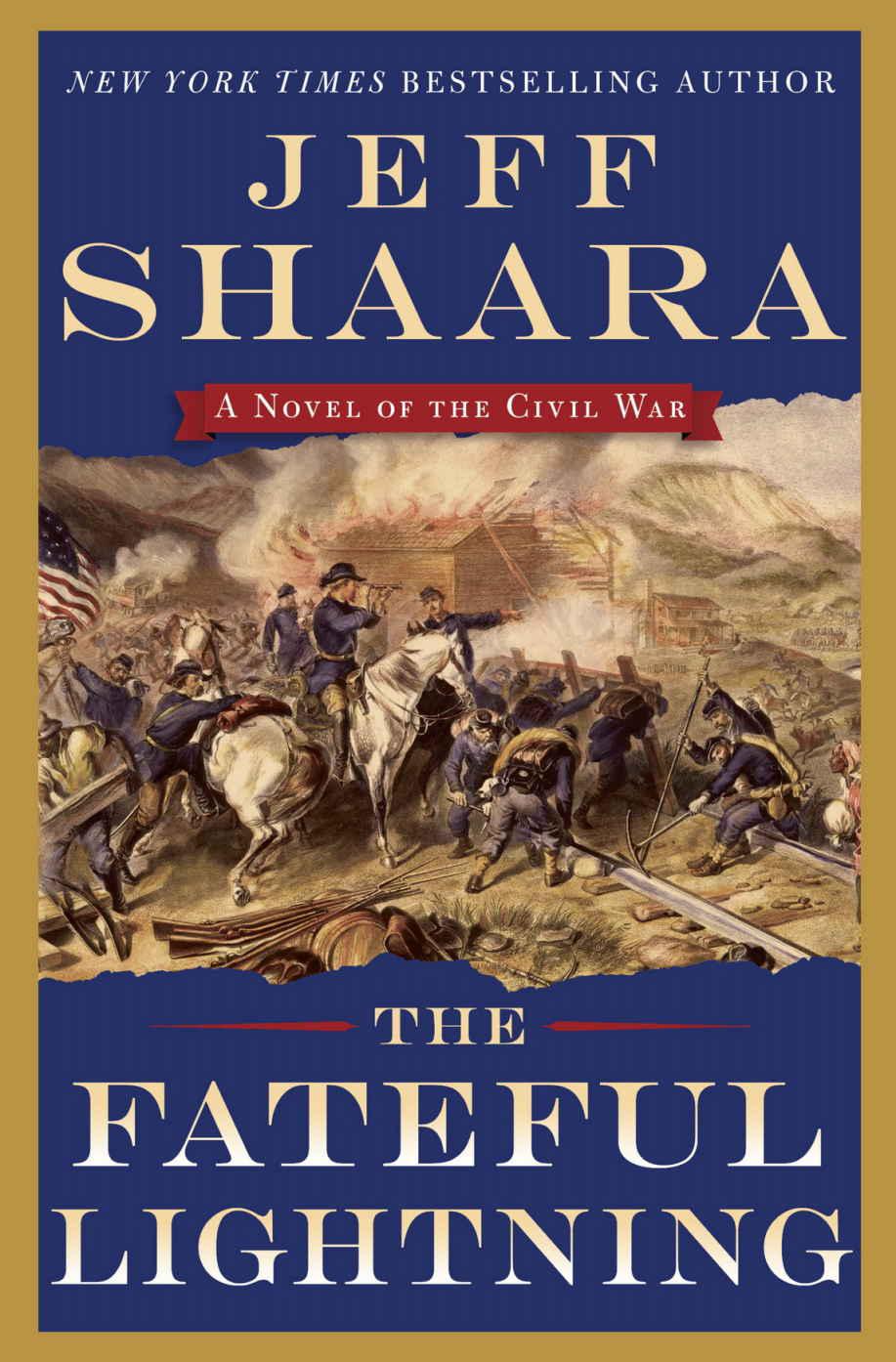 The Fateful Lightning
is a work of historical fiction, using well-known historical and public figures. All incidents and dialogue are products of the author’s imagination and are not to be construed as real. Where real-life historical or public figures appear, the situations, incidents, and dialogues concerning those persons are entirely fictional and are not intended to change the entirely fictional nature of the work. In all other respects, any resemblance to persons living or dead is entirely coincidental.

Published in the United States by Ballantine Books, an imprint of Random House, a division of Penguin Random House LLC, New York.

B
ALLANTINE
and the H
OUSE
colophon are registered trademarks of Penguin Random House LLC.

The fateful lightning : a novel of the Civil War / Jeff Shaara.

This is the fourth and final volume of a series that tells the story of the Civil War in the “west.” The first three, dealing with Shiloh, Vicksburg, and Chattanooga, featured a cast of characters that varied according to the significance of those men (and in one case, woman) and their roles in the story. In all three books, the one consistent character is Federal general William T. Sherman. Here Sherman becomes even more of a primary figure, as this story covers the campaigns from November 1864 through the end of the war in North Carolina, in late April 1865. Much of the book covers what we know today as “Sherman’s March to the Sea,” across north and central Georgia. But there is much more to this story.

In every book I’ve written, I agonize over just where the story should begin. Inevitably, the question arises, from letters and emails I receive, of why I did not include certain events or certain specific people. This book will be no exception.

This is not a history book. I never make any attempt to include the entire history of any campaign or battle, or to include every major historical figure. That is the job of the historian. My primary objective is to find what I hope is the best story I can tell, and by doing so, to bring the history to life. This is a novel. But the characters are real, the accounts based on as many original source materials as I could find, including the work of a great many historians who have dug far
more deeply into these characters than I can. In addition, I depend on those readers who offer up pieces of their own family history, often including diaries, collections of letters, or memoirs that have never been published and thus have never seen the light of day. The extraordinary value of all of these resources creates the acknowledgments section of this book, found at the end.

The choice to begin this story in November 1864 was a challenging one. My last book, the third volume in this series (
The Smoke at Dawn
), dealt with the Chattanooga campaign of late 1863. What happens immediately afterward, continuing through the summer of 1864, most notably the vicious struggles around the city of Atlanta, is a book all its own. Though I make frequent reference to that campaign and to the campaigns that follow in central Tennessee (specifically the battles of Franklin and Nashville), this story begins with Sherman’s march away from Atlanta, and features four principal voices and their experiences through the final six months of the war. To those who feel I have ignored or overlooked the significance of the events I have left out, I apologize. But I am restricted often by my publisher, who in this case was rather insistent that I not attempt to tackle six or seven books on this particular part of the war (or write one gigantic book that would make Harry Potter pale in comparison).

So, I’m hoping you will accept this book as my attempt to bring you the final chapter of the war, a chapter that to many is virtually unknown, especially compared to the more familiar stories of Robert E. Lee and Ulysses Grant in Virginia.

This story focuses on four primary points of view. One is Sherman, certainly. Two others are his adversaries General William Hardee and the young cavalryman Captain James Seeley, both of whom were introduced in the first volume (
A Blaze of Glory
) at Shiloh. Alongside these three soldiers comes a civilian, a very different kind of voice. He is a slave who discovers that, as Sherman’s army makes its way through Georgia, the bullwhips and tracking hounds of his master have suddenly disappeared. Thus he joins an extraordinary parade, tens of thousands of men, women, and children who escape their bondage and follow along with Sherman’s troops. I hope that the character of a man named Franklin offers you a perspective on this horrific time in our history that few have explored.

Regardless of your feelings about General Sherman (and I’ve heard a great deal about that), I hope you will find this to be what I intended: an engaging and entertaining story about a part of the Civil War that is often overlooked. As always, the history is as accurate as I can make it, and the interpretation of the personalities of these characters, along with their day-to-day dialogue, is my own.

This was a wonderful book to write. I hope you feel it is worth reading.

Dead is Better by Jo Perry
Love According To Lily by Julianne Maclean
How Beauty Saved the Beast (Tales of the Underlight) by Garren, Jax
Highlander Betrayed (Guardians of the Targe) by Wittig, Laurin
To Steal a Prince by Caraway, Cora
Greece, the Hidden Centuries: Turkish Rule From the Fall of Constantinople to Greek Independence by David Brewer
Lone Rider by B.J. Daniels
Destination: Void: Prequel to the Pandora Sequence by Frank Herbert
Emergence (Awakening Series Book 2) by Hayes, Olivia
The Thorne Maze by Karen Harper