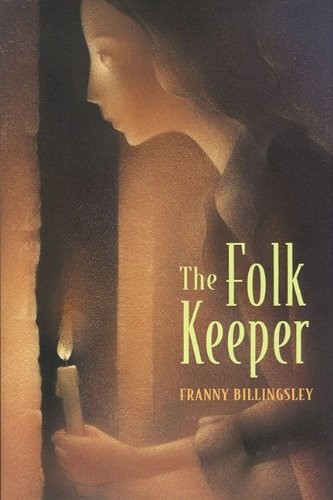 Annotation
She is never cold, she always knows exactly what time it is, and her hair grows two inches while she sleeps. Fifteen-year-old Corinna Stonewall--the only Folk Keeper in the city of Rhysbridge — sits hour after hour with the Folk in the dark, chilly cellar, "drawing off their anger as a lightning rod draws off lightning." The Folk are the fierce, wet-mouthed, cave-dwelling gremlins who sour milk, rot cabbage, and make farm animals sick. Still, they are no match for the steely, hard-hearted, vengeful orphan Corinna who prides herself in her job of feeding, distracting, and otherwise pacifying these furious, ravenous creatures. The Folk Keeper has power and independence, and that's the way she likes it.
Franny Billingsley
The Folk Keeper
To my daughter Miranda, who found me the book that got me into the caves, and to my editor Jean Karl, who showed me the way back out.
Many thanks to all my readers, whose generous criticism helped me make this the best book I possibly could.
To the members of my wonderful writing group, who read an excruciating number of drafts: Esther Hershenhorn, Phyllis Mandler, Harriette Gillem Robinet, Myra Sanderman, and Linda Schwab.
Also to Julie Billingsley, Pat Billingsley, Ruth Billingsley, Toni Buzzeo, Julia Halpern, Suzanne Lewis, Dian Curtis Regan, and Natalie S. Wainwright. Belated thanks to Natalie for the gift of the title
Well Wished.
1

From
Candlemas
to the
Feast of Saint Lancet
February 2 — Candlemas
It is a day of yellow fog, and the Folk are hungry. They ate the lamb I brought them, picking the bones clean and leaving them outside the Folk Door.
The lamb was meant for Matron’s Sunday supper. She’ll know I took it, but she will not dare say anything. She can keep her tapestries and silks and Sunday dinners. Here in the Cellar, I control the Folk. Here, I’m queen of the world.

February 4 — Feast of Saint Lancet
I won’t go, not upstairs, not yet.
A Great Lady has sent for me, says Matron, but what do I care for that? No one will fetch me from the Cellar. They’re all too afraid of the Folk.
So I delight in slowly turning the crisp pages of my new Folk Record. I delight in very slowly recording the activities of the Folk. I will keep the Great Lady waiting as long as I please. The Folk have consumed:
One bucket of milk, with plenty of cream
One barrel of salt pork.
They’ve worked no mischief for months. The hens go on peacefully laying, the tomatoes happily growing. I wager I’m the only Folk Keeper in the city of Rhysbridge — in all of the Mainland, for that matter — who sits with the Folk for hour upon hour in the dark, drawing off their anger as a lightning rod draws off lightning. I am like the lightning, too; I am never injured. I know how to protect myself.
With every word, I keep the Great Lady waiting. Now she’ll never want to take me from my Cellar. This is where I belong, me, Corinna Stonewall, on the chilly floor, keeping my Record by flickering candlelight. This is my only home — these stone walls, the Folk Door, the Folk in the Caverns beyond.
The Great Lady is now pacing the floor perhaps, asking Matron,
Where is Corin, Corin Stonewall?
Corin, indeed! They don’t know my secrets.

Mr. Paradise A Novel by Elmore Leonard
Wings of Shadow (The Underground Trilogy) by Anna Kyss
Dreaming Of Your Love (Hollywood Legends #3) by Mary J. Williams
Food, Girls, and Other Things I Can't Have by Allen Zadoff
A Man She Couldn&rsquo;t Forget by Kathryn Shay
When the War Is Over by Stephen Becker
Free Pass (Free Will Book 1) by Kincheloe, Allie
M or F? by Lisa Papademetriou
The Moor's Last Sigh by Salman Rushdie
Texas Sunrise by Fern Michaels