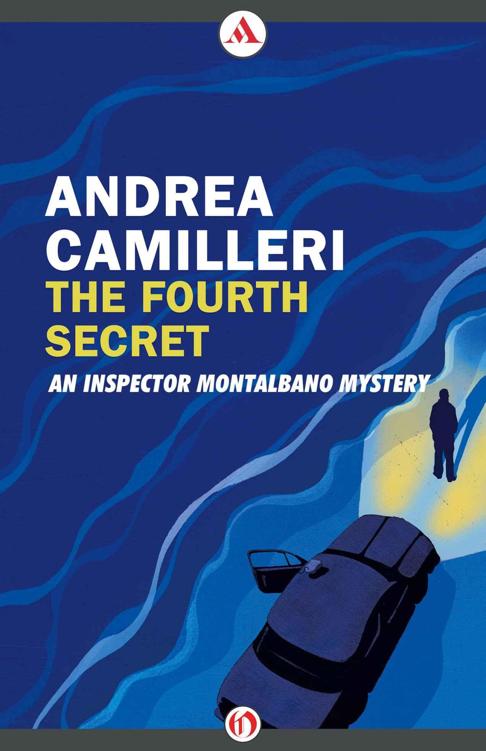 Why did he find himself, at about three in the morning, hiding in a doorway, following Catarella’s movements? As much as he tried, he couldn’t come up with an answer, but two things were certain: first, he knew that Catarella was doing something he wasn’t supposed to be doing; second, he knew that his officer needed to be kept in the dark about the fact that he was following him. But what was the meaning of this whole business? Was Catarella committing a crime? Wearing his uniform, keeping low to the ground, the officer was walking cautiously along the wall of a crumbling home, with black holes where the windows used to be. Growing further surprised, Montalbano noticed that Catarella was dragging his left foot and was holding his revolver. The street was completely deserted; of the ten lamps that were supposed to light it, five were out. The officer froze suddenly, looked around, then walked toward a car parked along the sidewalk. Even though it was dark, Montalbano thought he saw some movement in the car. In fact, the door opened and a man got out. What happened next looked like something out of an American film: as Catarella picked up speed heading toward the man, the stranger raised his gun and fired. It must have been a large-caliber weapon, for the officer, shot in the chest, was thrown against the wall two or three yards behind him. Before Montalbano could move, the man got back in the car, which then peeled away. In two leaps, the inspector reached Catarella. He was laying on the ground uncomfortably, with a big, dark stain in the middle of his chest. His eyes were closed and he was panting.

Catarella opened his eyes and managed to focus them on the inspector only with great difficulty.

Montalbano squatted next to him.

Catarella tried to speak, but a mouthful of blood prevented him from saying anything.

“No, sir,” Catarella whispered, “don’t call anyone, there’s no need. It’s all over. Haven’t you realized, sir? It’s all an act.”

Montalbano was confused: it was clear that the officer was delirious, so near to death he had lost his mind. But he couldn’t resist asking: “What do you mean it’s all an act?”

Catarella was grinning. Was it from joy or pain?

Montalbano insisted: “What do you mean?”

“That we’re in an opera, where people sing, sir. Haven’t you noticed that the blood on my jacket is just tomato juice?”

While the inspector stared at him, almost paralyzed by the surprise, Catarella stood up, put his hat back on, straightened his uniform, and then put his hand over his heart. He began to sing. Certainly, it was quite the situation, but the inspector couldn’t help but notice that Catarella had a nice voice.

And he fell back to the ground. Montalbano quickly realized that Catarella was dead. He was overtaken by a sudden wave of anger.

And in that scream there was horror, fear, and pain.

It was his own screaming that woke him up, drenched in sweat. He struggled to open his eyes, he felt like they had been sealed shut with a thick layer of sticky glue. He had just had a nightmare. And he immediately identified the reason for it: it must have been that generous pound of fresh fava beans he had eaten the night before, while sitting out on the patio, which he had washed down with a wheel of
primo sale
cheese, which Adelina had left for him in the fridge. The beauty of eating fresh fava beans consists in the pleasure of the double crack that anticipates the taste he’ll soon enjoy on his tongue and palate.

And in fact: first you have to crack open the outer pod of the fava, which is slightly hairy both inside and out, and feels nice to the touch; then there’s the slight crack of each single bean, which gives off a wonderful green smell that warms your heart. And while you crack, you think. And chances are you’ll find the right idea, the one that’s good for any situation: from how to make up with Livia to the how and why of a murder. Before falling back asleep, he remembered that he had once dreamed of Mimì Augello being killed while on a stakeout. That time, he remembered clearly, the reason had been half a lamb
al forno
with potatoes.

Naturally, the first person he saw walking into the station was Catarella, who was manning the telephones.

“No! How many times do I have to tell you? This isn’t the Cicalone funeral home! This is the Vigata police station in person. No, you got the wrong number! You want me to sing it to you?”

By now, Montalbano was convinced that in Vigata there was a secret fellowship comprised of sons of bitches who enjoyed calling Catarella pretending they had the wrong number. That verb
cantare
, “sing,” suddenly reminded him of his dream.

“Catarè, I didn’t know you had such a wonderful singing voice!”

Catarella was mopping up his forehead after a particularly difficult phone call and looked at him, confused.

“Sir, are you talking to me personally?”

“Who else would I be talking to, Catarè? It’s just the two of us in this broom closet!”

“Sir,” Catarella said, looking about and lowering his voice to a conspiring tone, “but, sir, by any chance, have you heard me sing before?”

“And when, sir?” Catarella asked, preoccupied.

Catarella made an astonished face.

“Sir, but last night, I spent it in my own bed by myself!”

“That’s true. But I heard you sing in my dreams.”

“
Santa Maria
, sir! Ah, sir, sir, what a beautiful thing you’re telling me! Sir, you dream of me at night!”

“Well, let’s not get carried away. … It’s not like it happens every night.”

“But last night, it did happen! And that means you sometimes think about me even when I’m not on duty!”

Montalbano realized Catarella’s eyes were tearing up, overwhelmed with emotion.

“But tell me something,” he asked to change the subject. “Why are you so concerned someone will hear you sing?”

Catarella let out a deep sigh.

“Ah, sir, sir, you should know that when I sing, I do damage. I’m so out of tune that dogs start barking as soon as they hear me. Can I tell you a story? One time, I was in my cousin Pepè’s car and all of a sudden I felt like singing. As soon as I opened my mouth, Pepè got scared, swerved, and the car ended up in a ditch. Pepè broke that bone that’s right on top of one’s ass, excuse my French. What’s it called? Oh, right, the tail-pipe bone.”

Montalbano was convinced that Mimì would have gotten a kick out of it he told him about his dream. But instead, he started frowning.

“And you call that a warning?”

“What else would you call it?”

“Listen, Mimì, when I dreamed that you got shot and died, was that a warning?”

“No, because nobody shot and killed me.”

The door to his office opened so violently that it slammed against the wall, knocking off the little bit of plaster that was left on it.

“Did it slip?” the inspector asked in a resigned voice.

“We just received an envelope, priority mail, with your personal address, in person.”

“You know,” Montalbano told Mimì, “why Catarella is so good with computers? Because his head works exactly the same. He says there’s an envelope for me, but if I don’t tell him it’s okay to bring it to me, he won’t do it.”

Catarella came back, put the envelope on the table, turned around, and headed for the door. Montalbano became a statue, his mouth open.

He stopped and turned.

“Why are you dragging your left foot?”

He needed to provide a different query to the computer.

“Because last night, I had a nightmare and tossed and turned so much in my bed that I fell out of it, sir.”

Montalbano didn’t want to know what kind of nightmare Catarella had. He felt a strange tickle along his spine; he was suddenly uneasy. Mimì had observed the scene and was growing more interested. But he waited for Catarella to leave the room.

“Salvo, can you tell me something? In your dream, wasn’t Catarella limping just like he is now?”

What a cop he was, that Mimì Augello!”

There was no way Montalbano was going to give him the satisfaction.

Fazio walked in holding in his arms a shaky pile of papers that needed to be signed.

“No!” the inspector yelled, turning pale.

“I’m sorry,” Fazio said, “but these need to go out today. There’s no two ways about it.”

He placed the pile on his desk. The recently delivered letter was buried. It resurfaced when it was already dark. But by then, Montalbano was too tired and nauseated by his first and last name: just reading the address almost made him throw up. He would open it the next day.

“You want to hear something funny, Livia? Last night, I dreamed about Catarella!”

No reaction came from the other end of the line.

“Oh. I was telling you that last night …”

That voice clearly wasn’t coming from the Boccadasse neighborhood in Genoa, but from a polar ice cap wrapped in a storm.

“You just said you dreamed about Catarella. Isn’t that enough?”

“Livia, are you out of your skull?”

“Don’t take that tone with me.”

“You’ve never ever told me that you’ve dreamed about me.”

That was true. He had dreamed about her and kept dreaming about her, but he never told her. Why?

“Now that you mention it …”

But no one was on the other end. For a second, he thought about calling her back, but then he changed his mind. That day, Livia was clearly feeling sour. She would have taken whatever he said the wrong way, and they would have fought even more. He plopped himself in front of the television, just in time to hear the last newscast on Rete Libera. After the intro, his friend Niccolò Zito appeared, saying that he was going to lead off the broadcast with something that had happened that very morning, that is, with the deadly fall of a construction worker off some scaffolding. Rete Libera had informed its viewers of that tragedy during the eight o’clock edition and had repeated it at one o’clock as well. However, it did not mention it in the five o’clock news. Why? Because in the accelerated and confused rhythm of our lives—Niccolò continued—this news wasn’t news anymore; it had grown old in the span of a few hours. The reason why he was talking about it again—he explained—was because he had conducted a brief search on how many people had died in the last month, in the province of Montelusa, due to what they euphemistically called “tragedies in the workplace.” There had been six of them. Six deaths caused by a complete disregard for safety regulations. Niccolò’s face was suddenly replaced by the horrifying images of dead people squashed and turned to bits. Under every image, the date of the accident and where it had happened. Montalbano felt his stomach turn. Zito reappeared stating that those images, which they usually refrain from showing, were meant to cause an outrage among his viewers.

Out of the Fire (Perilous Connections) by Beazer, Delka
The Nexus Series: Books 1-3 by J. Kraft Mitchell
From Within by Brian Delaney
Twilight 4 - Breaking dawn by Meyer, Stephenie
Heart of Gold by Michael Pryor
September Storm by Jernigan, Brenda
Lady Meriwyn's Punishment by Renee Rose
Not in Front of the Corgis by Brian Hoey
The Hundred Years War by Desmond Seward
Love All Out - The Complete Series (A Stepbrother Romance) by Ward, Alice