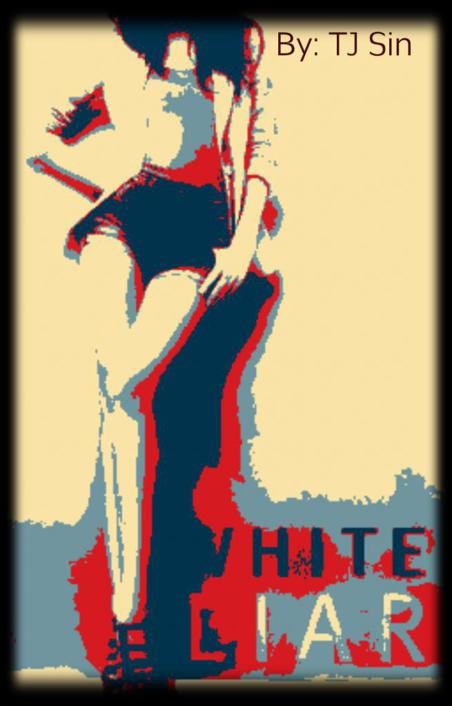 All rights reserved.  No parts of this Publication

may be reproduced, stored in a retrieval system or

transmitted, in any form or by any means without the prior

written permission of the publisher, nor be

otherwise circulated in any form of binding or cover

other than that which it is published and without a

similar condition being imposed on the

All characters in this publication are

Fictional
and any resemblance to real persons,

living or dead is purely

Special thanks goes to
all
of my supporters from Wattpad for their unwavering support and encouragement
throughout the writing process
.

And finally, I would like to thank my
loving and
faithful
husband, David
for always being there when I needed to bounce an idea off of someone and for just being around and listening to me go on and on and on.

“There he is,” Erica said, pointing at a guy that was surrounded by his own personal harem of women. Each one of them had their eyes essentially glued to him and each one shamelessly flaunted what they probably thought were part of their better assets.

Chloe shook her head.  She thought they all looked more like a litter full of pitiful puppies, each one vying for some personal attention from Northeast High’s resident
p
layer
,
Justin Pinnix.

From where the two girls stood
alongside
the school, Chloe studied the guy in action.  He had all the typical traits of your average
play
er; the tight body worthy of nothing short of hero status, the shaggy, mussed up hair that gave off
the
c
ome hither
look
and not to mention the crystal blue eyes that
reminded her of brilliantly jeweled
sapphire
s
.  Then there was also this cocky aura surrounding him that said
,
I am the man, so what are you going to do about it?

“So, what do you think?” Erica asked impatiently nudging Chloe in the side.  She chewed on her bottom lip as she watched the man of the hour in action.

Just recently, Chloe's mother had lost her long
-
time job as a
re
cep
tionist with a deteriorating textile firm.  She struggled with finding any new work in the small town
they lived in, called
Bluefort. She put in application after application but received no call
-
backs.  They were on the verge of being kicked out of their apartment; they had no money and very little food.

Finally, her mother made an executive decision to move the two of them in with her brother’s family after he offered her a job at his used car dealership.  He also told them that they could use
the guest room for as long as they needed
,
while they got back on their feet and saved enough money for the two of them to rent their own place.  It was a deal that she couldn't pass up.

Chloe and her mother moved in over the weekend and upon their arrival, Chloe found her dear sweet cousin Erica in tears, down right nearing a complete emotional melt down.  From what she was able to understand through heart-wrenching sobs
was that
Mr. Player had done quite a number on her. He
took her out several times, sp
outed off some pretty words of poetry and after he achieved the one thing that he really wanted from her all along, her precious virginity, he walked away.  He never once looked back and damn near broke Erica’s naïve little heart in the process.

Erica Stanfield was much too innocent for this day and age, Chloe had thought to herself.  But now that she was here, she felt it was high time to
educate her.

And as far as being here went, she was planning to do a little breaking of her own
,
Chloe Miller style.

“I think,” she told her speculatively while twisting a loose curl around her finger, “That Mr. Pinnix is in for one hell of a rude awakening.”

With the excitement so clear in Erica’s voice, you would have thought that her cousin had just offered her the moon.

Chloe sighed and kicked up the corner of her lips. Oh yeah, she knew exactly what she was going to do.  She was going to teach a certain
Mr. Player
a very important lesson in life. A lesson that he would surely never forget, because by the time that she got through with Justin Pinnix, he wouldn’t have a clue what hit him. None whatsoever.

“Alright,” she replied, ready to get this show on the road. Glancing over at Erica, Chloe placed a reassuring hand on her shoulder.  “Just remember what I told you. Keep your head up, smile at him as if he was the sweetest thing in the world and act like nothing ever happened.  Let me handle the rest.”

Erica forced a smile on her face and nodded determinedly.  “Okay. I can do this,” she said confidently.

Chloe gave her shoulder an affectionate squeeze. “Yes. Yes you can
,
and in the end it will be us that has the last laugh.”

This time when Erica smiled, it was an honest one. The first bell rang, startling the both of them and Chloe pushed herself off the wall.  Reaching down, she grabbed her book bag off the floor and hitched it up high over her shoulder. Turning around to head off in the opposite direction,
Chloe
waved goodbye and shouted back over her shoulder, “See you at lunch
!
”

Still smiling, Erica briefly nodded and then turned on her heels to head off
to
her first class.

Walking through the halls, Chloe stared down at her class schedule and then looked back up at the room numbers, “two ‘o one….two ‘o three….two ‘o five.”  Stopping in the center of the hall, she threw both of her hands up in the air frustrated to no end.

“Where the heck is room two ‘o four?”  She exclaimed.

“Excuse me Miss, do you need some help?”

“No-” Chloe bit out before looking up and finding herself staring up into a pair of the most gorgeous cerulean blue eyes that she had ever laid her sights on.  So blue, that she would swear that she could almost see a mirror imag
e
of her own self reflected in those idyllic orbs.

The boy smirked back at her and he had a way about him that exuded extreme confidence. Shaking her head slightly, she took a step back and smirked a little herself.

Well, well, well.  What do we have here? The infamous Justin Pinnix.

“You’re new here
,
right?”  He asked when she didn’t offer anything else.

Chloe flicked her head back, sending her hair swishing over her shoulder.

“Yup,” she said, making sure to pop the “P” at the end.  She followed that by making a blatant attempt in doing a not so subtle once over from the top of his head to the bottom of his size twelve feet.  She finished with a very loud smacking of her lips.

“To answer your question,” she started and paused, still shamelessly eyeing his body and then shook her head before she continued, “Nah, I don’t think I need help from the likes of you.”

Justin’s smile instantly fell from his face and his brow furrowed in confusion.

Without waiting for his impending protest, Chloe turned around and started off down the halls, once again in search
of
her English class.  He could stand there in the middle of the hall for the rest of the day for all she cared. She had places to go and things to do; part of that included devising a plan to bring the numb-nut down several levels.

When she reached the next section of the hall, Chloe realized that these were the even-numbered rooms and easily found room two ‘o four.

“Here we go,” she muttered to herself while stepping over the threshold.

The room was already half filled at first look.  After a long second, she spotted an empty desk towards the back of the room that was calling her name.  Making her way towards the desk, she completely ignored all of the hushed whispers and the strange looks she was receiving. She was all too aware that any time a new student arrive
d
, there was a production of sorts.  Today, she was evidently that production.

Collapsing in the chair, Chloe thought about her plan and how fun it was going to be bringing down enemy number one a notch or two.  She had waited a long time for this type of opportunity and now that it was here, she was ecstatic.  Watching the player’s ultimate fall from grace was going to be so priceless.

Turning back to the class that was about to begin, she started to dig through her book bag for a pen. She was rudely interrupted by the unmistakable sound of a throat clearing.  At first, Chloe decided to ignore it and pulled out her notebook, readying herself for the class.  The same person cleared their throat again, more insistent this time and very annoying.  Carefully, she laid her pen on the desk and looked up at the culprit - Justin.  Somehow she knew it would be him standing beside her desk.  He was scowling with his hands crossed over his chest.

Amused, Chloe only lifted her brow in question, “You need something?”

Justin dropped his hands by his sides and tilted his head to the side, looking devilishly handsome, for a player.

Standing up, Chloe began to look all around the desk.  She even went as far as to lift the chair upside down and looked over it before turning it right-side up again, then sitting back down on it.

“Because I don’t see your name on it.”

The two of them now had the attention of the whole class watching the scene play out.  No one ever spoke to Justin Pinnix like that.  He narrowed his eyes on her and flared out his nostrils; even his cheeks were tinted red with anger.

“Oh, is somebody getting a little bit upset?”  She teased with mock sweetness.

Chloe made sure to milk the ungodly sugar coating act as far as she could, while dramatically batting her eyelashes and cocking her head to the side, grinning up at him.

Pausing for just a second, she let her grin slightly falter and sat up straighter in her seat.  She took her time while crossing one leg over the other.

“Too bad, so sad,” she snapped, “Now get lost,” she added with true conviction and turned away from him, effectively dismissing the annoying guy from her presence.

Justin seethed.  He was madder than a cornered rattlesnake and the rigid stance of his body was the perfect indicator.  The edge of his mouth twitched uncontrollably, as he silently debated his next move.

Who in the hell was this chick?

For once, he was at a loss for words.  He didn’t know what to say.  Huffing rather loudly, making damn sure that she heard him, he turned around and started to walk off.

A couple of
Ooo’s
and
You got dissed’s
were whispered throughout the room, but Chloe didn’t give a flying flip.  She was too busy enjoying her very first victory over Justin and muttered under her breath, “That’s what I thought.”

Made For Each Other by Parris Afton Bonds
Lady Anne's Lover (The London List) by Maggie Robinson
Cherringham--Death on a Summer Night by Neil Richards
The Short Sweet Dream of Eduardo Gutierrez by Jimmy Breslin
Beowulf by Anonymous, Gummere
Kitty Rocks the House by Carrie Vaughn
CLUB NUMBER FIVE (Immortal Blood) by Loiske, Jennifer
Midnight Sky (Dark Sky Book 2) by Amy Braun
Hazardous Duty by Christy Barritt
This Is Not The End: But I Can See It From Here (The Big Red Z Book 1) by Thomas Head