The Further Adventures of Sherlock Holmes: The Whitechapel Horrors 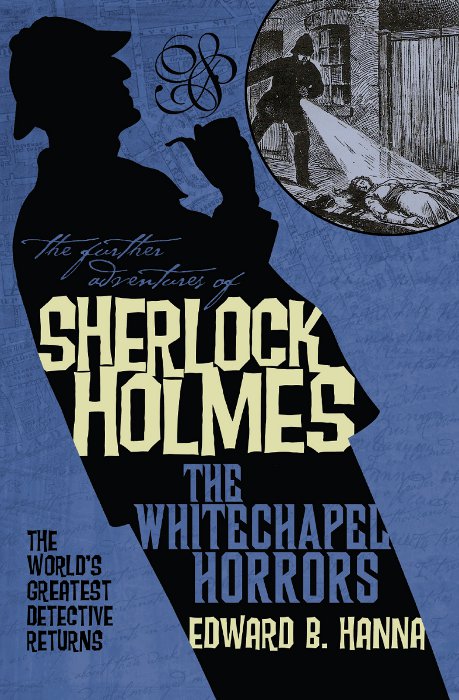 THE SCROLL OF THE DEAD

THE WAR OF THE WORLDS

THE MAN FROM HELL

THE GIANT RAT OF SUMATRA

THE ANGEL OF THE OPERA

The further adventures of

THE FURTHER ADVENTURES OF SHERLOCK HOLMES:

Names, places and incidents are either products of the author’s imagination or used fictitiously. Any resemblance to actual persons, living or dead (except for satirical purposes), is entirely coincidental.

What did you think of this book? We love to hear from our readers. Please email us at:
[email protected]
, or write to us at the above address. To receive advance information, news, competitions, and exclusive Titan offers online, please sign-up for the Titan newsletter on our website:
www.titanbooks.com

Printed and bound in the USA.

“To Sherlock Holmes she is always the woman. I have seldom heard him mention her under any other name. In his eyes she eclipses and predominates the whole of her sex.” —
A Scandal in Bohemia

For Marcia,
the
woman in my life

E
dward B. Hanna was a dedicated bibliophile. He had thousands of books on hundreds of subjects, not the least of which was the work of Sir Arthur Conan Doyle.

He was most in his element surrounded by the written word and steeped in history. In the later years of his life he researched and wrote in the privacy of his study with his patient cat, Mystère, distracting him only to remind him that it was dinnertime.

Always the harshest critic of his own work, he constantly wrote, rewrote and destroyed his work. He spoke of his book subjects to no one, saying that when shared he lost interest in his subjects.

When Hanna completed
The Whitechapel Horrors
, he revealed to his beloved wife that the ending surprised him. Hanna had a certain conclusion in mind when he began the book, however, the writing of the tale of Mr. Holmes and Dr. Watson took on its own life. It is fair to say that in the composition of this work the characters became alive for Hanna and created their own destiny.

I hope that you find enjoyment from
The Whitechapel Horrors
.

“Somewhere in the vaults of the bank of Cox & Company, at Charing Cross, there is a travel-worn and battered tin dispatch-box with my name, John H. Watson, M.D., Late Indian Army, painted on the lid.”

—
The Problem of Thor Bridge

O
ne of the first official acts of Mr. Ronald F. Jones upon taking up his new position as director and general manager of London’s venerable Claridge’s was to inspect the contents of the safe in his office. There were two surprises.

The first was an unopened
basquaise
, or flat, long-necked flagon of very old and equally fine Armagnac, a Reserve d’Artagnan, if the faded label was to be believed.

The second was a thick leather portfolio, also very old and once very fine, with the initials
JHW
embossed in faded gold leaf in the center.

The leather portfolio was more easily explained. It had been left in the care of Claridge’s management by a gentleman who had been a permanent resident for as long as even the oldest staff member could recall. He was a retired surgeon by the name of Anstruther who, being a childless widower and the last of his line, had no family, and being quite elderly, had outlived all of his friends and contemporaries.

It seems that Mr. Anstruther had little faith in banks, having lost a sizable part of a large inheritance during the Great Depression, and no trust in the legal profession, upon which he blamed most of the ills of the world (“First, kill all the lawyers,” he was fond of misquoting Shakespeare). Therefore, he chose the strongbox of Claridge’s, which he considered the second safest depository in all of England. Banks could fail, Britain could lose her Empire, but Claridge’s? Claridge’s would remain unchanged, untouched, untroubled for as long as that other great monument to the English race and Western civilization, the Tower of London. And since its vaults were otherwise occupied, Claridge’s safe would simply have to do.

But then one day old Mr. Anstruther died, and the worn, cracked leather portfolio remained quite forgotten until the occasion, several years later, when Mr. Jones took up his new position.

Having more pressing matters on his mind at that time, it was not until a number of months had passed and Mr. Jones once again had occasion to rummage through the contents of the safe, that the presence of the portfolio (and the Armagnac) came to mind. The temptation to open both came upon him, the portfolio because he was curious, the Armagnac because it had been a particularly arduous day. But one just doesn’t break the seals of a bottle of old and rare brandy on a whim or without proper occasion, especially since it had remained undisturbed
in its sanctuary for how many years? Its very presence, though known to few, had become as much a part of Claridge’s as the marble and mahogany and gleaming brass of the public rooms, and though there was little likelihood of a rightful owner returning to reclaim it, or of some hidebound traditionalist writing an indignant letter to
The Times
, good form and Mr. Jones’s integrity demanded the bottle be returned undisturbed to its place of rest. Besides, if the truth be known, he was really partial to cognac.

The portfolio? Ah, well, that was another matter.

The topmost document was a letter, a sheet of heavy foolscap yellowed with age, bearing the logotype of Cox & Company, Charing Cross, London. It was dated July 30, 1929, and was addressed to Mr. Elwyn Anstruther, F.R.C.S., Harley Street. At first reading the brief contents were uninteresting, disappointing, a dry and formal communication from banker to client.

I have to inform you of the unfortunate death, on the 24th instant, of Dr. John Hamish Watson, an honored client of Cox & Company of many years standing.

It had been Dr. Watson’s custom, from time to time, to entrust to our safekeeping various notes and records of a confidential nature, the contents of which I, naturally, have no knowledge. It was his wish, as expressed in a letter of instructions to this firm, that upon his death the folio, hereunto attached, was to be delivered over to Dr. Ian Anstruther of London Hospital and Queen Anne Street whom, upon inquiry, we learned to have passed on these several years since.
1
The late Dr. Anstruther was, I believe, your father.

Accordingly, upon consultation with the firm’s solicitors, and having determined you to be the only surviving son and heir of said Dr. Ian Anstruther, Cox & Company deem it will have acquitted itself of its responsibility by delivering over to you the aforementioned file.

If, sir, Cox & Company may be of any further assistance, you have only to communicate with the undersigned at the firm’s offices in Charing Cross.

There was a brief postscript at the bottom of the page:

I call to your particular attention that at the behest of the late Dr. Watson, included in the document attached hereunto, none of the contents of this file may be publicly revealed until the year 2000, or until such time as fifty years shall have passed from the date of his death, whichever comes later.

Inside the folder Mr. Jones found a thick sheaf of unbound manuscript paper, yellowed and somewhat brittle to the touch, the top sheet containing a dozen or so lines set down in a neat but spidery hand. Mr. Jones gasped, scarcely believing what he read. There were two names that seemed to separate themselves from the jumble of other words on the page and leap into sharp focus — two names from long ago. Both were remembered with awe, one with something approaching reverence, the other with utter horror:

Off The Market by Vernon, Magan, 12 NAs of Christmas
Dark Tide 1: Onslaught by Michael A. Stackpole
The Holloways (Made for Love Book 3.5) by Martin, R.C.
Scarecrow by Matthew Reilly
A Separate Country by Hicks, Robert
Luathara - Book Three of the Otherworld Trilogy by Johnson, Jenna Elizabeth
The Atomic Weight of Love by Elizabeth J Church
Dancers in the Dark by Ava J. Smith
Officer Bad Boy by Shana James
Blood Enchantment by Tamara Rose Blodgett