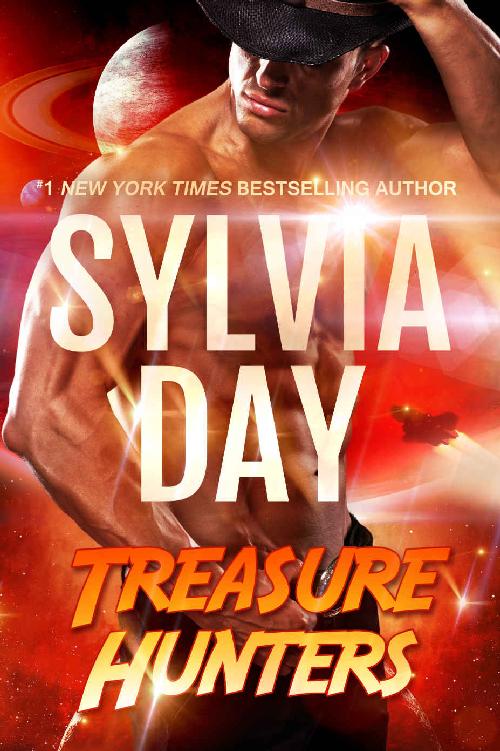 IF THE GUY IN
her office weren’t so damn gorgeous she might be able to think properly. But he was yummy. In fact, he was so unbelievably handsome Samantha was staring, something that was brought to her attention by the long, masculine fingers snapping in front of her face.

“Miss Tremain.” His deep voice, though soft, was filled with exasperation. “Are you listening to me?”

“Beg your pardon?” She blinked rapidly.

He exhaled and took the seat in front of her desk. Crossing one ankle over the opposite knee, he bared to her view an impressive bulge behind the tightened lacings of his pants.

“Animal,” she breathed. The bulge jerked in response. “Huh?”

Sam coughed into her hand as her face heated. “A-animal skin.”

“Yeah. It is.” Bright blue eyes flashed briefly before narrowing. “I was told that you’re the foremost expert on literary antiquities in this part of the galaxy, Miss Tremain. Is that right or should I be looking for help elsewhere?”

“Oh…” The way he said his own name, like it was a sensual threat, made her shiver. And the way he was dressed, in animal skin and some billowing material for a shirt, made her mouth dry. “Why aren’t you wearing a bio-suit?”

A dark brow rose. “You want to talk about my clothes?” He shook his head. “You brainy types are always a little weird.”

“Look who’s talking,” she retorted, stung by his comment, one which she’d heard a thousand times. “You are a twenty-third-century mercenary who dresses in nineteenth- century clothing while tracking down a legendary twenty-first-century treasure. Shouldn’t you be doing something else? Killing for hire or something of that nature?”

Blowing a loose tendril of hair from her face, Sam stood and began to pace. As long as she didn’t look at that breathtaking face, she could keep her wits about her. His dark hair, tan skin and eyes like the Laruvian Ocean were bad enough. When you added in the broad shoulders, tapered hips and animal skin-covered bulge, she had a living wet dream sitting right in her office.

Rick Bronson chuckled and the warm sound of amusement made her womb clench. “Whatever a mercenary does, he does for credits. Hunting treasure is a hunt for credits. Pretty easy to figure out.”

“But why this particular treasure?”

Sam sighed with longing. “Now that the ban has been revoked, finding those stories would not only return literary treasures to the people, but it would help lift this sexual repression that has stifled us all for so long.”

Towering over her, he lifted his hand to touch her hair. Sam could swear she felt that touch all the way to her toes, hitting all her erogenous zones on the way down.

“What is this?” he asked, brushing his hand across the tight bun on top of her head.

“Huh?” Damn, he smelled good, too. Nowadays droids did everything, leaving a lot of men soft. Rick was hard all—

Yep. Hard all over.

He gave a quick tug and her hair tumbled around her shoulders in a wild mess. “Hey!” she protested, snatching at his hand. He moved too quickly and held her hairpin up high, out of her reach.

“What is this thing you had in your hair?” he repeated, staring at her.

She wrinkled her nose. “The stylus for my eBookman.”

His eyes widened. “You have a working eBookman?” His hand dropped and he tucked the stylus in his pocket.

“Give me that back,” she snapped, brushing her hair away from her face and twisting it into a coil. “Do you know how hard those things are to find on the black market?”

“You can use your finger to work it, you know,” he offered helpfully.

As innocent as his statement was, the fact that it came from a man who looked like he did gave it an added sexual dimension. Sam blushed so hard her face felt like it was on fire.

“I can’t work with my hair falling in my face!”

“And I can’t work with your hair all prim and tied up like that. It’s distracting.” He walked away.

“Who said I was going to work with you?”

Rick snorted. “You survive on grants for your research. In order to get those grants, you’re forced to give speeches and offer some of your precious collection for traveling museum tours. I heard you lost a good portion of your pop culture collection in a raid by antiquity pirates a few months ago.”

“I did.” She sighed with regret. “It was dreadful. Years of collecting and cataloguing were lost.” Shaking her head, she hit the button that opened her desk drawer. It slid outward silently and she dug through the scattered contents.

“Think of the credits you would receive if we found that lost database. Don’t you find the thought tempting?”

Looking up, Sam stared at him hard. “Exactly how much would my share be?”

“You’d give me half?” Her eyes narrowed suspiciously.

“Sure. You’re the brains, I’m the brawn. We’d be a team, therefore you should get just as many credits as I do.”

“I could keep my brains to myself and hire brawn elsewhere. Then I could keep more than half. What have you got to offer in return for your share?”

“How about this?” He reached into his shirt and pulled out a chain he wore around his neck. Hanging from that was a small cylindrical data chip
.
“I was told it’s ‘
the key
’, whatever the hell that means. I can’t find any details about how to use it, but I did find a lot of references to a key being required to access the databases.”

“Where did you get that?” she asked, holding out her hand for it.

His brows rose again. “I won it in a wager. The previous owner gave up trying to do something with it.” As he dropped the chain back into the neck of his shirt, Sam caught a glimpse of warm, golden skin. “You can examine it all you want,
if
you agree to help me.”

She swallowed hard and returned her attention to the contents of the drawer. “Ha!” she cried triumphantly, holding up a hair clip with mostly broken tines and then using it to pin up her wild tresses. “I’m a born scavenger.”

“Why don’t you prove it,” he challenged, “by assisting me? Think of all the people you’ll help if we get those books back on the market. Besides, wouldn’t you like a little adventure?”

Adventure.
She supposed it would be exciting to do the research up close, instead of through pictures and archaic phrases in books. But that wasn’t what decided her mind. It was Rick Bronson who did that. The prospect of spending more time with him was far more exciting than her studies or the possibility of treasure. In her line of work, most of the men she ran across were bookish and slight of build. She’d never met any man as blatantly primitive as the mercenary in her office. He was, quite simply, an erotic e- book hero come to life.

“I’m the keynote speaker at the Retro-bration kickoff on Rashier 6,” she said, crossing her arms over her chest. “That’s a month from now. So that’s all the time you’re getting. You do what I say, when I say and we just might get somewhere in that limited amount of time.”

“I certainly hope we get somewhere.”

The sudden heat of his gaze startled her into gaping. Was that sexual innuendo? She gave herself a mental kick in the ass. Rick Bronson couldn’t be interested in her.

She was short and kind of plump, with dark brown hair and plain brown eyes. It was never physical lust that inspired her sexual encounters. No, they were more like “
Hey, I’m tired of studying this. Wanna fuck?
” kinds of encounters. Like an afterthought or just a break from the monotony. Although they were sometimes more boring than painstaking cataloguing.

“Shall we get started then?” he asked, breaking into her musings. “Yeah, let me gather up a few things and I’ll meet you on your ship.” He nodded. “Need my help with anything?”

A screaming orgasm would be nice.

“Uh, no,” she said, blushing at her own carnal thoughts. “I can manage.”

Reminder to self: Pack sex toys.

It was going to be a long month.

Rick stepped out of Samantha Tremain’s book-lined office and adjusted the fit of his pants. Who knew he had a liking for semi-timid librarians? He certainly hadn’t. Not until he’d been ignored by a pretty little brunette one.

Lost in her book, Samantha had sat there chewing on her nail and muttering to herself. He’d almost opened his mouth to let her know she wasn’t alone, but she’d been so damn adorable with her nose all wrinkled up and her soft brown eyes capped with a frown of concentration. Reluctant to disturb her, he’d just watched her silently until she caught sight of him lounging by the door. Then she’d turned that studious gaze on him, raking him from head to toe, stopping for a long moment at his cock. He knew sexual appreciation when he saw it and surprisingly, he’d been turned on by her almost scientific perusal. Her subsequent dazed inability to speak had been very flattering.

Before approaching her, Rick had done his research into her areas of specialty. He’d seen her picture, read her theories and perused database photos of her collections. None of that was able to convey the woman as she was in the flesh. There was just something about her, an indefinable quality, almost as if she were starving for something. Knowing women like he did, Rick would say she was hungry for a good fucking. He doubted she’d ever been ridden properly.

Most men were sadly ignorant about women like Samantha, thinking they liked a gentle hand. Perhaps most of them did. But there were clues that told him Sam wasn’t one of them.

The hair for one.

By the gods, those skeins of chocolate silk had fallen down from that tight bun and he’d grown bone hard in an instant. She wore it up because it got in the way, but she didn’t cut it. Why? He’d bet it was because it made her feel sexy. He could easily see her naked, that cascade of dark hair tumbling down her back.

In fact, he planned to do just that.

After the adorable way she’d blushed with her own naughty thoughts, he knew she’d be a handful and the prospect of all the fun he could have with her over the next month was just too good to pass up. The two of them alone on his ship, days passing with nothing to do besides lie in bed and fuck like crazy. He had to pat himself on the back for coming to Samantha Tremain instead of Professor Terrance Milton of the Tolan University. It hadn’t been Rick’s intent to get involved in anything personal, but he knew a priceless opportunity when it stared him in the face. And a great ass. He knew one of those when he saw it, too.