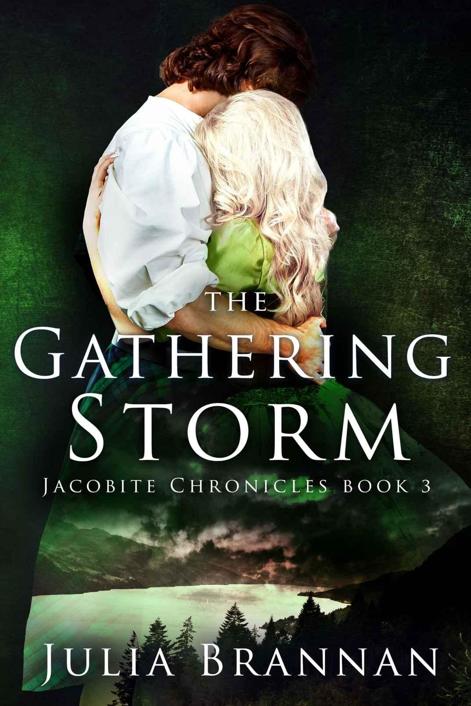 Book One: Mask of Duplicity

Julia Brannan has asserted her right to be identified as the author of this work under the Copyright, Designs and Patents Act 1988

This novel is a work of fiction, and except in the case of historical fact, any resemblance to actual persons, living or dead, is purely coincidental

Photograph of Scotland by Julia Brannan

In memory of my mother and best friend, Flora Brannan. She taught me to read, and, more importantly, instilled in me a love and understanding of the power and beauty of the written word. She encouraged me to write, to be the best I could be, whilst accepting me as I was and loving me unconditionally. I owe her everything, and miss her every day.

First of all, I would like to thank my good friend Mary Brady, who painstakingly reads and rereads every chapter as I write, spending hours on the phone with me, giving me encouragement and valuable suggestions as to how to improve the book. I owe her an enormous and ongoing debt of gratitude.

I also want to thank my wonderful partner Jason Gardiner, who puts up with me living in the eighteenth century as I write the books in this series, and who has supported and encouraged me through the long months of writing, and hopefully will continue to do so!

Thanks also to all the friends who read my books and encouraged me to publish them, including Alyson Cairns and Mandy Condon, who has already determined the cast list for the film of the books, and also to all the wonderful people who have read Mask of Duplicity and The Mask Revealed, have recommended them to others, and have given me their valuable feedback and reviews. I hope you enjoy book three as much as you’ve enjoyed books one and two!

Thank you to the other successful authors who have so generously given me their time, advice and encouragement, especially Kym Grosso and Victoria Danann.

Thanks also have to go to the long-suffering staff of Ystradgynlais library, who hunted down obscure research books for me, and put up with my endless requests for strange information.

I’d also like to thank Najla Qamber, who once again has come up with a beautiful cover design for my book. She’s wonderful to work with, and I couldn’t do without her.

And to Jason Tobias and Jax Styrna, the models for this cover – thank you for your hard work and professionalism during the photo shoot. You are awesome!

If I’ve forgotten anyone, please remind me and I will grovel and apologise profusely, and include you in the acknowledgements in my next book!

Although this series starts in 1742 and deals with the Jacobite Rebellion of 1745, the events that culminated in this uprising started a long time before, in 1685, in fact. This was when King Charles II died without leaving an heir, and the throne passed to his Roman Catholic younger brother James, who then became James II of England and Wales, and VII of Scotland. His attempts to promote toleration of Roman Catholics and Presbyterians did not meet with approval from the Anglican establishment, but he was generally tolerated because he was in his 50s, and his daughters, who would succeed him, were committed Protestants. But in 1688 James’ second wife gave birth to a son, also named James, who was christened Roman Catholic. It now seemed certain that Catholics would return to the throne long-term, which was anathema to Protestants.

Consequently James’ daughter Mary and her husband William of Orange were invited to jointly rule in James’ place, and James was deposed, finally leaving for France in 1689. However, many Catholics, Episcopalians and Tory royalists still considered James to be the legitimate monarch.

The first Jacobite rebellion, led by Viscount Dundee in April 1689, routed King William’s force at the Battle of Killikrankie, but unfortunately Dundee himself was killed, leaving the Jacobite forces leaderless, and in May 1690 they suffered a heavy defeat. King William offered all the Highland clans a pardon if they would take an oath of allegiance in front of a magistrate before 1
st
January 1692. Due to the weather and a general reluctance, some clans failed to make it to the places appointed for the oath to be taken, resulting in the infamous Glencoe Massacre of Clan MacDonald in February 1692. By spring all the clans had taken the oath, and it seemed that the Stuart cause was dead.

However, a series of economic and political disasters by William and his government left many people dissatisfied with his reign, and a number of these flocked to the Jacobite cause. In 1707, the Act of Union between Scotland and England, one of the intentions of which was to put an end to hopes of a Stuart restoration to the throne, was deeply unpopular with most Scots, as it delivered no benefits to the majority of the Scottish population.

Following the deaths of William and Mary, Mary’s sister Anne became Queen, dying without leaving an heir in 1714, after which George I of Hanover took the throne. This raised the question of the succession again, and in 1715 a number of Scottish nobles and Tories took up arms against the Hanoverian monarch.

The rebellion was led by the Earl of Mar, but he was not a great military leader and the Jacobite army suffered a series of defeats, finally disbanding completely when six thousand Dutch troops landed in support of Hanover. Following this, the Highlands of Scotland were garrisoned and hundreds of miles of new roads were built, in an attempt to thwart any further risings in favour of the Stuarts.

By the early 1740s, this operation was scaled back when it seemed unlikely that the aging James Stuart, ‘the Old Pretender,’ would spearhead another attempt to take the throne. However, the hopes of those who wanted to dissolve the Union and return the Stuarts to their rightful place were centring not on James, but on his young, handsome and charismatic son Charles Edward Stuart, as yet something of an unknown quantity.

I would strongly recommend that you read the first two books in the series, Mask Of Duplicity and The Mask Revealed before starting this one! However, if you are determined not to, here’s a summary of the first two to help you enjoy Book Three…

The Story So Far

Book One – Mask of Duplicity

Following the death of their father, Elizabeth (Beth) Cunningham and her older half-brother Richard, a dragoon sergeant, are reunited after a thirteen year separation, when he comes home to Manchester to claim his inheritance. He soon discovers that while their father’s will left her a large dowry, the investments which he has inherited will not be sufficient for him to further his military ambitions. He decides therefore to persuade his sister to renew the acquaintance with her aristocratic cousins, in the hope that her looks and dowry will attract a wealthy husband willing to purchase him a commission in the army. Beth refuses, partly because she is happy living an unrestricted lifestyle, and partly because the family rejected her father following his second marriage to her mother, a Scottish seamstress.

Her cousin, the pompous Lord Edward and his downtrodden sisters accept Richard and Beth back into the family, where she meets the interesting and gossipy, but very foppish Sir Anthony Peters. After a few weeks of living their monotonous lifestyle, Beth becomes extremely bored and sneaks off to town for a day, where she is followed by a footpad. Taking refuge in a disused room, she inadvertently comes upon a gang of Jacobite plotters, one of whom takes great pains to hide his face, although she notices a scar on his hand. They are impressed by her bravery and instead of killing her, escort her home. A secret Jacobite herself, she doesn’t tell her Hanoverian family what has happened, and soon repairs with them to London for the season.

Once there, she meets many new people and attracts a great number of suitors, but is not interested in any of them until she falls in love with Daniel, the Earl of Highbury’s son. The relationship progresses until she discovers that his main motivation for marrying her is to use her dowry to clear his gambling debts. She rejects him, but becomes increasingly depressed.

In the meantime, the Jacobite gang, the chief members of whom are Alex MacGregor (the scarred man) and his brothers Angus and Duncan, are operating in the London area, smuggling weapons, collecting information, visiting brothels etc.

Sir Anthony, now a regular visitor to the house, becomes a friend of sorts, and introduces her to his wide circle of acquaintance, including the King, the Duke of Cumberland and Edwin Harlow MP and his wife Caroline. Beth does not trust the painted Sir Anthony and thinks him physically repulsive, but finds him amusing. Following an ultimatum from her brother that if she keeps rejecting suitors he will find her a husband himself, she accepts a marriage proposal from Sir Anthony, partly because he seems kind, but chiefly because he has discovered a rosary belonging to her, and she is afraid he will denounce her as a Catholic, which would result in her rejection from society and her brother’s vengeance.

The night before her wedding, Beth is abducted by Daniel, who, in a desperate attempt to avoid being imprisoned for debt, attempts to marry her by force. Beth’s maid, Sarah, alerts the Cunninghams and Sir Anthony to Beth’s plight, and she is rescued by her fiancé. He then gives her the option to call off the wedding, but thinking that being married to him is the best of the limited options she has available to her, she agrees to go ahead as planned.

Sir Anthony and Beth marry. The following evening at a function, he has to remove his glove and she sees his hand and its scar for the first time, and remembers where she has seen it before. Having removed his furious wife by force from the company before she can give him away, Sir Anthony admits that he is a Jacobite spy, and that he is really Alex MacGregor. He explains the odd circumstances that led him to follow such a strange double life, and admits that he married her mainly for love, intends to make her dowry over to her and effect a separation, thereby giving her her freedom. She, being of a very adventurous spirit, refuses, stating that she intends to stay with him. He tries to persuade her against this, as his lifestyle is a dangerous one, but eventually he agrees, and they go on honeymoon to Europe together, as Sir Anthony and wife.

He explains that he will be visiting Prince Charles Stuart, son of the exiled King James, as a few weeks ago the Duke of Newcastle, not knowing him to be a Jacobite spy, recruited him on behalf of the Hanoverians, to become acquainted with the prince and report back any useful information.

On the way to Rome, Angus (who has accompanied them as a servant) overhears a private conversation between two French courtiers, in which it is revealed that King Louis of France is secretly planning to invade England, and that one of the men (Henri), intends to give the plans to the British. Alex now decides he must do something to prevent this, but must first carry on to meet Charles and convey the news of the prospective invasion to him. He does, and Beth and Alex are married again in Rome under their real names.