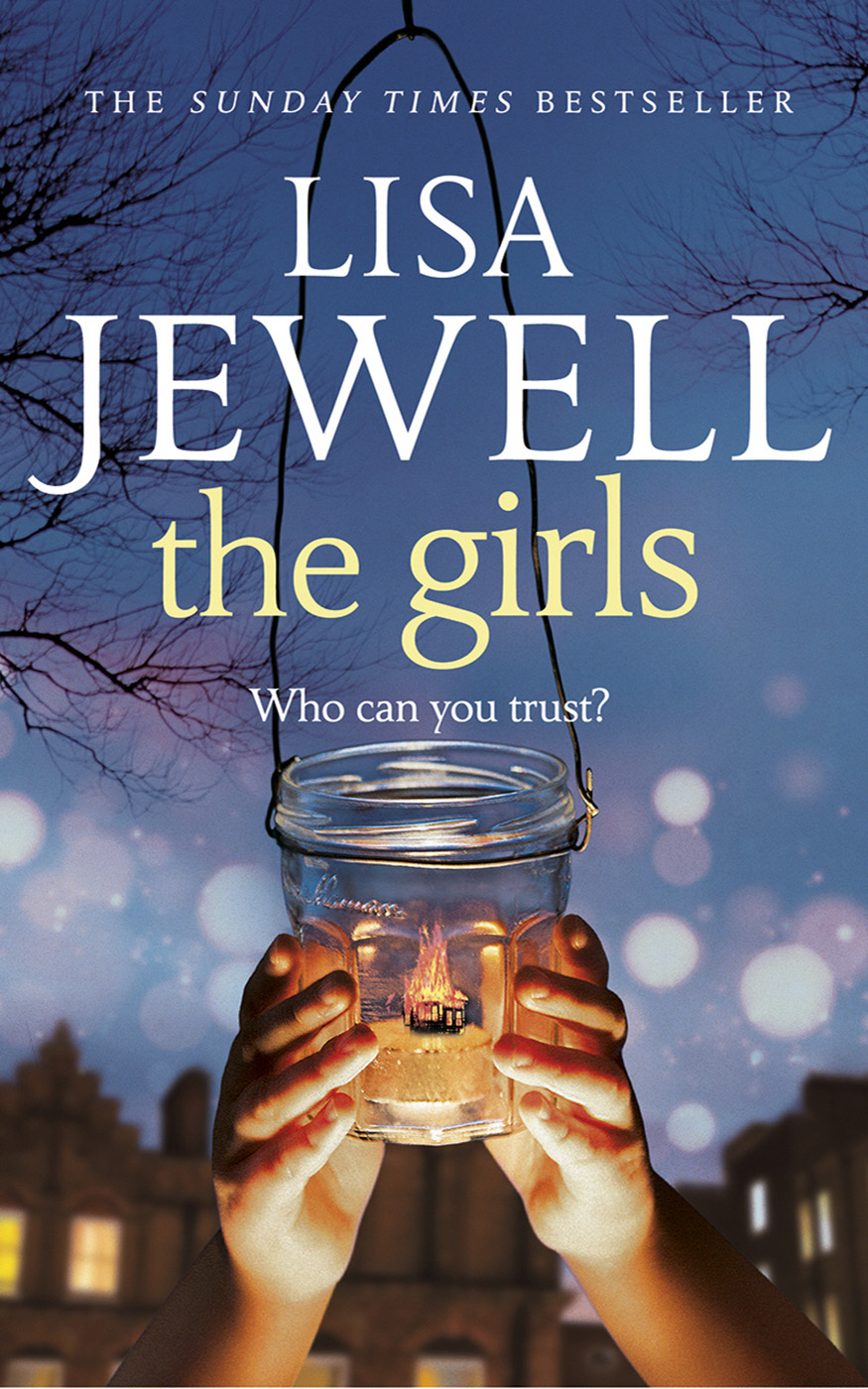 You live on a picturesque communal garden square, an oasis in urban London where your children run free, in and out of other people’s houses.

You’ve known your neighbours for years and you
trust
them. Implicitly.

You think your children are safe.

But are they
really
?

Midsummer night
: a thirteen-year-old girl is found unconscious in a dark corner of the garden square. What really happened to her? And who is responsible?

Dark secrets, a devastating mystery and the games children play lie at the heart of Lisa Jewell’s gripping new novel.

Lisa Jewell had always planned to write her first book when she was fifty. In fact, she wrote it when she was twenty-seven and had just been made redundant from her job as a secretary. Inspired by Nick Hornby’s
High Fidelity
, a book about young people just like her who lived in London, she wrote the first three chapters of what was to become her first novel,
Ralph’s Party
. It went on to become the bestselling debut novel of 1998.

Twelve bestselling novels later, she lives in London with her husband and their two daughters. Lisa writes every day in a local cafe where she can drink coffee, people-watch, and, without access to the internet, actually get some work done.

Dedicated to all my neighbours on the C&G Gardens 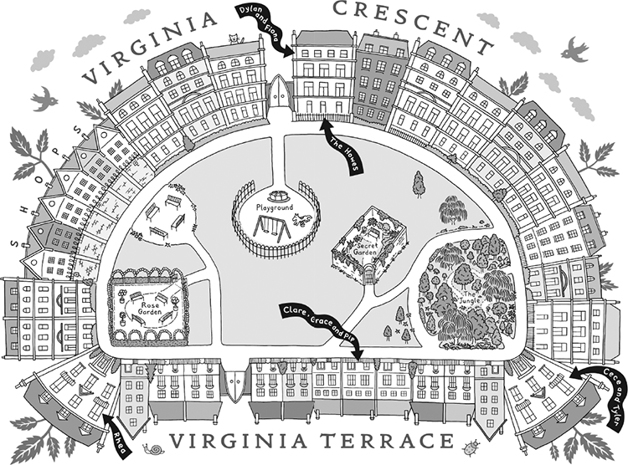 Pip stands behind her mother in the tiny bathroom. She’s not sure what to do. She’s never seen her mother being sick before.

Her mother doubles over and is sick again. She judders afterwards and rocks back on to her heels, staring up into the halogens buried in the ceiling.

Pip passes her a beaker of water. ‘Here,’ she says, ‘drink some.’

Her mother does as she is told.

Clare shudders and says, ‘Yes. I think that’s it.’ She rests the beaker of water on the floor by the toilet with shaking hands and unfolds her legs, leaning back against the side of the bath. ‘Pip,’ she says, taking her hand, ‘I am so so sorry.’

‘It does matter!’ Her mother’s words are slightly slurred. Her pale skin is waxy, her mascara smudged under her eyes. ‘It matters because I’m your mother and it is my job to look after you and how can I look after you in this state.’ She points at herself. ‘You shouldn’t have to be looking after me. You shouldn’t have to deal with anything you’ve had to deal with these past few months. You’ve been the best, most amazing girl. I don’t know what I’d do without you. I don’t.’

Her mother pulls Pip to her and holds her tight. Too tight.

‘I need to go to bed now. I have to …’ Clare gets uncertainly to her feet, holding on to the sink for balance. ‘… I have to sleep.’

The back door is still unlocked. All the lights are on. And Grace is still outdoors somewhere, roaming the communal garden with her friends. Pip resists the urge to say, ‘But what about Grace? What about me?’ She’s twelve years old. She can handle this.

Her mother stumbles from the bathroom and falls face down on to her bed. Pip pulls the duvet from under her small body and covers her properly. ‘Thank you, baby. Thank you. I love you so much. So, so much.’

Pip sits on the edge of her mother’s bed for a while, until she hears her breathing change to a sonorous bass. It is just past nine. She moves to the living room and sits there, perched uncertainly on the edge of the sofa. Beyond the back door, across the gardens, the party is still going on. She can hear it in snatches of laughter and high-pitched screams of over-excited children out long past their bedtimes. She doesn’t know what to do. She is all alone. And soon it will be dark. She phones Grace, but, unsurprisingly, her call goes straight through to voicemail. Grace has been outdoors since two o’clock and her phone will be out of charge.

Then she hears something at the back door: footsteps. She looks up, her heart racing. She sees a tall shadow move past the window. The footsteps are closer now, and suddenly there is a man standing by the door. Pip clutches her heart and hides herself behind the sofa.

She breathes a sigh of relief. It’s Leo. She goes to the door, where he stands with his golden dog, Scout. ‘Just checking on your mum,’ he says, looking behind her. ‘Is she OK?’

Pip crouches to stroke the dog, mainly because she is embarrassed to be here, alone, talking to a grown-up.

‘Are you coming back out?’ he asks. ‘The party’s still going on. Loads of kids still out there.’

He nods approvingly. ‘Fair enough,’ he says. ‘If you need anything, come to ours: we’ll all be up for a good while longer.’

Then he goes, the golden dog following behind, and disappears into the shadows of the encroaching dusk.

By ten to ten it is dark and Pip wants to go to bed. She looks in on her mother who is asleep on her back, her mouth hanging open, her arms above her head, snoring.

Pip looks out into the darkness beyond her garden gate. The party has finished but the garden is still alive. Clusters of people sit on the grass or on arrangements of folding chairs, their faces lit by storm lanterns, by candles flickering in jars, by the red embers of disposable barbecues. She needs to find Grace, so that she can lock the door and go to bed. But she doesn’t want to wander these gardens in the dark on her own, however lively they are.

The security light at the back of a neighbour’s house goes on and she sees a stream of twenty-somethings pass through the garden and back door, each holding something: rolled-up blankets, empty wine bottles, bin bags full of the detritus of a day in the sun. The sudden brightness and the wholesome chatter of her neighbours and their friends makes Pip feel brave for a second and she grabs the key to the back door and locks it behind her.

The table on their terrace is still bedecked with balloons from Grace’s birthday party earlier in the day, bobbing mournfully in the warm night breeze.

She sees children in the playground: big children. She heads towards them, hopefully. She sees faces she recognises: Leo’s older daughters, Catkin and Fern, mucking about on the swings. And Tyler and Dylan, side by side on a bench. But no Grace.

‘Have you seen Grace?’

They all look at each other and shrug. Dylan sits up straight. ‘Isn’t she at home?’

Pip feels a cold chill of dread pass down her spine. ‘No,’ she says. ‘I haven’t seen her for hours.’

‘She said she was going in,’ says Catkin. ‘About an hour ago. She must have changed her mind. Have you checked our flat? Maybe she’s hanging out with our parents?’

Pip wanders across the lawn, through the remains of the party, bunting fluttering darkly from trees, bin bags in piles ready to be removed the next morning, piles of folded chairs and dismantled gazebos stacked under trees. She can see the light from the Howeses’ garden apartment glowing from here, empty now after a day-long party, the party that she and her mother had been at earlier, where her mother had drunk too much wine and had had to excuse herself, barely able to walk in a straight line.

Then she cries out and clutches her chest when a figure appears at her side. It is Max, the football-mad loner of the garden. He’s only nine, three years younger than her. She can’t believe he’s still out here, wandering alone at this time of night. As ever he is holding his beloved football, squeezing it tight against his stomach. He looks at Pip, his eyes wide and appalled. He looks as though he’s about to say something, but no words come. He turns then and runs, down the hill, towards the lights.

Pip watches him go, feeling that something is wrong.

There is something on the brow of the hill, a strange shape emerging from the hedge that encircles the Rose Garden. She heads towards it.

As she nears the shape she can see it is a foot. She holds her breath deep inside her body and rounds the corner timorously.

The foot is attached to a person. Pip passes the beam from her mobile phone across the figure: a girl, half-undressed. Shorts yanked down to her knees, floral camisole top lifted above small naked breasts. Her hair is spread about her. Her face is a bloodied mass.

Pip drops to her knees. ‘No,’ she mutters, ‘no. No. No. No.’ She pulls Grace’s camisole down. Then she runs down the hill, runs and runs, towards the warm safe lights of the Howeses’ apartment, towards grownups, her heart thumping piston-hard in her chest.

We moved into the new flat this weekend. It’s nice. It’s on a quiet street with little houses. You walk into a narrow hallway and if you turn right there are two bedrooms. I have to share with Grace but I really don’t mind. You know I never liked sleeping on my own in the old house anyway. Not really. Do you remember? I don’t really know how much you remember about things from before. I don’t know if you’ve lost all your memories or if you’re just the same except with all the other problems.