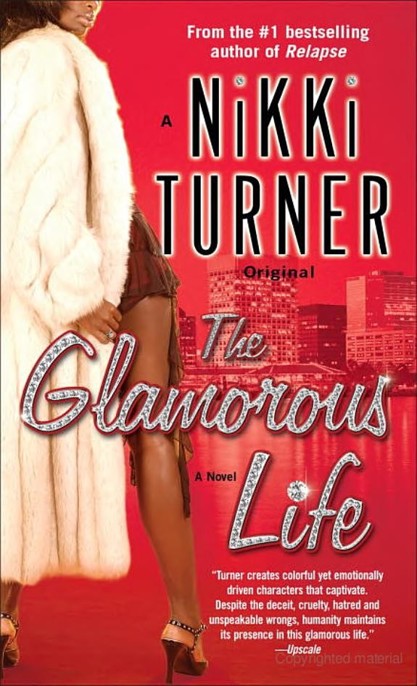 THE GAME:
SHORT STORIES ABOUT THE LIFE
(contributing author)

STREET CHRONICLES:
GIRLS IN THE GAME

CHRISTMAS IN THE HOOD
BLACK WIDOW

Chapter 3 - What’s Done in the Dark … Will Come to the Light!

Chapter 4 - He Done Messed with the Wrong One

Chapter 5 - He Done Messed with The Gig

Chapter 8 - The Predator Becomes the Prey

Chapter 9 - What Goes Around, Comes Around …

Chapter 10 - When You Least Expect It

Chapter 16 - The Freak of the Week

Chapter 20 - One Hand Washes Another

Chapter 21 - A Sucker Is Born Every Day

Chapter 22 - Birds of a Feather

Chapter 27 - Back on da Bricks

Chapter 30 - Till Death Do Us Part

Chapter 38 - The Truth Shall Set You Free

Excerpt from
Heartbreak of a Hustler’s Wife

This book is dedicated to:
The two people who make my life complete
Little Miss Kennisha Turner and Master Timmond Turner

&
To every single die-hard Nikki Turner fan.
How could I not?

I truly appreciate your loyalty and patience as I went through
the motions that the industry bestowed upon me including
changing publishers and getting rid of the typos.

Countless thank-yous for being my inspiration to continue to
keep writing and cheering me on every step of the way.

The best has yet to come!

&
To all the people whose sole purpose and existence is
to live the glamorous life.

There’s an old wise tale that says that you never
miss a good thing until it’s gone. I have been to so many
funerals and witnessed people feeling guilty, they having
to carry the heavy burden as they have reflected upon the way
they treated someone before they pass on. As I grew
and matured, I have learned never to take for granted
friendships, and the people dear to my heart, and
always try to love as if there is no tomorrow for they
could be here today and gone tomorrow.

The following people have all in one way or another,
big or small been a part of my life and although
they are
gone but they are surely never be forgotten!

CHAPTER 1
When You Look …
You Won’t Find

T
here are two kinds of girls: those who like thugs, and those who lie to themselves and think they don’t. As Bambi lay on the king-sized bed in her room, looking at a gold-framed picture of her and Reggie, she thought,
Damn I love this mother-fucka. I never felt more right about nothing in my whole life.

All of the sacrificing she had done for Reggie had finally paid off. Just a day short of their two-year anniversary it was going to be official: They could start planning the rest of their lives together, like a normal married couple.

The jangling sound of the phone caught Bambi off guard. She located it beneath her oversized terrycloth bathrobe, looked at the caller ID, and saw that it was Reggie on the line. Even his call sent chills up her spine.

Even after all of this time, the sound of Reggie’s voice still did something to her. Thinking about how good he made her feel sometimes scared Bambi a little and made her feel weak.

“Have I ever disappointed you?” she asked as she looked in the mirror and imagined how gorgeous she was going to look later—although truth be told, she didn’t look too bad even without makeup. She was dark skinned with slanted eyes, five feet seven, with long firm legs and a Coke-bottle figure. Her straight shiny coal black hair grew past her shoulders.

“Boo, straight up I don’t think you would know how, and that’s from the heart,” he said. “Anyway, I just wanted to make sure everything was a’ight.”

Bambi could sense something else in his voice. “I’m good, baby. I just need to know that you’re okay?”

“I’m good, Boo. I just had to get some shit straight. This mark-ass nigga owed me some money, and when I got over there, don’t you know this nigga came with some short money?”

“Yup, matter fact, dude was a few thousand short. Me and him got da rumbling and that bitch-ass nigga had the nerve to scratch me on my fucking neck and shit.”

“Oh, my God! Baby, are you all right?” Bambi asked. She knew he could fight, but she also knew how cruddy dudes were on the street.

“I’m a’ight, I’m just going to put some peroxide on it. This shit just got me running all behind schedule. I’m going to need you to meet me at that restaurant at the Brander Mill Inn. Don’t forget I want you to wear that sweater I had specially made for you, the N.T. Original.”

“That’s cool, and make sho it’s an hour and a half and not
two. I know you and time,” Reggie teased before hanging up the phone.

Chicks better understand that tonight is my night,
Bambi thought to herself.
This is the night my man gives it all up for me! The streets, the quick money, the dope slaying, the late nights, and the whole nine yards. He’s going to stand in a room, in front of all our friends and family, confess his love to me, slip a fat engagement ring on my finger, and look into my eyes and wait for me to say yes to him. And everybody knows I’m not going to say no. See, everybody thought I was crazy in the beginning. Not me. I knew it was love at first sight straight from jump!

T
wo years earlier Bambi had been out running errands for her mother on a hot July afternoon. Frustrated with the traffic and a “to-do” list almost a mile long, Bambi hopped off the express-way. After taking a shortcut, Bambi found herself in one of the busiest crack-slaying corners in Virginia’s capital city and smack dead in the middle of a dangerous housing project. The closest she had ever gotten to this side of town was when she visited her grandmother, who lived in one of Richmond’s oldest historic neighborhoods. When she went to Grandma’s house, it was always during daylight hours and she was never allowed to play outside. So before that day she had only seen this side of town from the highway or during News Six television crime reports. Seeing it up close, she found herself mesmerized by all the excitement going on around her.

The area was like a small village within the city. Three-story apartment buildings lined both sides of the streets, some with clothes hanging over the balcony. The once-yellow buildings were now covered with dirt and graffiti. She read the words “Boo
is a slut” and “Kiki was here” scrawled in huge letters across one wall.

The hustle and bustle of the area was a sight to see. As she sat at the stop sign, which had black writing all over it, she noticed a braiding shop to the left. Well “shop” may have been a bit of an overstatement. A girl was getting her hair braided in a black and faded gold lacquer chair on somebody’s front porch while two other girls sat waiting their turns. One swung two white plastic bags of horse hair in her hands. To the right there was another girl walking down the street in a hoochied-up outfit. The black and gold striped shorts should not have been worn by anyone but Daisy Duke on
The Dukes of Hazzard.
The short black fringes were the only thing that kept the cheeks of her butt from being visible, and an enormous amount of cleavage spilled out of her too-small halter top. The way she strutted in those platform shoes made it clear the outfit wasn’t intended for daylight.

A yellow school bus with the words “Meals on Wheels Snack Truck” was parked on the side of the street, and a crowd of children in the neighborhood were huddled around it. One guy stood at the front of the line passing Popsicles to all of the children. A grown man rode around on a child’s bike, and a woman on her knees behind a Dumpster gave a blow job to a young boy who didn’t look old enough to buy a pack of cigarettes.

Bambi took all this in as she drove. When she pulled up to a red light, a tall, skinny, light-skinned dude with a mouthful of gold teeth walked up to the car and asked, “Yo, shawdy, you looking?” He spoke slowly with a deep down-South drawl.

Bambi looked him over, from head to toe. She knew she should have been afraid; but he was very handsome, and the whole atmosphere kind of excited her.

“Do I look like a mother-fucking junkie?” she asked, knowing
good and well that he was a drug dealer, and she wanted him to know that she was hip.

The dude answered, “Nah, shawdy, I wasn’t asking if you was looking for no drugs, I was asking was you looking for me?”

Bambi looked him up and down again like he was crazy and said with as much attitude and spunk as she could, “Nooo, I wasn’t looking for you either. And I would have thought a dude thinking himself as cool as you think you are could have or would have come at me with a better line than that one.”

He nodded his head and smiled. “Well, they say when you ain’t looking, you find. And sometimes it ain’t the line, it’s the nigga’s style that attracts.”

Bambi tried to hide the little smirk on her face, but she was enjoying his come-on and he knew it.

Just then a Datsun with what sounded like a hole in the muffler rolled up beside them. A toothless, scary-looking lady with the short of a cigarette in her hand hung her head out the window. She had no shame in her game.

“Yo Reddggie,” she slurred as slobber ran out of her mouth. “I got seven dollars, can you work wit that?”

“Hold on, I’m coming. Just pull over there and cut that loud-ass car off before you make this block hotter than this shit already is,” Reggie responded.

Bambi gave him a look, saying nothing. Reggie could sense her awkwardness, but before he could smooth over what had just taken place, two dudes rode up on a bicycle: one was pedaling and the other was on the handlebars.

“Reggie, man, we struggling badder than I don’t know what. Look, we ain’t got but twelve dollars in quarters, can you look out real decent for us?” the rider on the handlebars asked.

Ruby's Wish by Shirin Yim
True North (The Bears of Blackrock Book 4) by Michaela Wright, Alana Hart
Doctor Who: Marco Polo by John Lucarotti
Amuse Bouche by Anthony Bidulka
No Turning Back (Man-Maid) by Rainey, Anne
The Summer of Sir Lancelot by Gordon, Richard
Escape by Scott, Jasper
Out of Promises by Simon Leigh
Gold From Crete by C.S. Forester
The Gladiator's Touch by Hawkeye, Lauren