Read The Good Spy: The Life and Death of Robert Ames Online

The Good Spy: The Life and Death of Robert Ames 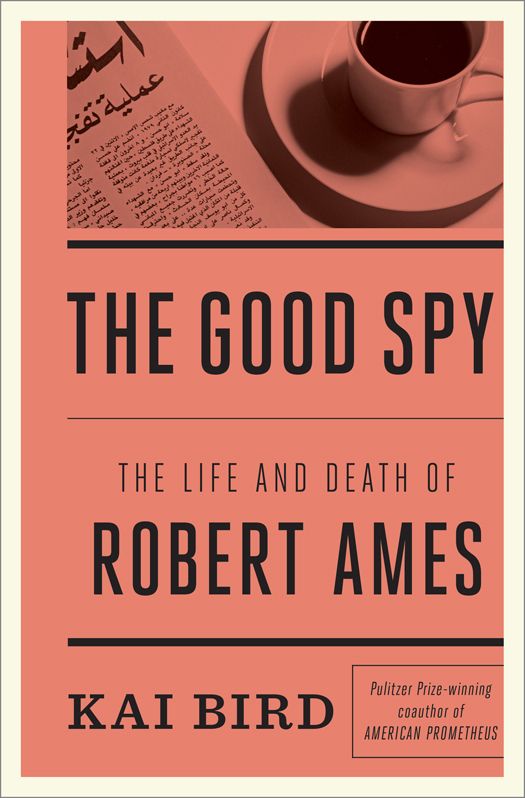 The Chairman: John J. McCloy; The Making of the American Establishment
(1992)

The Color of Truth: McGeorge Bundy and William Bundy; Brothers in Arms
(1998)

Hiroshima’s Shadow: Writings on the Denial of History and the Smithsonian Controversy
(coedited with Lawrence Lifschultz, 1998)

CROWN and the Crown colophon are registered trademarks of Random House LLC.

AND FOR YVONNE AMES
,
who lost the father of her six children in Beirut
.

Prologue
1 The Making of a Spy
2 The Agency
3 Arabia
4 Aden and Beirut
5 The Red Prince
6 Secret Diplomacy
7 Headquarters, 1975–79
8 The Assassination
9 The Ayatollahs
10 Jimmy Carter and Hostage America
11 Bill Casey and Ronald Reagan
12 Beirut Destiny
13 The Enigma of Imad Mughniyeh

When I began the research for this book, I visited the CIA’s headquarters in Langley, Virginia, and met with George Little, then head of the Agency’s Office of Public Affairs. We met for exactly one hour: I did most of the talking, trying to describe the kind of book I hoped to write about Robert Ames. I also explained that I would welcome the opportunity to sit down with one of the CIA’s in-house historians and check basic facts about Ames’s career. I was hoping that the CIA would declassify some materials related to Ames and his work in the Middle East. Mr. Little eagerly expressed the hope that the Agency would be able to give me some kind of limited assistance. But after repeated requests in the months and years to come, I never heard back from the Agency. CIA directors Leon Panetta and David Petraeus never replied to my e-mails. So I wrote this book without the cooperation of anyone inside the CIA.

Fortunately, I found more than forty retired officers, both clandestine officers from the Directorate of Operations and analytical officers from the Directorate of Intelligence, who generously shared their memories of Bob Ames. Some of these individuals were willing to speak for the record, but many spoke not for attribution. I have given aliases to those sources who did not want to be named. These aliases
appear in the narrative in italics. This is also the case for a number of retired Mossad officers who agreed to be interviewed.

I knew Bob Ames when I was an adolescent. He and his wife, Yvonne, were our next-door neighbors from 1962 to 1965 in the small U.S. consulate compound in Dhahran, Saudi Arabia. So I have vivid memories of this tall, handsome young man who liked to play basketball with the consulate’s squad of U.S. marine guards. I was unaware at the time that Bob was a CIA clandestine officer. I thought he was just another Foreign Service officer, like my father. Decades later, I approached Yvonne to say that I was writing a biography of her late husband; she remembered me. And though she’d never spoken to a reporter about her husband’s life, she graciously agreed to talk and to share her small collection of photographs, correspondence, and a family scrapbook.

I also found a few declassified documents in the National Archives and the Ronald Reagan Presidential Library pertaining to Ames. But most of this book is based on interviews in Washington, D.C., Beirut, Amman, Tel Aviv, and Jerusalem. I wrote it in Barranco, a suburb of Lima, Peru.

Yvonne Blakely Ames:
The wife of Bob Ames and mother of his six children.

Frank Anderson:
Chief of the Near East and South Asia Division of the CIA’s Directorate of Operations.

Bashir Gemayel:
A Maronite Christian warlord and president-elect of Lebanon.

Kenneth Haas:
The CIA station chief in Beirut. Haas had a Ph.D. in philosophy from Syracuse University.

Deborah Hixon:
A thirty-year-old CIA officer in Beirut on a temporary-duty assignment.

James F. Lewis:
The deputy CIA station chief in Beirut. He was the last POW released from a North Vietnamese prison, in October 1975.

Monique Nuet Lewis:
A Vietnamese-born, naturalized American citizen. She was the wife of James Lewis. Monday, April 18, 1983, was her first day on the job as a CIA administrative officer.

Henry Miller-Jones:
A CIA officer who served with Ames in Aden and Beirut.

Imad Mughniyeh:
A Shi’ite Lebanese, recruited by Ali Hassan Salameh into the PLO’s Force 17 and later associated with a long list of kidnappings, air hijackings, and car bombings.

Stuart H. (“Stu”) Newberger:
A senior partner at Crowell & Moring, a Washington-based law firm, who has pioneered civil suits on behalf of victims of international terrorism.

“Espionage, properly conducted, never announces itself. ‘Stolen’ information remains in its accustomed place; the ‘spy’ is a trusted civil servant; the spymaster betrays no sign of special knowledge.”

—Thomas Powers,
The Man Who Kept the Secrets

It was a bright blue, cloudless September day in Washington, D.C., a day of hope for the peoples of the Middle East after decades of cyclical wars, massacres, and spectacular acts of terrorism. But Frank Anderson—the Central Intelligence Agency’s ranking clandestine officer in the Arab world—was nevertheless somehow annoyed that morning. He knew something extraordinarily good was about to happen. At fifty-one, Anderson had spent half his life working on the Middle East. After joining the CIA in 1968, Anderson had risen rapidly in the ranks of the Agency’s clandestine services, learning Arabic in Beirut and specializing in the war-torn Middle East. By 1993, he was chief of the Near East and South Asia Division of the CIA’s Directorate of Operations. That morning he had every reason to believe that peace was finally coming to a region to which he had dedicated his entire career. He should have felt elated, but he was quietly miffed.

Israeli prime minister Yitzhak Rabin and Yasir Arafat, the chairman of the Palestine Liberation Organization, were about to sign a peace accord at the White House. President Bill Clinton had invited three thousand people to witness the historic moment on the South Lawn
of the White House—and Anderson suspected that not a single CIA officer had been invited. Anderson thought that was wrong. Someone in the White House had forgotten how this peace process had started as an intelligence operation. Anderson believed the CIA, through its careful cultivation of clandestine sources, had created the opportunity for the Oslo Accords, which were to be signed that morning. He knew it had all started decades earlier when a young CIA officer named Robert Clayton Ames had cultivated the first highly secret contacts between the United States and the Palestinians. Ames had paved the way for the peace accords—and for his dedication to his spy craft and his work as an intelligence officer, he’d been murdered in Beirut on April 18, 1983, in the first truck-bomb assault on a U.S. embassy. He had happened to be in the wrong place at the wrong time. The horrifying attack had killed sixteen other Americans—including seven other CIA officers—and forty-six Lebanese civilians. Anderson thought that on this special day someone should remember what Ames had done for the peace process.

Sex Addict by Brooke Blaine, Ella Frank
Ardor by Lily Prior
Her Special Charm by Marie Ferrarella
Pure Heat by M. L. Buchman
Dreams of Fire and Gods 2: Fire by James Erich
Bound By Blood: (The Betrayed Series Book 2) by Victoria Renteria
When We Were the Kennedys by Monica Wood
Adapt and Overcome (The Maxwell Saga) by Grant, Peter
Steam Dogs by Sharon Joss
Living Stones by Johnson, Lloyd