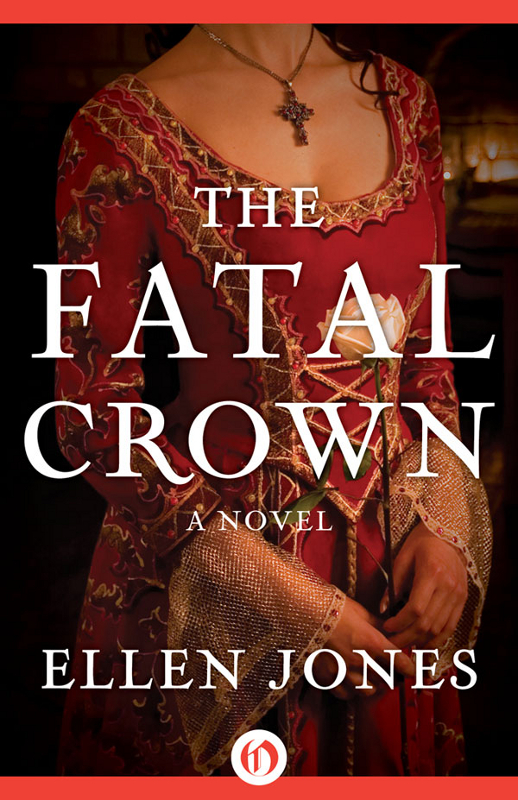 THEIR PASSION WOULD TEAR A KINGDOM ASUNDER
It was a time of breathtaking pageantry --- of treachery and unbridled ambition --- when an aging King Henry I sowed the seeds of unrest and civil war throughout the land by naming his daughter, Maud, heir to the coveted throne of England. Beautiful and headstrong, she vowed never to relinquish the crown that was rightfully hers --- defying the powerful forces that aligned against her and behind her golden-haired cousin, Stephen of Blois, Maud's most dangerous rival . . . and her secret lover.

LUST FOR POWER WOULD TEST THEIR LOVE
Both proud and willful, with the blood of William the Conqueror surging through their veins, the magnificent passion of Maud and Stephen would war with their separate, unquenchable thirsts for sovereignty --- yet a bold, breathless and forbidden love would miraculously endure the raging fires of history.

I
N THE EARLY MIDDLE
ages in England succession was not hereditary. Conquest, descent, and the agreement of the feudal lords all played their part in determining who gained the royal title; for a century before the story opens the crown had usually been seized by armed force.

In 1066 Duke William Bastard sailed from Normandy to England, defeated the Saxon king, Harold, at the Battle of Hastings, and claimed the English crown by right of conquest.

In 1087, King William I died, to be succeeded in England by his second son, William Rufus, and in Normandy by his eldest son, Robert. His youngest son, Henry, was left silver but no land. Although Robert, Duke of Normandy, fought his brother, William, for the English crown, he was unsuccessful.

In 1100, King William Rufus was killed in a hunting accident under questionable circumstances. His elder brother, Robert, was away on the First Crusade, and the throne was seized without opposition by his younger brother, Henry. Despite rumors that Henry was an accessory to his brother’s death, had even arranged it, nothing was ever proved. Nine centuries later historians still debate the issue. As one noted British historian, Christopher Brooke, summed it up: If William Rufus’s death in August 1100 was an accident, Henry I was an exceptionally lucky man.*

In 1106 Henry invaded Normandy, defeated his eldest brother, Robert, then imprisoned him for life, thus becoming Duke of Normandy as well as King of England as his father had been.

Henry married a Scottish princess, Matilda, of the old royal Saxon line, and by her had three children. One died in infancy; the other two, twins, a boy and girl, survived. Henry I begat numerous bastards but the twins, descended through the male line of William the Conqueror, remained his only legitimate children. His son, William, was named heir to the English throne and the Duchy of Normandy. But in the event that anything should happen to him, who then would rule?

T
HIS TALE IS A
work of fiction set against the backdrop of history. The characters, with few exceptions, are real and have their places in history. Many of the incidents depicted actually occurred; others, based on rumor and gossip, have no basis in historical fact. The chronology of events in the twelfth century often varies from chronicler to chronicler. In order to facilitate the pace of the story, I have taken my own liberties with dates, locations, and the nature of the event.

MAUD,
daughter of Henry I

HENRY I
,
King of England and Duke of Normandy, youngest
s
on of William the Conqueror

ADELICIA OF LOUVAIN,
second wife to Henry I

ROBERT,
Earl of Gloucester, bastard son of Henry I

WILLIAM AND PHILLIP,
two of their sons

STEPHEN,
third son of Adela, daughter of William the Conqueror

GEOFFREY,
Count of Anjou and Maine

BRIAN FITZCOUNT,
Lord of Wallingford, bastard son of the Count of Brittany

PEERS OF THE CHURCH

ROGER,
Bishop of Salisbury, Chief Administrator to Henry I

THEOBALD OF BEC,
an Archbishop of Canterbury

WILLIAM OF CORBEIL,
an Archbishop of Canterbury

Our fatal acts our angels are, or good or ill,

Our fatal shadows that walk by us still.

The Normans are a turbulent race and, unless restrained by a firm government, are always ready for mischief. They are eager for rebellion, ripe for tumults, and alert for every sort of crime.

All things to nothingness descend,

Grow old and die and meet their end;

Nor long shall any name resound

Beyond the grave, unless ’t be found

In some clerk’s book; it is the pen

Chronicle of the Norman Dukes

A
FTER A MONTH’S JOURNEY
across Europe, the royal procession of litters, sumpter horses, and carts finally arrived at the King’s camp in Normandy. Maud stepped from her litter into a lush green meadow and looked curiously about her. From this land, she realized, her grandfather, William, called the Conqueror, had set sail for England fifty-nine years ago. Her eyes passed across a narrow strip of river to the opposite shore. Through the early morning mist she could make out an array of brightly colored pavilions. Surrounded by a profusion of knights, archers, and squires, a scarlet tent, larger than the rest, boasted a red-and-gold banner blowing arrogantly in the autumn wind: the standard of her father, Henry, King of England and Duke of Normandy.

With slender jeweled fingers Maud slipped off the hood of her black mourning cloak. Mingled rage and apprehension coiled like twin snakes in the pit of her belly. She had been sent from her father’s court when she was nine years old, to be the bride of the Holy Roman Emperor of Germany. Now, fourteen years later, the Emperor was dead, and she had been summoned by her father, against her will, to return to his domains. As she stared fixedly at the King’s pavilion, Maud knew that the determination of her fate lay behind those scarlet walls.

Startled by the sound of hooves ringing on stone, Maud turned to see a party of richly dressed nobles riding smartly across the arched stone bridge that spanned the river. They must be headed for the King’s camp, she thought, to meet her. Assaulted by a terrible sense of futility, the impulse to weep, to succumb to despair, was almost overpowering. No, Maud thought fiercely, she would not, must not, show the slightest sign of weakness. No one must suspect how lost and vulnerable she felt, how much she dreaded this meeting with her father, a virtual stranger, whom she had not seen since she was a child.

The sound of a splash, followed by a sudden movement in the clump of green reeds growing by the river, caught her attention. Her eyes searched the bank but could see nothing. An intimation of danger, a tiny ripple of alarm, passed through her. Was it her imagination or did someone lie hidden in the reeds observing her? She knew she should return to the tent and prepare for the upcoming meeting with her father, but she found herself impelled toward the clump of reeds.