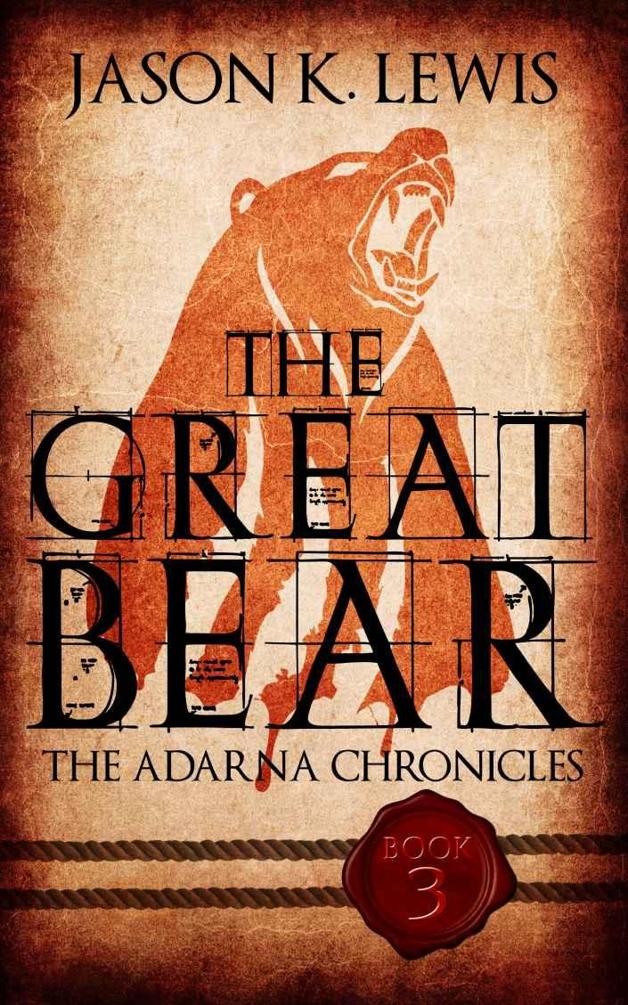 The rights of Jason K. Lewis to be identified as the author of this work have been asserted in accordance with the Copyright, Designs and Patents Act 1988. All rights reserved.

This book or any portion thereof may not be reproduced or used in any manner whatsoever without the express written permission of the publisher except for the use of brief quotations in reviews or articles.

This book is a work of fiction. The names, characters, places and incidents are products of the author’s imagination and are not to be construed as real. Any resemblance to persons, living or dead, actual events, locations or organisations is entirely coincidental.

For my beautiful wife and son, as always.

Also for all the fans and fellow authors who have offered support and advice, you know who you are!

Reason and judgment are the qualities of

You make your own luck, most of the time.

Thinking a task impossible does not mean

one should not attempt it.

SWEAT DRIPPED FROM ELISSA’S forehead. Her arms ached. Her body was a mass of dull, throbbing pain, but she continued nonetheless. The sword in her hand weighed two and a half pounds – she knew this because her father had told her it was so – not that heavy, really. She wished she still believed it.

“It’s really light!” she had exclaimed in surprise the first time she had sparring practice with her father. She had watched Ursus and Accipiter being trained from an early age. Elissa had been determined she would not be left behind, had insisted that she be trained in weapons handling too.

Martius had smiled the special smile that she knew he reserved for her alone, an indulgent smile, perhaps. “It’s supposed to be light, Lissa. Just try wielding it for five minutes and tell me how you feel about it then.”

Elissa had been fourteen at the time, newly flowered to womanhood and fiery with it as new passions awoke. “Isn’t it supposed to be heavy so that it can cut into people?” She’d felt sick at the thought of actually cutting someone, but wanted desperately to impress her father, to prove that she was the equal of her brothers. They were younger, after all, just babies, really.

Martius had shaken his head, whipping his own sword through the air in effortless arcs. “It’s a fine balance. What you need ideally is a blade that is sharp, because that is the bit that does the cutting. You would be amazed how little effort is needed to kill with a sharp blade.” A frown creased Martius’s forehead and he paused, fixing Elissa with a stare, his lips pursed. “The point is the blade has to be strong, light and sharp.” He turned and flung his sword at a wooden practice dummy where it stuck with a satisfying thunk, the pommel quivering with pent-up energy.

“Of course, balance is always key as well.” Martius straightened his tunic and looked down at his daughter with a twinkle in his eyes. “The pommel needs to balance the weight of the blade, otherwise the tip is heavier than the grip.”

Elissa stood stock still for a moment, eyes wide, flicking from the quivering blade to her father and back again. “That was amazing, Daddy...”

Martius shrugged. “They are difficult to throw when they are perfectly balanced. You want a sword with a weighted blade, really, so that it flies true.” Martius patted her gently on the head, a sign of affection that she still wished he would abandon. He smiled awkwardly when he noticed her pained expression. “I know, don’t tell me, you are a big girl now, I remember.” He smiled his true smile again. “You will always be my little girl though, Lissa. Do not forget that.”

Her ire eventually softened as it always did. She could not stay annoyed at him. He radiated such warmth. She looked again at the blade; it still seemed to shake with pent-up energy. “That was amazing...”

Felix Martius smirked and raised an eyebrow. “I should hope so too! I have been practising it for thirty years now, and I still miss half the time...”

That first day of sparring was years ago now, but somehow it had become one of Elissa’s most treasured memories, perhaps because, in her mind, it marked her father’s acceptance of her as an equal to her brothers. After a few weeks with her father and brothers, satisfied that she was doing at least as well as Ursus and Accipiter, Elissa had allowed her training to lapse. She preferred the bow in any case – or so she had justified the decision – and was, according to her father, an excellent shot.

She swung again at the practice dummy. Her blade barely scratched the surface.
I’m not strong enough.

“Perhaps we should stop now, young miss,” said Andiss, his voice low and reassuring. “We can practice again tomorrow.”

Elissa let the blade tip drop. Her body screamed at her to relent, to give in to the exhaustion.

Andiss stood, relaxed and balanced as ever, a solid bulwark – as were all of her father’s men. She thought of Darcus then, poor loyal Darcus, gone now to await judgement before the dark god. Darcus died trying to defend her family, he would go to paradise for his noble sacrifice, Elissa was sure of it. A more loyal servant never existed. Tears welled up. Her chest began to tighten, but she fought the rising tide of emotion; buried it.
I will not be weak
.

She looked down into the courtyard, bustling now with troops. It felt like the townhouse was more a barracks than a family home.

She raised her arm and drove the sword into the practice dummy. She wanted to leave it quivering in place – as her father would have done – but it barely seemed to pierce the surface and she had to keep hold of it to stop it from clattering to the floor. Finally, she withdrew the blade and let her sword arm drop back down. It felt like the weight of the world hung from the weapon’s tip.

“We should stop for the day, miss,” Andiss rumbled insistently. “Tomorrow we can practice riposte some more.”

Andiss shifted his weight. His brows drew down into a frown. “Yes, ma’am,” he said, “I miss him very much. He was a good man, treated us that worked for him well… Always did.” Andiss looked at his feet, then down to the tents in the courtyard below. “Perhaps we should stop for the day, miss. It is past time for luncheon.” He said the words absently, as if he did not really mean them.

“How long did you know him?”

Andiss looked across the courtyard towards the kitchens, perhaps wondering how to convince her to eat. “Many years, miss. He was cohort commander to me and Dexus. That’s how we followed him into service with the general when we had done our terms, miss. It was him as put in a good word for us.” His gaze returned to his feet and his shoulders hunched down.

She gave in to her grief then and the dark swell of emotion rose and broke over her. A tear rolled down her cheek. “I miss him too, Andiss. We... we would have gone shopping today as we always did. Once a week, every week, with my mother. We always used to laugh at him carrying all our shopping; we weighed him down like a mule sometimes.” At the thought of her mother, tears spilled freely down her cheeks. They fell to the uncaring oak planks of the veranda. “But now they’re both gone.”

Andiss shifted awkwardly. “Lady Ellasand is not gone miss. You must not talk so. General Martius said the doctore says she will soon wake.” He looked across the courtyard to the room Ellasand lay in. “It will just take time...”

She walked slowly to the weapon stand and placed the sword in its slot. It clunked with terrible finality as it slid into place. She wiped the tears from her face and sniffed.
Blow your nose
, her mother would have chided her,
do not sniffle, it isn’t lady-like
. She wondered to the balustrade and grasped it with both hands. Her blisters stung but she gripped all the harder for it.

In the courtyard down below, her father’s troops bustled around as always. Her cousin, Metrotis, appeared to be engaged in a fencing match with a young officer, and she took hope from the fact that she was, at least, better than someone.

Her attention fixed on the young legion father, Conlan, as he moved gracefully through the small camp below. Elissa had first seen him on the night of the attack, when he led his men to garrison the townhouse. He had seemed so calm to her, so professional, checking every room, tending to the wounded and the dead. He seemed to be everywhere at once that night. He had even taken the time to introduce himself to her, as the morning sun began to rise.

“Do not worry, Lady Elissa,” Conlan had said. “Your father and the Third are here now. You are safe.” And with that he had turned and moved away to see to the preparations and the strengthening of the townhouse’s defences. Elissa, unused to the attentions of men his age, had blushed and mumbled thanks to his back as he strode away.

Ever since the night of the attack, the one thing that she looked forward to each morning was the chance to catch sight of him. There was something in the way that he moved his hips. He walked with a confidence that she had seen in few men except for her father.
Safe
, that had to be the explanation,
he makes you feel safe
.

Without warning, Conlan glanced up at her from the courtyard and caught her eye. His face was stern and serious. He paused for a moment, then nodded a brief greeting and moved on about his business.

Her footsteps took her down the stairs and along the lower veranda instead.
I must look terrible
;
perhaps I should take a bath and put on a dress.
It would certainly be cooler than the leather trousers and thick woollen shirt she wore for sword practice. But a vision of her mother’s face drifted before her eyes and she knew that she would instead visit the Lady Ellasand – tended as ever by Doctore Nessius in the room above – this afternoon.

Fated to be Yours by Jodie Larson
Carry Me Home by Sandra Kring
Mighty Men with Weapons by Addison Avery
The Tiger's Mate: (Book 12, Grey Wolf Pack Romance Novellas) by E A Price
Fionavar 1 by The Summer Tree
Phantoms of Breslau by Marek Krajewski
Just About Sex by Ann Christopher
Undead and Done by MaryJanice Davidson
Towering by Flinn, Alex
Pretty Dead by Francesca Lia Block