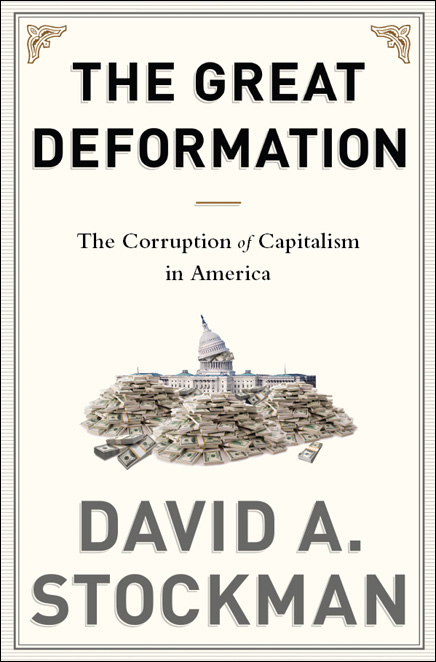 THE CORRUPTION OF
CAPITALISM IN AMERICA

Published in the United States by PublicAffairsâ ¢, a Member of the Perseus Books Group

No part of this book may be reproduced in any manner whatsoever without written permission except in the case of brief quotations embodied in critical articles and reviews. For information, address PublicAffairs, 250 West 57th Street, 15th Floor, New York, NY 10107.

Library of Congress Cataloging-in-Publication Data is available for this book.

To my daughters, Rachel and Victoria,
whose future inspired me to start this book,
and my wife, Jennifer,
whose patience and loving support
enabled me to complete it.

PART I
THE BLACKBERRY PANIC OF 2008

23
Â Â Â Â
The Rant That Shook the Eccles Building: How the Fed Got Cramer'd

PART V
SUNDOWN IN AMERICA:
THE END OF FREE MARKETS AND DEMOCRACY

30
Â Â Â Â
The End of Free Markets: The Rampages of Crony Capitalism in the Auto Belt

33
Â Â Â Â
Sundown in America: The State-Wreck Ahead

34
Â Â Â Â
Another Road That Could Be Taken

Less than two weeks before
The Great Deformation
went to press, the powers that be in Washington pulled off a “deal” that allegedly stopped the country from going over the fiscal cliff. What they did, in fact, was to permanently add nearly $5 trillion to Federal deficits over the next ten years, ensuring that the national debt will continue to surge higher and that Washington will become strangled even more deeply in a fatal paralysis of governance.

In truth, the fiscal cliff is permanent and insurmountable. It stands at the edge of a $20 trillion abyss of deficits over the next decade. And this estimation is conservative, based on sober economic assumptions and the dug-in tax and spending positions of the two parties, both powerfully abetted by lobbies and special interests which fight for every paragraph of loophole ridden tax code and each line of a grossly bloated budget.

Fiscal cliffs as far as the eye can see are the deeply troubling outcome of the Great Deformation. They are the result of capture of the state, especially its central bank, the Federal Reserve, by crony capitalist forces deeply inimical to free markets and democracy.

Why we are mired in this virtually unsolvable problem is the reason I wrote this book. It originated in my being flabbergasted when the Republican White House in September 2008 proposed the $700 billion TARP bailout of Wall Street. When the courageous House Republicans who voted it down were forced to walk the plank a second time in betrayal of their principled stand, my sense of disbelief turned into a not-inconsiderable outrage. Likewise, I was shocked to read of the blatant deal making, bribing, and bullying of the troubled big banks being conducted out of the treasury secretary's office, as if it were the M&A department of Goldman Sachs.

Most important, I had been an amateur historian on the matter of twentieth-century fiscal and monetary history, perhaps owing to my years on Capitol Hill and in the Reagan White House when they were embroiled in these topics. In fact, prior to my Washington years, while hiding out from the draft at Harvard Divinity School in 1968â1970, I had taken up serious study of the New Deal under the era's great historian Frank Freidel, and had continued the inquiry ever since. So when Fed chairman Bernanke began
running around Washington shouting that the Great Depression 2.0 was at hand, I smelled a rat.

Then, when the Fed's fire hoses started spraying an alphabet soup of liquidity injections in every direction, and its balance sheet grew by $1.3 trillion in just thirteen weeks compared to $850 billion during its first ninety-four years, I became convinced that the Fed was flying by the seat of its pants, making it up as it went along. It was evident that its aim was to stop the hissy fit on Wall Street, and that the threat of a Great Depression 2.0 was just a cover story for a panicked spree of money printing that exceeded any other episode in recorded human history.

At length, the sweaty visage of Treasury Secretary Hank Paulson appeared on the TV screen yet again, this time announcing that Washington was writing a $13 billion check to bail out General Motors. That's where I lost it. I had spent the two decades since I left the White House on Wall Street in the leveraged buyout business, and at that moment I was laid up on the injured reserve list because of my own fiery mishap in Detroit. I had organized, financed, and partially owned a $4 billion auto parts supplier that I had imprudently loaded up with massive amounts of debt, and which had then been crushed by the bumbling corporate bureaucrats at GM (and Chrysler) ahead of their own crash landing.

As a consequence of my Detroit experience, I was in the midst of proving to a US prosecutor that my company's bankruptcy was due to leverage and stupidity (mine), not fraud. But three years of fighting an indictment concentrates the mind, and by then I knew one thing for certain: the Detroit-based auto industry was a debt-enfeebled house of cards that had been a Wall Street playpen of deal making and LBOs for years, including my own; it needed nothing so much as a cold bath of free market house cleaning, along with a drastic rollback of the preposterous $100,000 per year cost of UAW jobs.

CRO-MAGNON by Robert Stimson
Cane by Jean Toomer
Dragonfly by Leigh Talbert Moore
A Crying Shame by William W. Johnstone
Black Sheep by Susan Hill
The Davonshire Series 2: Loving Words by Olivia Gaines
Run with the Moon by Bailey Bradford
I Sweep the Sun Off Rooftops by Hanan Al-Shaykh
Queen of the North (Book 3) (Songs of the Scorpion) by James A. West
Clarissa Harlowe: Or, the History of a Young Lady, Volume 8 by Samuel Richardson