The Greater Challenge Beyond (The Southern Continent Series Book 3) 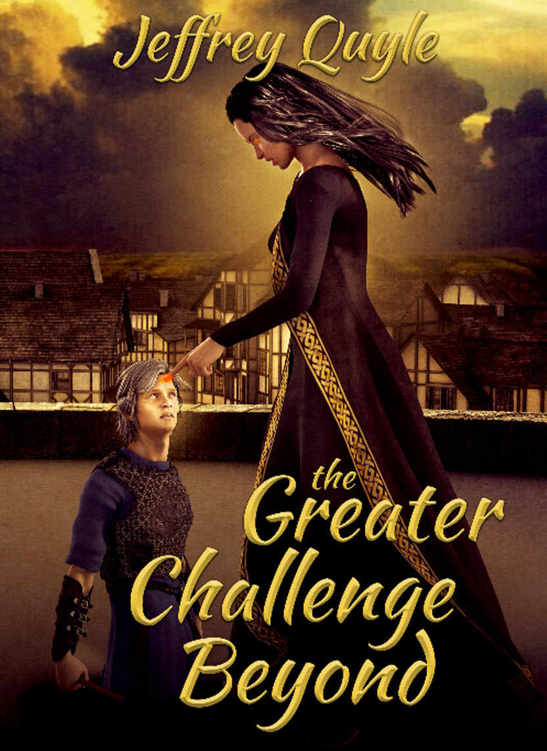 Men and women screamed, shrieked, and fainted, as the room was filled with a whiff of sulfurous air, and the goddess of punishment slowly stepped in a tight circle, letting her gaze fall upon everyone who was in the room.

“You are not placed on this earth to interfere with the work of the champion of the gods,” her voice was a seductive rumble, as she finished her survey and faced Baron Holmgren.  The man’s white face had turned gray with fear.

“The boy and how he plays with his women is none of your concern,” she lectured him.

Grange felt anger building in his veins.  He had an active dislike for the goddess, for her very nature, for her practices, for her temples, and especially for how she had treated him personally.  He eyed her carefully, ready to see her whip around and try to dole out more punishment to him.

“For interfering with the champion, I am here to punish you,” she pointed a finger at the nobleman, and a jet of fire shot forth, enveloping the man in flame.  More people in the room screamed.

“No!” Grange shouted, horrified by the sight.  He pulled his wand free and pointed it at Holmgren.  “Water!” he commanded, and a jet of pure water shot forth, striking the fiery man with such force that it knocked him over as it extinguished the flames.

Those who were in the room gasped at the sight of the sudden encounter, and at the temerity of Grange to reverse the punishment doled out by the goddess.

“You impudent, undeserving, arrogant, overvalued piece of dirt!” Shaine screamed at Grange as she whirled to look at him.

“Maybe we don’t need to keep you as champion.  I’m sure that somewhere out there we can find one other person with your peculiar talents,” she growled as she started to stalk towards him.

3. The Loss of Power

For more information, visit the Ingenairii Series on Facebook,
www.facebook.com/ingenairiiseries

The Greater Challenge Beyond

Halsten, Magnus’s heir to the throne

Elred, priest at temple of Acton

Ralax, God of parties and festivals

Grange has led an unbelievable life, in just the past year.

He was an orphan and a pickpocket, an obscure minor criminal in the tyrannical city of Fortune, capital of the kingdom of Verdant, when a treacherous companion turned him over to the authorities.

He was punished beyond all sense of justice, and sent into exile to work in a mountain labor camp, digging a tunnel that could never be completed.

But in the course of his degrading work, he found a set of magical jewels, sentient, crystalline embodiments of energy and power.  The jewels attached themselves to him spiritually and physically, taking him under their guidance, with a purpose of teaching and training him to become capable of fighting demons.

The jewels warned of an approaching invasion of demons, a periodic attempt by the dark forces to overwhelm earth and all its inhabitants.  They told a disbelieving Grange that he was destined to be the leader of humanity’s efforts to resist the demons.

The jewels found Grange wanting in many aspects of battle knowledge and leadership, and they set out to train him, according to what they thought best.  He slowly became proficient in some of the arts of war.

Grange also practiced his own preferred art, the art of music.  He wandered through the lands outside of Verdant and came to settle in the nation of Palmland, a benevolent monarchy, where he played the flute in a musical group.

His life underwent a decided change when he came to the attention of the wizard of the court of Palmland, after he survived a mass attack by a gang of demons.  Brieed, the resident court wizard, took Grange under his wing, and assigned the wizard apprentice Grace to help Grange learn how to be a wizard.

Grange found Grace to be a contradiction – helpful, abrasive, musical, jealous, insecure.  But his work with her proved that the two of them were destined to be partners in learning the ways of wizardry and the world.

Grange traveled on behalf of Palmland to visit the land of Kilau, where he served as part of an ambassador’s party negotiating a treaty.  While at Kilau, where he was joined by Grace, he produced magical activities that helped cement a treaty between the two kingdoms.

One thing led to another though, and Grange found himself traveling to the arctic south, helping a rescue expedition reach a distant mine in the forsaken mountains where evil was reported to exist.  He helped the expedition achieve its goal, but then he was ambushed afterwards, and forced to battle a strong demon.

The demon inflicted a terrible defeat upon Grange, killing the elemental jewels by using the power stored in Grange’s own wand.  Though Grange killed the demon in the end, he was devastated by the loss of his companions.

Grange wandered in the frozen wilderness until nearly dead.  He was found by an adventure-seeking princess from the distant, barbaric land of Southgar.  The people of Southgar had the same appearances as Grange, pale white skin, white hair, thin facial features.

Grange’s memories were destroyed by water from a mineral spring, and he traveled uneasily with the Southgar travelers.  But when the party was attacked by demons, Grange’s battling skills rose to the surface, and he fought well enough to save the princess and himself from death.

“So you are a princess?” Grange asked Jenniline after they both awoke around noon.  He found Jenniline bent over his injured leg, using strips of cloth to bind his sliced flesh wound closed.

“Me and a half-dozen others,” she muttered as she tightened the cloth strip.  She suddenly bent low, and Grange was uncertain what her intentions were.

“What are you doing?” he asked.

She lowered her mouth towards his flesh, and she put one end of the cloth strip between her teeth, then pulled it tight as her fingers held the other end, creating enough pressure so that Grange could feel the gaping wound in his flesh close slightly.  Then Jenniline’s fingers tied the strip in a knot, she released the hold with her teeth, and raised her head.