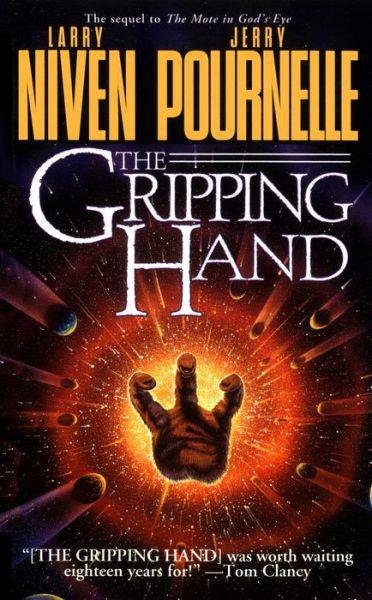 For Marilyn and Roberta, those most patient of ladies

HIS EXCELLENCY HORACE HUSSEIN BURY
, Imperial Trader and Magnate; Chairman of the Board, Imperial Autonetics, Ltd. and owner of the yacht
Sinbad

JOCK
Motie ambassadors to the Empire, representing the Mote

THE HONORABLE FREDERICK TOWNSEND, owner and master of the yacht
Hecate

I would not spend another such a night Though 'twere to buy a world of happy days, So full of dismal terror was the time!

O God! I could be bounded in a nutshell, and count myself a king of infinite space, were it not that I have bad dreams.

A severed head spun across black sky. He had been a Marine: square jaw, close-cropped blond hair, glittering dead eyes. The slack mouth tried to speak. "Tell them," it said. "Stop them." Vacuum made its skin puffy, and blood made frozen bubbles on the thick neck. "Wake them. Wake them up. Mr. Bury, sir, wake up," it said urgently. The sky swarmed with small six-limbed shapes. They thrashed in the vacuum, found their balance, and swam toward him, past him, toward the battleship
Lenin
. Vacuum swallowed his scream. "Wake up," they chittered at him. "Please, Excellency, you must wake up."

His Excellency, Horace Hussein Al-Shamlan Bury, Trader and Magnate, jerked and twitched and was sitting upright. He shook his head and forced his eyes open.

The small, dark man was standing a safe distance away. Bury said, "Nabil. What time is it?"

"It's two in the morning, Excellency. Mr. Renner insisted. He said to tell you, 'The gripping hand.' "

Bury blinked. "Is he drunk?"

"Very. I woke Cynthia. She's making espresso for him. I made him take vitamins and drink some water. He was attacked outside the house. We killed all three, Excellency."

"Careless." So: three corpses. At least Renner had some excuse for waking him.

"Mr. Renner was drunk and I was asleep when the alarms rang," Nabil apologized. "Sir, they were using firearms."

"All right.
The gripping hand?
Renner's been watching too many holoflicks."

"Yes, sir. Excellency, I should be seeing to things."

"Yes, the bodies. We'll want to know all about those. The gripping hand?" Bury eased out of the water bed. His head spun with the motion, and all his joints creaked in protest. "I'll be right down. Have coffee for me, real coffee. Allah help you both if you woke me for nothing but a mugging."

Renner's fine new Spartan tunic was covered with blood, still wet. He had trouble focusing his eyes. He was already talking as Bury took Turkish coffee from Cynthia and sat down.

"They were waiting outside," he said. "I sent the taxi off and started for the door. Two stepped out of God knows where. One grabbed my arms from behind. One sprayed Peaceable Sam in my face. I think that's what it was; I didn't try to sniff it. Held my breath. Bit the alarm tooth and ejected my sleeve gun and sprayed him back. He fell against me. Sounded like popcorn going off all through his body. That's where all the blood came from. The guy behind me, I sprayed his feet."

Nabil was at a console, monitoring as one of Bury's agents began an autopsy on the first of the dead muggers. He looked up to say, "Mr. Renner had called in that he was coming, so the staff was waiting for him, of course. When we heard the alarm they were ready."

Bury sipped at sweet Turkish coffee in a tiny cup. Renner gulped at what Nabil had given him: evil black espresso, service for four in a full-sized mug with a lemon slice floating it in. It popped his eyes open and stood his hair on end.

Bury winced, too, just watching. He said, "The gripping hand?"

"The
gripping
hand.
One
hand, other hand,
gripping
hand. I've been hearing it all night. I didn't haul you out of bed to tell you about a god damned mugging."

He could follow Bury's thoughts.
Drunk
.
Not making sense
. Then the sense came through and the blood drained from Bury's dark face. Renner said, "Hey!" and reached out to steady him.

Bury brushed the hand off. "Report."

Renner sat a little straighter. "I went out to look around, as usual. Dressed fancy. Well-paid pilot to a billionaire trader, carrying money and looking for fun. First—"

"You were doing Renner."

"It's the easy part of my job. Usually."

His lips felt numb and rubbery. Somehow he made them work. "On Maxroy's Purchase a brothel is called an 'interaction nook.' I'd heard about Ressina's. I went there. I didn't want their best girl; I wanted a native. I came away with a lady named Belinda. . . ."

The sun was setting somewhere behind the fog when they reached Shibano's Sea Cave. Maxroy people kept early hours.

Belinda was a pale blonde, tall, with a heart-shaped face. She had a thick Maxroy's Purchase accent. "Oh, it's lovely! I've never been here myself. You understand, you won't get a drink here?"

Liz Carlyle - 07 - The Geneva Trap by Stella Rimington
Life Shift by Michelle Slee
The Glory Boys by Douglas Reeman
The Quiet Gun - Edge Series 1 by Gilman, George G.
The Dog by Kerstin Ekman
With Every Breath (Sea Swept #2) by Chase, Valerie
What Was Mine: & Other Stories by Ann Beattie
Annie of the Undead by Varian Wolf
Master Chief by Alan Maki
Maggie Cassidy by Jack Kerouac