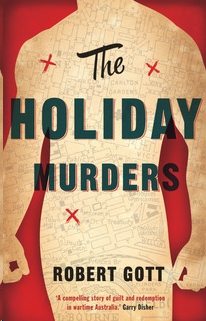 Robert Gott was born in the small Queensland town of Maryborough in 1957, and lives in Melbourne. He has published many books for children, and is the creator of the newspaper cartoon
The Adventures of Naked Man
. He is also the author of the William Power trilogy of crime-caper novels set in 1940s Australia:
Good Murder
,
A Thing of Blood
, and
Amongst the Dead
.

For my parents, Maurene and Kevin. Always, always.

Titus Lambert had
never been fond of Christmas. When John Dedman, the Minister for War Organisation of Industry, announced that Christmas 1943 was to be as good as cancelled, Titus couldn’t share his wife, Maude’s, disappointment. They had sharply differing reactions, therefore, to the sound of the telephone ringing at 6.00pm on Christmas Eve. Maude took the call, and knew immediately that her evening was about to be ruined.

Maude passed the telephone to Titus and watched his face register Joe Sable’s news. Titus’s dark eyebrows rose, fell, and came together in a frown, but she knew from having watched him closely over the years that he was also feeling something close to relief. And Maude knew why. However grim the reason for his being called away, he would not now be obliged to sit with her and listen to the first episode of a new serial on 3UZ. He hung up the telephone, ran his fingers through his thinning hair, and tried to sound regretful. ‘Looks like a murder/suicide in East Melbourne,’ he said. ‘Sorry, Maudie.’

She sighed, kissed him, and said without rancour, ‘No you’re not.’

There was very
little traffic on the streets as Titus drove from his house in Brunswick towards East Melbourne. The Transport Police had been more active than usual recently, which he thought might explain the phenomenon. The threat of fines for unnecessary travel was probably a more powerful motivation than the constant appeals to patriotism. Whatever the reason — and perhaps it was no more mysterious than that it was Christmas Eve — there were no traffic snarls as he drove into the city. The footpaths of Swanston Street were busy, but the shopkeepers had been assiduous in complying with the government’s insistence that there be no Christmas bunting or elaborate window displays. There were fewer American servicemen about than there had been the previous year — General Macarthur had moved his headquarters to Brisbane halfway through the year before — and Titus wondered what the few who were left made of this dour, drab, hot Yuletide.

The house at Number 1 Clarendon Street, East Melbourne, was quite a pile. Whoever lived there, Titus thought, was rich, and their wealth was old. This house had escaped the ignominy of being converted into flats — a fate that had befallen many of Marvellous Melbourne’s mansions. After fifteen years in the police force, Titus felt only a faint flutter of nerves as he walked up to the front door. He’d seen too many corpses, in varying states of decay and rupture, to feel serious trepidation. He knew the ghastly potential of cords, blades, axes, and hammers. He wasn’t, however, beyond being shocked, so he was always aware that his already-low opinion of his species had further to fall.

The door was opened by a constable whose age implied either a dismal failure to advance or a convenient return to duty to avoid Manpower ordering him into a factory. Inside, a wide corridor, with a floor of elaborate, inlaid stone, led to a broad staircase. Titus heard a sound of muffled weeping coming from behind the door of one of the rooms along the corridor’s length. The sound was briefly amplified as Detective Sergeant Joe Sable emerged from the room. He hurried towards Titus.

‘I’m sorry to do this to you on Christmas Eve, sir.’

‘Don’t apologise, Sergeant. Maude is used to sudden changes of plan. What have we got here?’

‘As if Christmas wasn’t bad enough all on its own.’

Joe Sable indicated the door closest to the front of the house.

‘I suppose you’d call this the drawing room,’ he said, and pushed the door open. The familiar ferrous odour of blood, and the thick, nauseating smell of excrement assaulted Titus’s nostrils, and he began instinctively to breathe through his mouth. The room was expensively furnished — that was obvious at a glance — but what would otherwise have been a lovely trapezium of sunlight falling through windows dressed with gorgeous curtains fell upon a corpse that caused Titus to utter an involuntary, ‘Good God.’ He disciplined the gorge that rose in his throat, closed his eyes for a moment, and switched something inside himself into a neutral gear. He looked at the body at his feet, and asked, ‘Who is he, and who is the weeping woman?’

‘His name is Xavier Quinn, and the woman is his sister. She has a friend with her.’

‘Is there anyone with them?’

Titus allowed his exasperation to show.

‘Get back in there, Sergeant, and watch and listen.’

‘Yes, sir,’ he said, blushing with embarrassment at this obvious lapse. ‘There’s another body upstairs — the woman’s father.’

‘Let’s do this one at a time, Sergeant.’

Joe left Titus to absorb the horror before him. The naked body was that of a man, probably in his early twenties. The face was swollen and bloodied beyond easy recognition. He was thin, with an unremarkable distribution of body hair. What was remarkable, though, was that he’d been nailed to the floor in the attitude of the crucified Christ. His legs had been broken, probably with the poker that lay nearby, and a wound had been made in his side. The body boys — the clutch of people who took possession of a corpse, examined it, photographed it, and broke it down into its component parts in search of evidence — hadn’t yet arrived. For a few minutes, Titus had the body to himself. This was a rare luxury. Christmas Eve slowed down normal processes.

‘Talk to me,’ he said softly. ‘Who hated you enough to do this to you?’

Titus didn’t need to be a pathologist to know that this young man’s injuries had been inflicted while he was still alive. Blood had flowed freely, and he must have suffered terribly. Titus looked away from the body, and his eyes swept the room. There was something feminine about it, apart from the prominent placement above the fireplace of a spectacularly tortured, Cranach-like Christ writhing on a large crucifix carved sensuously in pale wood. The body in the room was clearly a savage parody.

Apart from the poker, nothing in the room seemed to have been disturbed. If there’d been a struggle, any disruption to the opulent furnishings had been restored to order. Perhaps the victim’s broken legs explained the absence of any sense of struggle.

Titus walked into the corridor and summoned the constable by the front door. Together they entered the room from which the sound of weeping still issued. Joe Sable was standing awkwardly by a window, and there were two women sitting opposite one another in front of a fireplace. One had her head in her hands, and her shoulders shook; the other was leaning towards her, her hand placed reassuringly on a heaving shoulder. Titus indicated to Joe that the constable was to replace him. As Titus and Joe left the room, the front door opened, and a man entered, carrying two cameras and a bag.

‘In there, Martin,’ Titus said, indicating the drawing room, where the body lay. Martin Serong nodded. He expressed no annoyance at having been called away from home on Christmas Eve, and Titus would have been astonished if he’d done so. As a police photographer, Serong’s work exposed him to the very worst of human proclivities; nevertheless, he was, Titus believed, among the most gracious of men. He was also meticulous, and knew better than anyone how to make sense of a crime scene. Sometimes his photographs revealed more to Titus than he had seen with his own eyes.

Joe led Titus up a wide staircase and along a corridor lined with what looked like family photographs. He stopped at a door that was partly open.

‘This is the bathroom,’ Joe said. ‘The man in the tub is the father. His name is John Quinn.’

‘That name’s vaguely familiar. Why?’

‘No idea, sir. It doesn’t ring any bells with me.’

Titus was about to say that this might simply be a consequence of Joe’s age and inexperience, but thought better of it.

The bathroom was tiled in green — which, in Titus’s view, was always a mistake — and the reflected light gave a bilious cast to the very dead face of the man who lay in the generously proportioned bath. He looked to be in his sixties, and was fully clothed; his features were remarkably composed, given that the back of his head and his brains were spread across the chip heater and the wall behind it. Titus moved to the edge of the bath.

‘There are no signs of a struggle, so I presume he got into the bath under his own steam. There’s a service revolver near his right hand, and in his other hand there’s a knife with blood on it. There’s also a clump of brown hair sticking to the fingers holding the knife.’

‘Put it all together, and what do you get?’

‘I’d say that the blood on the knife will turn out to be Xavier Quinn’s, and that the blade will fit neatly into the wound in his side. This man has grey hair, so that hair in his fingers probably belongs to his son. I’d say this is a murder/suicide, and our job will be to find out why.’

Titus Lambert turned and looked again at the body of John Quinn.

‘Force yourself to look at the face, Sergeant. Every inch of it.’

Joe Sable leant down and examined John Quinn’s expression-less features. He was clean-shaven, and neatly so, with no nicks or razor burns. His mouth was open, and his bottom false teeth had shifted slightly. The top plate had been shattered.

‘Look at his nostrils and at the area around his top lip.’

‘It’s red. Perhaps he had a cold and had been blowing his nose a lot.’

‘What about his clothes?’

‘They’re expensive. He’s wearing a waistcoat, and the trousers have cuffs. He obviously wasn’t too interested in austerity guidelines.’ He paused. ‘And there’s no blood on them. If he’d just come from slaughtering his son, he’d be covered in blood. He could have washed and changed, of course.’

‘You think he dressed up to blow his brains out?’

‘The red around his nose looks like a chloroform burn to me. The knife, the hair on his fingers — why would they be there if he’d cleaned himself up? It’s too neat, too obvious, too convenient. His eyes are closed, so I think he was unconscious when someone put the gun in his mouth and pulled the trigger. These are two murders, Joe, and whoever did them is half as smart and twice as strong as most people. That particular combination makes me nervous. We need to talk to the daughter — she may be in great danger.’

Secretly Craving You by North, Nicole
Number9Dream by David Mitchell
Given by Susan Musgrave
The Last Day by Glenn Kleier
This Is How It Ends by Jen Nadol
Carpe Corpus by Rachel Caine
Better Than Perfect by Melissa Kantor
Eternal War Rising to the South: The Beynok Vampire Series by Bradshaw, Erika
The Shadow Men by Christopher Golden; Tim Lebbon
The Last Sin Eater by Francine Rivers