Read The Hour of Peril: The Secret Plot to Murder Lincoln Before the Civil War Online

The Hour of Peril: The Secret Plot to Murder Lincoln Before the Civil War 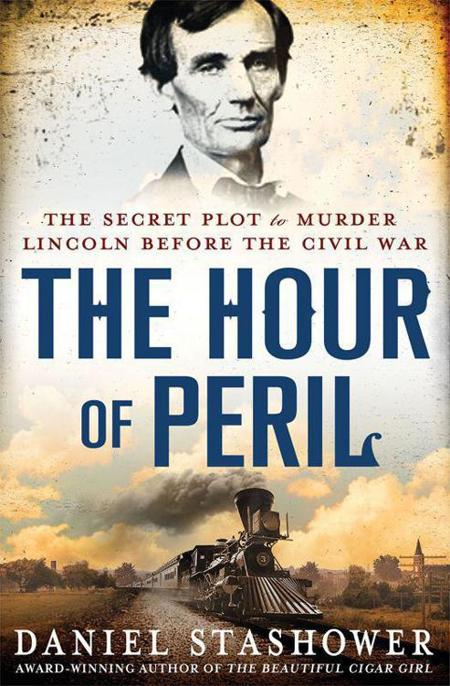 For Sam and Jack,

PART ONE:
THE COOPER AND THE RAIL-SPLITTER

Prologue: His Hour Had Not Yet Come

2.
How I Became a Detective

19.
An Assault of Some Kind

PART THREE:
THE MARTYR AND THE SCAPEGOAT

21.
The Flight of Abraham

“The Flight of Abraham”

In the hour of the nation’s peril, he conducted Abraham Lincoln safely through the ranks of treason to the scene of his first inauguration as President.

—Inscription on the grave of Allan Pinkerton

It is perfectly manifest that there was no conspiracy—no conspiracy of a hundred, of fifty, of twenty, of three; no definite purpose in the heart of even one man to murder Mr. Lincoln in Baltimore.

In the following pages, I have standardized some of the eccentric spellings and capitalizations found in the source materials, and replaced the initials and code names used in Allan Pinkerton’s records with the real names, when known, of the operatives concerned. Also, in that more genteel time, Pinkerton’s operatives refrained from using profanity, employing discreet elliptical devices to obscure offending phrases. Recognizing that at least some contemporary readers will be familiar with these phrases and may find the device distracting, I have restored the original intent.

“THIS TRIP OF OURS
has been very laborious and exciting,” the young poet wrote to a friend back home in Illinois. “I have had no time to think calmly since we left Springfield. There is one reason why I write tonight. Tomorrow we enter slave territory. Saturday evening, according to our arrangements, we will be in Washington. There may be trouble in Baltimore. If so, we will not go to Washington, unless in long, narrow boxes. The telegram will inform you of the result, long before this letter reaches you.” 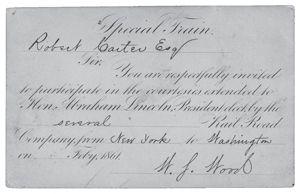 Twenty-two-year-old John Milton Hay had ample cause for worry as he set down these words in February 1861. He had signed on as a personal secretary to Abraham Lincoln just a few days earlier, on the eve of Lincoln’s inauguration as president of the United States. For several weeks, Lincoln had faced a mounting threat of assassination on his journey to the capital, culminating in a “clear and well-considered” murder plot to be carried out at a whistle-stop appearance in Baltimore. Over a period of thirteen days, as the president-elect traveled by train from Springfield to Washington, a makeshift, self-appointed security detail raced to uncover hard evidence of the looming peril, in the hope of persuading Lincoln to adopt “necessary and urgent measures” before placing himself in harm’s way.

Leading the effort was the detective Allan Pinkerton, whose fame as a fierce and incorruptible lawman was sweeping through America’s cities and out to the expanding edges of the frontier. Pinkerton and his agents were becoming legendary for their relentless, single-minded pursuit of lawbreakers, whose photographs were cataloged in a famous “rogue’s gallery” at their Chicago headquarters. The dramatic Pinkerton logo—with the motto We Never Sleep coiled beneath the image of a stern, unblinking eye—became a potent emblem of vigilance, bringing the term
private eye
into the American lexicon.

In Baltimore, however, Pinkerton would be tested as never before. The detective had built his success on a slow, methodical style of investigation—“Our operations are necessarily tedious,” he once declared—but the rapidly evolving situation in Baltimore required speed, improvisation, and no small measure of luck. Pinkerton, who had gone to the city to investigate a vague threat against railroad property and equipment, had not expected to uncover an assassination conspiracy. “From my reports you will see how accidentally I discovered the plot,” he later admitted. “I was looking for nothing of the kind, and had certainly not the slightest idea of it.” Once on the scent, however, he pursued it with feverish energy, and he soon became convinced that dramatic measures would be needed to spare the president-elect’s life. By this time, however, the train had already left the station, in every sense of the phrase, as Lincoln made his slow, inexorable progress toward the capital, determined to make a public display of openness and goodwill in the days leading up to his inaugural. Pinkerton now found himself contending not only with the conspirators but also with the intractability of Lincoln and his advisers, who were reluctant to alter their careful plans—and invite public scorn—on the basis of vapory rumors. “All imagination,” Lincoln declared at one stage. “What does anyone want to harm me for?”

The stakes were enormous. “Had Mr. Lincoln fallen at that time,” wrote Pinkerton, “it is frightful to think what the consequences might have been.” Lincoln’s election three months earlier had thrown the country into crisis. By the time he set off for Washington, seven states had seceded from the Union. Lincoln hoped to “soothe the public mind” on his two-thousand-mile inaugural train journey, giving over a hundred speeches, in which he would offer calming words to the North and extend a hand of reconciliation to the South. Over half a million people flocked to see him at railroad depots and trackside watering stops, all of them anxious for a sign that the country would be safe in his hands. “The gradual disruption of the Union that dark winter lay like an agony of personal bereavement,” wrote one well-wisher. “I longed to read in the face of our leader the indications of wisdom and strength that would compel the people to anchor in him and feel safe.”

As the train rolled east, however, the warnings of danger grew more insistent. Newspapers throughout the South reported that a large cash bounty was on offer to “whomsoever” managed to assassinate Lincoln before he took office. There was also a real possibility that the state of Maryland, where Lincoln’s train would cross below the Mason-Dixon line for the first time, would secede from the Union before he reached the border. If so, Washington would be entirely cut off from the North. As Maryland went, many believed, so went the nation.

In Baltimore, Pinkerton and his detectives were doggedly piecing together details of a “murderous compact” to be carried out at one of the city’s train stations. “It had been fully determined that the assassination should take place at the Calvert Street depot,” Pinkerton wrote. “When the train entered the depot, and Mr. Lincoln attempted to pass through the narrow passage leading to the streets, a party already delegated were to engage in a conflict on the outside, and then the policemen were to rush away to quell the disturbance. At this moment—the police being entirely withdrawn—Mr. Lincoln would find himself surrounded by a dense, excited and hostile crowd, all hustling and jamming against him, and then the fatal blow was to be struck.” As the detective would explain to William Herndon, Lincoln’s law partner turned biographer, the plot had been audaciously simple and efficient. “Excuse me for endeavoring to impress the plan upon you,” he wrote. “It was a capital one, and much better conceived than the one which finally succeeded four years after in destroying Mr. Lincoln’s life.”

Others believed that an attack would be launched while Lincoln was still aboard his train, and that police and city officials were colluding in the plot. “Statesmen laid the plan, bankers endorsed it, and adventurers were to carry it into effect,” ran an account in the
New York Times.
“[T]he idea was, if possible, to throw the cars from the road at some point where they would rush down a steep embankment and destroy in a moment the lives of all on board. In case of the failure of this project, their plan was to surround the carriage on the way from depot to depot in Baltimore, and assassinate him with dagger or pistol shot.”

With time running out, Pinkerton hatched a desperate, perhaps foolhardy plan: He would abandon the relative security of Lincoln’s small cadre of escorts in favor of a surprise maneuver, catching the plotters unawares. The risks were enormous, as the detective readily admitted. If exposed by a careless word or intercepted message, the president-elect would be left almost entirely unprotected. In Pinkerton’s view, however, this perilous feint offered the only chance that Lincoln would survive to become president. As the president-elect’s train neared the “seat of danger,” the only remaining difficulty was to convince Lincoln himself.

IN APPROACHING THE STORY
of the Baltimore plot, a writer must make certain choices and assumptions. Most readers, it would seem, will know that Abraham Lincoln survived the crisis to become president of the United States, and that soon afterward the nation was plunged into the Civil War. The events of February 1861 continue to capture our attention, however, not only for the drama of the plot and its detection but also because Lincoln’s handling of the crisis and its fallout would mark a fateful early test of his presidency, with many dark consequences. In charting the sweep of events that carried the nation into war, it is customary to focus on landmarks of policy and social change, such as the Missouri Compromise, the Kansas-Nebraska Act, and the Dred Scott decision. Set against these milestones, the drama in Baltimore is often overlooked, pushed aside by the more pressing urgencies that were to come, and obscured by its own uncertainties and contradictions. Seen in the light of what was to come, however, the Baltimore episode stands as a defining moment, marking a crucial transition from civilized debate to open hostilities, and presenting Lincoln with a grim preview of the challenges he would face as president. In many ways, it was the wrong story at the wrong time; Lincoln himself would be quick to diminish the importance of what had occurred, and its lessons were not learned.

Morgan's Mercenaries: Heart Of The Warrior by Lindsay McKenna
Sex and Violence in Hollywood by Ray Garton
Christmas Congratulations by Cat Summerfield
I Quit Sugar for Life by Sarah Wilson
Tidal Rip by Joe Buff
REGENCY: Loved by the Duke (Historical Billionaire Military Romance) (19th Century Victorian Short Stories) by Tencia Winters, Serena Vale
The Secret Zoo by Bryan Chick
Whill of Agora: Book 02 - A Quest of Kings by Michael Ploof
Ann Brashares - The Last Summer (of You and Me) by Ann Brashares
Shadowlander by Meyers, Theresa