Read The Icarus Prediction: Betting it all has its price Online

The Icarus Prediction: Betting it all has its price 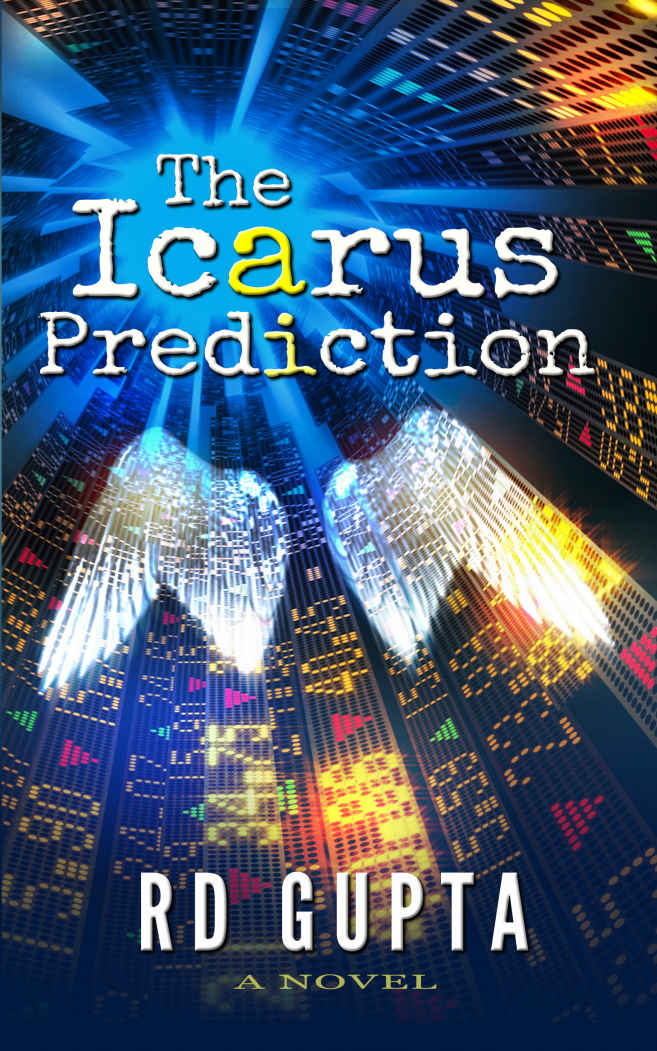 This Novel is a work of fiction. While some of the place names and family names are real, the characters and incidents are either the product of the authors’ imaginations or are used fictitiously, and resemblance to actual persons, living or dead, businesses, companies, events or locales is entirely coincidental.

Copyright © 2015 RD Gupta. All rights reserved, including the right to reproduce this book, or portions thereof, in any form. No part of this text may be reproduced, transmitted, downloaded, decompiled, reverse engineered, or stored in or introduced into any information storage and retrieval system, in any form or by any means, whether electronic or mechanical without the express written permission of the author. The scanning, uploading, and distribution of this book via the Internet or via any other means without the permission of the publisher is illegal and punishable by law. Please purchase only authorized electronic editions, and do not participate in or encourage electronic piracy of copyrighted materials.

so I could finish

A dull thud punched through the morning air, causing Jarrod Stryker to turn and scan the distant rooftops of the Beirut skyline. An acrid mushroom cloud rose in the distance as two F-16s emblazoned with the Star of David screamed overhead en route back to their homeland.

“Quite the wake-up call,” muttered Jarrod. “Maybe we should order something from room service.”

His lame attempt at humor elicited no response from his companion, who kept her eye glued to the scope mounted on the Styr sniper rifle pointed down the street.

They were lying side by side on two sniper pads on the rooftop of an abandoned warehouse on the southern outskirts of Beirut. It was a down-market area filled with tenements, warehouses, some light industrial buildings, and a population without a shred of hope.

Beirut, once the jewel of the Middle East, had been largely destroyed in the long civil war from 1975 to 1990. But in the following years, it had been on a trajectory toward its former stature when the extremists of Hezbollah decided to take some missile potshots at Israeli settlements across the border. The Lebanese government—an oxymoron if there ever was one—had turned a blind eye to Hezbollah’s takeover of Southern Lebanon and the missile attacks. In 2006, Israel decided to hold the Lebanese accountable for the attacks and was methodically dismantling the country’s infrastructure to prod the government into action.

Hezbollah, however, had other ideas. It had turned into something of a tough nut. The vaunted Israeli tank forces had invaded Southern Lebanon like a flabby, middle-aged prizefighter stepping in the ring with a younger, meaner adversary. Using modern antitank weaponry, the Hezbollah legion stopped the Israeli advance cold.

The Israeli Air Force, however, was a different matter. They had been buzzing and blasting Beirut for weeks with impunity. They were running out of targets and were randomly targeting buildings with even the faintest hint of impropriety.

“You know,” observed Jarrod. “Maybe you should have gone to law school here.”

Sarah Kashvilli’s green eyes darted at him for a moment. “What?”

“Where was it you were accepted? Duke?”

“That and Stanford. But my career plans changed.”

“Clearly. But one of the oldest law schools of the Roman Empire was founded right here under the Severan dynasty, one of only three recognized by the Roman Empire. Not many people know that.”

She sighed and rolled her eyes. “Thank you for the factoid. Too bad Harvard Business School didn’t have a Beirut campus.”

“Would have been warmer than Cambridge, I must say.”

She sighed again. “Jesus. Can we just stay focused on the matter at hand?”

Despite the bombing around them, the Hezbollah-Israeli conflict had nothing to do with the matter at hand.

After 9/11, the enormity of the American intelligence failure was manifest, and it came to light that the CIA did not have a single asset in place within the al-Qaeda organization. Five years, countless failures, and suitcases of money later, only one emerged. Tariq was a keeper. Born in New York City to Syrian parents, Tariq al-Fada had grown up speaking Arabic with a Damascene accent before he learned English. On 9/11, he’d been on traffic duty with NYPD for two years when he was yanked by CIA recruiters desperate for Arabic-speaking assets.

Five years later, posing as a Syrian malcontent, he’d worked his way up the al-Qaeda organizational chart to where he was knocking on the door of the inner circle. He’d run al-Qaeda’s Beirut cell successfully, earning the confidence of bin Laden’s supreme council. And apparently something was in the works. Nobody knew what, and Tariq was slated for a high-level meeting in the warehouse that was currently in the crosshairs of Sarah’s riflescope.

The meeting was with a Big Fish indeed. Ramsa al-Shehhi was the elder brother of Marwanal-Shehhi, the 9/11 hijacker who’d piloted United Flight 175 into the South Tower of the World Trade Center. After the capture of Khalid Sheikh Mohammed and the expulsion of al-Qaeda from Afghanistan, Ramsa had been placed in charge of the next Big One by bin Laden himself. This was the agenda for Ramsa’s initial meeting with Tariq.

And to provide Tariq’s backup, the Agency had brought in their A-team: Jarrod Stryker and Sarah Kashvilli. They were Top Gun graduates at the Farm and two of the youngest recipients of the Blue Heart CIA medal for valor.

A curious thing about the Blue Heart medal: the recipients can’t take it home and put it on the mantle. Instead, they’re taken into a dimly lit room in Langley’s basement, where it is awarded in a solemn ceremony. Then it’s taken back and put in a vault, and recipients never see it again until their retirement ceremony.

“Tariq is getting nervous, I hear,” observed Jarrod.

“Nervous? Why should he be nervous?”

“Oh, I don’t know. Living a false identity for years in a den of vipers and never knowing the balance of his 401(k). It would make anyone nervous. And he told his case officer that he felt he was under suspicion.”

“So is this meeting a strategy get-together, or an execution?”

Jarrod shrugged. “The case officer said he was somewhat confident it was the former, because he’s heard from other sources our Tariq is a rising star within al-Qaeda. However, he also said he would rather play Twister with a porcupine than trade places with Tariq.”

“Umm,” was the only response.

“OK, let’s go over the drill one more time.”

“I know the drill,” replied Sarah.

“I know you know the drill, but for the sake of my comfort level, give it to me again.”

Robotically, she replied, “Ramsa will arrive first—when, we don’t know. Tariq arrives at nine-thirty wearing a blue baseball cap. He goes to the meeting. If he leaves wearing the cap, everything is copasetic. If he’s not wearing the cap, it means trouble. Ramsa doesn’t leave alive, and you hit the button on the detonator.” She nodded at the black box lying between them with the antenna sticking out. “Assuming you did your job and wired the building correctly.”

“Aren’t we testy today?” Jarrod replied. “We don’t have any Predators here so I had to do it the old-fashioned way. There’s enough Semtex in that basement to send Ramsa back to Kabul. Or someplace less inviting. You just cover Tariq’s back if he needs it.”

Seventy-two hours ago, he’d been enthralled to once again be in Sarah Kashvilli’s presence, and initially she seemed similarly attuned. But ever since they received their briefing in the safe room of the American Embassy in Beirut, her demeanor had changed. She’d become remote, cryptic in her responses, and prickly. The harder he pushed, the more resistant she became. So he figured there was no reason to hold back.

“You know, Sarah, I always dreamed about us spending another night together. But this wasn’t exactly what I had in mind.”

Was there a hint of a smile? It disappeared. “Heads up,” she said.

Jarrod peered through the binoculars on the small tripod and saw two open SUVs coming down the street, both of them bristling with rocket-propelled grenade launchers. They cruised by the meeting place, then circled the block twice. It was Ramsa’s horde of bodyguards.

On the last pass, four of them got out and entered the building, and Jarrod thought about the Semtex he had hidden behind the ceiling tiles of the basement and whether he had left any traces behind. He took a deep breath and tried to relax.

Four minutes later, one of the henchmen came outside and muttered something into a handheld radio.

As if on cue, three more SUVs with RPG accessories came around the corner. In most urban settings, a convoy of RPG-toting thugs would raise some eyebrows. But this was Beirut. The convoy pulled up, and a half-dozen bodyguards formed a picket up and down the street. Jarrod heard Sarah’s breath catch as Ramsa stepped out of the SUV and surveyed the landscape. He appeared no different from other young Arab men dressed in jeans and a pullover. He turned in Jarrod’s direction and the cold stare caused Jarrod to stay absolutely still. Then Ramsa turned away and entered the warehouse.

They remained motionless as the sun slowly rose in morning sky. More Israeli jets buzzed around, causing the bodyguards to crouch and point their RPGs ineffectually at the heavens.

But then another Arab young man came around the corner. This one was a bit pudgy, wearing jeans, a polo shirt, and a baseball cap. As he approached the warehouse, the first bodyguard in the picket stopped him and patted him down. Then he was escorted into the lair.

Time passed. Then more time passed. Finally, Jarrod whispered, “You can hit them at this range if you need to, right?”

“You already know I can hit them at any range you’d care to mention,” replied Sarah.

“I guess that’s why you were tapped for this gig. I hear you were the best shooter of any class at the Farm. Did you seduce the range master or something?”

“I didn’t need to seduce anyone.”

So they settled into a tense silence as the minutes stretched into an hour and beyond. He decided this really wasn’t the right time to revisit that many-splendored night so long ago at the Farm. The truth be told, she had gotten to him—past those defenses— into that vulnerable realm where no one else had penetrated. But then she’d pulled duty in the Philippines, and he’d been shipped out to Kabul and then Somalia. She had become a distant but indelible memory. Until three days ago.

“There he is,” she whispered.

Ninety-seven minutes after he went in, Tariq emerged wearing his baseball cap and started up the road. They watched carefully as he walked past the last picket and turned around the corner.

“OK,” said Jarrod in a soft voice, his eyes glued to the binoculars. “Looks like our guy is bringing home the bacon. We’ll just lay low until—”

A stupefying
BAAHWHUMP!
interrupted Jarrod. The warehouse convulsed in a giant fulmination, sending a concussion wave across the roof like a tornado, blowing dust and grit violently into his face.

For a moment, Jarrod thought it might have been an errant Israeli bomb. But then he looked down and saw Sarah’s finger on the button of the black box with the antenna.

“
What the hell are you doing?
” he screamed. “Tariq was out clean!”

He would always remember those green eyes as she coldly stared him down and said, “My sister was in the South Tower.”