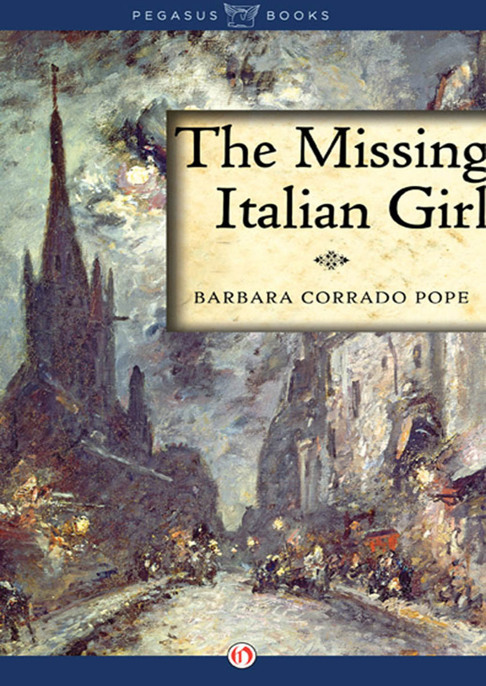 For my mother Edith, my sister Catherine Jean,

and my daughter Stephanie

T
HE RAILROAD TRACKS OF THE
Gare de l’Est stretched and curved beneath the bridge in gray, eerie silence. It was after midnight, the time of poor carters and night porters hauling their loads of garbage and human waste to the Basin de La Villette, hoping to make the last boat to the dumping grounds on the outskirts of Paris. Maura Laurenzano and the young Russian, Pyotr Ivanovich, were transporting a much deadlier cargo. The two of them stopped and watched as Maura’s sister, Angela, ran ahead, flitting from shadow to shadow like a frightened, wounded bird. When she signaled that no one was coming, they grasped the poles of their cart and continued across the bridge.

At seventeen, Maura was a year younger than Angela, but bigger and stronger. In the steamy June night, her sweat trickled down into the sleeves of one of Pyotr’s rough muslin shirts, prickling her arms. His vest veiled her femininity. She liked wearing his clothes, feeling him on her skin, smelling him. And besides, it was necessary. To complete her disguise, she had tucked her unruly black curls under one of Pyotr’s caps. Any passerby might pause and gawk at a girl hauling a cart. But not at two slender youths making their way in the night.

Angela waited in the dark, far from the flickering yellow light cast by a gas lamp. When Maura and Pyotr reached the end of the bridge, he motioned with his head to turn right into a narrow cobbled street. Under the moonless sky, they barely made out the warehouses and sullen dark shacks that lined their path. Maura’s arms burned with the strain of lifting and pulling the cart to keep the wheels from rumbling over the stones. Her heavy breathing filled her with the stink of Paris. Pyotr, too, panted silently as he led them zigzagging through the narrowest and most deserted streets. Finally, under the gaslights, they saw the wide, shimmering expanse of the Basin. Maura gasped when they got to the edge of a building that bordered the wharf. The first thing that caught her eye was the fiery glow of cigarettes as workers in caps and smocks stood around their wagons talking and laughing after their night’s labors. Pyotr had told her that La Villette would be empty after the last sewage boat left. There were even a few bourgeois in bowlers lingering along the quays and a hatless man with a fishing pole at the edge of the water. The covered mounds in the barges bringing supplies into the city teemed with hidden threats.

“Pyotr, are you sure this is right? There are people here. Shouldn’t we take him down to the canals?”

He held up his hand to calm her. He was like a prince. A young, anarchist prince, who had given up his nobility to live among the poor and learn about revolution from the French. Maura did not understand this golden-haired boy. She only knew that he was the only man she would ever trust.

“They’ll think we are dumping garbage illegally,” he whispered. “They are workers like us. They won’t tell the police.”

Sometimes Pyotr was so trusting she thought him stupid. But he wasn’t concerned about what she thought. He went over to her sister and smoothed a lock of hair, fairer even than his own, under her flowered scarf. “Don’t worry, my Angelina. He can’t hurt you anymore. No one will hurt you,” he said in the slow, careful cadence that marked him as a foreigner.

Maura did not have to see her sister’s face to imagine the bruises. It made her heart surge with hate again. Hate against the boss who had seduced Angela with a promise of marriage and then kept her in his room as if she were his slave. Maura’s chest began to heave. Not from effort this time, but from everything else: her hate, her shame that at this moment she felt jealousy, and, most of all, her fear. Her cheeks puffed out as she pressed her lips together to hold back the tears. What had they done? They were in so much trouble.

Suddenly she felt Pyotr’s hands on her shoulders. “It will be all right,” he said, looking into her eyes. “We aren’t going to the canals because we don’t want the body to move when they open the locks. We don’t want anyone to find it.” She wished her eyes were blue like his and Angela’s. She wished he would stay there forever, touching her, caring for her. She nodded as he took two bundles of clothes from the cart and left them with Angela in the dark. Then he signaled to lift the cart’s poles once more as they rolled it to a deserted section of the Basin.

Marcel Barbereau, who had been so hot-blooded, silver-tongued and tempestuous in life, had become stiff, heavy and mercifully silent in death. Even so, the monster moved as they took hold of him. A rigid arm jerked upward under the sheet they had torn from his filthy bed. Maura thought she would faint. Pyotr froze, then composed himself. He even smiled. For Maura, again. “A revolutionary must get used to death,” he said, although his rasping voice and trembling hands belied his bravado.

“Yes.” That’s all she, the girl he called bold and brave, managed to utter. As if of one mind, they swathed the corpse more tightly, then, shaking a bit and cringing, Maura helped Pyotr lift Marcel Barbereau out of the cart. Counting one-two-three under their breath, they swung the body into the water. She closed her eyes until she heard the splash. It was only right that the dense, hard muscles the bastard had used on her sister would sink him into the deep. Yet the sinking seemed to take forever. And when they finally sensed his disappearance, under a rippling disturbance of the calm waters, a chill coursed through her body. Damp with the sweat of June heat and terror’s cold, Maura tasted the nausea erupting in her belly. But she had to suppress the bile. She had to be brave, act the part, be a boy. Or a man, like Pyotr.

Maura stood by the cart as Pyotr went back to get Angela. Suddenly a tall, thin man emerged, with quick, definite strides, from the very street that they had taken to the Basin. Maura crouched down behind the cart and watched, peeking between the spokes of a wheel. She saw her sister recoil as the intruder noticed her and tipped his hat. Maura held her breath as Pyotr approached them. When she saw Pyotr thrust out his hand in greeting, she allowed herself to breathe again.
A friend. Maybe he is a friend,
she whispered to herself. Still she clutched the wheel, praying that he’d go away. At last, he gave a wave and started to stroll in the direction of the canals. Shaken, but relieved, Maura slid into a hard seat on the cobblestones. She did not move until Pyotr beckoned her.

“Who was that? What were you talking about?” she asked as she struggled to her feet.

“Someone who comes to our café. I had to talk to him. He wanted to meet Angela, because he thought she was my girl,” Pyotr said, as he laid a calming hand on her shoulder. “He even asked about the dark-haired girl who comes to listen to me make my little speeches. I told him I didn’t know where you are. And I don’t,” he said smiling, “since you have become a strong, brave boy.”

Maura thrust his arm away. She was not in the mood for one of Pyotr’s gentle jokes. “How can you be sure he is not a police spy? Didn’t you tell me they haunted all the workers’ cafes? Maybe he saw us, maybe he—”

This time Pyotr took her hand as he peered into her eyes. “I have seen his wounds. He was injured at the gasworks. He is a worker who is learning about his oppression. Soon he may become one of us.”

Maura shook her head at the pride she heard in Pyotr’s voice. How could he think about anyone else’s problems when they had so many of their own?

He led her and Angela under a gas lamp where he pulled two folded pieces of paper from his pocket. He had drawn a map to guide them across the river to his comrades. He had talked to them about the Russian girls many times. They were anarchists like him, believing that the rich ruled and oppressed the poor, and working for the day when everyone would be equal and live in decent, sanitary conditions. He spoke about them with admiration, for they were women studying to be doctors, so that they could go back to Russia and minister to the peasants. Tomorrow and the next day and the next, Pyotr explained, they would hide Maura and heal Angela.

Allison (A Kane Novel) by Steve Gannon
Morning Child and Other Stories by Gardner Dozois
Canción de Navidad by Charles Dickens
Wake Up Dead by Roger Smith
Dark Shadows by Jana Petken
Edge of Survival by Toni Anderson
Summer's Road by Kelly Moran
Stacey And The Mystery At The Mall by Ann M. Martin
MERMADMEN (The Mermen Trilogy #2) by Mimi Jean Pamfiloff
Tramp for the Lord by Corrie Ten Boom