Read The Iceman: The Rise and Fall of a Crime Lord Online

The Iceman: The Rise and Fall of a Crime Lord 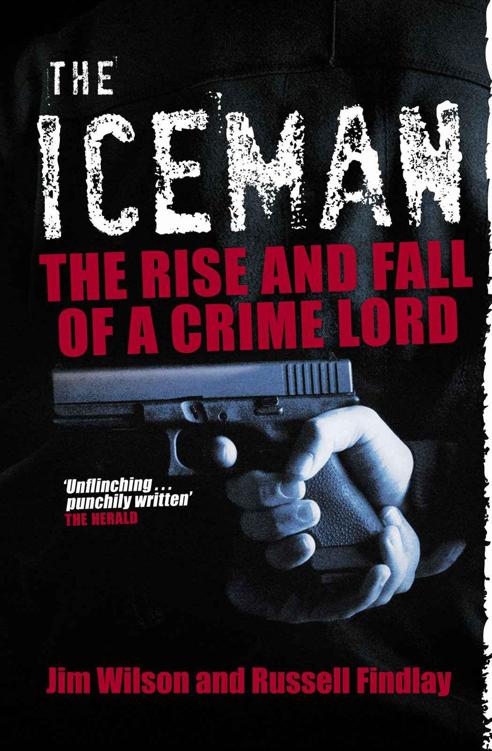 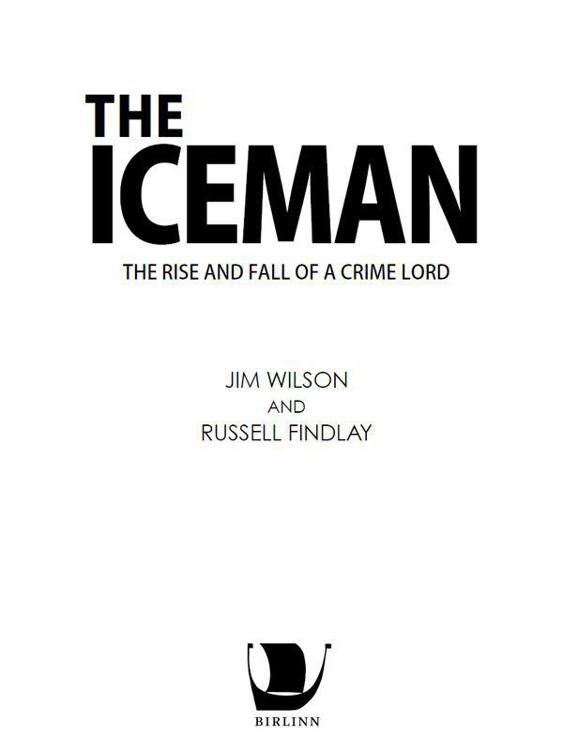 The moral right of Jim Wilson and Russell Findlay to be identified as the authors of this work has been asserted by them in accordance with the Copyright, Designs and Patents Act 1988

All rights reserved. No part of this publication may be reproduced, stored or transmitted in any form without the express written permission of the publisher.

4
Chips Off the Block

13
Name of the Father

25
Friends Across the Water

26
Chairman of the Board

34
Welcome to The Hague

Tony McGovern did not have time to turn off his headlights. The first shot shattered the driver’s window of his black Audi. The dull percussive thuds of three more shots followed instantly. The gunfire brought his friends from inside the New Morven pub where they had been waiting for him. As they emerged, a white car reversed at speed away from the pub, a man was seen sprinting in the opposite direction and McGovern was slumped, dying, in his car.

He had already visited the pub earlier in the day, drinking sparingly – a beer, possibly two. He was known to just about everyone in the Morven although only a handful of drinkers would say hello, catching his eye fleetingly, giving small nods and mumbled acknowledgements. He had spent some time in the backshop, the office behind the bar, but soon returned out front to the gaggle of drinkers who were splitting their Saturday afternoon between the pub and the bookies.

McGovern stood at the side of the bar with his arms resting on the counter. Side-on to the main door, partially hidden by the jangling fruit machines, he spoke quietly to a few men, who approached him in turn. His words were only just loud enough to be heard above the growing clamour. When the others spoke, McGovern’s gaze was directed down towards the floor but his eyes would flicker to and from the swing doors whenever they opened.

The date was 16 September 2000 and it was cold enough outside for McGovern to be wearing a jacket. It helped to conceal the heavy bulk of a £400 Kevlar stab-proof vest that he wore beneath. He had not left his home without strapping on the body armour for weeks – not since June when someone had tried to shoot him dead one Friday afternoon while he showered at his bungalow in nearby Bishopbriggs.

McGovern, thirty-five, had learned to be a careful man but if he felt safe anywhere it was there, at that rough public house between Springburn and Balornock, north of the M8 motorway that bisects Glasgow. Sited like a fort on a hill at the top of Edgefauld Road, the white-painted pub stands in isolation off the main road. Four stone steps lead up on to the small concrete concourse and surrounding car park while closed-circuit TV cameras, encased in steel mesh, perch high on each of the building’s corners. Tony had not voiced any particular fears that day and had no special plans for the night ahead. He left the bar after an hour or so, arranging to return to the Morven after 10 p.m. to meet some family, some friends, some associates.

His speeding £30,000 Audi A6 overtook another car on Syriam Street at 10.15 p.m. The driver remembered seeing the car as it headed towards the Morven half a mile away. McGovern phoned his wife Jackie on his mobile while driving. It was to be the last time she would speak to him. There were other men near the Morven making calls. Other arrangements were being made.

In Hornshill Street, cutting up from the busy Barmulloch Road towards the Morven, a white car was parked with a number of men inside it. As McGovern neared the pub, a white Vauxhall Astra was seen speeding down Boghead Road towards McGovern’s Audi as he drew up in front of the pub at 10.20 p.m.

The Morven was busy enough but it should have been busier. For every drinker from the surrounding streets buying pints and shorts at the bar, another was spending time and money elsewhere. The New Morven was a McGovern pub. It might not have the names of Tony and his three brothers on the deeds or the licence but their business and reputation might as well have been posted on the glass-fronted noticeboard outside that plugged the acts brave enough to accept a booking. The McGoverns’ business was selling class A drugs in the council estates and high-rises of north Glasgow. Their reputation was for savage, murderous violence.

McGovern was a regular visitor to the Morven, sometimes for pleasure, sometimes for business, more often a combination of the two. He had already collected his money from the men dealing drugs inside – heroin to the junkies, Ecstasy to the kids heading into town – and he’d checked his tick book, the scrawled record of outstanding debts, for drugs distributed or money lent. He parked his car in Littlehill Street, in front of the Morven, facing away from Edgefauld Road. If he’d faced the other way, he might have seen the car drawing in behind. He might have noticed the well-built man half-walking, half-jogging the twenty yards towards the black Audi. If he had seen his killer approaching, McGovern might have had a chance, an opportunity to flee or to fight. Instead, he was still seated in his car when the first bullet shattered the driver’s window before three more were pumped into his groin.

His headlights were still glaring in the darkening gloom when his friends ran from the pub. A white car was seen reversing, engine screaming, out of Littlehill Street on to Edgefauld Road and away. A man was seen sprinting through the pub’s small car park towards the council houses of Burnbrae Street before he disappeared into a garden, into the darkness.

The 999 call was made at 10.22 p.m. and, within minutes, an ambulance, blue lights flashing, drew up at the Morven. Emergency treatment was administered before McGovern was slid on to a stretcher and into the ambulance. The crew sped along Petershill Road, turning left on to the carriageway of Springburn Road to Glasgow’s Royal Infirmary less than a mile and a half away. It was there that Tony McGovern was pronounced dead at 11.23 p.m.

At the scene of the shooting, uniformed officers were taping off the streets around the pub. Their colleagues took details from drinkers, from the residents of homes nearby and from taxi drivers ranked on the main road just yards away – details but no information. No one had seen or heard a thing.

In a few days’ time, Detective Superintendent Jeanette Joyce, leading the murder inquiry, told reporters, ‘At this time, we have no motive. There is no obvious reason why Mr McGovern was murdered.’

Few of her officers would agree as even those with only a passing knowledge of the bloody feud that was being played out in the northside of Scotland’s biggest city already knew there was only one suspect for this most clinical of gangland hits. He was not always an enemy of McGovern. The two had once been best friends, best men at each other’s weddings, partners in crime, allies in the venal drugs trade laying waste to lives and neighbourhoods in their home city.

His name was Jamie Stevenson and he was to become better known as The Iceman.

It was still dark when officers started arriving at the squat police station in East Kilbride town centre and, by the time the briefing began, 150 officers had assembled. Only fifteen of them knew why.

The small group of officers from the Scottish Crime and Drug Enforcement Agency (SCDEA) understood that morning’s work would signal the beginning of the end of an operation stretching back almost four years. The secret offensive against Scotland’s biggest drugs trafficker had taken officers around the world and back again. It had involved months of uncomfortable, nerve-jangling surveillance – months of covert observation and secret recording of some of Scotland’s most dangerous and ruthless men. It had already led to the seizure of twelve tonnes of drugs worth £61 million, nine convictions for drug trafficking and money laundering and disruption to the criminal operation streaming heroin, cocaine, speed and cannabis into the country’s cities, towns and villages. As the sun came up on 20 September 2006, the police operation, code-named Folklore, was about to enter a final, decisive phase.

Knot Gneiss by Piers Anthony
Return To Snowy Creek by Julie Pollitt
The Unicorn by Iris Murdoch
Return to Willow Lake by Susan Wiggs
News For Dogs by Lois Duncan
Master of the Cauldron by David Drake
Morningside Fall by Jay Posey
Send Me a Cowboy by Joann Baker
Dark Angels by Koen, Karleen
Concierto barroco by Alejo Carpentier