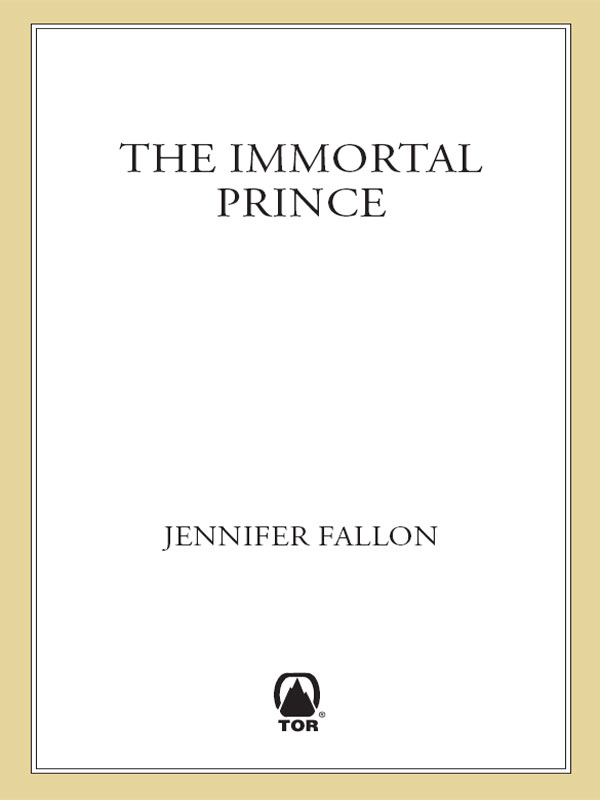 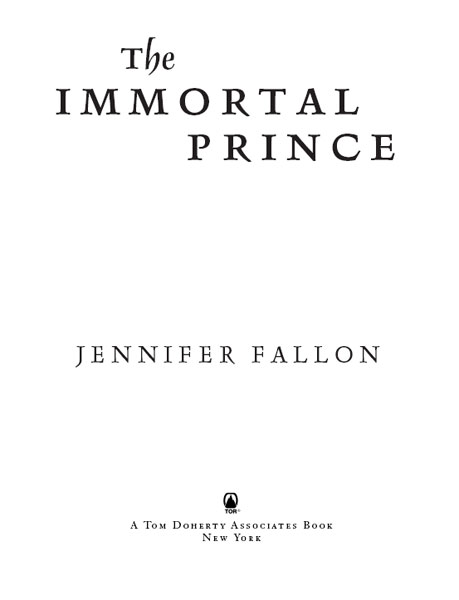 Copyright infringement is against the law. If you believe the copy of this e-book you are reading infringes on the author's copyright, please notify the publisher at:
us.macmillanusa.com/piracy
. 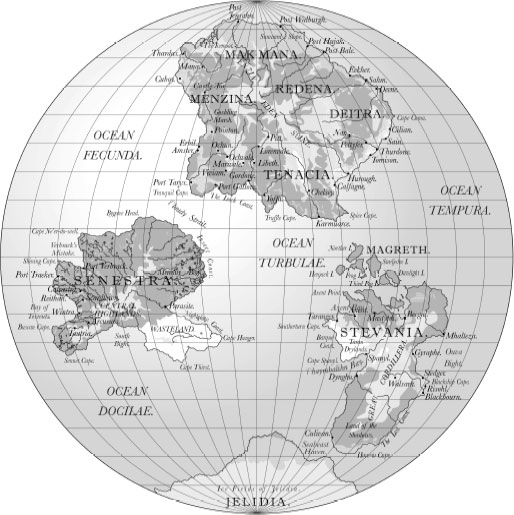 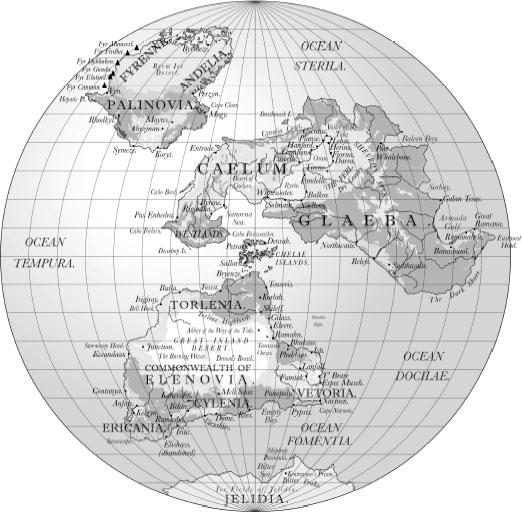 As the last of the stragglers stumbled into the cave, Krynan looked back over his shoulder at the end of the world, wondering vaguely why he felt nothing. He grabbed for the rocky ledge above, ignoring the pain of his burned hands, and pulled himself up, collapsing with relief as another bolt of lightning streaked the blood-red sky, thick with volcanic ash.

Propping himself on his elbows, Krynan felt, rather than heard, the ground rumble again. It had been shaking like this for days now, making it difficult to stand, let alone flee the carnage. Blinking back stinging tears, he shielded his eyes and turned to stare into the distance. There wasn't much left to see. The city of L'bekken was gone, and many of the outlying villages buried under layers of pumice and ash. Those structures that weren't swallowed by the advancing lava had been burned away earlier by the lightning thrown around with such abandon by the immortals who had brought this down upon them.

It was impossible to tell where his farm had once prospered by the river; impossible to pick one landmark from another. The river had boiled away, the land buried beneath the molten rock pouring from what had once been the fertile slopes of Mount Iriggin.

How many were dead was anybody's guess, what would happen to the survivors almost too frightening to contemplate.

He turned, barely recognising the woman who spoke to him. His wife's face was blackened with soot and speckled with blisters gained fleeing the burning ash. Her fair hair was a dirty brown colour and her once-fine clothes in tatters.

“What?” he asked, more harshly than he intended. It wasn't Alea's fault they were homeless, destitute and destined to die in this war between two gods who cared for nothing but their own desires.

“Your mother wants you.”

Krynan sighed, knowing what his mother wanted of him; certain he wasn't ready for the thankless and probably futile task the Cabal had so desperately bestowed upon her only son.

“Tell her I'll be there shortly,” he replied, turning to watch his world disintegrating before his very eyes.

Alea was silent for a moment and then nodded. “The Matriarch hasn't got long, Kry,” she warned and then turned and headed back into the cave.

None of us have got long,
Krynan thought, as another mountain farther to the east suddenly exploded, its peak boiling away in a ball of flame and ash, billowing into the sky like foaming ale spilling over the lip of a tankard. Still numbed by the magnitude of the destruction, he watched for a moment longer and then turned away.

His mother was lying on her side on a makeshift stretcher in the crowded cave. In the fitful light from the few torches they'd been able to salvage, he could see how badly she'd been burned. Her breathing was so laboured it was painful to listen to. Alea moved back when she saw him and allowed Krynan to kneel beside her.

“Where else would I be?”

With a blackened hand, his mother clutched at his tattered sleeve. “You have a job to doâ¦”

“My job is to look after the survivors.”

She shook her head painfully. “You are the Custodian of the Lore. Your jobâ¦your
only
jobâ¦is to protect the Lore. It's our only protectionâ¦against the Tide Lords.”

“Fat lot of good it's done us this time,” he retorted bitterly.

“All the more reason toâ¦protect it, Krynan.” His mother's face was etched with pain, but she seemed determined to ignore her own agony. For her, the Lore was everything; more important than any one person's fear or pain. “We might haveâ¦failed, but future generations canâ¦they can build on what we've learned. The Cabalâ¦is relying on you. Form another Pentangle. Protectâ¦the Lore. It mustâ¦survive.”

Her request, although he was expecting it, infuriated him. “You want me to walk away from my people? Let them suffer? Just to protect a few tattered pages of useless information?”

“Don't let your painâ¦cloud yourâ¦judgement, Krynan,” his mother advised. Her voice was failing. She was fading fast. “You've known all along it might come to this.”

That was the bitter truth. Ever since the Pentangleâthe governing body of the Cabal of the Tarotâhad appointed him Custodian of the Lore, Krynan had known it might come to this. But there was a vast difference between knowing you might be called upon one day to perform an onerous task, and the reality of being confronted by it.

He shrugged helplessly. “I fear the truth is that I never expected to survive.”

“That you haveâ¦is a sure signâ¦this is your destiny, my son.”

He shook his head. “I'm not strong enough for this, Mother.”

“The Cabal thought you were, otherwise you would not have been made Custodian.”

Krynan frowned, thinking he'd got the job because in the civilised parlours of L'bekken nobody really thought the Tide Lords would ever turn on each other so savagely. The humans weren't even sure what the fight was about, what altercation between the gods had escalated from a disagreement to the destruction of the whole world. Chances were they would never know, either, but like the countless civilisations before them who had suffered the same fate, it didn't really matter. All that mattered was saving the Lore, keeping it hidden out in the open, disguised as the Tarot. The Tide Lords were immortal but sooner or later, the Cabal believed, someone would find a way to destroy them. It was for that reason the Lore must be protected at all costs.

It just hadn't occurred to Krynan until now how high that cost might be.

His mother's breathing was thready, her voice almost gone. “Now promise me, Krynanâ¦promise you'llâ¦protect the Lore.”

“I promise,” he said, not brave enough to deny his mother's dying wish, despite how useless a task he thought it. “I'll see the wretched thing survives. Who knows, maybe in the future there
will
be humans smarter than us who can figure out a way to defeat the bastards.”

She nodded and moved her hand, reaching for something tucked into her blouse. Seeing the pain the movement caused her, Krynan reached for it himself. It was a pitifully thin packet he extracted, wrapped in an oiled cloth to protect it from moisture. It wasn't fireproof, however. For that, Krynan's mother had used her own body, shielding the precious documents from the burning ash with her life.

Krynan didn't think he was nearly so brave. Or dedicated.

“Protect the Lore at all costs,” he quoted, trying to keep the scepticism from his voice because nothing else would ease her mind. “The Tarot must survive so humanity can survive.”

“There
will
â¦come a time, Krynan,” she promised softly, her eyes closing. “Justâ¦not now. Not in our time.”

“There will come a time,” he agreed, surprised to taste salty, sooty tears streaking his face. As he was speaking, his mother's raspy breathing slowed and then stilled. He waited for a moment, hoping it would pick up again, but between one breath and the next that never came, his mother's body had relaxed, her features no longer contorted with pain.

Alea came up behind him and placed a comforting hand on his shoulder. “I don't have to leave,” he said without looking back at her. “I could stay. Now she's dead, nobody caresâ”

“The Tarot must survive so humanity can survive,” Alea cut in. “You must fulfil your oath, Krynan. For all of us, not just your mother.”

He stood up and turned to look at her. “Do you really believe that, Alea?”

“I
have
to believe it, Kry,” she told him, leaning forward to kiss his tear-streaked face.

She shook her head, smiling sadly. “We can't risk it. Go, my love, now, while the gods are still busy hurling mountains at each other. One man will slip through where a group might not. There'll be safer places to hide, other places where the devastation isn't as bad.” She smiled with ineffable sadness, gently wiping away his tears with her thumbs. “Just think of us, sometimes.”

“You're the Custodian of the Lore, Krynan. It's your duty.”

It seemed too heavy a burden, and probably a useless one. All they'd gone through to gather the information contained in the Tarot had proved futile. He reached down to the swell of her belly protruding from her tattered clothes. “I'll never see my sonâ¦”

“If you don't do this,” his wife pointed out sadly, “it won't matter if your son is born or not.”

He looked over his shoulder at the refugees crowded into the cave. There were scores of them, their faces blackened with soot and ash, their eyes blank pools of despair.

“You're their hope for the future, Kry,” Alea reminded softly. “Their hope that humanity
has
a future.”

The weight of responsibility felt enormous and he wasn't sure he had the strength to carry it, but the notion his unborn son might one day wear a look of such abject despair helped him find it. To be utterly without hopeâ¦to be so totally wretched. His son deserved better. He deserved to have a reason to hope, even if it ultimately proved a futile one.

Krynan pulled Alea to him and hugged her tightly, and then kissed her blackened lips, knowing if he didn't leave now, the despair might suck him down too and he wouldn't have the courage to go at all. He put his hand on her belly. “I love you, Alea. Make sure my son knows I loved him, too.”

“He'll know his father was a hero,” she promised. “Now go! Before the Tide Lords lose interest in hurting each other and start to wonder what has become of us.”

He nodded and slipped the small packet into his shirt. “Is there anything you want before Iâ¦”

Full of uncertainty, Krynan nodded and turned toward the cave's entrance, putting his back to the scores of pitiful survivors, his mother's corpse, his wife and his unborn child.

The Tarot must survive so humanity can survive,
he reminded himself as he stepped out into the hellish night.
There
will
come a time. Just not now. Not in our time.