The Indigo Pheasant: Volume Two of Longing for Yount: 2 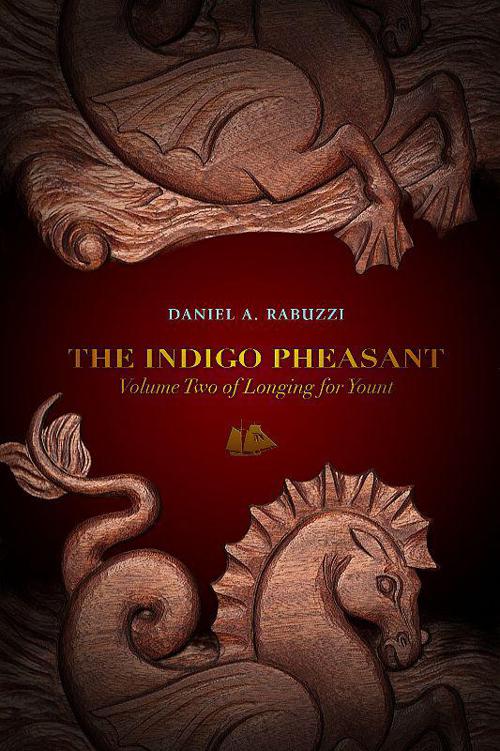 PRAISE FOR DANIEL A. RABUZZI’S
The Choir Boats: Volume 1 of Longing for Yount

“
The Choir Boats
is
Gulliver’s Travels
crossed with
The Golden Compass
and a dollop of
Pride and Prejudice
. . . An instant classic of fantasy . . .”

“(A)n auspicious debut . . . a muscular, Napoleonic-era fantasy that, like Philip Pullman’s Dark Materials series, will appeal to both adult and young adult readers.”

“(A) fantastic and deeply entertaining debut novel . . . Part steampunk adventure, part classic fantasy,
The Choir Boats
might be earmarked for young adults, but anyone to whom this sounds like a rich ride will be surprised and delighted.”

“With full flanks ahead,
The Choir Boats
charts a magical course of verve and wit through a richly detailed nineteenth-century world, spinning off little arabesques of wonderment with every turn of the page.”

“
The Choir Boats
is the most underrated young adult title of 2009, although it’s by no means limited to young readers. It’s a gorgeous and light-hearted story, chock-full of clever words, characters, surprises, and one truly spectacular twist at the end. If you’re seeking an engrossing and entirely unique world to sweep you off your feet, look no further.”

DANIEL A. RABUZZI
THE INDIGO PHEASANT
Volume Two of Longing for Yount
Illustrated by Deborah A. Mills

Edited by Samantha Beiko
Copyedited and proofread by Kate Moore

Dedicated to my wife, best friend, and creative partner: the artist Deborah A. Mills. She knows Yount in the crook of the osprey’s wing, in the grain of the wood, in the flower-glow of twilight.

Continuing the story started in
The Choir Boats (Volume I of Longing for Yount)
, by Daniel A. Rabuzzi (Toronto: Chizine Publications, 2009). For notes to the text and more information about Maggie, the McDoons and Yount, see:
www.danielarabuzzi.com
.

The Most Superbly Ludicrous Project Ever Devised

Chapter 2: Many Meetings, or,

A Long, Exact, and Serious Comedy

Chapter 3: Many Perils, or,

The Profoundest Dangers of Air and Time

A Thousand Strokes of Mean Invention

Chapter 5: A Delayed Beginning, or,

Brisk Entanglements of Wisdom and Folly

Chapter 6: An Awakening, or,

The Publication of a Marred Peace

Chapter 7: Battles Big and Small, or,

Chapter 8: A Great Singing, or,

The Fluid Signature of Joy

Also by Daniel A. Rabuzzi

“Thou, who didst put to flight

Primeval Silence, when the morning stars,

O Thou, whose word from solid darkness struck

“The fowl digs out the blade that kills it.”

“The mother that bare them saith unto them, Go your way, ye children; for I am a widow and forsaken. / I brought you up with gladness; but with sorrow and heaviness have I lost you for ye have sinned . . .”

“B
lood,” said Maggie. “I can see no other way, Mama—it needs blood. Blood to make it work properly.”

Maggie emptied the afternoon ashes in the bin at the bottom of the garden behind the Sedgewicks’s house on Archer Street by Pineapple Court. She listened to the bells tolling the end of the Lesser Feast of the Vicissitudes on a chilly day in May of 1816.

“Mama,” she said to the growing shadows on the wall. For over a year, ever since the great singing with the white girl and the brown girl that brought the ship out of Silence, Maggie had been designing a machine in her head.

“I wish there was another way, I do,” she thought. “Why blood? I fear it, I don’t want it so. But I can taste it in my mind. Aceldama in the music, blood on the tonal fields.”

A grey thrush landed on top of the wall, started his vespers.

“A musical instrument like no one has ever seen,” Maggie said, admiring the fieldfare in song as the light turned wan.

She envisioned a structure larger than a house, with wires and gears, struts and enjambments, a tabernacular engine.

She arranged in her mind levers and pipes, knobs and buttons.

“The method of fluxions will not be enough,” said Maggie, scratching out a calculation with a stick in the ash-kettle. “To build and steer this choir-boat, we will need Mr. Laplace’s celestial mechanics, Mama, and something of his latest on probability—if only I knew French better. Not neglecting the monadology either.”

Maggie had spent hours by candlelight alone in her tiny attic room dissecting a broken timepiece she got from the rag-and-bone man, contriving models made from scraps she found in refuse heaps and middens, drafting schematics and charts with pencil and a pale blue crayon. She read every book and paper on mathematics that she could convince Mrs. Sedgewick to buy or borrow for her. On her Saturday afternoons, she haunted the watchmakers’ district in Clerkenwell, and once she spent a day’s wages to visit the Mechanical Museum on Tichbourne off Haymarket, having first been denied entrance at the Adelaide National Gallery of Practical Science on the Strand (serving as it did, “only the most esteemed and genteel elements of the Publick.”)

Cécile is Dead by Georges Simenon
Overheated by Shoshanna Evers
Marianne Surrenders by James, Marco
From the Damage 1 - Opposites Attract by Denton, Jasmine, Genna
PODs by Michelle Pickett
Moonstone by Sjón
Stolen: A Novel of Romantic Suspense by Shiloh Walker
The Wolf Prince by Karen Kelley
Upsetting the Balance by Harry Turtledove
Unknown Pleasures: Inside Joy Division by Peter Hook