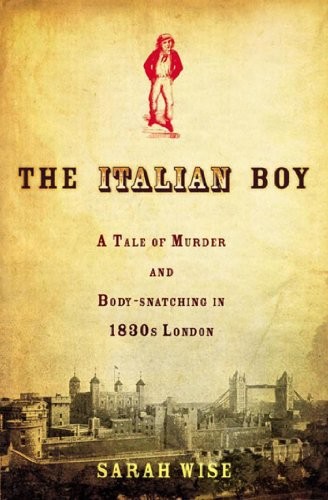 9. Whatever Has Happened to Fanny?

15. The Use of the Dead to the Living

Of the common folk that is merely bundled up in turf and brambles, the less said, the better. A poor lot, soon forgot.

Toward the end of 1831, London’s Metropolitan Police were alerted to a ghastly series of crimes. They appeared to be imitations of the notorious Burke and Hare killings in Edinburgh three years earlier, in which at least sixteen people were murdered and their bodies sold for medical dissection. I first came across the London killings—or the “Italian Boy” case, as it was known—in the course of writing a newspaper article about an East End council housing estate in Bethnal Green that had been built on the site of one of the nineteenth century’s most notorious slums. It was said that the surrounding district had been tainted for decades by the grisly crimes committed in Nova Scotia Gardens, a neighborhood of tiny, odd-looking cottages that had probably been built as homes-cum-workshops for weavers, of whom there were some fifteen thousand in the area at the start of the nineteenth century. And indeed, on investigation I learned that in the late autumn of 1831, No. 3 Nova Scotia Gardens had had infamy thrust upon it by its residents, John Bishop and Thomas Williams, and an associate, James May—all of them body snatchers, or “resurrection men,” who were charged with murdering a vagrant child.

The “London Burkers” have been eclipsed by their Edinburgh counterparts, whose story has inspired many retellings and film and stage interpretations; but in fact it was the London case, not Burke and Hare, that sped the passage of controversial legislation to make the unclaimed bodies of paupers legally available to surgeons for dissection. The Anatomy Act was passed by Parliament within ten months of the investigation into the events at Nova Scotia Gardens, heralding the beginning of the end of body snatching in Britain. But the case also revealed some extremely unpleasant aspects of life in London—a city that had increased by one-third between 1801 and 1831 to over one and a half million inhabitants, the most diverse population anywhere on earth.

The Italian Boy case occurred on one of recent history’s fault lines: the Regency was over—those years of roistering dandies and beaux, of newly gaslit streets and shopping arcades, and the heroics of the Napoleonic Wars, but also of political oppression and economic collapse, of sclerotic institutions unable to adapt to the new industrial age, of the Bloody Code and its vicious punishments for petty crimes, and of a rigid governing elite determined to avoid the violent fate of France’s ancien régime. Victoria was yet to ascend the throne, and her new age of moral certainty and love of order—the era when statistics, bureaucracy, a highly professionalized civil service, and legal and medical elites came to dominate—was not in place. Not yet. Not quite. William IV ruled from 1830 to 1837—a short reign, but a mighty turbulent one for all that. There is no mistaking the flavor, the mood, of the late 1820s and early 1830s in the writings that have survived. Everywhere is heard an insistent call for more fundamental and faster change in every aspect of British life: Parliament, the judiciary, the church, medicine, jails, schools, public and private manners and mores, architecture, city planning—all were loudly condemned as outmoded, inefficient, unworkable, “old.” Britain was seen as tottering on the edge of collapse because it could not embrace and implement change.

In this Era without a Name, the Reform Act of 1832 would see the middle classes begin to wrest power from the aristocracy and the church, and the newly enfranchised tradesmen, industrialists, and administrators strive to separate themselves from the poor. But if the common man—laborer, artisan, or pauper—had expected to benefit from the advance of democracy, he was to be badly disappointed. The 1832 act gave the vote to just one-seventh of the adult male population; the Poor Law Amendment Act of 1834 would see those who sought parish relief incarcerated in institutions that were prisons in all but name, while the living conditions of “the submerged tenth” (the phrase belongs to William Booth, founder of the Salvation Army, writing in 1890) were to remain a source of shame and disgrace to the richest nation on earth for the rest of the century.

Following the Italian Boy case in the newspapers of the day, I became curious about the type of people who had fallen into the path of the accused on their nightly prowls around the metropolis. What sort of city was London in 1831—what sort of country was England?—that children and young adults could seemingly be picked off by anyone who chose to prey on their fellow man: burkers, brothel keepers, Fagin-style procurers of pickpockets, sex offenders, press-gangs. What sort of people could simply disappear unnoticed from the city’s streets? Why, even in death, did their identities remain mysterious? How much of the history of the very poor—the destitute—has come down to us? What sorts of evidence could be trusted to give a reliable picture of their lives? What did they think of themselves?

The Italian Boy case also seemed to provide a rich archival source for learning how
non
destitute, ordinary lower-class Londoners perceived themselves, as well as those both poorer and wealthier than them, and for examining their notions of community and criminality in this strange new society that was forming in their city. The story appeared to me to be a window on the lives of the poor at a period of great change: a window that is badly damaged—opaque in places, blacked out or shattered in others—but offers a rare glimpse of those who have left little authentic trace of themselves.

Before the advent of oral history, the poor were able to tell us little about themselves directly; the very poor could tell us even less. The material remnants of their lives have largely disintegrated—the coarse paper of the broadsheets they read, the hovels they lived in—while most of their songs, stories, and sayings have passed unrecorded. The very poor are persons unknown—an enigma for the social historian, a deafening silence that roars down the centuries. Those working-class people in the 1820s and 1830s who were literate (around half of poor Londoners were) had, ordinarily, scant access to writing materials and publishers or printers, still less time to write. Committing thoughts and feelings to paper—making oneself the object of investigation and discussion—is a strange act for anyone to undertake, all the more bizarre if you have little time and money. And while a number of British working-class autobiographies have been discovered by historians, these were almost all written in later years by people who had been able to change their social status or who had become part of a larger force—labor unions or religious societies—with which their sense of self and personal history had merged.

What we know of the lives of the very poor in the first half of the nineteenth century is thus mediated by those outside their culture; we hear their stories filtered through people who, with the most sympathetic of hearts and imaginative of minds, were nevertheless strangers traveling in a strange land—even William Cobbett, even Thomas De Quincey, even Henry Mayhew. I have had to rely on such sources far more than I would have liked. The journalist, the magistrate, the prison official, the Parliamentary Select Committee member, the charity official all allow us to see the very poor over their shoulders; but they edit, paraphrase, pass comment on, and even overtly criticize the object of their interest. Despite these reservations, I still believe the greatest commentator on the London very poor remains Charles Dickens, who was able to draw on personal experience when he wrote
Oliver Twist
in 1837–38. As a twelve-year-old left to fend for himself in central London, he had felt himself in danger of falling into destitution; he had observed the vagrant young of Covent Garden at first hand, and with his creation of Jo, the street-crossing sweeper in
Bleak House
(1852–53), he managed to climb inside the mind of one of the hordes of urban outcast children. For this reason, Dickens weaves in and out of the following pages.

Researching this book took me down many blind alleys as I tried to piece together the criminal careers of John Bishop, Thomas Williams, James May, and other London body snatchers. Official records were not obliged to be kept of cases heard in magistrates’ courts (which is where anyone arrested for possession of an illegally disinterred body would be examined), and justices of the peace habitually failed to supply the higher courts with written details of those they had convicted—an oversight that was as infuriating to the Home Office of the day as it is to the modern historian. Body-snatching cases did make it into the national newspapers, but the coverage of the hearings is uneven at best; worse still, most snatchers had aliases—some of them had several—and it was not always clear who, exactly, was on trial. (To compound the researcher’s problem, the 1820s and 1830s registers of the London jails where snatchers were confined if convicted—primarily Coldbath Fields Prison and Clerkenwell New Prison—have not, for the most part, survived.) In an age when guilt was often established by eyewitness evidence, and sentences decided on the notion of good or bad repute, it was in the criminal’s interest to keep his or her identity as fluid as possible. As one penal reform campaigner wrote in despair: “No man goes into Newgate twice with the same name, trade, or place of nativity.” So Bishop, Williams, and May may well be lurking in the records under assumed names.

Several other things spoke out from the archive sources: the deference shown by many in the case toward the judiciary and other authority figures; the central role of drink in the lives of the protagonists; the increasing tendency in the city toward the identification of its citizens—badges and uniforms, registers, licenses, and permits were all coming into place or were expected soon; allied to this, the growing urge to tie things down, to lash people to their “proper” place and put a stop to urban nomadism; and finally, the sense that, in these years before the laying of London’s great drains, people were living in a giant cesspit—picking their way between fecal matter and pools of urine. Physically this was a city quite different from today’s capital; many of the most famous structures and the broadest, most traveled roads had yet to be constructed; populous, densely built areas were yet to be razed. To those in authority in 1831, London’s topography—its sinuous streets and unlit warrens—connived at criminality: there were frequent calls for the lanes and alleys to be illuminated, straightened out, or flattened altogether. Nova Scotia Gardens itself was so obscure a destination its name never appeared on any map. The Italian Boy case reminded city dwellers, rich and poor, that at the heart of London—a city that felt itself to be on the brink of reform and “modernization”—lay unknown, unknowable mysteries.

The action in this book took place in a number of central London districts, all within a radius of two miles of the area known as the City. Also known as the Square Mile, the City was and remains an administrative enclave within Greater London. It abuts the poor East End district of Whitechapel; to the west it is bordered by Holborn, to the north by St. Luke’s, Old Street, and to the south by the river Thames.