Read The Keeper of Hands Online

The Keeper of Hands 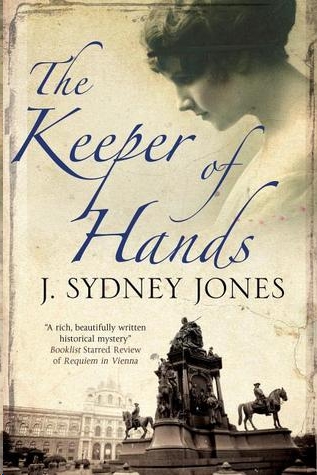 Recent Titles in this series by J Sydney Jones

Recent Titles in this series by J Sydney Jones

THE KEEPER OF HANDS

First published in Great Britain and the USA 2013 by

The right of J. Sydney Jones to be identified as the author of this work has been asserted in accordance with the Copyright, Designs & Patents Act 1988.

The keeper of hands.

S
ometimes he fancied himself a character from one of Schnitzler’s early dramas: Anatol, the Lothario who is ever on the prowl for a sweet young thing.

He sported a thin moustache and the neatly oiled and brushed hair of such a womanizer, carried a walking stick, and dressed to the nines even on days when he did not feel particularly compelled to join the hunt.

A fellow has to keep up appearances, even if there is no one to appreciate the effort.

Today, however, there most definitely was a woman to impress. It was May Day – and a bright and cheery day it was, he thought.

He had seen her throwing flowers to those red-nosed rowdies carrying socialist banners at the head of the parade. Silly young thing, she could hardly understand the politics she was thus espousing. He would take her in hand, educate her in the ways of the world, and get that socialist claptrap out of her mind.

The horse-chestnut trees were in full bloom along the Prater-Allee, their white-and-pink blossoms dazzling. Even the red sashes the paraders wore diagonally across their chests were luminescent today.

A fine day for the chase.

She was exactly the sort he fancied: petite, with luxuriant black ringlets spilling out under her hat. Her face was all expectation, a full-lipped mouth making an ‘O’, eyes open wide. Her nose was a pixyish thing, tiny and twitching like a small forest creature sniffing its way home.

He gave her a name: Gretchen. It was as good as any other, and Goethe might well approve. Gretchen’s hands, holding the last of the carnations, were pink and chapped. A worker then; it was clearly her special day off.

He inched his way through the crowds to the kerbside, next to his chosen one. He could almost smell her now, feel the warmth coming from her young, ripe body.

It was as if this Gretchen sensed his presence. She turned slowly, and her face in silhouette was a thing of beauty – tiny ears like mollusc shells, small creases at her neck as she rotated her head.

Yes, he decided. She would be his before the day was out.

Her eyes fixed on him.

‘Back off, will you?’ she said in a croaking voice full of working-class coarseness and rebuke.

In the end, he settled for a woman not quite so lovely as his Gretchen, but fetching just the same. A few years past her prime, perhaps, but then his blood was up and the parade was winding down. He had to be quick about it or miss his chance.

He admired her hat and they struck up a conversation; he bought her an ice, told her of his travels and his important work. Actually, though he did travel a good deal, he had no work, important or otherwise. No need to, with his family annuity.

Anna was her name, out for the day from Brigittenau. Due back by five.

Yes, there was time, but not enough for subtlety and play.

He steered her towards the forested section of the Prater, taking her on a seeming nature walk, indicating a chestnut tree here, a linden there. He raised a manicured forefinger at a plover flying overhead; nodded at a delicate St John’s wort underfoot, its yellow flower warding off evil.

Little good that would do his Anna, he thought.

They had left the paths now, and quite suddenly he wrapped his arms around her and kissed her on the mouth. She struggled for a moment.

‘What sort of girl do you think I am?’ she said with what he knew to be feigned outrage.

‘This sort,’ he said, giving her bottom a pinch.

That made her giggle; a bit of her spittle landed on his lower lip.

They were well out of sight of anyone, and he hurriedly tugged off his jacket, spreading it on the ground.

But she did not reciprocate.

‘Quickly,’ he urged. Then he added more coaxingly, ‘My sweet dove.’

Looking at her face, he realized that she had no intention of pleasing him. In fact, she was about to scream; he saw it building on her face like an infant that has just injured itself. She was not looking at him. No; her eyes were diverted to his left. He followed the glance. And then, as her scream tore through the idyllic softness of the day, he saw it, too.

There, thrust under a low bit of brush, was the body of a young woman, the sort to whom he was normally attracted. She was quite naked, her limbs and torso of a startling whiteness in contrast to the deep woodland greens all around. The right arm was pinned under the body, the left thrown up over the head as if in abandon.

By the look of the purple bruising around her throat and the thick knot of tongue poking out of her mouth, she was dead.

Only to himself did he dare think of this smallholding in the Vienna Woods as a manorial estate. Were he to use the word demesne with his wife, Berthe, to describe their summer home, she would of course voice full-throated laughter.

Yet, when she referred to it as their ‘cottage’, Werthen never thought of chiding her. Cottage was the term given to elegant villas on the edges of the woods by Viennese who identified too much with British understatement.

So, alone behind the old farmhouse in the village of Laab im Walde, Werthen surveyed his ‘demesne’, appreciating in particular the white and violet lilacs tumbling in natural bouquets of bloom in the overgrown bushes to the rear of the farmhouse. Their scent filled the air though he was a good thirty metres from them.

Behind him, at the limits of his property, which locals called simply ‘the farm’, he heard the chuffing exertions of Stein, finishing the rolling of the last section of fresh brown earth. A small man, Stein was strong as a mule, pushing the large roller in front of him over the tilled ground. He would plant the seed before leaving.

Stein was steward of Hohelände, Werthen’s family estate in Lower Austria. In fact, this tennis court was the gift of Emile von Werthen, a show of approval for his son’s purchase of a country home. Werthen’s father had sent for special rye-grass seed from the All England Lawn Tennis Club and had also dispatched the invaluable Stein to create the court, or at least see to its planting.

Of course, Werthen’s father had never asked if such a gift might be appreciated, or indeed if it were even appropriate. Stein had merely showed up at Werthen’s door earlier in the week, his wagon full of hoes, shovels, pick axes, measuring sticks and twine, and the large roller. He’d even brought along a tent to camp out, but Werthen would not hear of that, establishing him in the spare bedroom in the farmhouse instead.

It was as much an embarrassment for Stein as for Werthen that his arrival was unannounced.

Werthen, not one for organized sport, intended to let the grass grow knee deep on the prospective court, to become a wild part of nature again once Stein departed.

A hawk overhead caught Werthen’s attention, and then looking down the lane leading to the farmhouse he saw a man approaching. He was a slight figure, dressed all in white on this warm late-spring day. He wore a straw boater and carried a walking stick, using it like a baton as he strolled down the lane – as if keeping time to music. As the man drew nearer, Werthen could hear that he was, indeed, whistling as he walked, at one moment a tuneless mimicry of birdsong, then abruptly transformed to a snippet from Wagner and then one from Mozart.

Another figure now came into view, his daughter, young Frieda, toddling towards the stranger on sturdy legs, with Berthe close behind her. The child was dressed in a white pinafore, but went hatless in the strong sunshine. Her auburn curls were below her ears now.

It was as if his daughter knew this stranger, for she picked up speed on tumbling legs, staggering downhill. She was pulling away from Berthe, who seemed to be amused by this display of independence. As Frieda neared the man in white, Werthen felt a sudden and inexplicable panic. What did he know of this man? What if he were to sweep up Frieda in one arm and abscond with her?

He dropped the secateurs he was carrying and began running round the side of the farmhouse, built in a square around a central courtyard. He wanted to call out to Berthe, to warn her, but he could not find voice. The man in the linen suit was leaning down to one knee, actually beckoning to Frieda, who began giggling insanely as she tottered towards him.

In desperation Werthen leaped over a watering can, catapulted himself over the fence, and found himself face to face with Berthe, who was startled at his arrival.

‘What are you on about?’ she said as he stood panting in front of her, gesticulating towards Frieda.

God! He had forgotten.

He looked at his daughter and now realized that she was not attracted to the man in white, the journalist Felix Salten, at all. Nor was Salten beckoning to Frieda. Both of them were trying to gain the attention of a long-haired dachshund that was happily chasing butterflies and cavorting among the red poppies, pale-blue liverwort and yellow sassafras in the fields.

Salten took three cubes of sugar in his tea, watching with a keen parental eye the antics of Mimi, his beloved dachshund, playing on the flagstones of the kitchen floor with Frieda.

‘I do appreciate you letting me meet you like this,’ the journalist said.

‘Not at all,’ Werthen said, though somewhat abstractedly. It was his habit to try to determine the nature of the commission that prospective clients were bringing him, and that was the mental exercise he set himself now.

Theater critic of the
Wiener Allgemeinen Zeitung,
Salten could have earned himself a number of enemies for the biting satire of his reviews. In fact, several years back he had got into a famous altercation with Karl Kraus at the Café Central that led to Salten giving the other journalist a cuff on the ear. A threatening letter, then?

Raising Steam by Terry Pratchett
Put on Your Crown by Queen Latifah
Unfriending My Ex: And Other Things I'll Never Do by Kim Stolz
One Prayer Away by Kendra Norman-Bellamy
The Birdwatcher by William Shaw
The Veiled Heart (The Velvet Basement Book 1) by Elsa Holland
Terminal 9 by Patricia H. Rushford
Dragonfly Falling by Adrian Tchaikovsky
Power Systems by Noam Chomsky
The Rifter's Covenant by Sherwood Smith, Dave Trowbridge