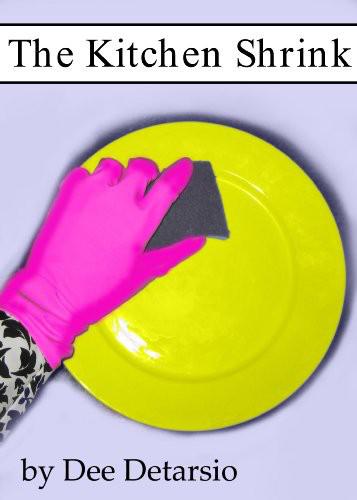 Editorial Reviews for debut novel
The Scent of Jade
:

The Scent of Jade has enjoyed a fast-growing, international fan base. Clever, quirky, and multi-talented, ebook novelist Dee DeTarsio is definitely a new author you want to friend, and then you can say, you knew her when... The novel simply reels off in your mind with its quirky characters, exotic location, a legendary idol, and more. —The Divining Wand

Perfect escape, like watching a romantic action movie with a sarcastic friend. At times the heroine fell apart; then she rocked her best Angelina Jolie, with humor, action and a hint of sexiness. —Unabridged Chick

San Diego Novelist Romances UK. The Scent of Jade has a killer, Hollywood logline: Romancing the Stone meets Survivor. The author takes a page from her world-traveling protagonist Julie Fraser and has connected with Brit romance fans. —Mediabistro

From TV writer Dee DeTarsio, comes a new novel, featuring the humor, vulnerability, honesty and flaws of a suburban heroine...

If your life is a mess, your house could probably use a makeover, too. Welcome to the behind-the-scenes world of reality TV in
The Kitchen Shrink
:

“My kids smoke dope, my ex is one,

I said ‘nope' when I wanted to run…

Into your arms…And feel your lucky charms…”

When did Lisby Shaw’s life turn into a country music song? Probably when her best friend signed her up for the debut of the new reality TV show,
The Kitchen Shrink
, for the ultimate life and home makeover! Unable to squirm out of this “it will be fun” opportunity, Lisby tries to juggle her upstairs-behind-the-scenes-life with her downstairs-in-front-of-the-camera persona, where everything she says and does can and will be used against her.

Hopefully, the show doesn't find out about her fling with that hunky carpenter. Or that she and her friend smoked hootch she found in her daughter's room. Lisby cannot believe what a freak show her life has become. At least no one knows about her crush on Sam, Sam, the Cameraman…

Lisby tries to find her way as the TV cameras capture her every move, zooming in on drama with her kids, her ex, her mom and her best friend. Stay tuned for Lisby’s extreme close-up as she becomes a jilted laughingstock on national TV. All is lost…or is it?

“What are you going to be for Halloween?” Daria asked me, looking like visions of sexy nurses and dominatrixes were dancing in her head. She’s my best friend, the glamorous yin to my granola yang.

“Poor sport.” She pouted, posing in front of my hall mirror, restriping her newly Restylane inflated lips with a cherry-red gloss.

“Whore sport,” I tried to tease her.

“Takes one to know one.”

“You wish,” she agreed. Turning to me, she sucked her tongue over her teeth. “Come on, Lisby. You’ve been such a grumpy dump.”

“Thanks. Call me names. That’ll make me feel better.”

“Hogan!” She waggled her finger at me, trying to draw out a smile that usually worked when she bellowed out a bad mouthful of a Germanic-throat-clearing Hoooo-gan. It was an absurd reminder of one of the reasons why I got divorced in the first place. My husband (ex now) is a functioning alcoholic. Well, ‘functioning’ is such a strong word. He never beat me, never drank and drove, liked our kids well enough and was gainfully employed as an executive producer at the NBC affiliate in San Diego. But at last year’s Oktoberfest, he drank so much that when he and his buddy Jason clanked beer steins and they shattered, he picked up a roundish chard of glass and nestled it over his right eye, à la Colonel Clink, from Hogan’s Heroes. He was hollering “Hogan” at his buddy Jason while a table of real Germans pointed at him in horror.

“Tell me again how the Germans couldn’t remember the English word for ‘eye’,” Daria interrupted my thoughts.

“Seeing how Brett was totally oblivious of the blood gushing off his cheek,” I shook my head, “they finally managed to scream, ‘your ocular orbit’!”

I finished in an Arnold Schwarzenegger drawl.

Daria laughed like it was the first time she ever heard that story.

I had just been coming back with bratwurst when I heard him yell Hoooogan. I saw the blood on my husband’s face pouring from the bottom of his monocle, and knew I was done with him. Over and out, as Hogan, or was it Schultzie? would have said. I let Jason get him to First-Aid while I drove my sober self home and called an attorney. It was high time too, at least that’s what I later imagined his girlfriend, a twenty-something intern from San Diego State must have thought. As the stone cold sober one in the so-called party of my marriage, I don’t know where the love went, but I could pretty much pinpoint when the dislike began.

Again, Daria interrupted my wallowing. “Lisby, listen up. You did good. It’s been hard, but it was high time.”

“Time for what?” Yuck. I’d heard my tone, and even Eeyore sounded more upbeat. Compared to me Eeyore sounded like he had a heapin’ helpful handful of Xanax.

“Time to snap out of it,” Daria said.

“Oh, and now you’re quoting Mary Engelbreit to me?”

Just then my cell phone rang. “Hello?” I turned my back on my nosy friend. “What kind?” I lowered my voice into the slim silver lifeline that never left my side. “OK.”

Daria smirked at me. She has the ears of a bat. When she wants to. “Are you kidding me?”

“What?” I couldn’t meet her gaze and headed into the kitchen.

“Who was that?” she asked with the superiority of someone who knew they knew the answer.

“He wants some ice cream,” I said, pulling a tub of chocolate swirl out of the freezer.

“And what?” I slammed the freezer door shut. It didn’t bang nearly as loud as I wanted it to.

“And just where is our royal hiney?”

“Upstairs in his bedroom,” I mumbled, trying to jam a big soup spoon into the frozen swirls, wishing she’d be a good friend and just drop it. She brought to the party the smug wisdom of someone who didn’t have kids.

“So, your seventeen year old son, who has no known broken limbs, calls you from upstairs in his own house, to place an order for ice cream?”

My shoulders shrugged. And let she who is without kids cast the first stone.

For the first time that day, I laughed. “I know,” realizing how absurd it was and how I’d make fun of some other lame mom for doing the same thing.

Daria tsk tsk-ed her head at me as she opened a packet of pretzel M&Ms.

“I’m creating a terrible future husband for some poor girl. But I can’t help it.”

“How about, ‘hey, lard ass, get your own ice cream and while you’re at it serve me and my friend up a couple of bowlfuls’.”

“While some days that would feel really good to say, A: I would never call any of my kids ‘lard ass’,” I automatically sucked in my own stomach, legacy of my crazy-thin and thin-crazed mother, “and B: he’s taken this divorce pretty hard but at least he’s talking to me.”

“Talking, ordering,” she said. “Potato, potahto.” Daria chomped the pretzelicious pellets. “These are really good. I’m so glad you came to your senses and stopped buying candy that you don’t like for Halloween,” she bared her chocolate swirled smile at me. “Remember last year, the year of the Red Hots and Tootsie Rolls?” She shook her head.

“Yeah, but it’s not even Halloween and I’ve already had to buy two more bags.” I rubbed my stomach. “Curses! Low rise jeans. I’m ready to buy those jeans that are really pajama bottoms. Have you seen those on TV?”

Daria managed to shake her head, roll her eyes and pity me using only about two whole facial muscles, but I got the message, loud and clear.

“Don’t think I’m not tempted,” I told her. “They’re comfy, stretchy pajama pants,” I megaphoned my hands around my mouth, “THAT LOOK JUST LIKE JEANS! Imagine the possibilities.”

“I am deleting that image from my mind and scouring my retinas as we speak. Besides, you’re not ready to totally give up and order, from TV, in the next ten minutes, some ace-bandage-material-painted-to-look-like-jeans ensemble just yet. Who buys those things?” She ate a few more M&Ms. “Need I remind you? WWJD? What would Jane do?”

Jane Fonda is Daria’s go-to guru for everything. If Jane wouldn’t eat it, buy it, try it, wear it or share it, all bets were off. “Jane says no to jammie jeans.”

“It is kind of a genius idea,” I said, whiffing my own defense. I knew I shouldn’t have brought it up. Now I could expect teasing from Daria for the next few months, all about my desire to look stylish and comfortable at the same time. Is that too much to ask?

Daria held up her hand. “Do not even go into your wacky quest for style and comfort,” she warned me. “How many times do I have to tell you, you’ve got to stay in tune with the times.”

“That’s what my great-grandmother always used to say,” I said, agreeing with her.

“You did not make that up. Everybody says that.”

“But, not everybody listens,” Daria said. “You look great,” said my great and good friend, reminding me again why I loved her so. Even after the demise of my happily-ever-after I still wished she could find her Prince Charming. I met Daria years ago when I had stormed my way into my husband’s office downtown, only to have to ‘cool my ugly heels’ in the waiting room. I didn’t know who she was as she passed through the reception area and beamed a smile my way.

“I like your shoes,” I had told her, feeling all self-conscious about my two-years-out-of style black ‘soccer mom’ slip-ons.

“Thanks,” Daria had answered, pointing her toe and swiveling her ankle. “Ardy Forelle.”

“Ardy Forelle? Wow. Where’s that? I usually just hit the sales,” I said, curling my own toes and scootching my feet under the chair, trying to act like I was sitting properly.

Thus, our friendship was born. Especially after she offered me the last Hostess Cupcake in the package she had in her hands. You never could have guessed by looking at what she ate, but Daria was a Registered Dietitian with her own TV show, “Good Mood Food.” She may preach nutrition but Daria swung the other way, practicing her own unique RDA food pyramid, which included Ruffles, Doritos and Assorted chocolate.

Puzzle of the Pepper Tree by Stuart Palmer
The End of the Game by Sheri S. Tepper
Genie and Other Weird Tales by Killip, Alan
War and Watermelon by Rich Wallace
Taken by Two by Sam J. D. Hunt
Best Friends With the Billionaire (The Rochesters) by Coleen Kwan
Christmas Wishes by Kiyono, Patricia
Her Stepbrothers Are Aliens by Trinity Blacio
The Game of Love by Jeanette Murray
The Chocolate Cat Caper by Joanna Carl